Shoot ’em ups have a rich, long history, perhaps one of the longest in all of gaming. While Pong and Pac-Man were the first for many, Galaga was right in the mix as well, and with the advent of easy to manage digital marketplaces we’re seeing a resurgence of some of those classic games right here in the mobile space. Cave pretty much opened the shmup floodgates after some stragglers at the start of the Android and iOS movement, but there’s plenty of other competitors vying for attention as well. That includes Psikyo, who developed the Gunbird series way back in 1998 on arcades (and eventually the Dreamcast). And here we are 18 years later with a mobile edition. Flaws and all, it’s a pretty fantastic series of events. 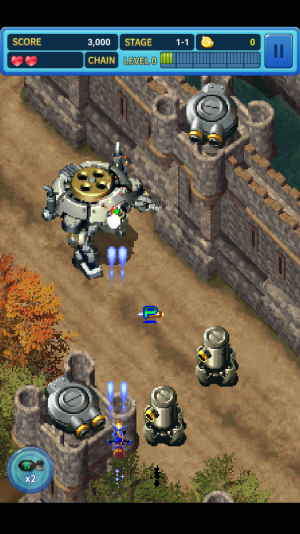 As a hardcore game that skews towards throwing tons of bullets on-screen at once (though not nearly as much as a true danmaku, or, bullet hell title, like many of Cave’s works), this isn’t something you can merely pick up and expect to master. In fact, there’s far more packed in to alienate you beyond that stage. This is as wacky of an anime game as you’re going to get, as the cast is comprised of characters like the son of Dracula, a young witch who wished to reverse her aging process, and a self-conscious magic carpet rider.

It’s all old school but I like it that way. Backdrops have cheering civilians populating them (think Street Fighter stages), it’s easy to tell the difference between friendly and enemy fire, and the controls (which are drag and touch, with two easy charge shot and bomb buttons on the side) are simplistic. At this point playing shmups on a touch interface has become a second nature, and although I’ll always prefer the precision of a d-pad, I’d gladly trade a pad any day to play games that are exclusive to the mobile space.

There’s a certain charm to pixel art that endures the test of time. It has the penchant for looking washed out if it’s blown up at a high, non-native resolution like a current generation console or PC, but a mobile device serves as a pocket timewarp of sorts to decades past, with a near lossless level of fidelity.  It’s a great excuse to show off the game’s many details like the aforementioned little extras in each level or the absurd design of some of the bosses. It’s colorful too, with a wide array of level themes and character and enemy models. Odds are you won’t get bored with something new waiting for you at every turn. 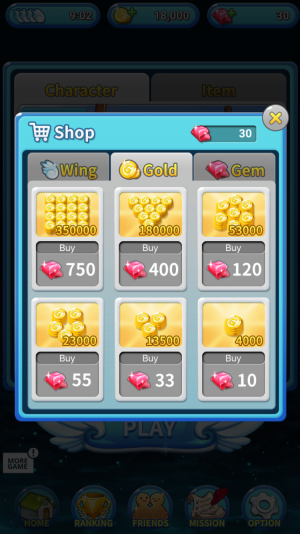 The main issue with Gunbird 2 is that it’s full of freemium “bells and whistles" that are more of a hindrance than an upgrade. You’ve seen it all before, multiple muddled currencies to confuse players, daily login bonuses, specific unlock requirements. It’s all there, and oddly meant to squeeze more time out of the sponge than there really is. Because with shmup fans, they’re either going to like the game and keep playing it for their own reward of a high score, or abandon it entirely. Extra items like bomb slots and more bombs is also a similar poor idea.

There really isn’t a middle-ground here given how niche the genre is, and adding in all this fluff is only going to scare away more potential people from experiencing this forgotten classic. Yes, even energy makes an appearance, and with a score-centric game it’s really puzzling.  I have to give it to them though as the main draw — the characters — can mostly be unlocked through traditional, free means.

In an effort to get it up on the western app store it was also hastily translated, so the barriers to entry aren’t ideal either. It’s not unplayable by any means as all of the menus are technically readable, it just won’t convey all the nuances you might need to excel tot he next level.

You’ll know if Gunbird 2 is for you right away. It’s saddening to see a relic of the past coated in so much crust when it had the opportunity to shine as a premium purchase, but it’s something that just about every shmup fan needs to experience at some point — even if it’s just for one clear.