Have you played Lifeline? It came out in 2015 and had a very clever concept: it turned one of the primary purposes of a phone – sending and receiving messages – into a game. The game had you talking to a survivor of a spaceship crash and you couldn’t do anything but advise him, all the while trying to keep him alive. At its core, Lifeline was a choose-your-own-adventure game, but its use of “real-time" messaging as the main game mechanic made the game feel more like a real-life communication rather than a spreadsheet of choices and consequences. As much as it tried to imitate real life, though, Lifeline was a bit too stilted, the communication never really tricking you into believing that the person on the other side of the fictional line was a real human being. 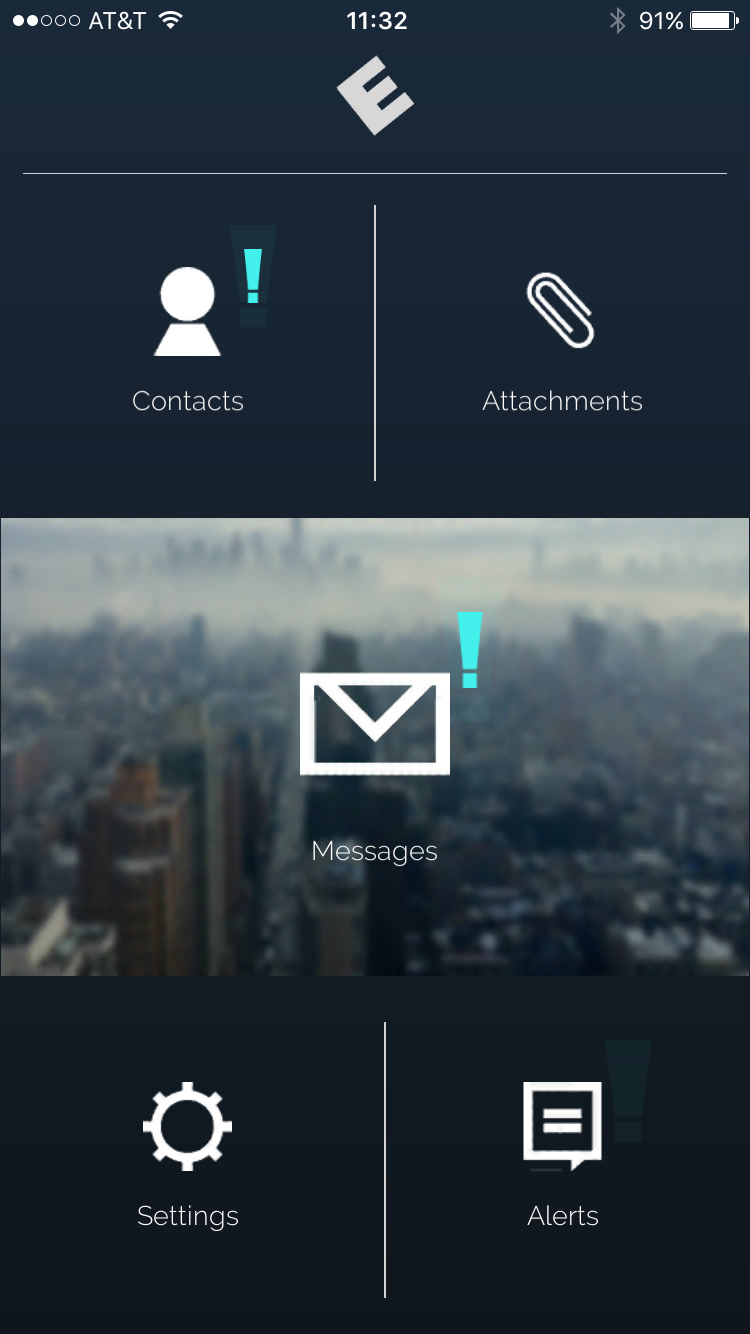 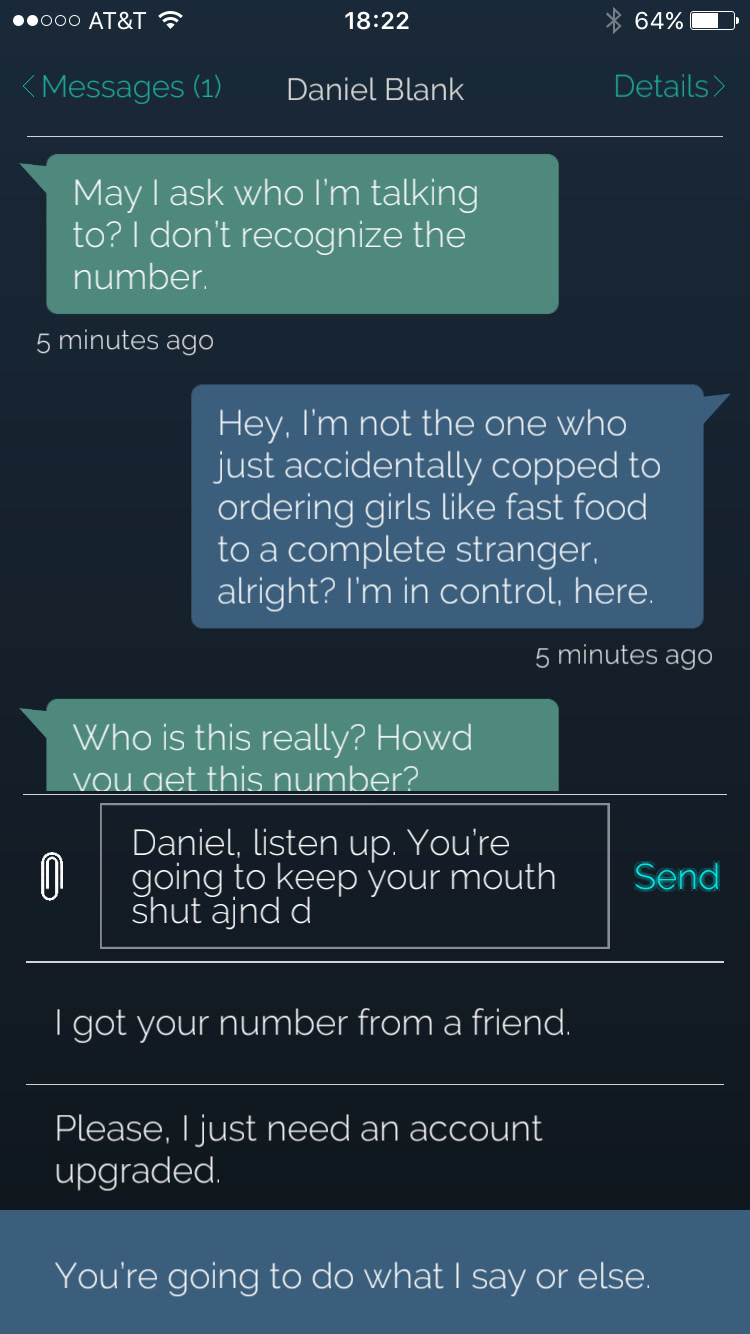 Mr. Robot: 1.51exfilitrati0n ($2.99) uses a similar gimmick to Lifeline; you find a phone on the ground that uses a new messaging app, and then you use the capabilities of that app to communicate with people and perform all kinds of – mostly-insidious – tasks. Where Mr. Robot stands out, though, is in the way it succeeds in making the player suspend disbelief. Communicating with the rest of the “people" in the game feels like talking to real people, the kind that use internet-speak fluently and the kind you probably chat with every day.

Through this “faithful" simulation of contemporary communication and through some other simple – yet clever – tricks, Mr. Robot managed to draw me into its paranoid world, even though – or maybe because – it barely gives any background info on the world I was inhabiting other than a quick video at the start of the game. And, for better or worse, it made the life of a hacker look dangerous yet enticing, intriguing yet morally reprehensible, disgusting yet quite fun.

Before talking further about the game, a note about spoilers. Although I’ve watched the first season of Mr. Robot the TV show, I’ll be talking solely about the game in this review and using information contained within the game. So, if you haven’t watched the show yet and don’t want it spoiled, have no worries; this is a spoiler-safe space when it comes to the show, but expect plenty of spoilers when it comes to the game’s plot. So, the game starts with an innocent-enough premise; you find a phone on the ground and since no one’s around to claim it, you pick it up. The phone has the E-Corp messaging app on it – which by the way made me miss IM apps of the past before they become the bloated-monsters they currently are – and for the rest of the game, you use that app to communicate with others and to send and receive files. 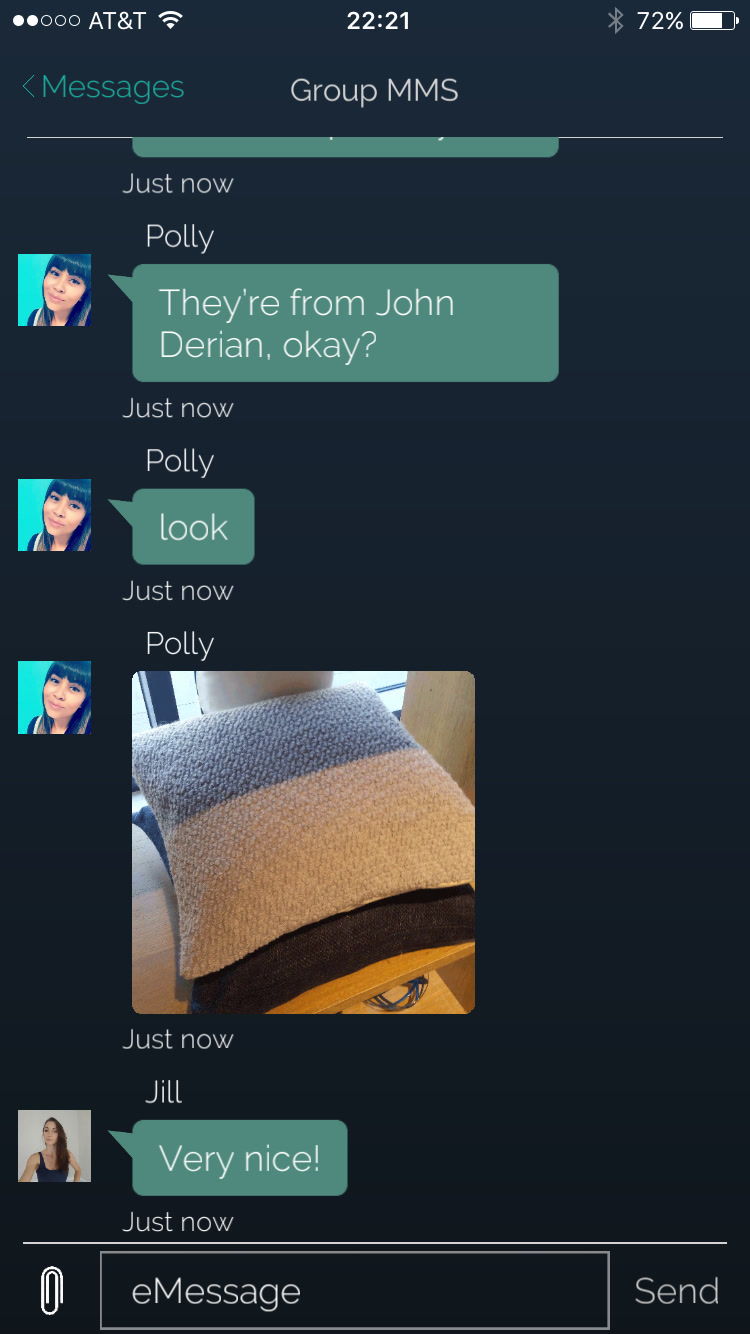 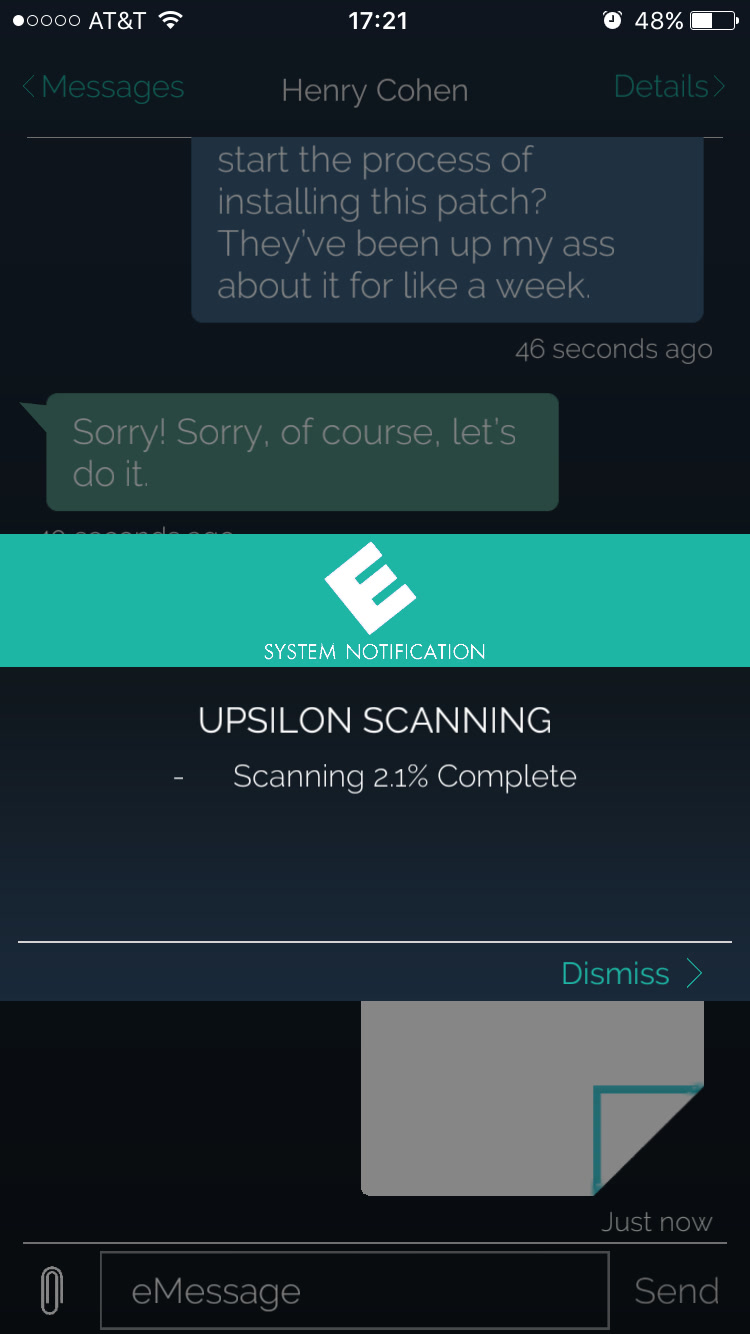 The E-Corp app, which is also the game’s UI, is split into Messages, Contacts, Attachments, Alerts, and Settings. The UI cleverly blends in-game elements, like the Messages tab, with the Settings tab that actually lets you change the game’s settings like font size etc. This is one of the many ways the game manages to make the game feel “real" and the E-Corp app UI feel like an actual app on your phone rather than the UI of a choose-your-own-adventure game. Add to that little things like having to agree to E-Corp’s Terms of Use when you start the game, and you can see how it creates an engrossing world from early on.

In an attempt to make the game feel like real life, Mr. Robot uses the notification system of your phone as well as frequently making you wait for quite some time between notifications and in-game events. This mechanic works well overall, but the badge app icon is stuck to 1 throughout the game, which will result in you having to pop in and out of the app more often than you should just to check whether something is indeed happening or not. On the other hand, broken notifications do make the game feel more realistic, although I’m sure this wasn’t the developers’ intention.

And what do you do once in-game? For about 80% of the time, you exchange messages with people, picking the answer you want to send to others and, in the process, changing the game’s narrative. Outside messaging, you get to send and receive images and various other files as well as study images for various nefarious purposes. Despite the game giving you a limited amount of things to do outside talking to people, I never felt bored because the writing is really top notch and made my conversations with other characters interesting, realistic, and very often fun. 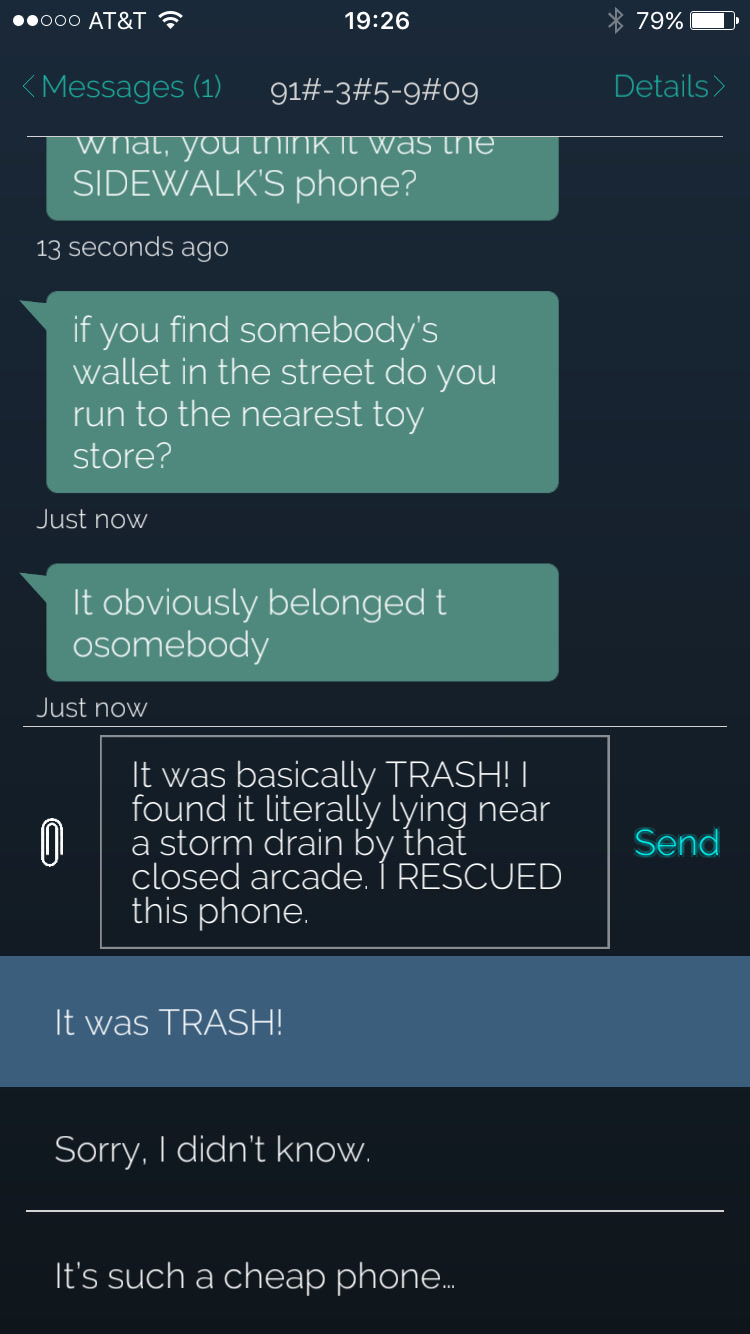 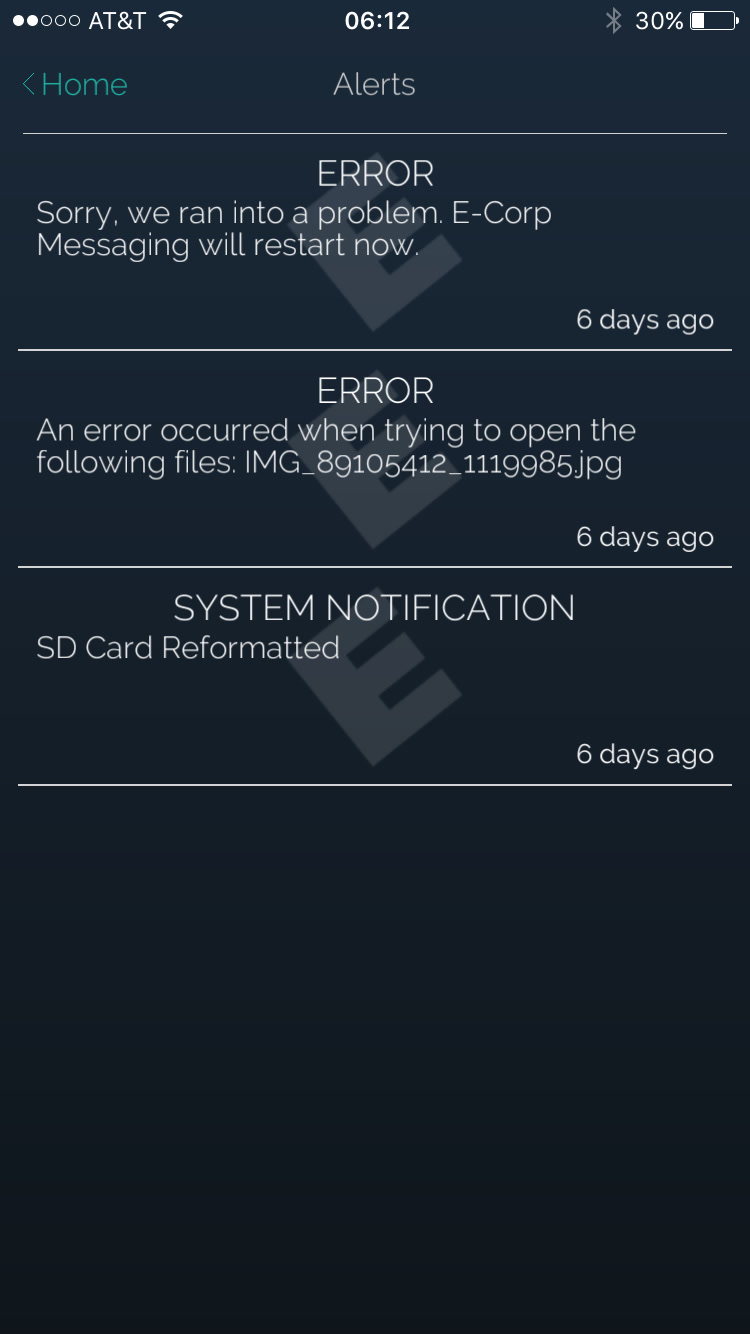 Speaking of those conversations, Mr. Robot‘s writers deserve an award purely on how well they managed to emulate how people speak online. There’s plenty of often-unnecessary capital letters and words in all caps, lots of typos (and frequent attempts at fixing those typos), a good amount of appropriately-used swear words, even an extremely challenging discussion with a teenager who writes in teenage-speak that felt real enough to make me want to shout at him to learn how to use proper English. And, in what I thought was a very clever move, in addition to those conversations that propel the narrative forward, Mr. Robot also includes a bunch of social interactions between your character and a bunch of others that do nothing for the narrative but did wonders in helping me suspend my disbelief. For instance, there’s a whole discussion thread between a group of friends (who think I’m their friend) that perfectly emulates the aimlessness of group chats while at the same time doing nothing for the narrative.

Same goes for a bunch of spam messages I received throughout the game, messages that did nothing to help me become a better hacker but, once more, really made the world I inhabited feel ever so slightly more real. The word “immersion" is quite overused in discussions of games, but all the side conversations, the ads, the spam, worked in unison to make Mr. Robot a much more immersive experience than it would have been otherwise. And that’s probably the developers’ greatest achievement in my eyes.

The great quality of all the things that happen in the margins of the main narrative would be useless if the actual narrative of the game was a dud. Fortunately, Mr. Robot‘s plot delivers, putting you into the shoes of an amateur hacker while offering a simplistic-yet-faithful view of how easy it’s become to hack people’s lives now that everything we have and everything we are is online. The moment I picked up that phone at the start of the game, I found myself in the middle of a hacking scheme that revolved around finding a way into Steel Mountain’s climate control system (if you’ve watched the show, you’ll know the reason behind this hack). In order to get into Steel Mountain, I had to help the owner of the phone I found as well as another, secretive person hack into AirDream – the company running Steel Mountain’s climate control system – through the use of subterfuge and trickery.

The way you go about hacking in Mr. Robot is as subtle as it is effective; there are no frantic minigames, no race against time. In its most spectacular, Mr. Robot‘s hacking is all about using information against people and preying on their weaknesses, at its most subtle, it’s all about impersonating others. I know from reading up on various hacking incidents (and not from personal experience, thankfully) that most hackers operate just like your character in Mr. Robot, using deception to crawl inside your digital life from the most insecure gateway rather than go all cyberwarfare on you. So, in that sense Mr. Robot is quite realistic and, therefore, quite believable.

Mr. Robot is a very entertaining choose-your-own-adventure game and a great example of how to create believable worlds. At the same time, it’s the perfect engine for paranoia and will probably make you rethink most of your internet behavior and practices. I enjoyed waiting for that next notification, that next weird twist in the tale. Even though I was barely more than a cog in the machine, I felt powerful enough to take on the whole world, which was unsettling in its own way because real-life hackers are definitely more capable than my character was. Now excuse me, I have to go back to changing all my passwords and ensuring that my illusion of online security remains intact.