Gamebooks based on the works of William Shakespeare are so hot right now. Well, okay, there’s really just Ryan North’s To Be Or Not To Be ($6.99), Ryan North’s Romeo And/Or Juliet, and now this one, but that’s enough for me to call it a trend. A delightful, wonderful trend. But lest you think Choice of Games is merely riding the tailcoats of those previous books with A Midsummer Night’s Choice (Free), let me assure you that this is an entirely different sort of animal. While North’s gamebooks take the familiar situations and characters and give the reader the chance to move the story in wildly different direction, A Midsummer Night’s Choice tells an almost entirely original tale, albeit with its fair share of nods to Shakespeare’s famous play.

So while you won’t be able to follow Puck and find out just how he ended up joining Alpha Flight, you do get a whimsical, sometimes absurd tale of romance, faeries, and characters showing up in the wrong places at the most entertaining possible times. The hero of this tale is the heir to an ailing duke, who aims to solve the problems of his duchy by marrying you off. Your character is having none of that, and makes a dash into the nearby woods to try to escape that fate worse than death. With the duke and his men in hot pursuit, and the forest full of the unexpected, things get very complicated in a hurry. 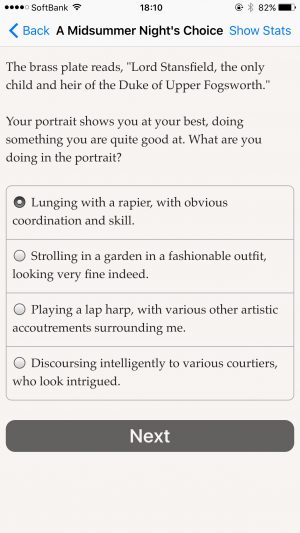 If you’ve played any of the other adventures published by Choice of Games, the nuts and bolts will be quite familiar to you. Your character can be a man or a woman of any sexual orientation you prefer, with the details of the other characters in the book being filled out based on how your main character is set up. The game has multiple endings depending on who you choose to romance, who you choose to ally with, and so on. Mechanically speaking, this is a pretty straightforward example of a ChoiceScript game. The choices you make will cause you to gain or lose points in various stats and relationships, with the success of future choices often being contingent on having a certain score in one parameter or another.

Like many gamebooks, A Midsummer Night’s Choice is more linear than it appears to be. But like the better gamebooks out there, you probably won’t notice this until you go back through and play through other routes. Even when the story forces you along a particular path, sometimes in seemingly direct violation of your intended choice, the writing covers the tracks well. The absurd setting and playful tone of the text make fine excuses for things spinning out of your character’s control, and you’ll often be too busy smiling at the outcome to get too bothered by it. Also helpful is that for however difficult it is to swing the main plot too far off course, you do get a lot of sway on the particulars. There are multiple potential romantic partners, a variety of cosmetic choices, and at least one opportunity to really change up a sub-story.

Author Kreg Segall nails the tone almost perfectly. While there are a couple of points in the story that are a bit too obvious in calling back to the original play, A Midsummer Night’s Choice generally maintains the spirit without winking too hard at the player. I’ll admit I wasn’t fully sold on the game until I reached the customary Shakespeare play-within-a-play, which is arguably the highlight of this particular adventure. While you’re meant to perform a tragedy, the play can end up going in a lot of different directions based on your choices, nicely reflecting the variety found in the Bard’s oeuvre. After that event had me grinning from ear to ear, the climactic final battle proved to be the whipping cream and cherry on top of it all. The faerie warriors ride bunnies, friends. Bunnies. 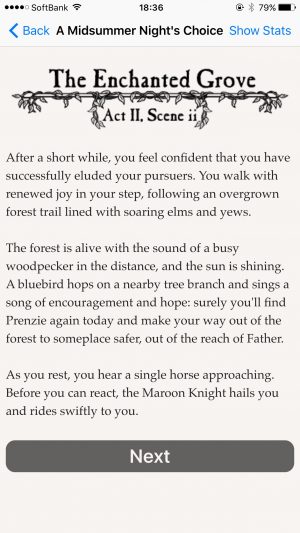 Perhaps in an effort to be authentic to Shakespeare’s plays, the romances in this gamebook are fairly shallow and quickly forged, but since it fits the theme, it wasn’t terribly disappointing. Most of the love interests are expies of characters in the original play, and it’s fun to see where each of the stories goes. Relative to other gamebooks, A Midsummer Night’s Choice has a healthy pool of memorable characters outside of the love interests, as well. I would very much enjoy seeing other adventures set in this world that build on some of them, though I imagine this tale is intended to be a one-shot.

I suppose I should also mention that the bulk of the story is written in regular prose as opposed to the iambic pentameter that Shakespeare favored. I could see that being a plus or minus, depending on the person. Since I was expecting the game to go in hard on the Shakespeare angle, I found it a little distracting initially, but once I got used to it, I wasn’t bothered anymore. You can try out the first couple of chapters of the game for free to see if it agrees with you. A $2.99 unlock IAP will open up the rest of the game for you and remove the ads. There’s a reasonably large selection of Game Center achievements to chase down, and you’ll definitely have to do multiple playthroughs to find them all.

I found A Midsummer Night’s Choice to be quite a refreshing gamebook. While it isn’t laugh-out-loud funny like Ryan North’s To Be Or Not To Be, it almost perfectly captures the absurd tone of Shakespeare’s comedies. The overall plot is satisfying, the characters are well-done, and the references to both the original play and Shakespeare’s works on the whole are a lot of fun. As long as you don’t mind that it doesn’t venture outside of the box mechanically, it’s an easy gamebook to recommend.