The really cool Superhot-inspired shoot ’em up Time Locker (Free) has gotten an update with two cool new features. First is the inclusion of cameos from Rodeo Stampede (Free). Which makes too much sense – why not have stampeding animals in a game that’s full of animals battling it out? Characters including the bull will appear in the 100 coin character machines that pop up on the main game screen for you to play as. 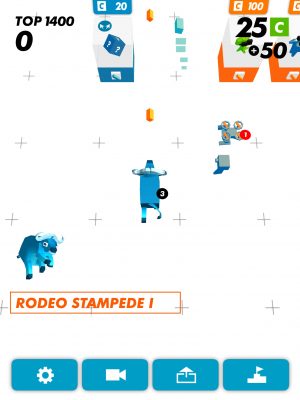 The other new feature – beyond some new non-Rodeo Stampede characters as well – is a new “Big Coin" in-app purchase. $2.99 nets you the ability to earn more coins as you play. There wasn’t any in-app purchase in the game before this, so there was no way to directly support the developer besides watching as many video ads as possible. Now, that’s possible to do, and well worth the purchase. The update with the new stuff is available now.