Hello, gentle readers, and welcome to the RPG Reload, the weekly feature where we know how to retcon and aren’t afraid to do it. Each week, we take a look at an RPG from the App Store’s past to see how it shapes up by today’s standards. It’s a chance to check in on old favorites, consider their place in the overall landscape, or simply to zoom and enhance on games in a way our reviews typically don’t allow for. As the God King of this feature, I try to choose a balanced mix of games from week to week in order to represent the variety in the genre. If you feel like I’m missing something important, you can let me know by leaving a comment below, posting in the Official RPG Reload Club thread, or by tweeting me at @RPGReload. Since the schedule is planned pretty far in advance, I can’t promise you’ll see your suggestion soon, but it will be added to the master list. 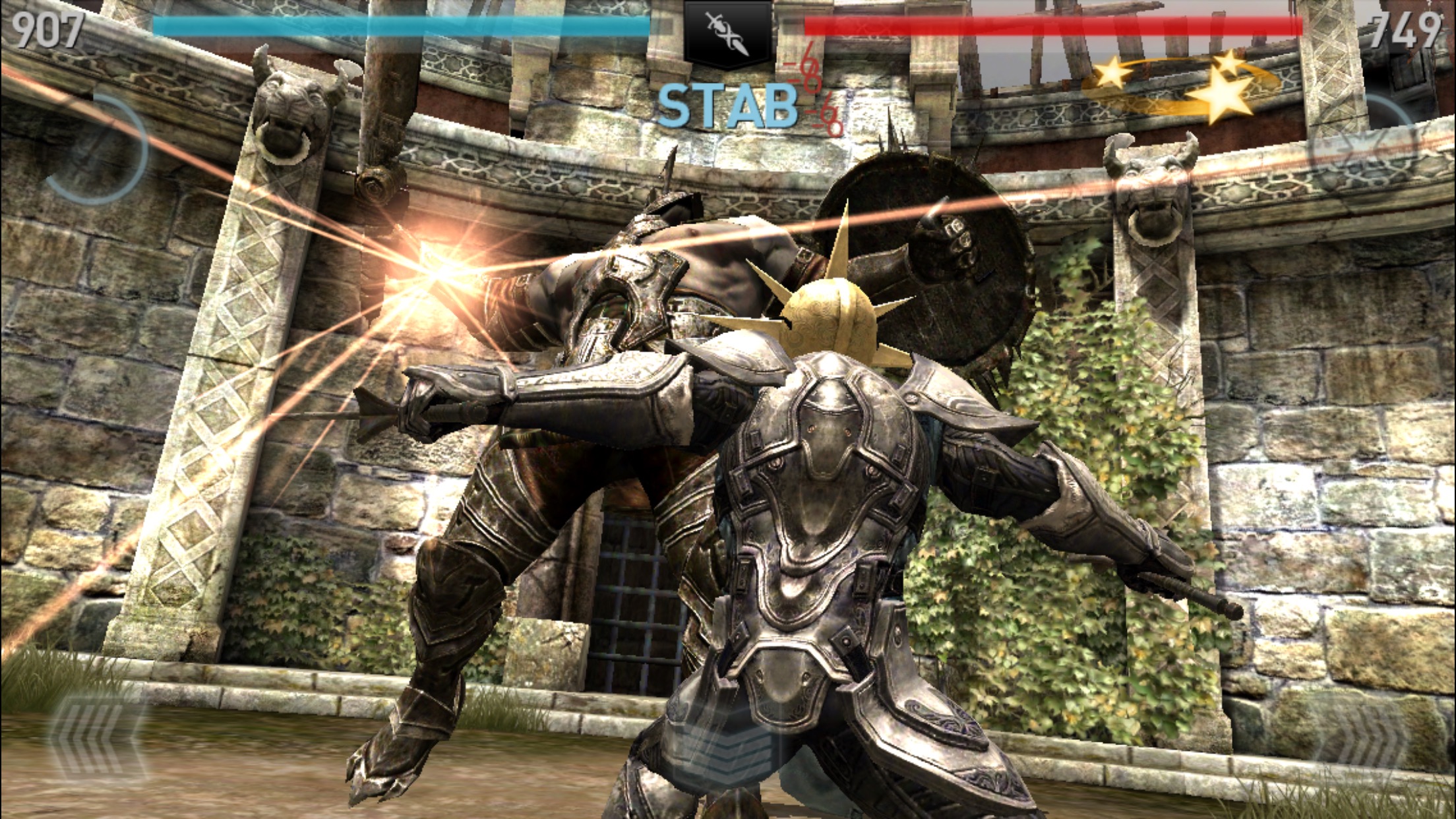 When you make a game that generates over $20 million in revenue and is your publisher’s most profitable game in history, the question of a sequel is less a matter of ‘if’ and more one of ‘when’. Infinity Blade ($5.99) was a smash hit for developer Chair and publisher Epic, and might accurately be called iOS’s first real blockbuster exclusive. A stylish graphical showpiece for iOS hardware, the game had just the right mix of challenging gameplay, accessible controls, and mysterious story elements to hook hardcore gamers and casual players alike. Getting lightning to strike twice is never an easy thing, but it’s clear from the ending of the original game that Chair had at least been thinking about a sequel while they were making the first game.

Thus, less than a year after Infinity Blade‘s December 2010 debut, Infinity Blade 2 ($6.99) made its debut on November 30th, 2011. The first game had received continuous updates that added significant new content, so it’s not like players had much time to miss the series by any means. Chair and Epic had done their job in hyping the sequel, however, announcing it a month prior alongside the release of an Infinity Blade novel, written by famous fantasy author Brandon Sanderson, that bridged the story of the first and second games. While it was apparent that Chair had some designs on a sequel while making the first game, the novel and story set-up of the second game ended up making some major changes to the story of the first. 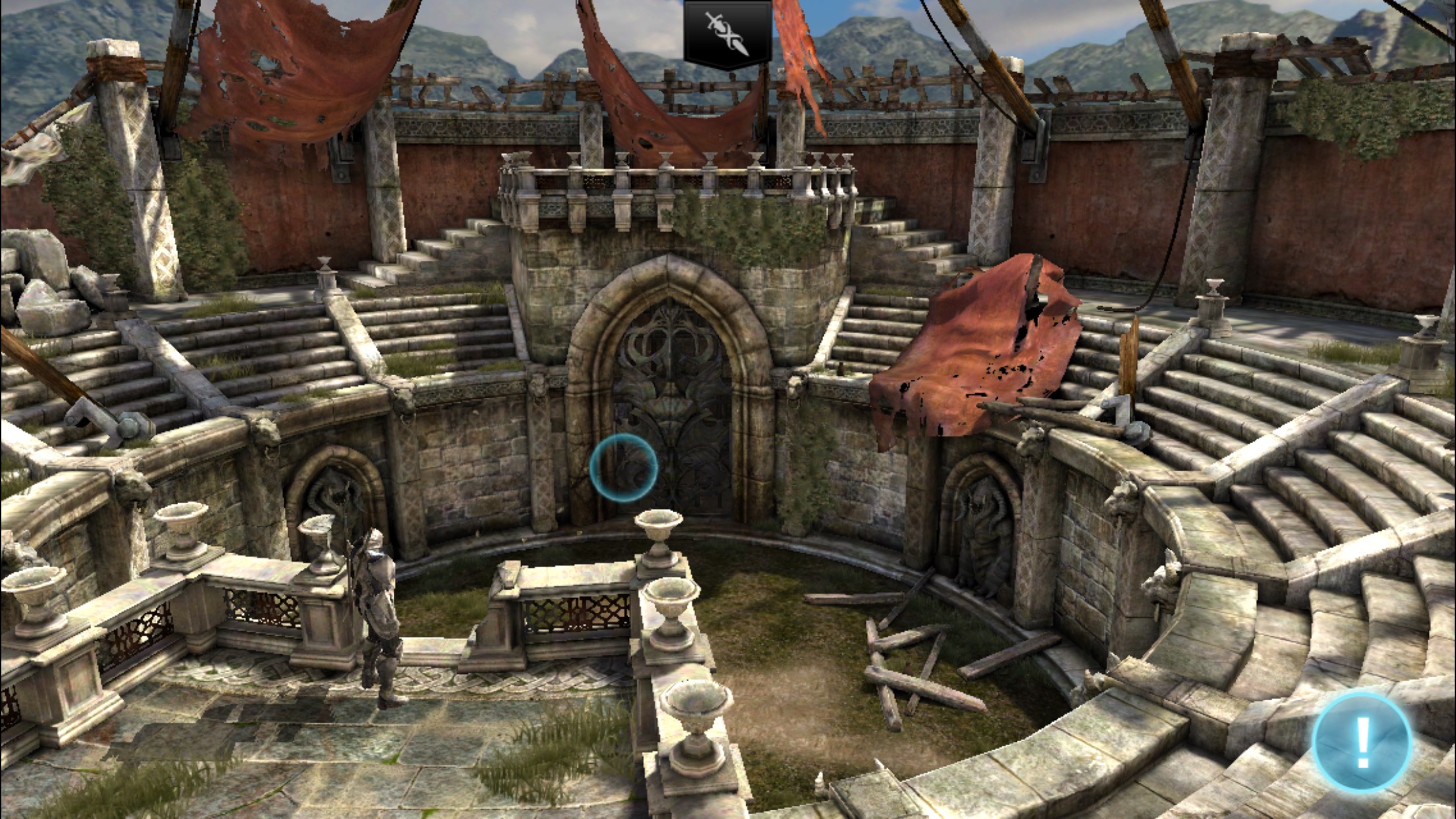 Still, Infinity Blade 2 and its accompanying literature did an excellent job of fleshing out the universe, introducing new characters, situations, and cliffhangers. The first game had what it needed, but if Infinity Blade was to become a larger franchise, it needed the additions that the second game and its marketing blitz brought. As for the gameplay itself, that was a more difficult thing. It was clear what many players wanted. The gorgeous environments and RPG hooks in the first game couldn’t help but evoke images of more freedom of exploration. But with only a year between games, and the significantly higher scope such an expansion would bring, it simply wasn’t going to be in the cards for Infinity Blade 2. It’s a bigger game, to be sure, with more opportunities to explore branching routes, but the majority of the game is still spent in combat.

At first blush, the combat seems like it hasn’t changed much. You’re still engaging in one-on-one battles that call Nintendo’s Punch-Out! to mind, bobbing and weaving until your larger opponent gives you a chance to get in a few shots of your own. But there are actually quite a few changes and refinements that you’ll notice after a while. The most immediate change is allowing you to choose from three different weapon configurations. You can wield a sword and shield, an axe, or dual blades. Each style has a number of weapons to use and master, and you’ll need slightly different strategies during the action. To go along with not being able to block in some of the styles, a new ducking move has been added, and parrying has been made both easier to pull off and more useful overall. 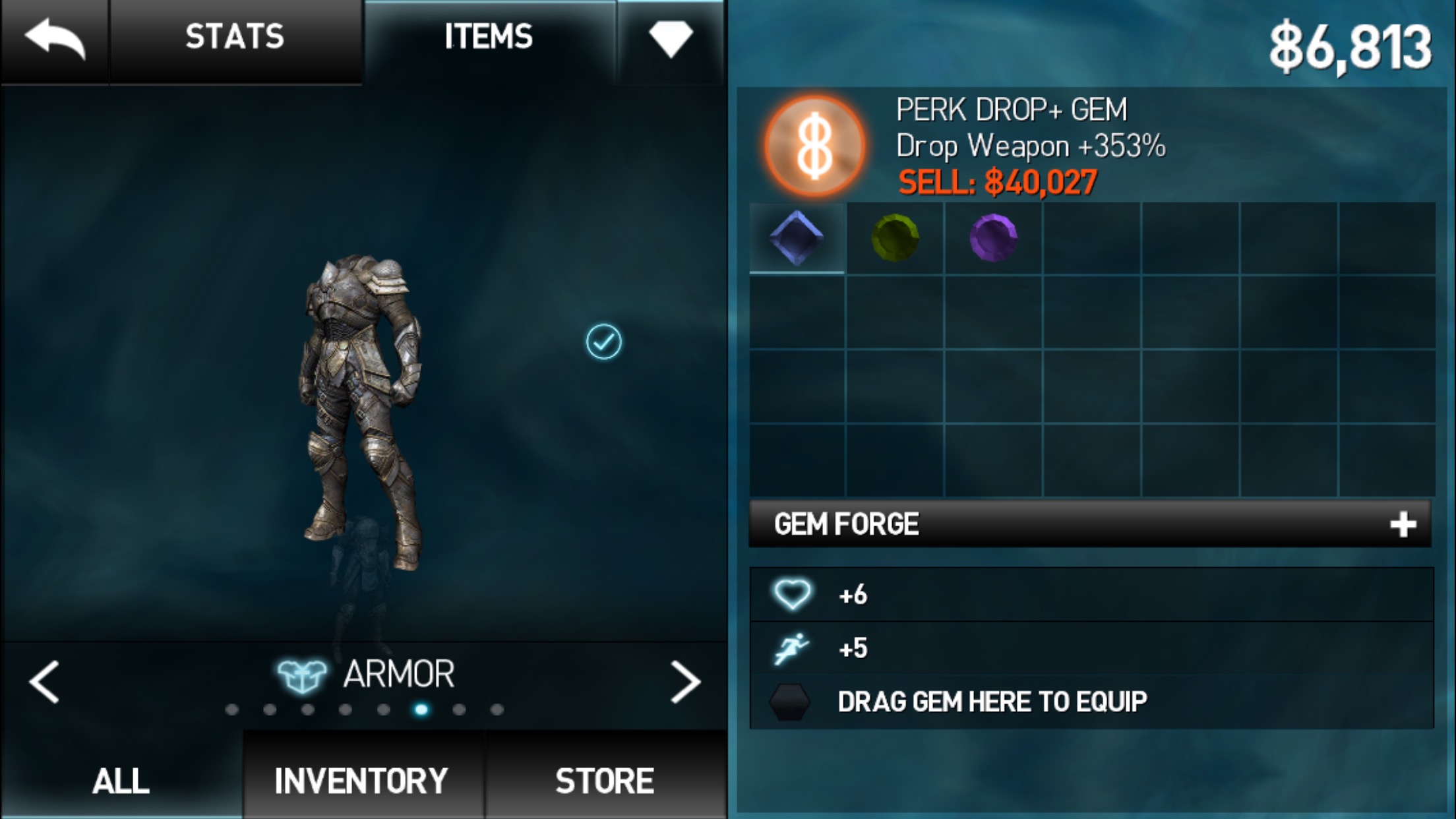 You’ll need to make use of parries this time around, since simply dodging will lead to your character getting fatigued after a while. Ideally, you parry what you can, dodge what you can’t, and block what you must. As in the first game, you’ll have access to a special stun move and various types of magic, both on cooldown meters, but you’ll need to take care of the bulk of each bout with some good old-fashioned hacking and slashing. In addition to the new weapon types and better parrying system, Infinity Blade 2 greatly increases the number and diversity of enemies you’ll face. The first game had a handful of enemy archetypes and changed up the models as you progressed to make it seem like you were getting greater variety. The sequel brings back most of the original enemies and adds several new ones, including some tense battles against distinctly non-humanoid opponents.

Outside of the fights, there are more locations than in the previous games, with more mysteries to solve. You’ll have to hash out what to do, the order in which you should do it, and then pull it all off if you want to see the game’s ending. As in the first game, however, you are limited to tapping on defined hot spots to move around, with some items randomly strewn about for you to tap and collect, most of them being bags of cash. Like in the original, you’re going to need a lot of money to advance your character. Winning battles earns experience, which is distributed equally to each of your equipment pieces. When you master that piece, you’ll earn a stat point which you can distribute, but it will no longer be able to earn any experience points. As your equipment experience fills up, so too does your character experience level, which gives you even more points to distribute. If you want to keep earning experience of any kind after mastering a gear piece, you’ll need to buy a new piece to replace it. At first, it’s not hard to keep up with the costs, but in the long run, things can get pretty pricey. 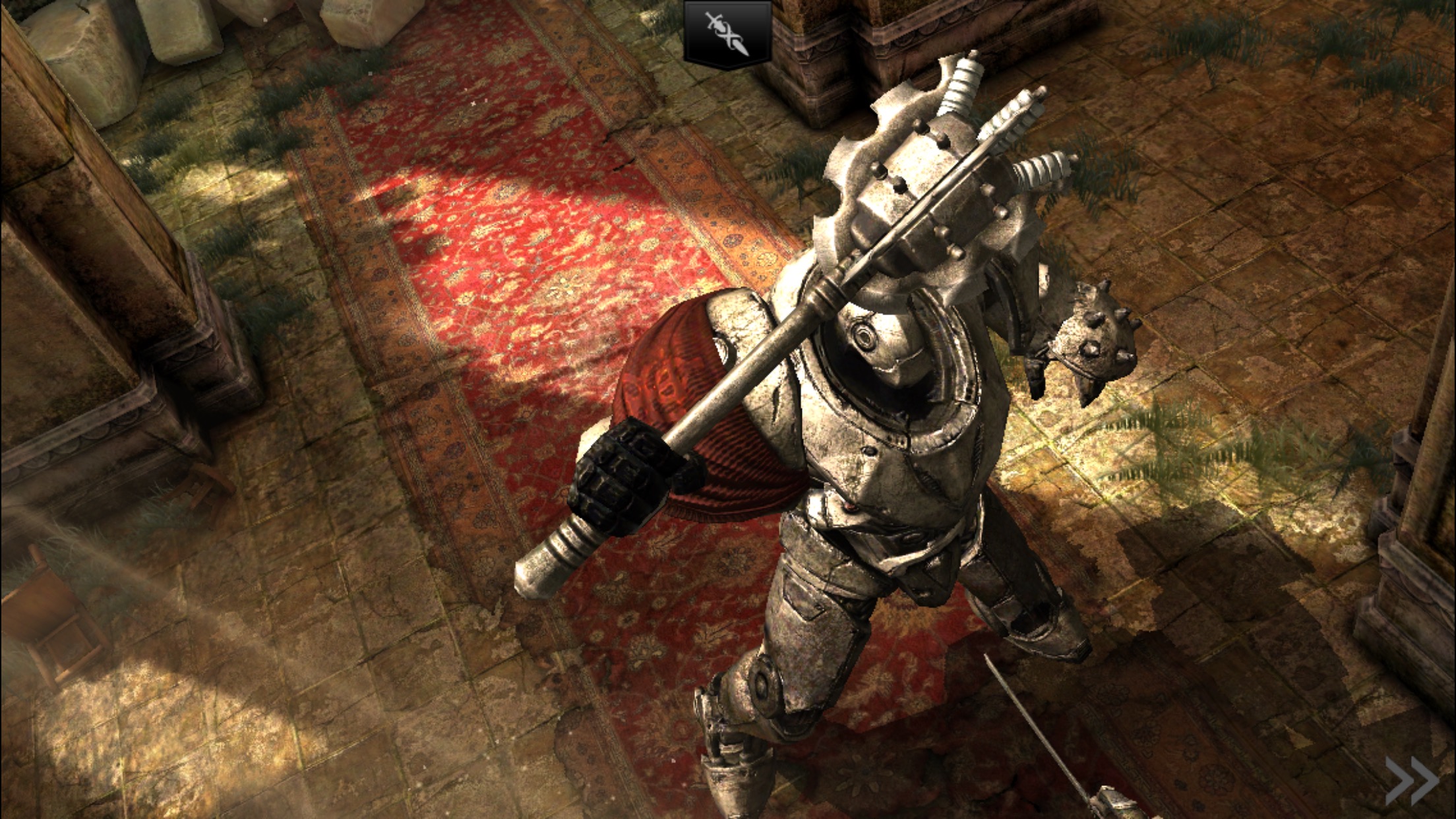 One new point about the character building in Infinity Blade 2 is the gem system. You can find gems in treasure chests or as enemy drops, and when attached to a gear piece, they’ll give that piece some additional effects. You can fuse these gems to create more powerful ones, as well. As with most elements of Infinity Blade, it’s not terribly complex, but it certainly doesn’t hurt as a flavor enhancer. Of course, it’s just one more way you’re at the mercy of luck, but it’s not as though you have a limited number of lives or anything here. You’re going to be farming anyway, most likely, so it’s really just one more interesting thing that could drop on that road.

As mentioned before, the story gets a lot more complicated in this installment. People were mixed about the narrative shift in this game, with some enjoying the sci-fi aspects and others being turned off by the messy nature of the plot. It doesn’t help that it’s hard to follow everything if you don’t read the books that come before and after this game. But even looking at the self-contained story, you know you’re going into murky waters when you’re only on your second game and find yourself having to retcon major pieces of the previous game’s plot. Like many trilogies, sadly, Infinity Blade’s first chapter stands far stronger as a solo piece than it does as part of a series trying to build around it. Since the series appears to be finished as of the third game, it’s unlikely we’ll get explanations or embellishments for a lot of the balls Infinity Blade 2 tosses into the air. The main plot was at least brought to a satisfying close in the final game, but this game ends on an awful cliffhanger. 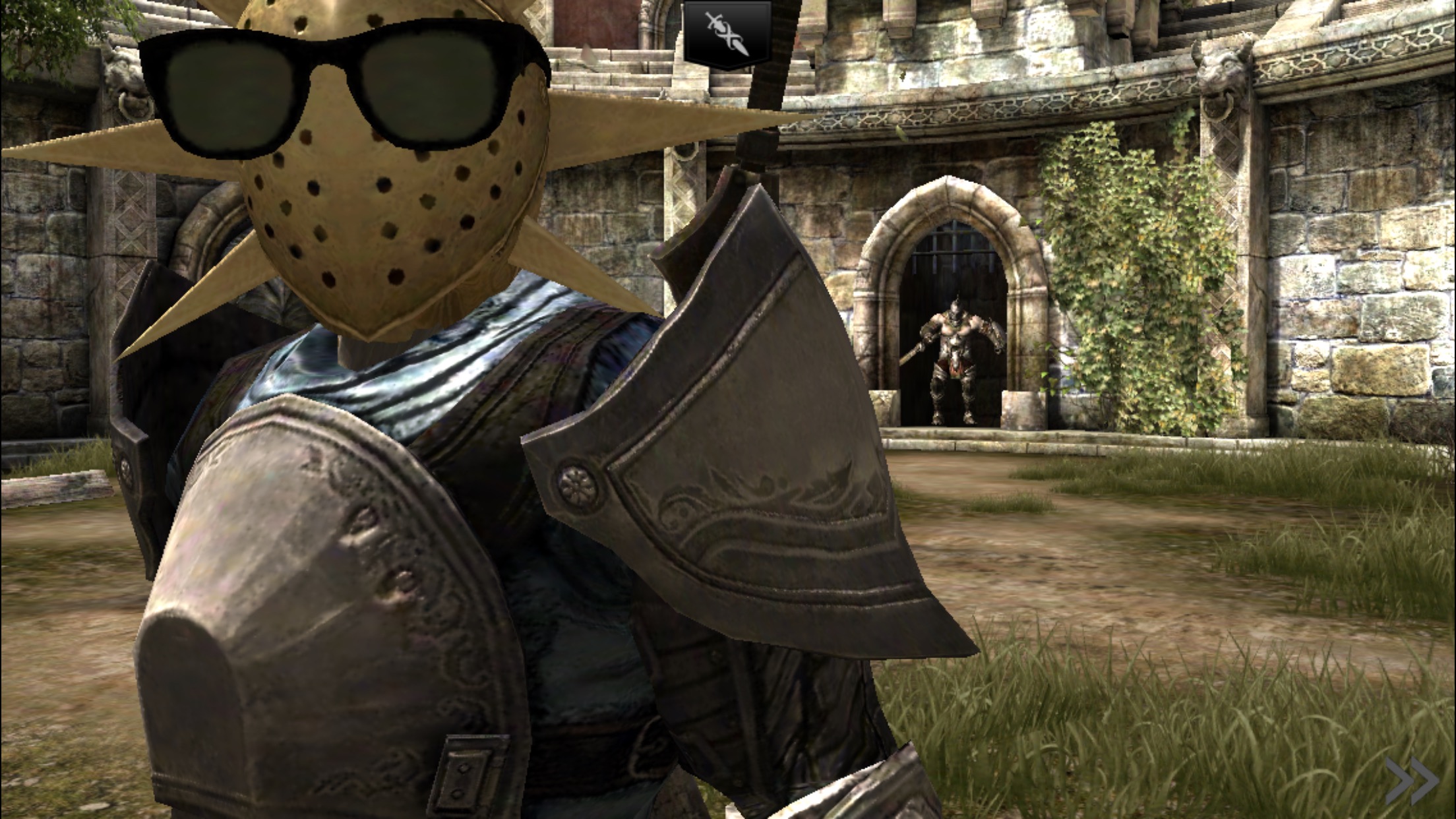 Revisiting the game years later makes one of the common criticisms of the game even more obvious. Simply put, there isn’t a lot to differentiate this game from the first, and what little new stuff is here is debatable in its merits. The equipment grind of the first game helped keep players coming back for more, but doing it all again just to get some story fragments is a bit draining. Fortunately, the fast-paced battle system remains as fun as ever, particularly once you’ve got several runs down and are facing the tougher opponents. Given a choice between the two games, the refinements to combat, greater variety of enemies, and the fact that Infinity Blade 2 has been updated for modern hardware probably gives it the edge over the first game. At the same time, Infinity Blade feels like a more complete game than its sequel. There’s a difference between leaving a game open-ended for a potential follow-up and designing a game around the certainty of a sequel, and it’s that difference that makes Infinity Blade the more satisfying game on the whole.

That said, this is still an excellent game in spite of its flaws and misplaced ambitions. Had the series become annualized, I’d probably be less forgiving of how similar it is to the first, but knowing there are only three games for the foreseeable future, Infinity Blade 2‘s position between the simple joys of the first and the somewhat over-complicated approach the third game took at least give it something of an identity of its own. It’s been well-maintained, too. Like the first game, it received a number of substantial content updates during the year after its release, and even got an update in early 2015 to make it fully compatible with the latest hardware and iOS versions. Incredibly, almost five years later, this is still one of the better-looking games available on iOS, and as long as Chair keeps updating it to match new screen sizes and resolutions, I have no doubt that will remain the case. The series has never really had any serious issues with broken compatibility, but I expect that even if it did, Chair would fix the games. 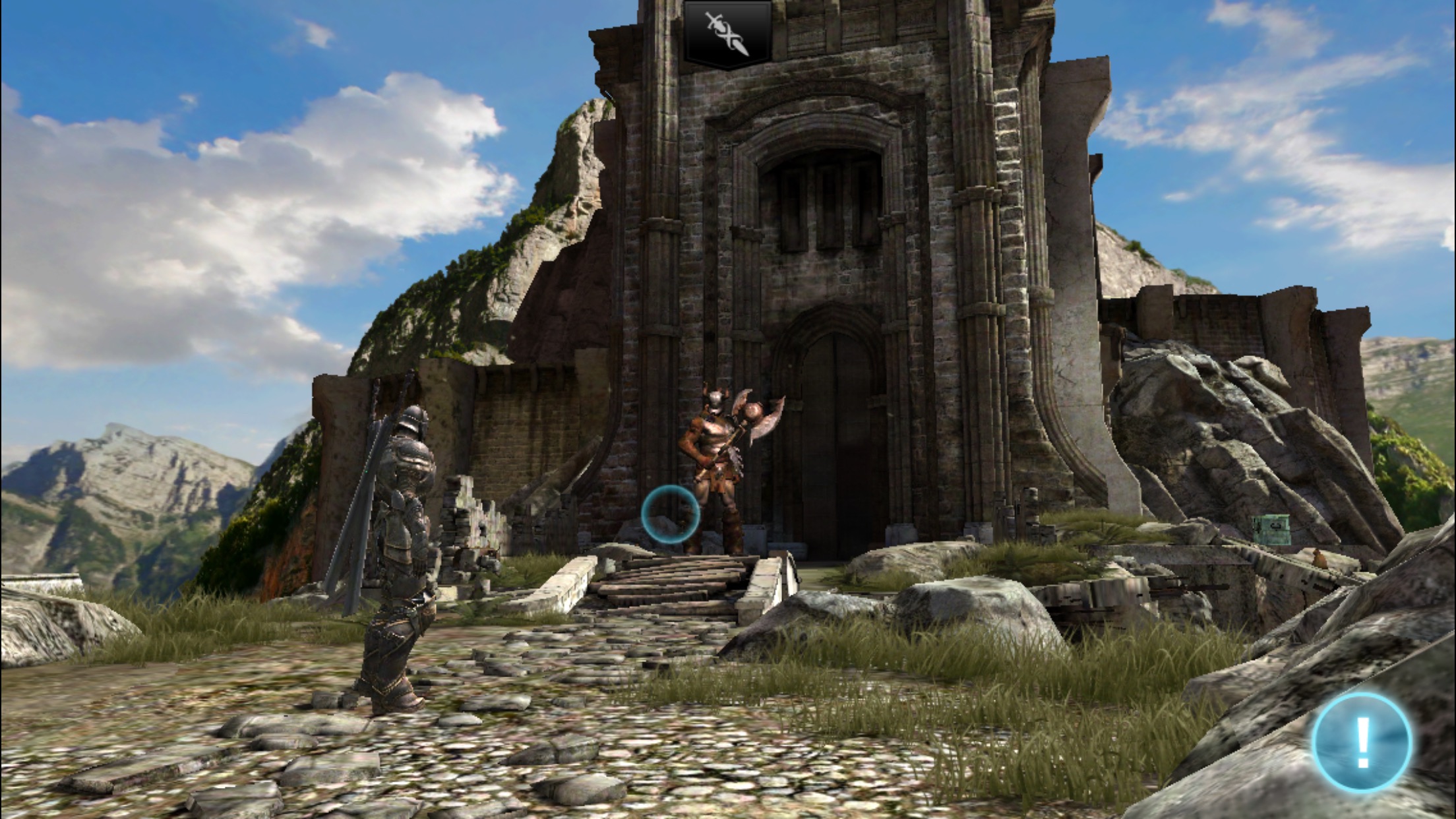 That’s just my take on Infinity Blade 2, though. What do you all think? You can let me know by commenting below, posting in the Official RPG Reload Club thread in the forums, or by tweeting me at @RPGReload. As for me, I’ll be back next week with another great game. Thanks for reading!