Whenever a Hearthstone (Free) Adventure or Expansion comes out, there are some cards that get players all riled up because of their apparent uselessness. So, it’s not surprising that the upcoming One Night in Karazhan Adventure has generated its share of complaining, but what is surprising is that the upcoming card Purify has been scorned so badly that Blizzard felt it had to come out and respond to the criticisms. Purify, a common 2-mana Priest spell that silences a friendly minion and lets you draw a card, has really become the focus of many players’, including pro players’, criticism and for many the best example of Priest’s sorry state.

As you can see in Kripparian’s reaction video above, there are some issues with the card. For one, you have to have a minion on the board to play it, which isn’t always the case with Priest, and silencing your own minion is very rarely a positive. The main issue, though, is that Priest at the moment is admittedly the weakest class in the game by far, so players expected that One Night in Karazhan would make Priest better or, at least, playable. Instead, we get Purify, which for players represents Blizzard’s failure to get Priest back in the game in any meaningful way. 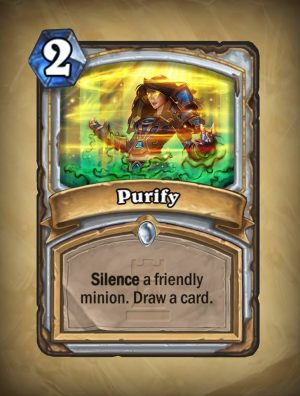 The negativity was so intense that Blizzard came out and explained the developers’ thinking behind Purify and Priest in general. In a reddit post, game designer August Dean Ayala, or IksarHS as he’s better known, explained how the developers are pretty happy with the help Priest is getting from neutral Karazhan cards, so they decided to do some testing with a new archetype that Purify could be a part of. He reminds players that card designs have a number of different goals – some are to be immediately competitive while some are there for flavor, arena viability, etc. So, what do you think of the Purify discussion? Do you see Blizzard’s point about Priest, or are you still disappointed by the state of the class?