I’ll come to the point immediately today: Legends of Heropolis (Free)is a terrible game. If you had access to a state-of-the-art 1966 Batcomputer and asked it to show you the worst possible outcome of a merger between a Kairosoft sim and a Japanese free-to-play social RPG, Legends of Heropolis is what it would belch out on those little printed strips of paper before self-destructing. It’s overly-busy, the UI is disastrous, there are elements included that make no sense whatsoever for the theme, and the battle system is monotonous button mashing. While there isn’t much in the way of a hard paywall, you are required to be online, you have a stamina system to deal with, and there’s a gatcha-type random draw for gear to entice you to spend real money. Not content to merely borrow from Japanese free-to-play hits, there are also timers on buildings that you can rush if you’re willing to pay. It’s a veritable Megazord of mean-spirited ideas.

Since this is a Japanese game, the heroes referred to in the title aren’t the capes and chiseled chins that Western fans might be expecting. Instead, it’s a game based on Super Sentai, those rainbow-colored hero teams that were the basis for the popular Power Rangers franchise. I think it’s a great idea for a simulation game. Sure, Chroma Squad kind of beat Kairosoft to the punch, but that’s not on mobile yet and doesn’t exactly play the idea straight. This being Kairosoft, however, means that there’s going to be a lot of cruft grafted onto that concept. You’ll have to build a city for your heroes, with all the facilities you would expect them to need and a whole lot you wouldn’t. Of course there’s farming. Of course there’s fishing. I remember those great episodes of Tokaiger where the heroes had to stop fighting bad guys and grow onions for a while so that they could make and sell salads so that they could upgrade their suits. Brilliant. 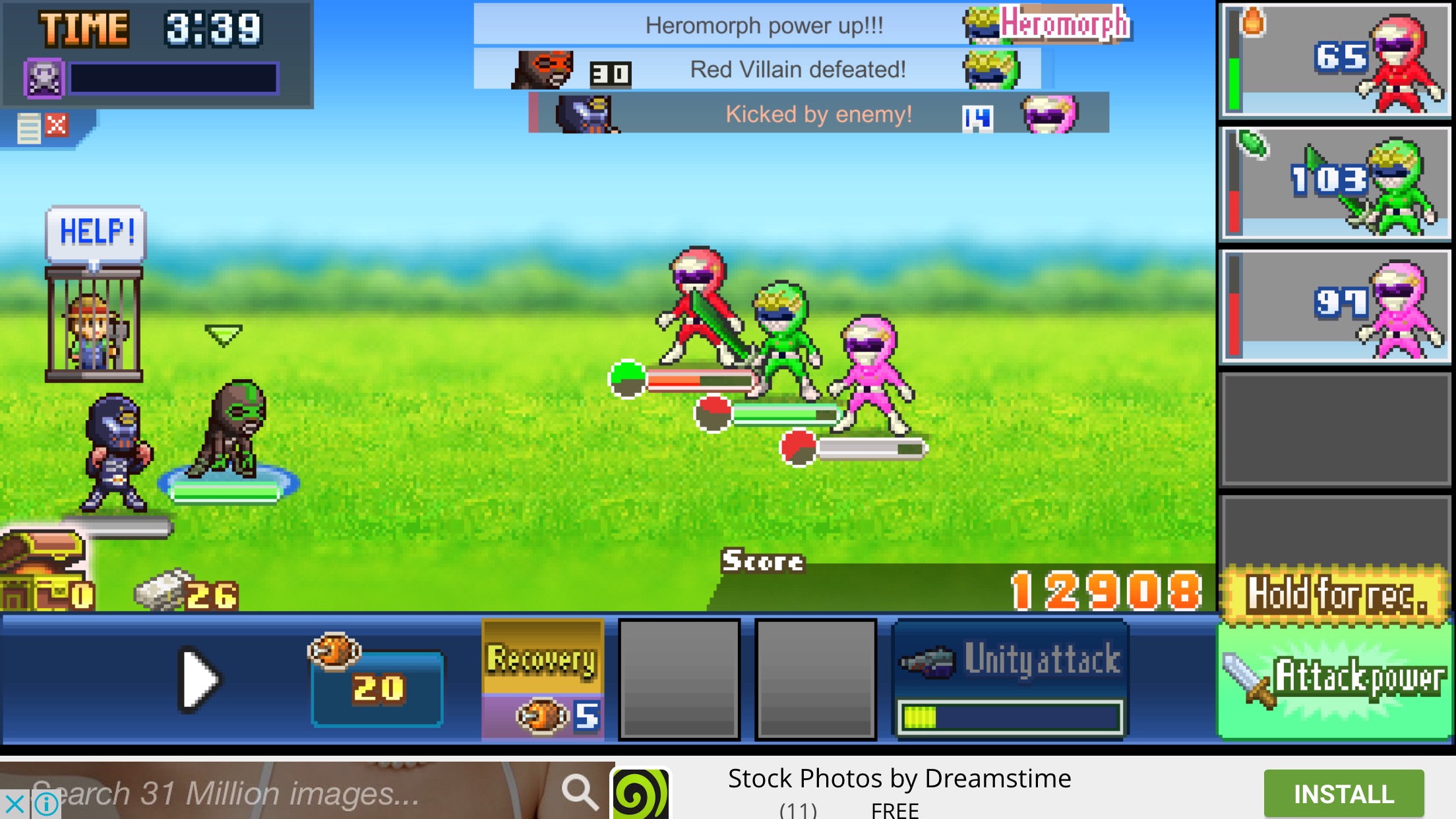 Even clearing the table of all of the bad monetization decisions in the game, which I’m going to go into shortly, Legends of Heropolis is a messy, hard-to-enjoy game. At its very best, it’s treading the overly-familiar ground we’ve seen in earlier Kairosoft games. At its worst, it’s a confusing, tangled, nonsensical mess of systems that are interconnected for no discernible reason. Most of the time, it’s just boring. The game revolves around completing story battles. In these battles, you’ll either have to defend your city against invading enemies, or head out to an enemy base to clear it out. Both work in essentially the same way.

Tapping on an enemy brings you to the battle screen, where you and the foes will be lined up in typical JRPG fashion. You can make your characters attack by tapping a button, but they’ll need to rest between shots, lending things a pseudo-real time feel. After a while, you’ll be able to morph into your costumes, which gives you access to that character’s special skill. Defeat the enemy and you’ll be sent back to the map. Once you’ve beaten them all, or taken out the boss, you win. These story battles unlock new features and facilities, and also give you valuable resources and experience. 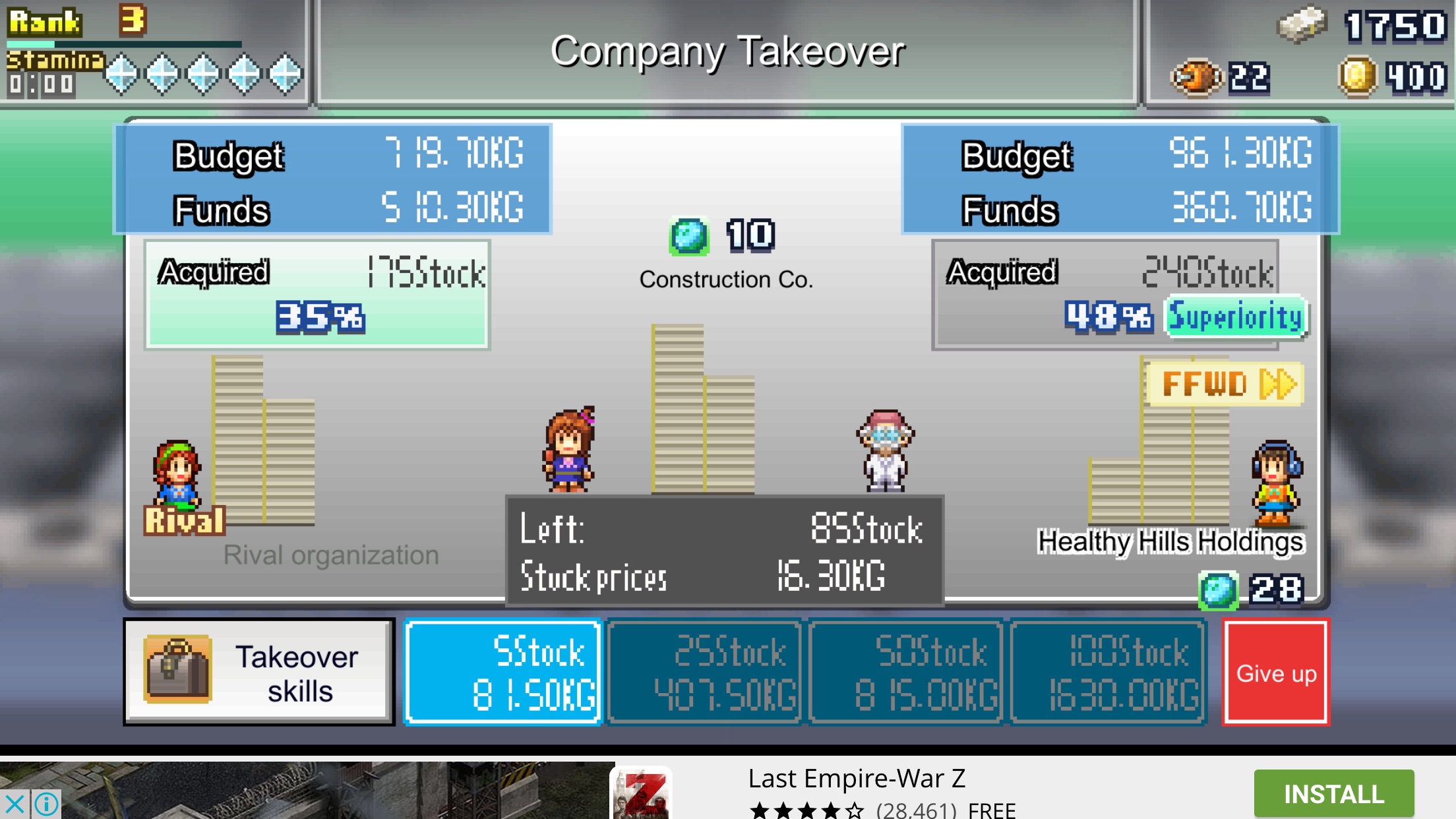 You might be tempted to take these missions on in order, but you’ll eventually run into a wall if you do that. Enemies get harder, and the resources you collect from completing the battles are rarely sufficient to power up as much as you need to in order to handle them. So you’ll end up repeating the same missions to gather more goods, which is even less fun than it is the first time around. I suppose it’s something to do while you wait for the timers on things, though. Between battles, you’ll need to build buildings and structures, plant seeds in your gardens, set your buildings to prepare recipes for goods, and invite people to visit your town. You’ll also want to duck into your headquarters and do some upgrading to your suits. If you’re feeling particularly frisky, you can try your hand at a draw for a new, more powerful suit. While space is initially limited, don’t worry too much about it. Characters don’t need a path to a building to use it, and you’ll soon open up more land through a very bizarre auction mini-game.

As weird and out-of-place as some of these systems are, the basic idea of fighting to earn resources to upgrade your characters for tougher fights is a sound one. Sure, there are timers, but you can kill that time by fighting battles, so it’s not that bad. Well, it wouldn’t be, anyway, if it weren’t for the stamina system. Doing a battle consumes some of your stamina, so repeating battles will quickly exhaust it and leave you with nothing to do but watch timers expire. Leveling up refills your stamina meter, so at least initially, you won’t run into too many obstructions from this system, but the longer you play, the more restrictive it becomes. Similarly, the coins used for speeding up processes and drawing new suits flow nicely in the beginning, but the economy soon tilts against you heavily. Basically, you’ve got all the restrictions of a bad free-to-play game, and in exchange, all you get a disappointingly mediocre Kairosoft sim. The ever-present banner ads and occasional mandatory video ad are the cherry on top. 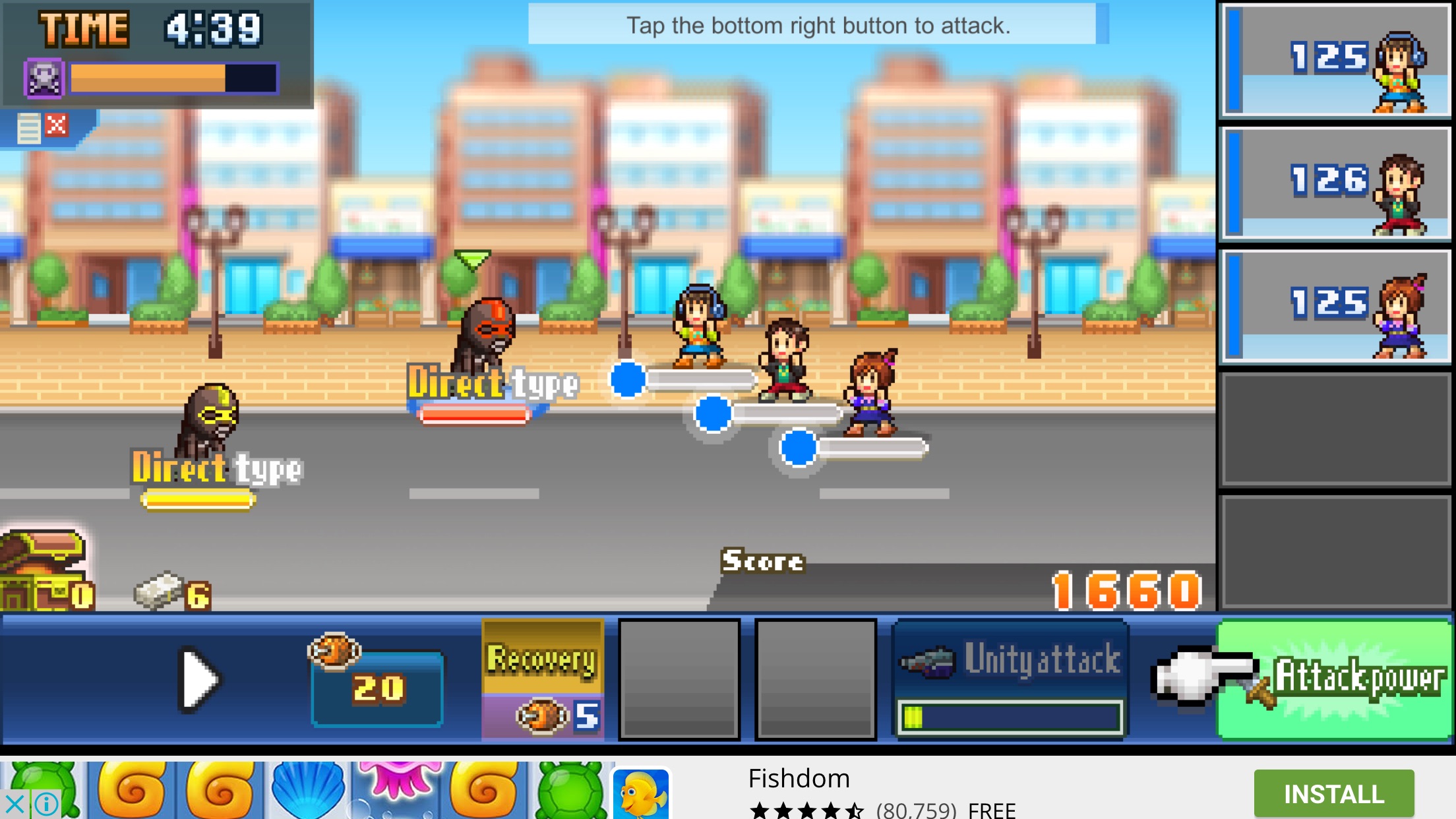 Don’t worry, though. You can buy out of most of the free-to-play stuff if you want. Just buy the Hero Pass for $9.99 and you’ll remove the ads, get some premium coins every day, and have all of your other resource caps increased significantly. You’ll be able to field some extra teams, too. But wait, what about the stamina system? Oh friends, that’s an extra IAP. You’ll have to pay an extra $12.99 if you want to be freed from those shackles. That just leaves the online requirement and the dreadful balance to deal with. Being able to carry more healing items helps mitigate that, but what a miserable excuse for balancing a badly-designed battle system that is. Any RPG that asks you to spam healing items to survive a simple battle is probably not one worth playing.

That the price of buying out of all of this could buy you three or four of Kairosoft’s premium titles makes it much worse. Maybe it’s because even after spending more than $20.00, you’re still left with a game that feels like a free-to-play experience. Maybe it’s because Legends of Heropolis is so lousy that it wouldn’t be that enjoyable even with every stitch of monetization trickery sucked out of it. I can’t decide, so you can pick. 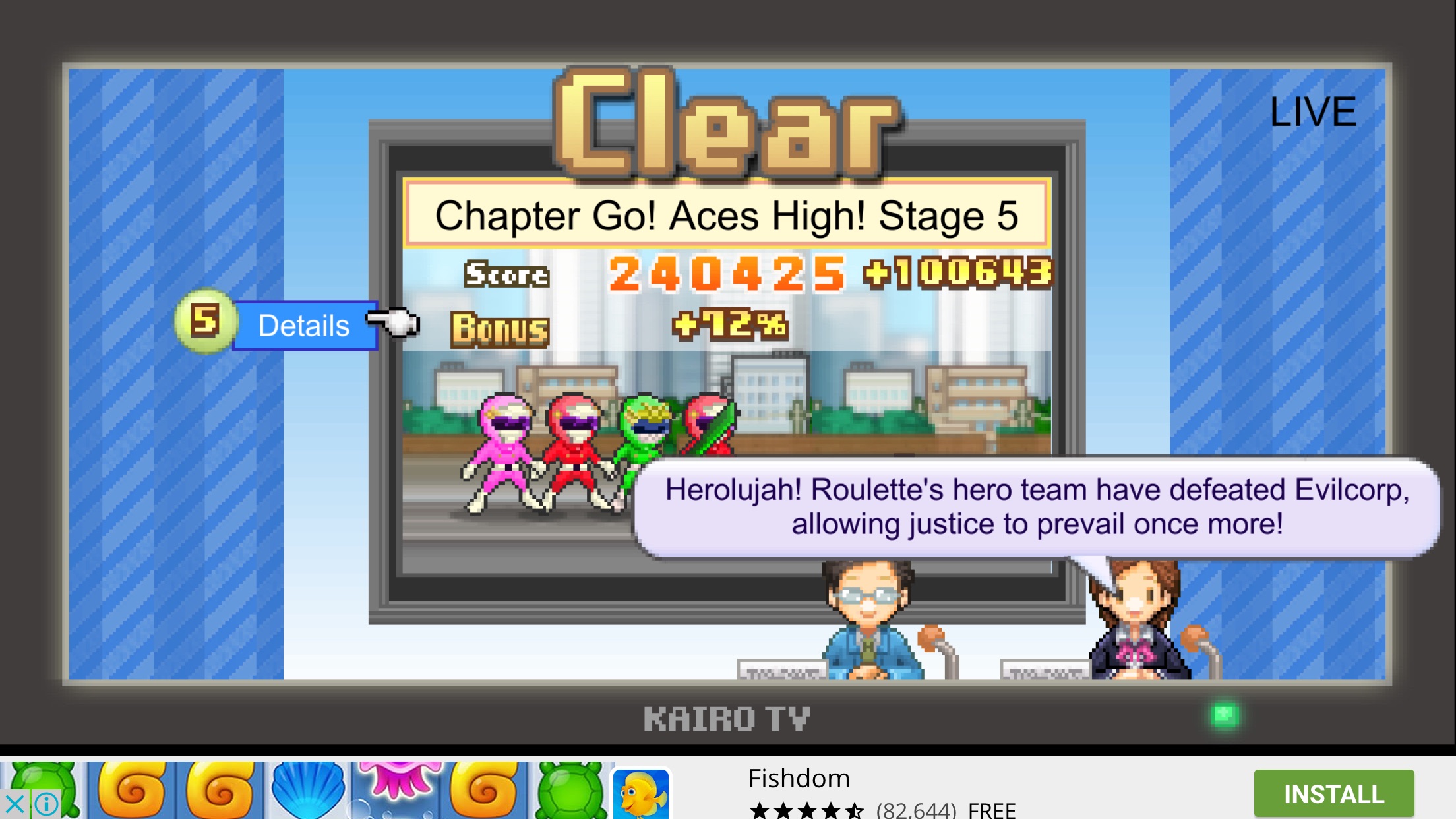 Look, I’m used to Kairosoft not impressing me or surprising me. That’s more or less their stock-in-trade. I’m not used to them disappointing me, at least not on this level. Legends of Heropolis takes a promising concept, strangles it with excess systems that only weaken the broth, then pours the whole works into a pot half-filled with soapy water. Dinner is served, friends. This is an awful Kairosoft simulation. This is a poor free-to-play social RPG. I haven’t even mentioned the frequent bugs, have I? Well, those are there, too. I wouldn’t serve this slop to the second Black Power Ranger, and we all know I have it in for that guy. Perhaps if we all try our best to avoid eye contact, Legends of Heropolis will go away. If this is the future of Kairosoft, they’re going to get beaten down like Putties who get between Tommy and the racks of green clothing at K-Mart.