I first played Guild of Dungeoneering ($5.99) on PC at PAX South 2015, and I thought from the first time I played it that it would be perfect for mobile. Well, it took a year and a half between the game’s continued development and PC release to finally make it happen, but this curious little roguelike where you use tile cards to build the dungeons as you traverse them and fight enemies using a separate card system, is well worth the wait. It has its own quirks and shortcomings, but really it’s like nothing you’ve ever played before. 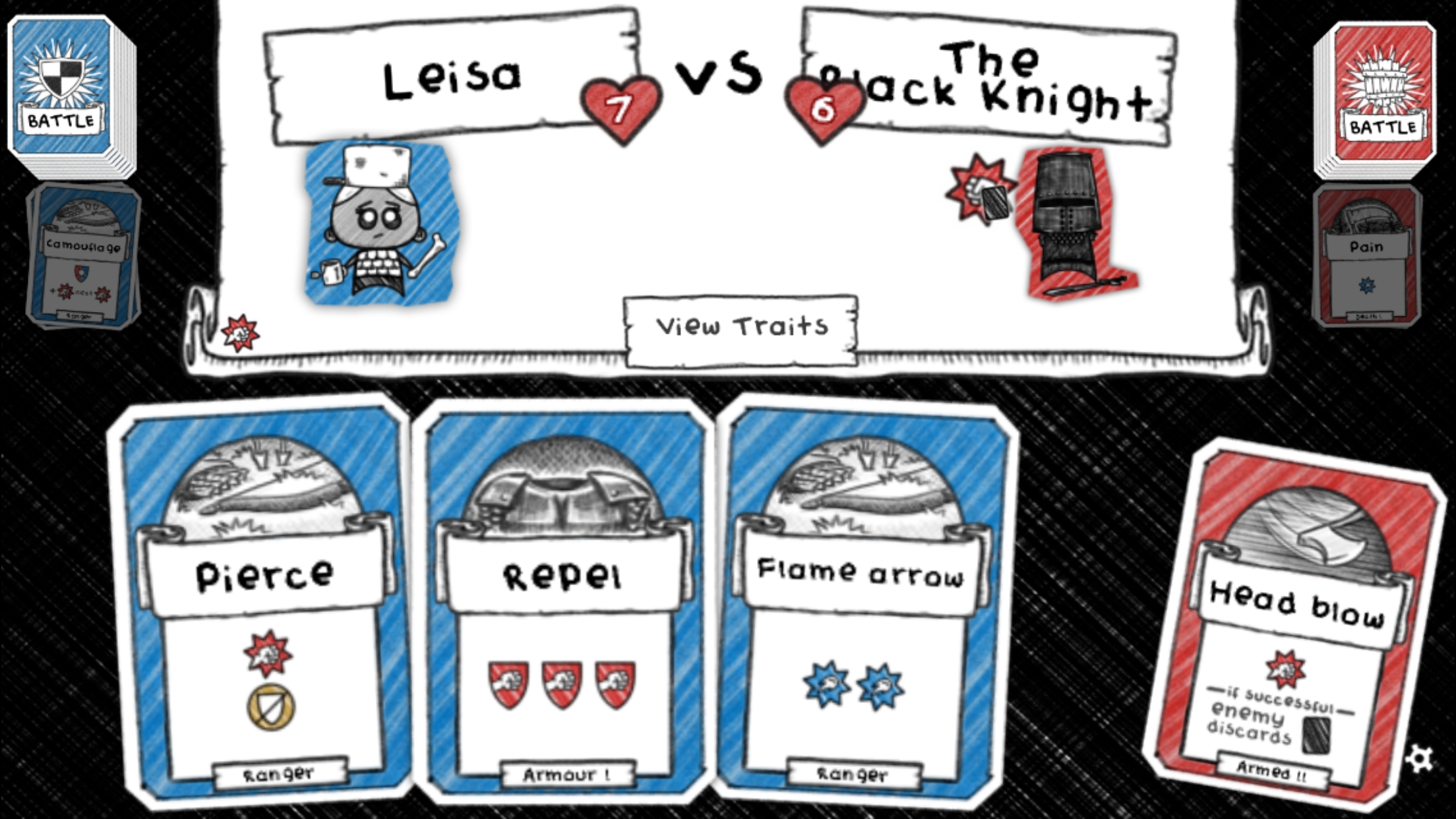 The whole concept of Guild of Dungeoneering is that you don’t actually have direct control of any of your units as they move about, but you can influence their actions by laying down one of three kinds of tiles on the dungeon floor from a hand of 5 tiles each turn. You can lay down room tiles to create paths, though you have to make sure all adjacent exits are connected. No fake doors here! You can lay down tiles that contain gold, and these are useful because they really draw heroes to them, if you’re trying to draw a specific path. You can also lay down enemy tiles. Now, you don’t have to lay down any tiles at all, and you may wonder why you would want to lay down enemies at all. Well, it’s based on the way that you level up. You can get to a higher level only by defeating an enemy of the same level as you, and enemies only drop loot that is on par with their level. So, in order to get powerful enough to defeat the bosses you’ll face, you’ll want to face strong enemies, but also face them often so that you can rack up the powerful loot to give you the upper hand.

Navigation takes things out of your control, but you have more of a say of things in the combat portion. You draw 3 cards, and can do damage as either physical or magic damage. However, each card can also have defense units against physical and/or magic, or can be an unblockable attack, or can have alternate effects like going first, as the enemy typically always goes first. There’s a serious randomness component to the combat, one that you have to use intelligently in order to win each battle. Though, it does help that your health resets each fight, so you don’t have to worry too much about going down to the wire in a fight. 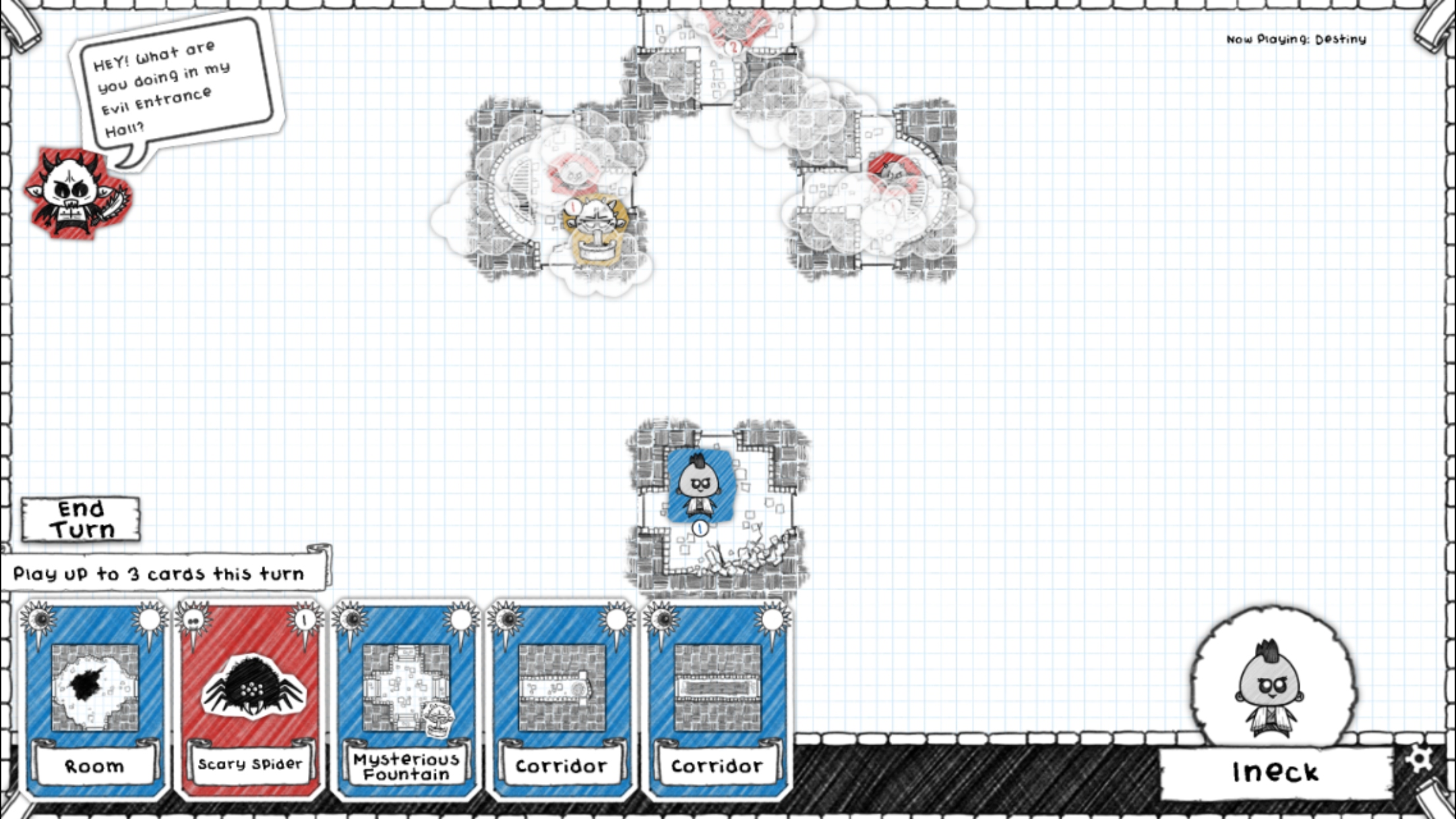 Still, the combat is fun because there’s this oneupsmanship to it. For example, bruiser characters, which focus on physical attacks and defense, have a permanent trait where they can deal damage to the enemy by blocking all damage in a turn. It feels great to not only counter a powerful attack, but to also deal damage back. Or, in a battle where the last turn will win it or lose it for you, to bust out a bolt card where you go ahead of the enemy is quite the pleasing turn of events. Each battle is interesting, though luck does play a huge role with the cards that you draw. With the different characters, you can pick and choose which ones are the best fit for the level you’re taking on.

Guild of Dungeoneering does have a real sense of experimentation to it, letting you get the experience of playing with all sorts of character classes. You have to unlock them with the gold you earn in the various levels, and they all come with their own deck of cards to use in battles and alternate effects. The ranger that gets to go first with physical damage attacks is a personal favorite. Every time you lose a character, you have to wait a bit for a new dungeoneer in that class to resurrect, so the game forces you to experiment with other classes. As well, there’s also a clever aspect where characters who defeat levels pick up battle scars over time that give that one character certain traits. So, losing a character feels like you’re losing a specific person, a unique entity all their own. Sometimes the character AI can feel a bit weird, like when instead of going for an objective, my hero went back for treasure I laid down earlier that they previously had ignored, but it’s just kind of the quirky charm of this game. 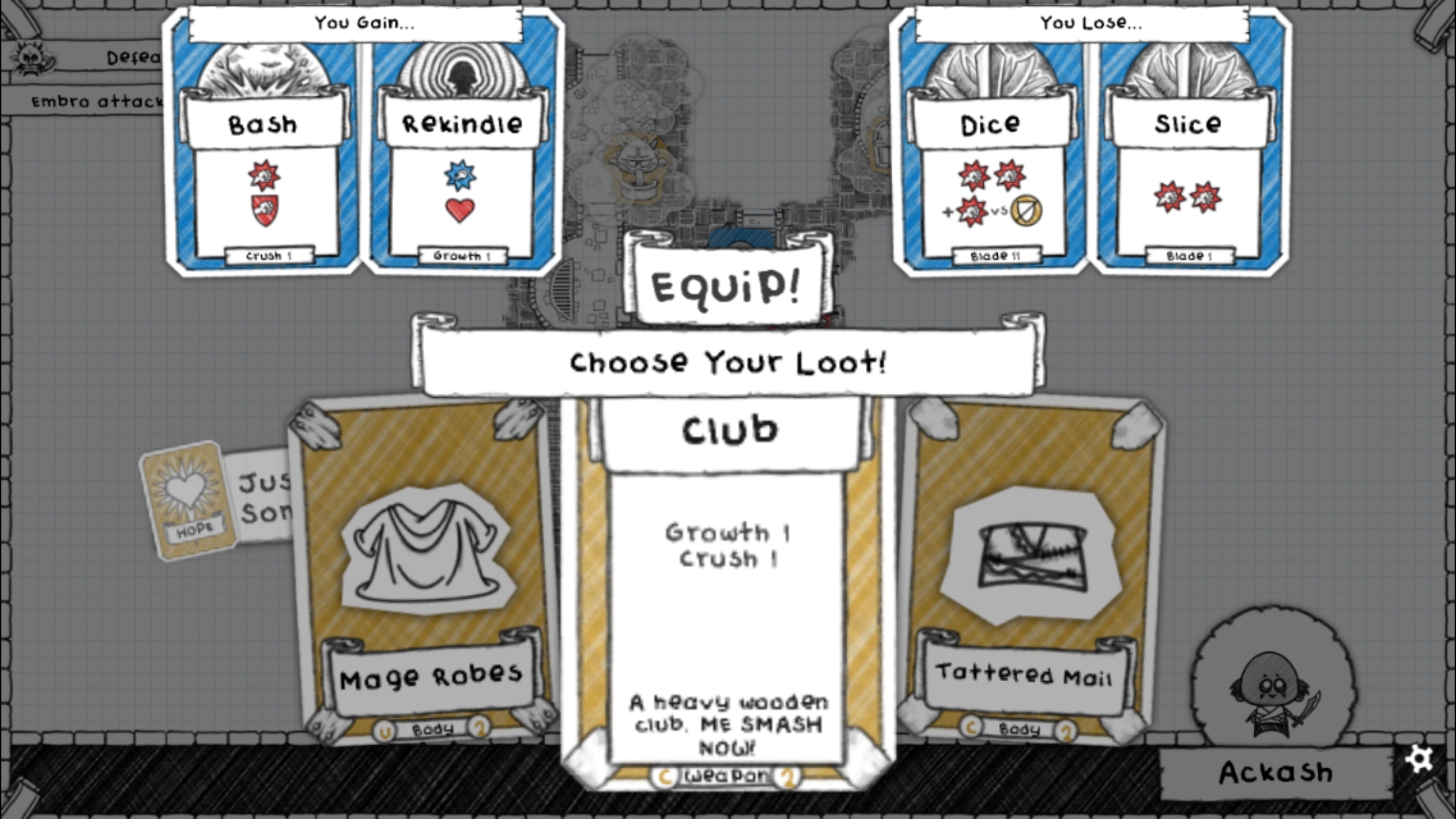 The game is about building up your Guild, spending gold on upgrades for new classes, better loot to appear in dungeons, and stat bonuses to be had for each level. You thus do have a choice in how you want to advance the game and what you want to unlock and when, there is no progression obfuscated from your view. The missions are short enough to where you can squeeze one in with a few moments, but the game feels great to play for an extended period as well. Now, I will say that the game is great on mobile as an idea, but interface-wise, it’s best on tablets. Even on the iPhone 6 Plus, everything on screen is just a bit too small. It’s not a major problem, the size of items doesn’t create any accidental actions – that happens mostly when cycling through cards in battle when you have more than 3 in a hand – it just feels like more optimization for phone-size screens could have been done. If you plan on playing on a phone, don’t let the interface’s smallness stop you, but do know it’s an issue.

The randomness is perhaps the chief flaw to Guild of Dungeoneering, as while you have a lot of choice in how you can approach challenges, sometimes the draw just won’t favor you. But sometimes, it feels ridiculous. I got into one situation where I had to reach a certain spot on the map in 8 turns. Seems simple enough, but because I draw so few tiles that gave me a straight path upwards, it became impossible to complete. And this is where the waiting for a class to respawn hurts, because I lost my Ranger due solely to luck of the draw; I’m pretty sure it was impossible to win that level with the draw I was given. Especially since you can’t put tiles down on spaces that are otherwise not connected to the player’s tiles, meaning even if you have a path tile that would work for planning, you can’t lay it down. The punishments for failure aren’t too severe, granted, but it’s still annoying to deal with.

Really, Guild of Dungeoneering is unlike few other games that I’ve played, and that’s why it’s worth checking out. It has the elements of roguelikes, and card games, and even base-building, but the way that these are all implemented is wholly unique. And the theme, featuring sketchbook graphics and humorous singing from the bard narrator, really makes the whole thing come to life in a way that doesn’t feel like a lot of other roguelikes. It’s not a perfect game by any measure, but it’s unique and charming enough that I recommend giving it a shot.