Recently, I was invited to come and visit the headquarters of BlazeGames, the developer behind the new game Battle Champs (Free). Along with a few other members of the media, I was given a brief tour of their offices located in Shibuya, Tokyo, and got to see a short presentation about Battle Champs. The highlight of the trip was a chance to ask some questions about the game to a few of the team members. Producer Yuji Okada, art director Akihiko Yoshida, and assistant art director Satoshi Matsura all took some time out of their busy schedules to tell me about the new game. As the interview ended up being quite lengthy, I’ve broken it up into two different parts. Make sure you read the first part of the interview before going ahead.

TouchArcade (TA): To be honest, many of our readers are quite skeptical of free-to-play games. They’re especially worried about things like paywalls, where you can’t continue without paying money, or in a competitive game, pay-to-win, where someone can pay to gain a big advantage over other players. Is there anything you can say to allay any fears they might have about Battle Champs?

Yuji Okada (YO): Well, first I want to ask Mr. Yoshida and Mr. Matsura if they’ve ever paid in the game while playing it? 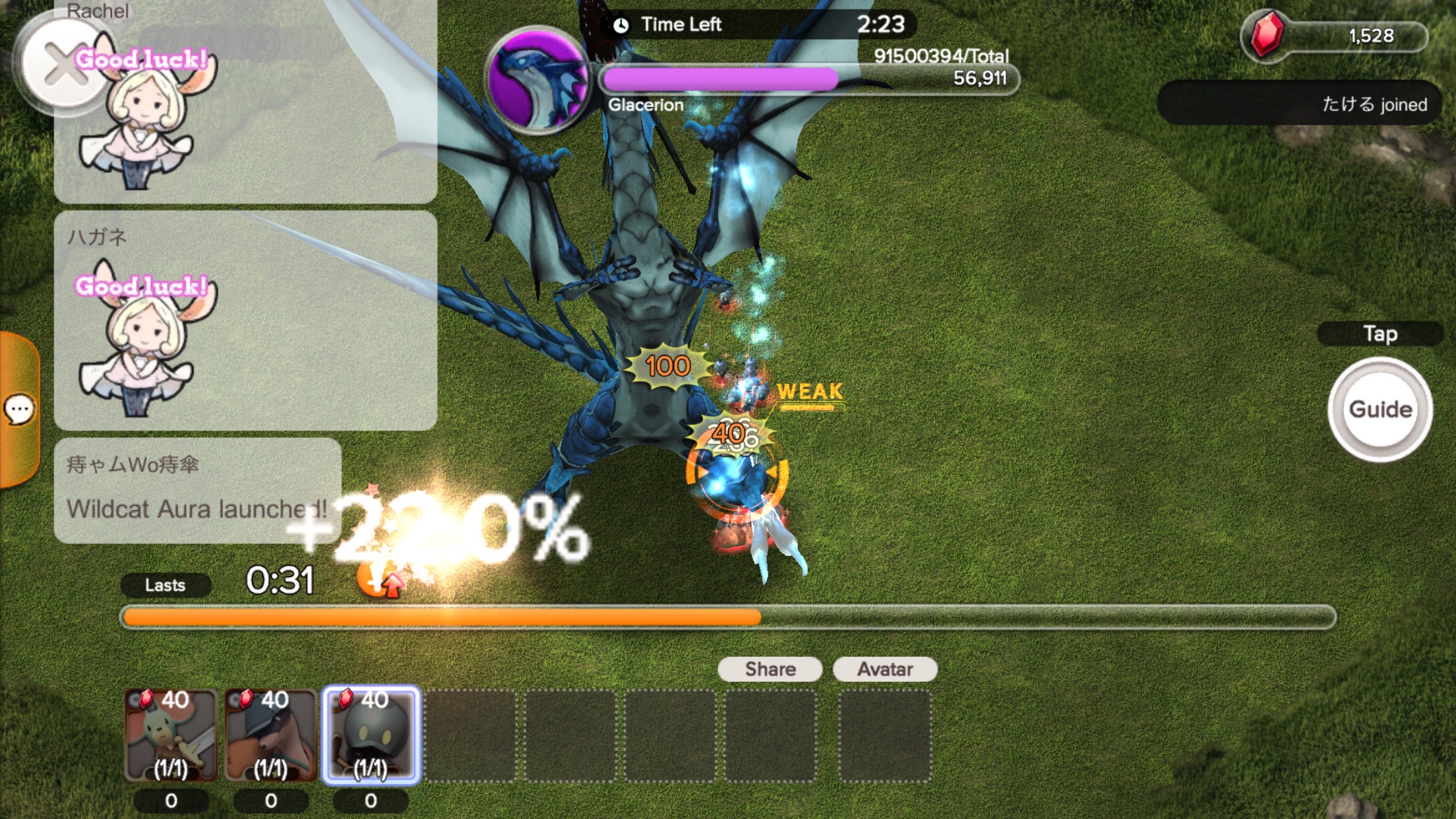 Akihiko Yoshida (AY): Yes, a little bit, just to try it out.

Satoshi Matsura (SM): I have not, at all.

AY: And he’s always beating me, so… (laughs)

YO: Um, it is true that the game is designed in such a way that if you pay money, you can win more quickly. But it isn’t necessarily guaranteed that if you’ve paid money, you’ll always win every fight. Player skill is very important in this game, and so even if you get certain characters or are able to strengthen or upgrade them more quickly, if you aren’t able to use them effectively in battle, you’re still going to struggle.

I mentioned that there is a wide variety of Champs that you can get in this game. Almost all of them can be acquired through the story or through battling. I would say, don’t be concerned that we are approaching this game as a pay-to-win game, as we certainly aren’t. There are players who have reached number one in the rankings without paying anything.

TA: I know the international version is running on the same servers as Japan, but are you making any special changes for the import version? Anything beyond the language, I guess?

YO: There’s really not much of anything aside from the language. We did make some minor changes to the graphics, but it’s essentially the same as the Japanese version. The functions and the design are all the same. 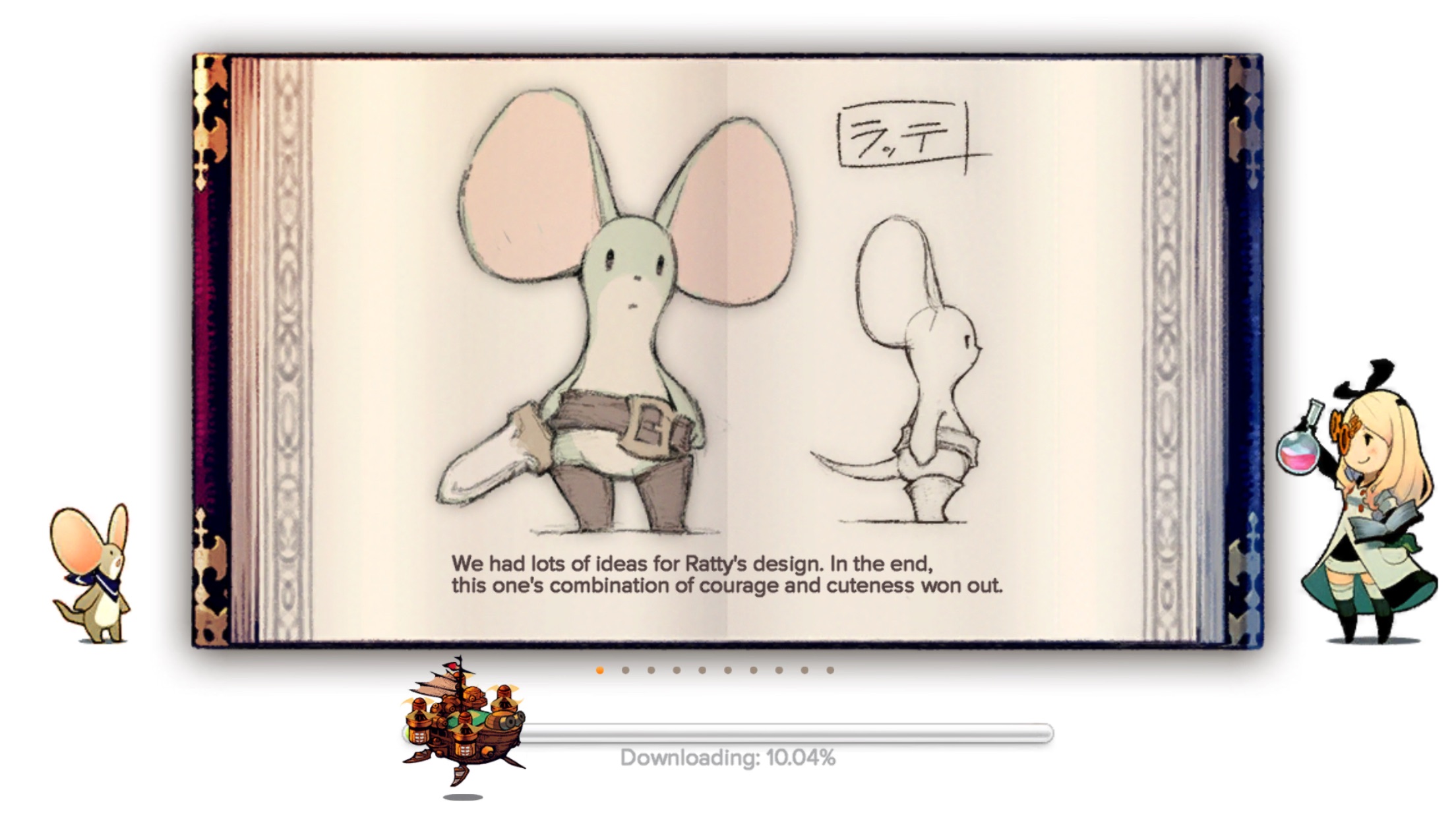 To compare the two, however, the Japanese version was launched about a year and a half ago, so there’s around a one and a half year gap between them. We’ve made quite a few changes to the game balance in that time. Many of the changes we’ve implemented are for the PVP elements. We made it so that there’s much more of an emphasis on having good strategy when you’re battling other players. We also wanted to ensure fairness in the battles, and that playing skillfully is required. So we made a lot of improvements in that area. The international version benefits from launching with all of those changes in place.

TA: With international players playing on the same servers as the Japanese players, will you be doing anything to address the balance issues that giving one region a head start might create? After all, Japanese players have had about a year and a half to play the game and build up their forces.

YO: So, players will be together on the same servers, but we’re not going to be putting brand new overseas players against top Japanese players and having them get squashed. I have to apologize a little to our Japanese players for this, but to accommodate all the new players coming in from the international version, we are probably going to make it a little easier for users to acquire and level up Champs. That being said, it’s going to take time to catch up to the top players, but it will probably take less time to do that than it took for those players to get there to begin with. In any case, you won’t be having an experience where you just keep losing battle after battle. We’re going to make sure that the balance is properly adjusted so that doesn’t happen. Before long, I think we’ll see overseas players on more or less equal footing with the Japanese players.

TA: So, with the Japanese players playing alongside English players, is there any sort of communication in this game? How is that being handled, if so?

TA: How do the social/multiplayer aspects of Battle Champs work? Many Japanese games seem to focus on co-op multiplayer, but many Western players prefer to compete with each other. 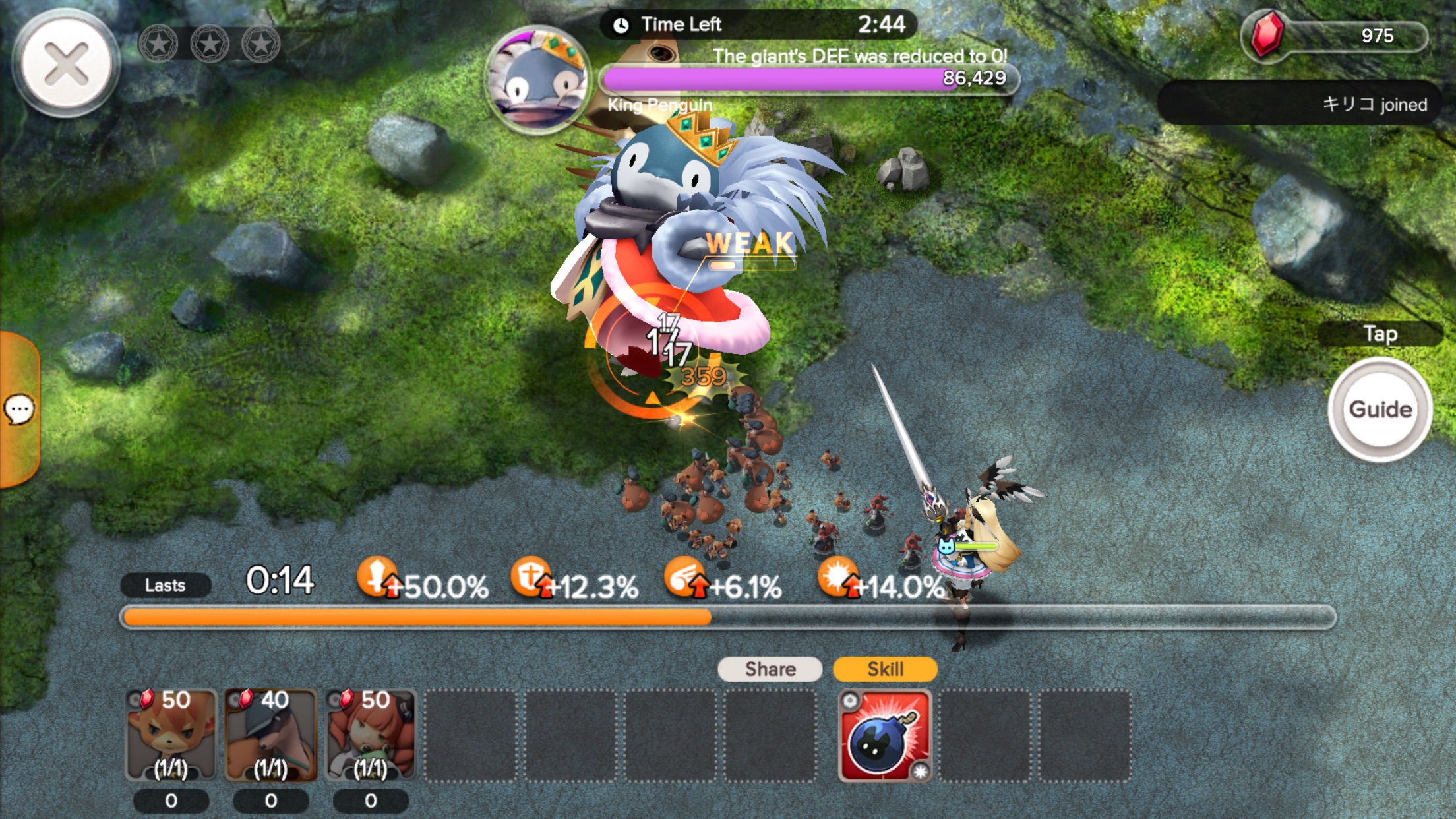 YO: In Battle Champs, we have both co-op and competitive multiplayer available for players. There’s the option where you can go to another player’s airship and try to destroy it, and they can do the same to yours. Crews can also battle one another. There are also individual rankings that are reset once per month, where you can compare against other players.

On the other hand, there’s also the co-op Giant battles where you join with other players to fight. So we have co-operative gameplay where you work together, and competitive aspects where you are fighting against other players.

TA: In each of your personal opinions, what is the one coolest thing about Battle Champs? You can only give one point.

YO: Just one each?

(Okada and Yoshida look at Matsura expectantly, everyone laughs)

SM: Uh… well, I think one possible answer that I could give is that the characters are very, um, uniquely Japanese. They’re very cute, they’re very cool. But I’d have to say for my real answer, I’ve worked at a number of different jobs for different companies, and what’s really great about Battle Champs is that the operations are really solid. What I mean is, there’s a lot of consideration and care for the users, and we’re trying to make sure it’s a great experience for all the users. We’re reaching out and connecting with all of the users, and putting in a lot of elements for people to come and play with in the game. I think that’s the really great thing about Battle Champs.

AY: Well, if I’m told to say just one, I’d have to say the visuals, because that’s the answer that I’m supposed to give. (laughs) But I would say we have a lot of people who have experience with console game design, and doing high-end design with 3D graphics, and they’re all really amazing people to work with. So being able to develop this game with them has been great for Battle Champs. Also, with the UI, we put a lot of effort into making sure that it worked really well, and that it handled great. We wanted to make it very intuitive and easy to work with. It’s possible we’ll see some differences between countries about that, but in general, I think that’s a really strong part of Battle Champs.

(At this point, the localization director for the game jumps in to explain about how careful attention was put into the UI particularly with regards to editing your party. This was seen as very important due to how many Champs there are in the game. The director demonstrates on a tablet.)

TA: It looks good. It also seems to run very smoothly. That’s a complaint a lot of readers have about Japanese social games, that they have too much loading and lengthy waits between screens. But this is nice and smooth.

YO: Well, it could just be because of the device itself. (laughs)

AH: We’ve been continuing development for over a year, and the devices are getting better. (laughing)

YO: At first, we were a little over-spec.

AH: We may have made the textures on the airship a little too awesome, so… (everyone laughs)

TA: So, what’s your one favorite point about the game, Mr. Okada? We’re running out of time, so this might be your last shot.

YO: I want to say “everything". If there’s one thing I definitely want players to look at in the game, it would be the airship itself. This is getting a little bit into Mr. Yoshida’s territory, but, um, there’s a great deal of detail and workmanship that has been put into this airship. I think we spent six months? It was one person working on it, but six months for that person. Anywhere you look on the airship, there’s a lot of detail, and there’s so much to look at that you could probably spend a lot of time examining it without getting bored. 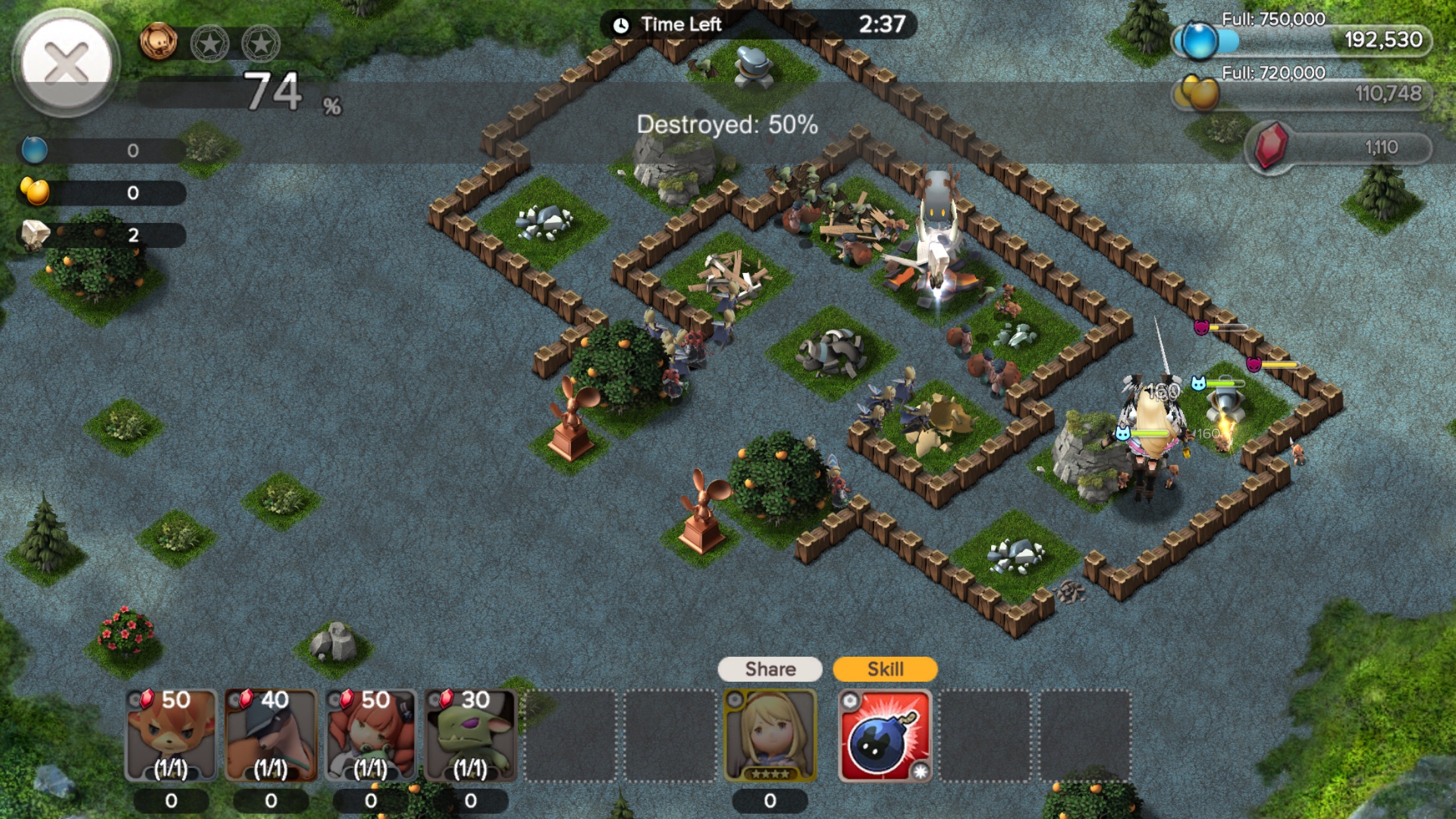 This is going to change in the next version, but right now it’s Japanese summer on the airship. There are lots of summer elements set around the ship. But as the seasons change, the details on the airship will change as well. In the autumn, we’ll have the leaves change color, and in the winter there will be snow in places. Please watch for these changes.

TA: Well, thank you all for your time. Finally, do you have any last message you want to share with our readers about Battle Champs?

YO: I would say in general, looking at the game, we’ve had a lot of people work on it. As a result, the graphics, the sound, all the aspects of the game are incredibly high-quality. I would say especially compared to other real-time strategy games, it’s a very high-quality game. We’ve been operating the game in Japan for quite a long time, so we’ve been able to implement a lot of adjustments and improvements. All of the various features have been refined in that time, so I think the game feels very good to play. The strategy in the game has been set so that even expert players won’t be able to just blast through it. They’ll have to actually think about their strategies and be very careful about what they do. I would love for your readers to come and try out this game.

While the Japanese players have been playing for a while, we haven’t set up the game such that it’s impossible for overseas players to catch up. Rather, we hope that you will build up your skills and get to the point where you can enjoy the PVP and work with the Japanese players on the same level. Please give Battle Champs a shot!

A big thank you to Mr. Okada, Mr. Yoshida, and Mr. Matsura for their time. I’d also like to thank DeNA for facilitating the interview as well as providing live interpretation. It was exciting to get to talk with some veterans of the Japanese game industry and see their latest project. The overseas version of Battle Champs is available now, so feel free to check it out. We’ll be putting together a review once we’ve tested the game thoroughly. Thanks for reading!