Every now and then, a game comes along that has wonderful ideas, but sadly fails to live up to the promise of those ideas. Mainly because the awesome ideas are either under-funded or come from inexperienced developers. That’s the case we have today, but when I saw this game, I could not pass it up. Not only did it look super hectic and crazy, but it’s pretty unique in that it’s both a castle defense and an endless runner. Endless Defense? Castle Runner? Anyway, in this case, your castle is a gargantuan pedal to the metal tank, and it isn’t stopping for very much. I give you Mega Tank (Free). 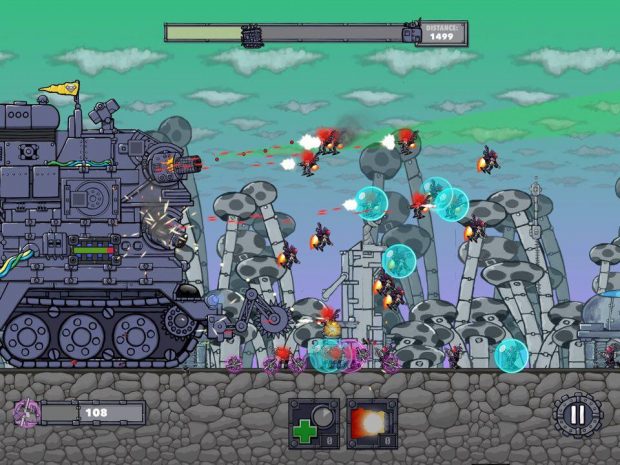 This is the debut title of a developer named the Game Gardeners. What it lacks for in polish, it makes up for in heart. The name of this game is excess. Well, not the actual name of the game, but you know what I mean. Good, old fashioned, red blooded, American, “Bigger is Better" excess. Bigger tanks! More Weapons! More enemies! Better weapons! A giant metal boxing glove that actually punches enemies to death! More bugs! More IAP extortion tactics!

Okay, so a couple of those things weren’t exactly positive. Like I said, the game is flawed. But it’s still really freaking cool, and free, so let me tell you a bit about it. The story is told entirely in 2 sentences on the App Store page in the game’s description. Not really the focal point. You are old robots and the corporation that produced you wants to recycle you for new high tech versions. Middle, middle, middle, screw that, we have a comically large tank, stop us. You’ll ride from checkpoint to checkpoint, presumably set up by this robo-resistance, where you can use the scrap that you collect to upgrade and pimp your deadly ride. 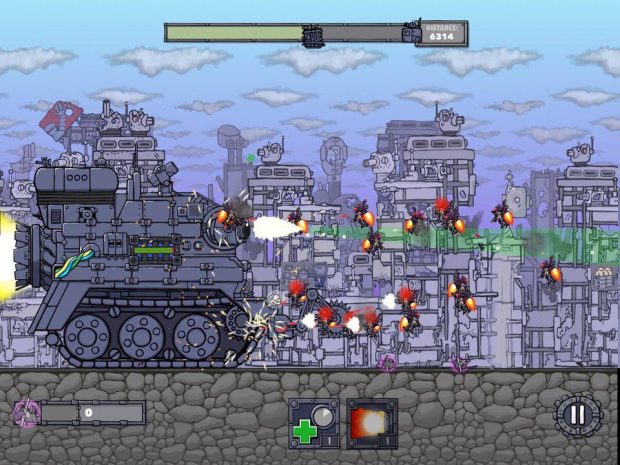 You start out with one gun slot and a ground level weapon to take out anything that gets too close. But as you upgrade the chassis and make the tank even freaking taller, you get 2 more gun slots, 1 of which can be used to launch mortars, 2 auto gun slots that shoot at anything that gets too close, and more power-up slots. There are focused weapons like Gatling turrets, giant snipers, and lasers, as well as spread weapons such as gargantuan shotguns, heat-wave beams, and freaking lightning guns. Power-ups range from stuff like healing and instant reloading, a rocket boost, shield, scrap doubler, satellite laser of doom, and so forth.

The real joy in this game is discovering some deadly new weapon or weapon combo that just ruins anything stupid enough to stand in your way. But there are so many options and not much guidance. Here’s what I’ll tell you now. Buy with your heart. Don’t even try to buy every gun in a row, because you will have a hard time and likely be bored out of your mind. The first two guns in the accurate gun slot are way too similar to the starting one, and you’ll be given a terrible first impression. Actually, most of the guns in that area are underwhelming, and not even very useful. Jump immediately over to the spread stuff. Once I had two spread guns, I rarely ever looked back. The trident shotgun covers nearly half the screen in death, and the lightning gun? Oh dear Zeus in heaven, the lightning gun. I adore it. 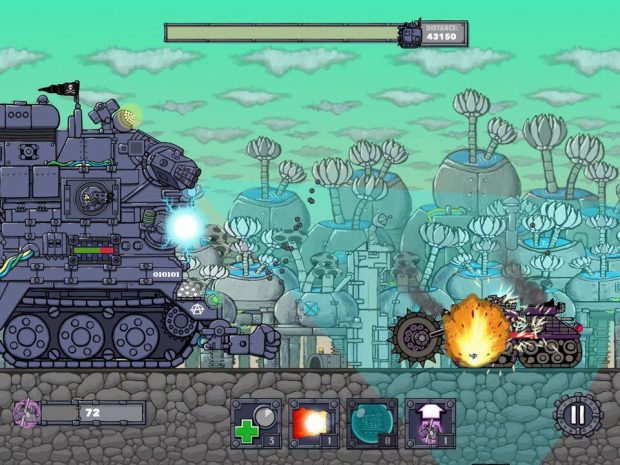 The problem with this lack of guidance is that you’re not sure how to spend your money, and might end up wasting it and being ever more temped by that IAP. It’s kind of dumb. For one thing, when you first start playing, you’re likely to notice that you can heal your tank at checkpoints. Once you take a good amount of damage, it will cost hundreds and eventually thousands of scrap. But you can bypass this entirely with one 300 scrap health power-up. The difference is that you need to equip it to one of your power-up slots and use it during gameplay, but so what? It is insanely cheap. Likewise, you never really know where to spend your money, either on new guns or upgrading, and it’s a total crapshoot with almost everything being unlocked from the start. And most of these things are pretty expensive.

This lack of direction leads to weird pacing. Once you upgrade your chassis the first time, you’ll gain access to the second area of the game, along with your 2 new gun slots. This is where the game becomes truly fun, as you get much more scrap and can experiment more frequently. It will still be a grind to save up for the third chassis upgrade and third area, but it won’t be quite as repetitive and boring. I have one major hint for you though. Always make use of the scrap doubler. When you defeat large waves of enemies, or even bosses, you’ll see the scrap fly out of them. It takes a couple seconds to actually be collected by you. You can actually activate this doubler after the scrap shows up on screen, and really make bank. 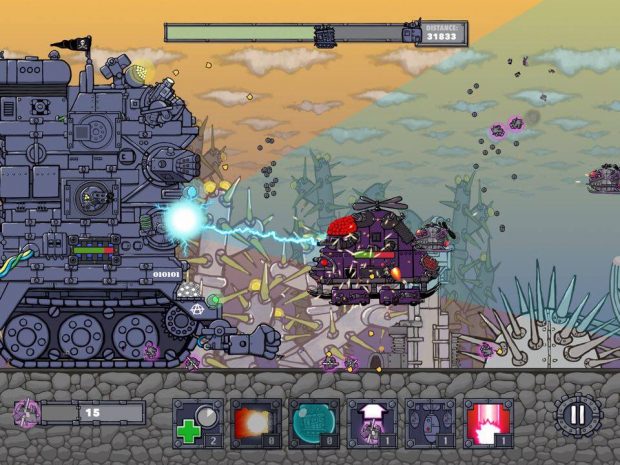 You can plan around this too, as each world basically takes you through the same 10 checkpoints and boss fight, just with more difficult enemies each time around. To save more money it would be smart to avoid decorating your tank, as it’s purely a cosmetic feature, but where’s the fun in that? You can also watch advertisements for scrap and golden gears, but like most of the amateurish games with this option, it doesn’t work half the time and you’ll have no idea why. Sometimes you can watch 10 ads in a row, and sometimes only 2.

I have to talk about some of the other issues. One is the mission system. Like most mobile games, there are missions that rotate out, such as killing a certain number of enemies or using a certain power-up a certain number of times in one run, but in this case these seem totally randomized. One of the earliest missions I got was to kill 300 of an enemy that didn’t even show up until the third world. There are also some bugs, which the developer is trying to fix, but they’re numerous. I’m fairly sure I completed a mission without it going away for one. There’s also a zero health on mission start bug, which is supposed to be fixed, but I still had it happen to me once. Restarting the app usually fixes things. I don’t know if it was a bug, but I did get to upgrade my health/armor to max completely for free at the start of the game, not that I’m complaining.

There is a lot to love here though, friends. There is a claw prize mini-game every time you die and you can easily get loads of cool stuff. Including special weapon parts and golden gears. The rare currency of the golden gear can be used to upgrade the coolest weapons, or to instantly build the special weapon that you collect parts for. It is basically an all powerful explosive round machine gun, and once it runs out of ammo you have to rebuild it from scratch, but it’s a glorious moment. The art style is very cool, if a bit inconsistent in quality, and looks like a Kongregate flash game to me. The sheer carnage that you can unleash is just too much fun. Game Center and Everyplay are supported, along with iCloud saves. This likely isn’t going to be your new favorite game or anything, but it’s definitely worth downloading for the novelty.