Ackeron ($0.99) is remarkable for a few reasons. First, it’s a remake of a 15+ year old Palm Pilot game, which I can assure you is not something you see every day. Second, it’s a large, complex, single-player RPG from an indie developer, something that is becoming rare these days on iOS. Perhaps the most amazing thing about it is just how much effort seems to have been put into this remake. Ackeron could easily pass for a new game on iOS, though its mechanics might quickly disabuse you of that notion. When a developer puts that kind of work into a remake, it’s easy to see the passion behind the game. Indeed, Ackeron feels like a massive passion project, but it’s also a surprisingly enjoyable RPG if you can stick with it through some of its bumpier parts.

In Ackeron, you play as a nameless character who is traveling through space to try to find a way to save Earth’s sun. On your journeys, your ship is shot down by the planetary defense system of Ackeron. You emerge from the wreckage only to find yourself in hot water, and no sooner do you get your bearings than you’re being sent off on various tasks for the locals. Basically, the planet you’ve landed on might have just what you need to save your home planet, but you’re going to have to save their world first before they can even try to help you. At first glance, Ackeron might remind you of a JRPG, but its mechanics more strongly recall the late-1980s/early-1990s Western CRPG era. There’s a lot of sub-questing, exploration, puzzle-solving, and turn-based battles where both sides miss each other more often than not. 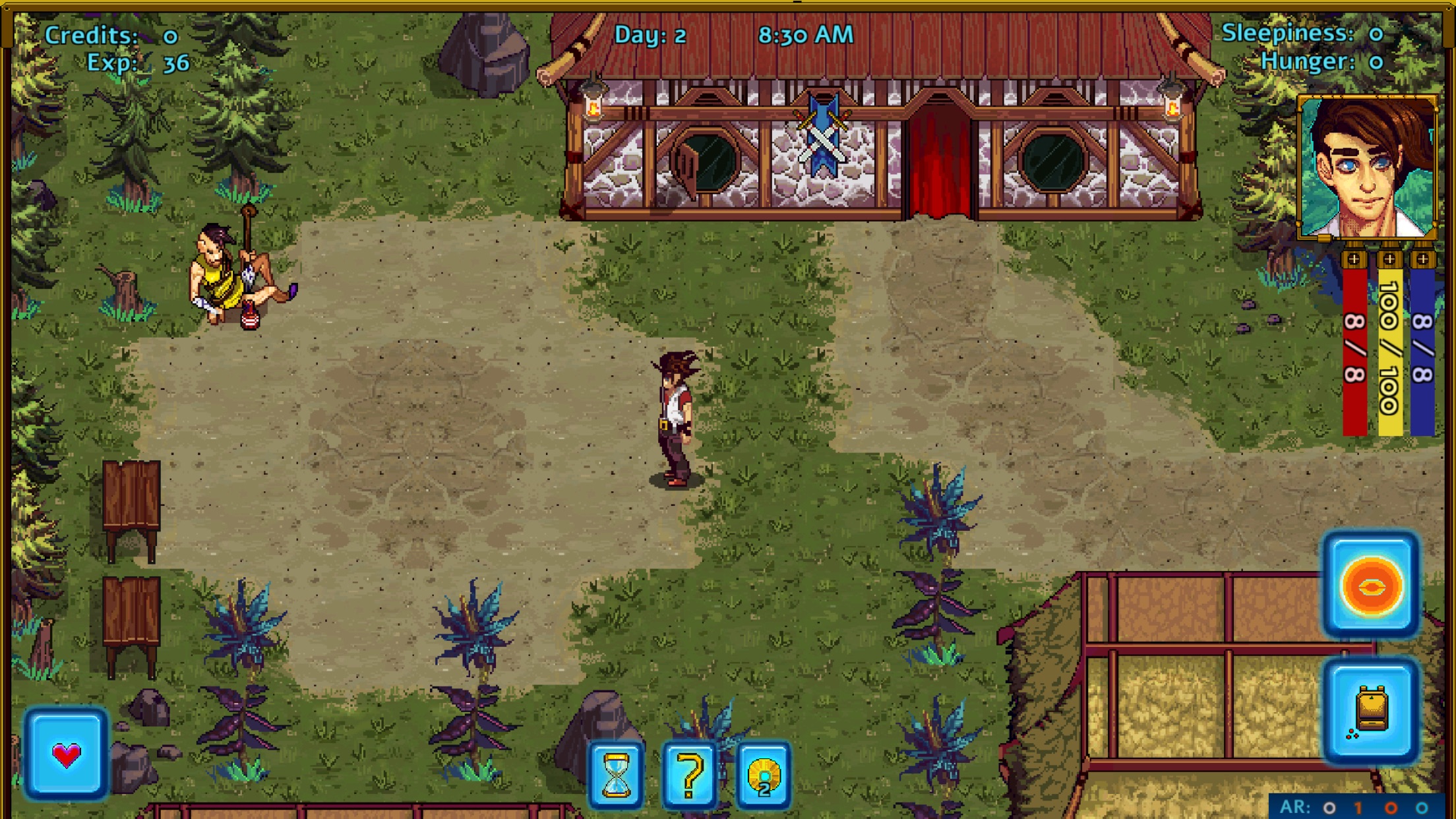 All of this is particularly tiresome in the early stages of the game. You just want to be out there having an adventure, but instead you’re doing odd jobs, trying to scrape together enough money for training, a room over your head, and food in your belly. When you do venture out, you’re fighting low-level enemies that fortunately miss you at least as often as you miss them. Your hit points are low enough that a bit of bad luck can knock you out, and since you can only save a few times each in-game day, you can’t mitigate that with frequent saves. To be honest with you, friends, I almost gave up on Ackeron in the beginning. The game seemed to alternate between boring and frustrating in its early hours.

If you stick with it, though, things get quite a bit better. Improve your stats and you won’t be missing quite so much. Get enough extra cash and you’ll have items to bail you out if you get in trouble on the road. The sub-quests start to get more satisfying, and your character begins to take shape in your favored direction. You’ll also start to get an appreciation for how big the game is, and how much it has to offer. That doesn’t mean Ackeron never gets frustrating or slow again throughout the game, because it certainly does. There are occasions where the whole thing sort of grinds to a halt while you farm up extra cash or experience points necessary for survival. But once you’ve seen some of the light, it’s easier to push your way through the darker patches. 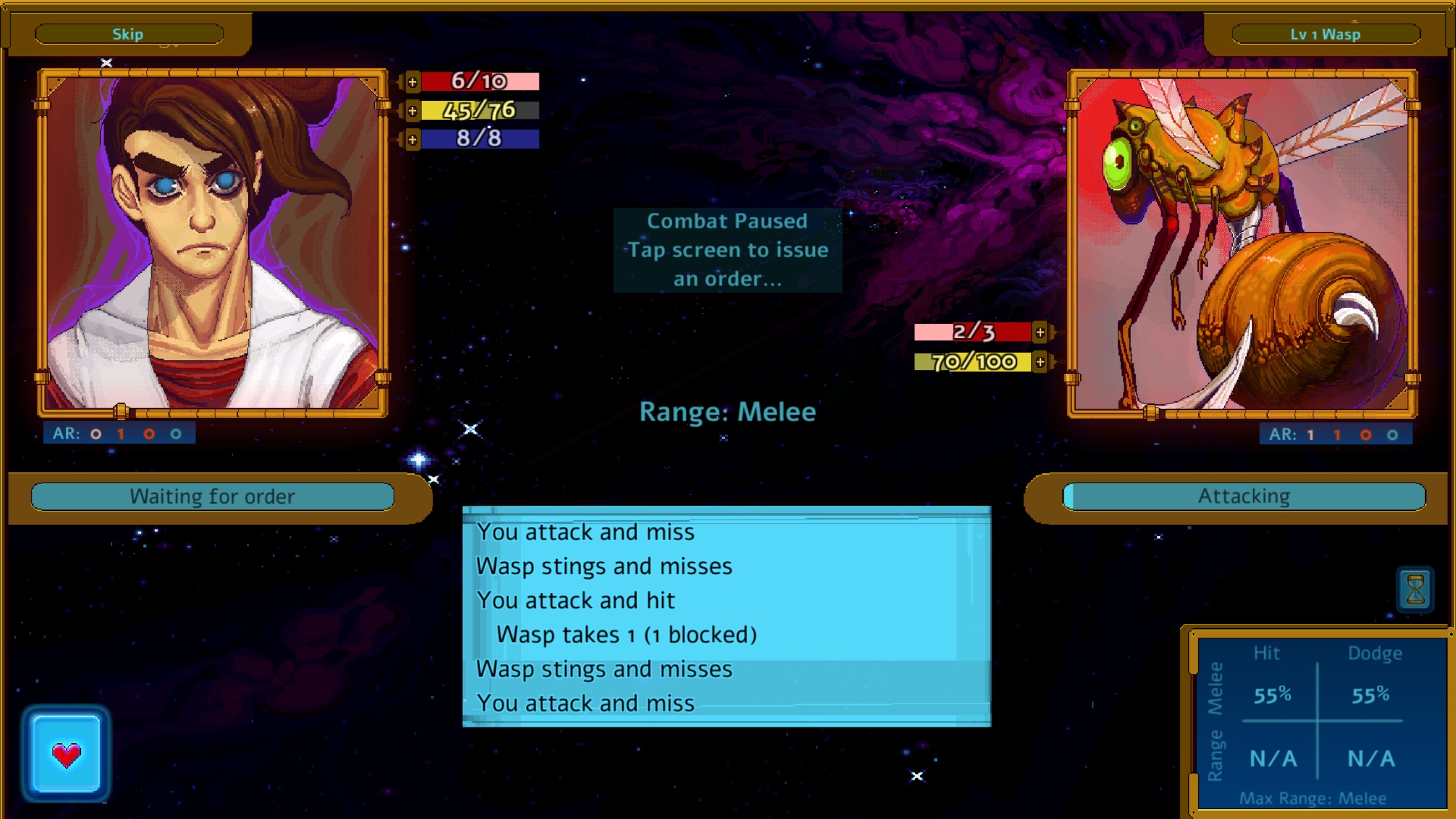 The battle system feels like it has a lot of possibilities, but in practice, it’s not terribly different from most turn-based systems. Each round, you and the enemy get to take an action. You have a variety of choices at your disposal. In addition to the usual fare like attacking or using magic (called psionics here), many of the choices are connected to the battle system’s most uncommon element. Namely, you have to consider the distance between you and your foe. This is again something seen in CRPGs of a particular era, but it’s used quite well here. You can do a charging attack, simply try to close the distance, or if you want to run away from the fight, you can back away. All of the actions you can take in battle come at a cost of stamina, and if you run out mid-fight, you’ll collapse and get a game over. You can rest mid-battle to restore some stamina, but you’re obviously vulnerable while you’re doing that. This system keeps you from just charge-attacking like a maniac in every fight.

The downside of the stamina business is that as you get farther into the game, you’ll hit areas with a lot of battles. If any of those battles go badly, you can find yourself in a real pinch stamina-wise. Now, there are ways to rest in the field, but unless you build your character in a particular way, you’re probably going to have some serious stamina issues. Stamina also makes it difficult to run away from an enemy if you’re losing, which is usually the time you’d want to be running away. If you’ve spent some of your stamina attacking, you might not have enough left to beat a retreat should the enemy decide to pursue. Early in the game when you’re prone to long bouts of missing, you may very well pass out from zeroing your stamina more often than you’ll run out of hit points. It doesn’t break the game, but it certainly curbs the enjoyment of combat quite a bit. 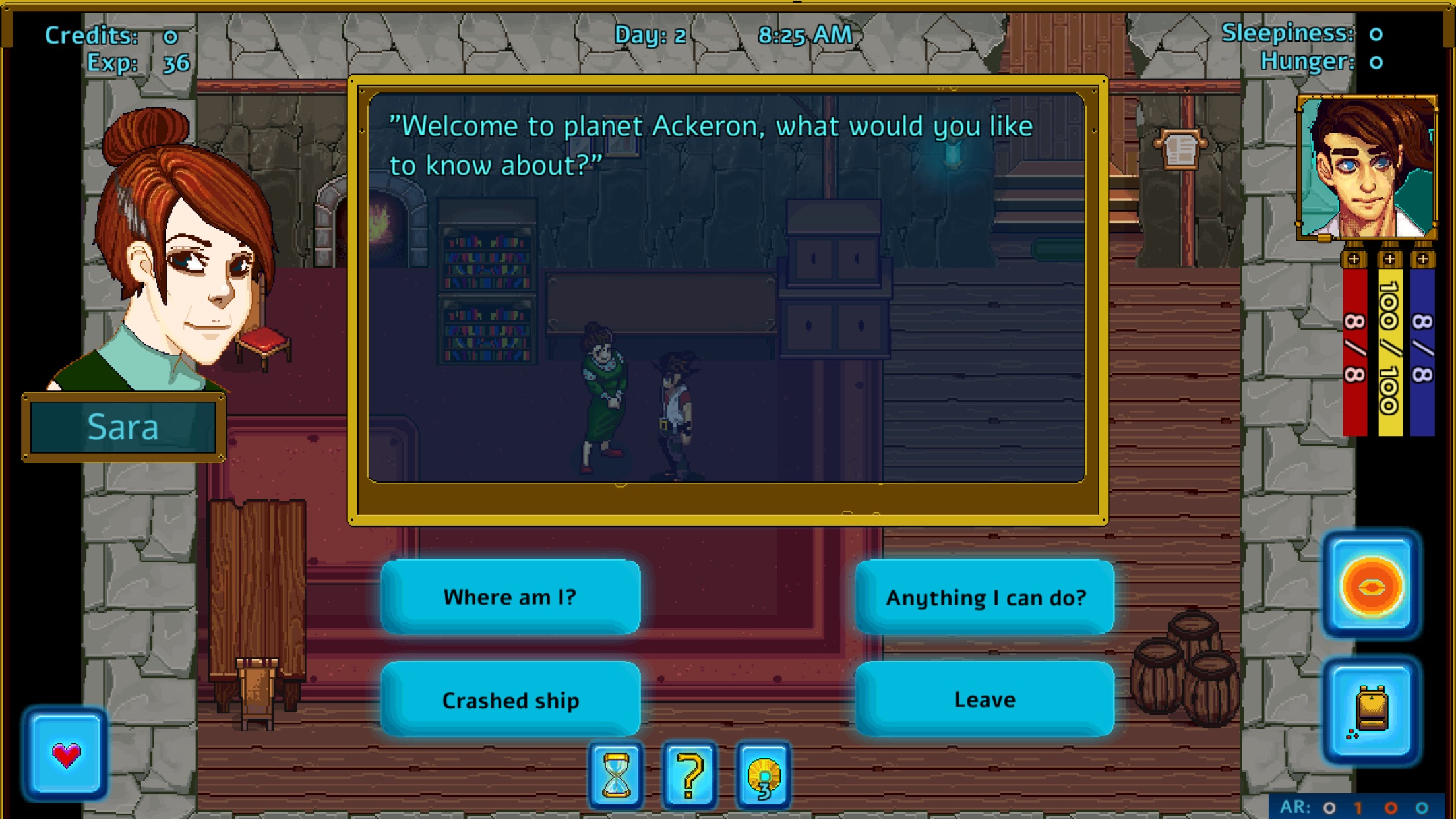 As you play through Ackeron, you’ll have the opportunity to join one of five guilds, each focusing on a particular trait. For example, the technology guild will help you boost your tech stat, giving you access to some very useful items, while the psionics guild focuses on building up your magical abilities. When things get tough, each of these specializations will help you in different ways, which ostensibly adds some replay value to the game. Depending on how much you indulge in side content such as trading goods or running through the game’s battle arenas, Ackeron can be a pretty long game, so I’m not sure how many are going to want to roll another character after they finish. It’s nice to at least have some different builds to work with for those that do, however. The game helpfully allows multiple save files, so you don’t have to wipe out your previous character to try a new one.

The controls are a little weird at first, but once you get used to them, they’re functional enough. To move, you just push in any direction. Actions on the map are performed automatically, and there are a few virtual buttons on the screen for opening various menus. In battle, pressing your finger down on the screen will bring up a sort of ring-shaped menu that you can choose from by sliding your finger. Simply tapping will repeat whatever action you took the previous turn. You’ll want to pay attention to that last action, because it’s awfully easy to forget that you have to hold down your finger to change what you want to do. This is probably as good as place as any to talk about the save system. The game keeps auto-saves at certain points, but you can make three hard saves per in-game day as well. The auto-save often leaves long gaps between saves, so make sure you’re using those hard saves. Time doesn’t pass especially quickly in-game, but you can always stay at an inn if you’re near a town to restore those saves before heading out again. 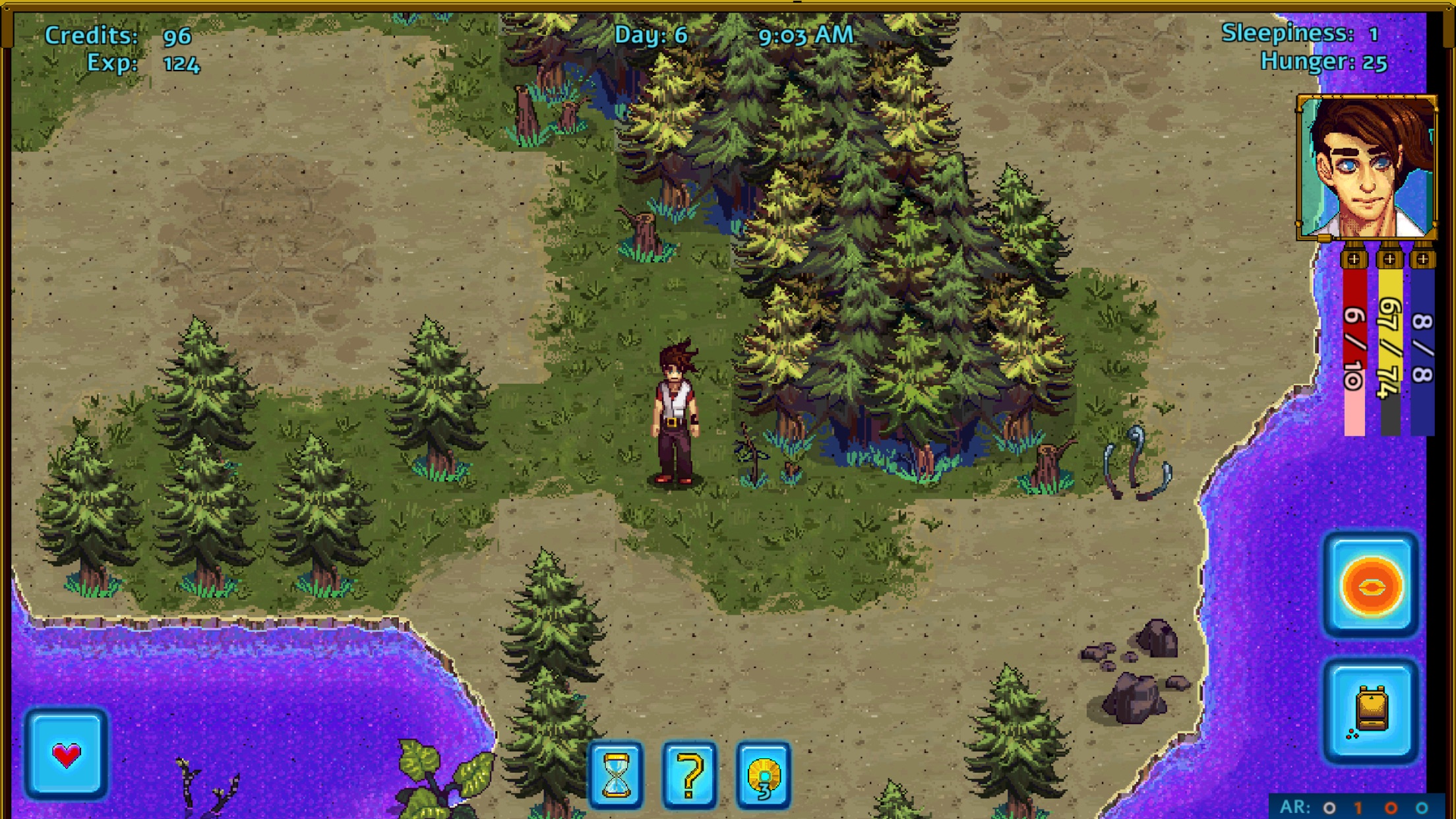 While the game shows its age mechanically in many ways, the updated visuals are quite nice. There are lots of bright colors and you’ll travel through a variety of environments on your travels. It rarely looks as alien as it ought to, but little touches here and there will remind you that you’re not on Earth anymore. The animation is a bit sparse and stiff, unfortunately, and the scrolling is quite jerky, so keep that in mind if that sort of thing bothers you. The audio is quite nice, with some solid battle effects and pleasant enough music. The game even has support for in-app leaderboards, which is a pretty curious feature for this sort of affair.

As a remake, Ackeron is wonderful. If you were one of the many people who wiled away the time on their Palm Pilot playing this game, you’ll have a blast going through it in its shiny new form. If you’re coming into it cold, just be prepared to put up with some quirks and a somewhat merciless difficulty curve. I think it’s absolutely worth hanging in there, as the overall game is quite enjoyable, but it doesn’t do a lot to hide which era it sprang from. I suspect many players will be turned off by that aspect of Ackeron, but those who persevere are in for a treat.