It’s interesting watching the flow of game design over time. While it’s sometimes painful to watch established game designs hop from a paid model to a free-to-play set-up, those very same free-to-play hits have now been around long enough to start inspiring developers to travel that road in the opposite direction. The basic structure and look of Dungeon x Balls (Free) seem heavily informed by social RPG sensations like Puzzle and Dragons (Free), but rather than send the player down an endless rabbit hole of collection, evolution, and battling, it opts for a more traditional style. You’ll find new characters with their own special abilities, battle boss creatures, and work your way through the story, and while there are IAP, they’re solely of the cosmetic variety. Best of all, its core gameplay mechanic feels intuitive and fresh, a difficult thing to accomplish in the wildly crowded mobile market.

Each of the game’s 100 stages takes place on a single screen filled with enemies, traps, obstacles, and collectible goodies. During gameplay, your characters take the form of balls that you can fire from the top corner of the screen by tapping. You can fire as many of them as you want, though there is a limit to the number that can appear on-screen at once. Your only real limit beyond that is your life meter. If your balls hit anything dangerous or sink down the bottom of the screen, you’ll take damage. Run out of life, and you fail the stage. Generally speaking, it’s not too tough to clear most of the stages in the game without dying, but getting three stars on each stage requires a steady hand. As you collect stars, you’ll reveal portions of some really well-drawn art, eventually creating full pictures you can view whenever you like. You’ll also earn stat upgrades for your characters, allowing you survive longer. 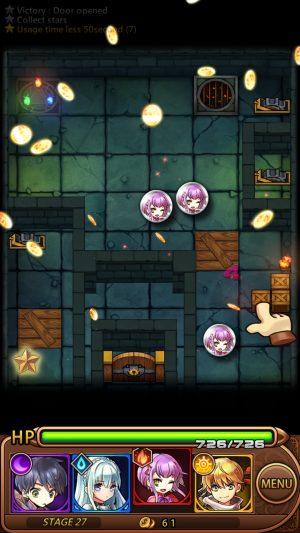 Your goals will vary from stage to stage, but typically you’ll be defeating a boss enemy, trying to collect a treasure chest, or going through a door. Each stage also includes some sub-goals to go for, like finishing within a certain amount of time or destroying all of the objects on-screen. Achieving these goals requires that you use the right characters for the right situations. No one can clean out wooden objects quite like the fire-based girl you get early on, but if you need to open doors or locked chests, the shadow-based thief is the way to go. Each character has their own special ability and is affiliated to one of several elements. Enemies come color-coded as well, so taking advantage of each one’s elemental weakness is a basic strategy to keep in mind. Of course, depending on your goals, you might not want to kill an enemy quickly.

You’ll start the game off with a single character, earning more at specific points as you progress. Once you’ve unlocked them, you can take them back to earlier stages if you like. If you’re having trouble clearing a particular goal, that can offer some relief. Since your stats will be improving as you play through the game, you can also benefit from returning to earlier stages with a beefier life bar or stronger attacks. Clearing stages also helps you upgrade the house your characters live in, which provides a cosmetic benefit but also contributes to your character stats. The house itself represents the only IAP in the game, allowing you to buy cosmetic upgrades that display the game’s characters doing various actions. Otherwise, Dungeon x Balls is very much a game where what you see is what you get. 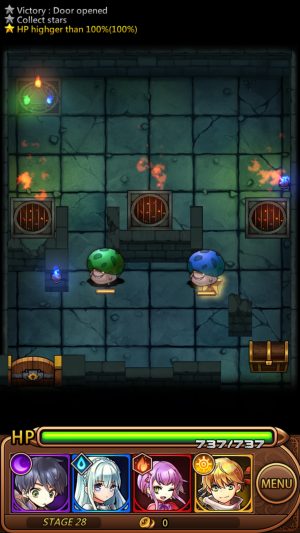 While it’s relatively easy to lob the balls in the directions you need them to go, there’s another layer of technique that’s a bit more difficult to get a handle on. You can tap the balls directly to get them moving again, and you can also flick your device to send any settled balls sailing off again. Many of the sub-goals require you to use these techniques well, and they’re just a little bit too fussy in how they work to be reliable. It’s one of the biggest issues I had with the game, and while it’s hardly game-breaking, it did make some levels an exercise in frustration. Even when I was able to finish those goals, I never felt like I had earned them, only that I had happened to get lucky. The English translation can be pretty iffy at times, but it’s not exactly a text-heavy game, so I tended to find it more endearing than anything.

Dungeon x Balls includes Game Center support with two leaderboards and a set of straight-forward achievements. While it might look like a social RPG in screens, you don’t need to worry about stamina meters or online requirements here. It’s totally offline, and you can play as much as you want without worrying about timers. In terms of other options it’s a bit light, and I’m not sure how much replay value the game offers once you’ve cleaned out all of the stages, but I feel like it has a good amount of content for its concept. The stage count is high enough to feel like you’re getting a lot, but low enough that virtually none of those stages feel like meaningless filler. I could see the game expanding more in the future, particularly if additional characters with unique abilities are added, but what’s here is quite fine if that’s all the game ends up being.

The unusual ball-shooting mechanics, strong level design, and overall good art make Dungeon x Balls worth checking out. While I’m not a fan of the the flicking controls in particular, everything else works well enough that the overall game is still very enjoyable. The sub-goals add a tough but attainable challenge to the game, and there’s enough variety in terms of obstacles and tricks to keep you going for the whole game. A little pachinko, a little pinball, Dungeon x Balls is a cool example of a paid game that has learned some good lessons from free-to-play.