In the fleeting ecosystem that is the App Store, games live and die by the strength of their core concept, and how well the developers are able to execute such pivotal ideas. Owing to the ease of development for iOS, there are innumerable innovative ideas in games – in terms of raw numbers of releases, eclipsing virtually every other platform out there – yet it is still rare to see them implemented with the quality and distinction of Combo Critters (Free). While it would be easy to draw parallels to Pokemon, and the creature catching action isn’t particularly unique, Lucky Kat Studios manages to shake up the formula enough to stand alone as its own game. By being able to fuse critters together, amalgamated with an incredible sense of charm and whimsy, Combo Critters is an extremely enjoyable experience that has a lot of potential to expand, grow and develop in the coming months. 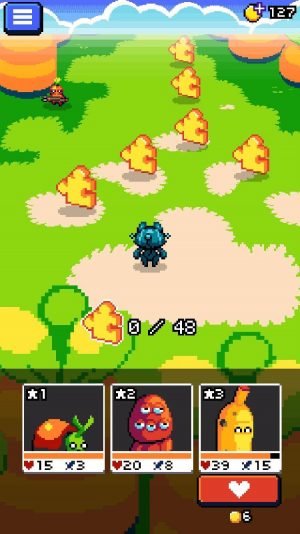 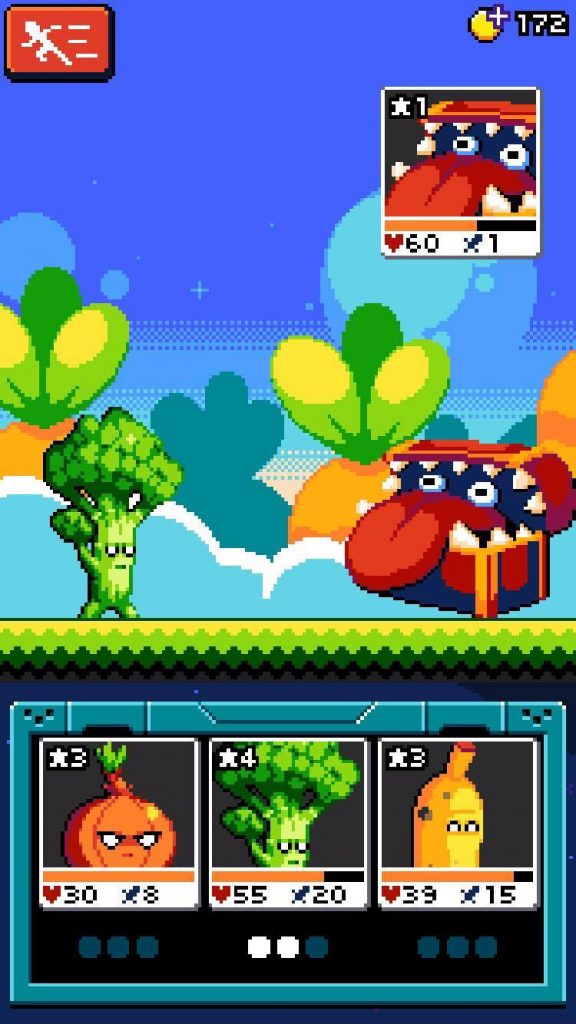 Looking at Combo Critters purely at face value may insinuate there isn’t really much to the game – after all, it is a free, casual title on the App Store – but this is an unfair assumption to make. You play as an unnamed, creature collecting cyborg, and must travel through six planets to defeat monsters for coins, possibly recruit your vanquished foes as you go, and ultimately take on a boss, which will let you then create more powerful critters and let you progress to further planets. However, you are able to fuse any two creatures together to create a stronger or weaker alternative, depending on the respective levels of the critters to be combined. Battles are turn based, and each beast has a health stat and an attack stat, so creating the most powerful monster through the fusion mechanic and assembling a fearsome team is pivotal to becoming the master of the Combo Critters galaxy. 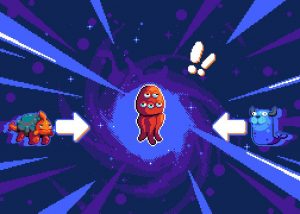 While relatively simple in scope, Combo Critters excels in the variety of creatures that can be created, and the beautiful graphical style that is used to bring them, and the worlds they inhabit, to life. Each critter is brilliantly designed in stunning pixel art, and every one has a unique, humorous name, all of which remain interesting and funny to read throughout the game. The fusion mechanic is also surprisingly clever and flexible – while some combinations are rather bizarre (for example, snail plus octopus equals banana), many do actually make sense and are logical in their progression. In a few creatures, there is a sense of an ‘evolution line’, in that something like a tiny snail will eventually grow into a giant, spike ridden behemoth, and it is great fun to plot this progression throughout the game.

The ability to combine critters is also relatively tactical – there are numerous creatures that are not found in the overworld and can only be created through clever merging of weaker beasts. To collect them all, or even just to build a strong team of the best critters at your level, you will have to revisit previous worlds and catch lesser animals/sentient vegetables to be able to complete your company of creatures. One particularly interesting mechanic I found was the inclusion of a level one critter called ‘Mimic’. Anyone who has played Castlevania will no doubt know the treasure chest that suddenly springs to life as an enemy, and Lucky Kat Studios must have taken influence from this as a similarly named creature is in Combo Critters. While seemingly worthless with only 1 attack stat, I found Mimic to be vital in levelling down stronger critters to discover weaker ones I had not been able to create yet. Ingenuity and flexibility such as this is a reason why the creation mechanic within Combo Critters is so strong, and stays interesting throughout the game. 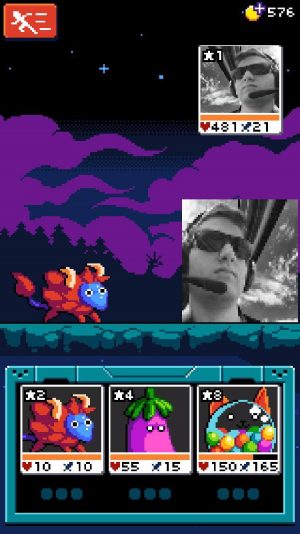 Of course, collecting creatures would not be particularly interesting if there was no way you could throw them into battle. Combo Critters is primarily a turn based RPG (admittedly, in a relatively loose sense), with your avatar having to traverse around large and looping environments in a manner equivalent to the overworld in Final Fantasy, to challenge other enemies, open treasure chests and to collect jigsaw pieces which will then summon the boss creature. When you trigger a battle, there are only really two commands – attack, or flee the battle. The latter can be done for no loss of coins in case you get into a fight you cannot win, however health can be restored after battles through using coins that are collected from free gifts or the corpses of defeated enemies. While essentially spamming an attack button may seen extremely tiresome, and there probably could be some new elements added such as the ability for enemies to block or dodge attacks, Combo Critters throws in an extremely nice twist to this otherwise repetitive formula. Once a creature has attacked three times, it can perform a special combo move, which requires you to perform small mini games such as tracing a line, or tapping orbs in order related to their number, extremely reminiscent of some of the abilities in the Paper Mario series. This mechanic greatly helped to shake up the battling, and in some of the harder showdowns against multiple enemies, brings with it a tactical choice on what creature you may attack with next. 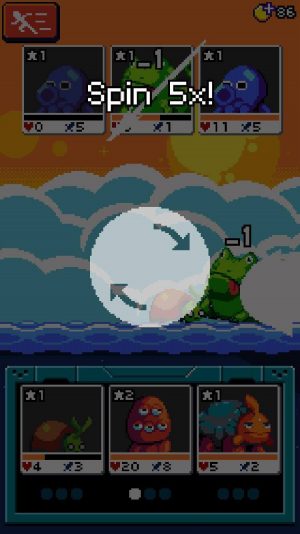 It shouldn’t come as any surprise to fans of Lucky Kat Studios’ previous titles such as Sky Chasers (Free), but Combo Critters is stunning, both graphically and from an audio perspective. So many times retro graphics have been used as a lazy way to avoid having to conjure up more detailed adesigns, however Combo Critters masters the art of pixel graphics in a way that is almost unprecedented on the App Store. Everything – from the environments to the actual creatures you can collect – has significant attention to detail in its design, and harks back to the zenith of 32-bit pixel art graphics on the Game Boy Advance. Furthermore, each planet has its own audio track that generally tends to coincide with the varied planets, ranging from a lava world, a vegetable haven full of edible critters to collect and a candy paradise. The creatures are also tied into each world, and ensure there is a variance of what you can see in each location. Being able to battle Twitter accounts is also an amusing, if whimsical, addition, but one that does help the longevity of the game nonetheless.

And there lies my only main concern with the game – its length. The developers have promised further worlds and critters to collect, and there are 66 in total in the base game which is a relatively substantial amount, but the game does fly by when you learn the best tactics to progress through the game – I managed to catch every creature in under three hours without buying any coins in-game. Normally in the CritterDex (if the allusions to the Pokemon series weren’t pervasive enough), there is one creature which is second top of each level class, right below the boss. If you manage to assemble three of these, even the hardest enemies in that particular world are blown away without a second thought. While I did have an awful lot of fun doing so, there is very little reason to keep playing Combo Critters after you have collected them all, which in itself is a pretty aimless task considering there is no reward to incentive to do so. Adding social elements such as trading or battling creatures would go a long way to alleviate this, but even though it is more of an inherent problem with the type of game Combo Critters is, there will always be some sort of wall or end point to the adventure, and unfortunately it comes too soon for anyone looking for a long term experience. 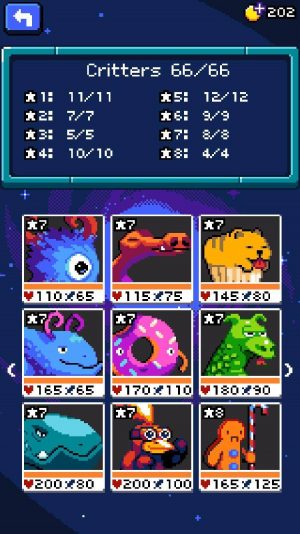 There are some other teething issues with Combo Critters that do lead to a bit of frustration, but can be overcome through pure determination to become the best critter collecter in the galaxy. To the developer’s credit, each world is relatively expansive and there is quite a lot to explore. However, this does mean that collecting all of the puzzle pieces required to trigger a boss fight, or even finding the boss in the first place, can become a frustrating endeavour, and eventually boils down to pure trial and error. Similarly, when attempting to create certain creatures that you may have made before, it can become difficult remembering how you actually did so, as some of the later combinations can become slightly less orthodox than simply trying to merge similarly looking critters together. The fact the overworld sprite for every generic enemy is the same within each planet means it is also difficult finding specific critters that may be needed for fusion, without entering and fleeing numerous battles until you discover the right one. Adding a world map, unique overworld sprites and maybe even some sort of creation guide to the CritterDex would certainly go a long way to alleviating these issues, and make Combo Critters more of a streamlined experience rather than one that requires a bit of perseverance to achieve your goals.

Despite this, significant praise must be given to Lucky Kat Studios on how they have managed to create an extremely fair and player-friendly freemium experience. At its core, the game revolves around the currency of coins – these are used to be able to fuse creatures together, recover health of any defeated or damaged partners, and also improve the odds of collecting any downed critters in battle. Thankfully, Combo Critters provides a lot of these through daily rewards, by watching an optional ad (there is an option to remove these for $1.99) which is generated every five minutes, or by grinding and defeating creatures yourself. At no point did I felt like the in game currency was unfair or halting my progress; I had just the right coins to journey through the game by only watching a few ads, and anytime I felt compelled for extra funds to create some new blend of creature, it was very easy to do a bit of grinding to replenish my money. For any freemium skeptics, this is an example of how the monetization model is done well, and the developers must be commended for this.

Don’t get me wrong – when my main criticism with Combo Critters is that I want even more to do, it only emphasises how much fun I had with the game. With an extremely strong fusion mechanic that is accentuated through a fantastic art style, genuine humor and lots of charm, Combo Critters is an essential experience for anyone looking for a fun and casual yet deceptively complex addition to their smartphone device. At the very least, it’s the best monster catching game released this week. Gotta collect ‘em all!