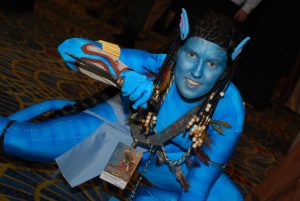 Remember Avatar? That movie with the weird jungle planet filled with blue skinned humanoids getting rampaged by humans that for some reason did obscenely well at the box office? Well, they’re not only making four more sequels (WTF) but they’ve also teamed up with Kabam to make a massive budget mobile game which will be updated and evolve along with the release of the upcoming Avatar sequels- The last of which is scheduled to be released in 2023.

They’re not saying what kind of game it’s going to be yet, but, given what an incredible cash cow Marvel Contest of Champions (Free) has been for Kabam, it only makes sense to combine that with the ultimate cinematic cash cow of Avatar. iOS gaming historians may remember the original Avatar game released by Gameloft all the way back in 2009, which unsurprisingly has since been removed from the App Store. That game was pretty decent for its time, so, maybe there’s hope for this upcoming title?

(Gameplay from the 2009 Avatar game by Gameloft)

Either way, the roadmap of twelve years worth of updates seems pretty insane, and reminds me a lot of what the mobile gaming equivalent to the Deep Thought project from Hitchhiker’s Guide would be. I’m sure James Cameron and friends pulled an impressively huge dump truck of money up to the loading dock of Kabam’s offices, but looking at how much things have changed over the last 12 years (I think 12 years ago I was rocking a Palm Treo?) planning a mobile game that’s going to persist that long seems crazy.

Hell, who knows, perhaps 12 years would be long enough for people to come around on the idea of actually spending money on mobile games again? Anything can happen! Maybe global warming will make the price of a cup of coffee so expensive that the comparison to app pricing no longer makes sense and iOS games priced at even the (currently) egregiously high price of $2.99 would seem like an incredible value? …Assuming we survive that long, in the post-Trump post-Brexit forsaken hellscape we’re setting ourselves up for, anyway.