I’m really glad that fighting games are still alive and well. They’re a classic old school genre that has withstood the test of time, and many franchises that were started so long ago in arcades are still with us. Although it’s not nearly as old as Street Fighter, Arc System Works’ BlazBlue has definitely earned the right to be in the same conversation, following up their storied Guilty Gear series with the same amount of flash and style. That partially translates to the mobile arena with a game that’s more beat ’em up than fighter in BlazBlue RR – (Free), but it’s muddled by one of the worst IAP schemes I’ve seen in a while. 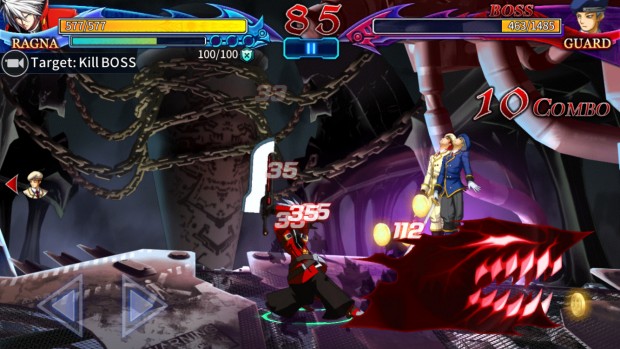 As you can probably imagine, doing intricate chain combos and aerial raves aren’t going to work out so well on a touch screen, which is why it’s been adapted for mobile devices. Players will initially take control of Ragna, who is more than cool enough to show off BlazBlue‘s best aspects. Movement is done by way of a simple left or right virtual d-pad, and tapping the screen initiatives an attack. You can swipe down to slide attack, swipe up to do an upwards slice, and swipe to either side to do a dash attack. From there, players have the option to swipe in another direction to link attacks, or instantly switch directions. It’s fast, fun, and intuitive, and all of the action that happens on-screen will make you feel like a pro. There is a move-list, by the way, so it isn’t all just random tapping and swiping — there is a strategic element to it.

I used the term “beat ’em up," because really, although it’s connected by a tenuous story (mostly involving short interactions with other major characters), it really is more of an action game. You’ll move from zone to zone fighting other NPCs, mostly which are fodder. Occasionally players will face off against a boss character that might require some more finesse, but it’s usually on the simplistic side. That’s not to say it isn’t enjoyable, because I could spend hours looking at this art style, and the mindlessness of being able to move from stage to stage, upgrading your equipment and unlocking new abilities along the way feels great from a progression standpoint. 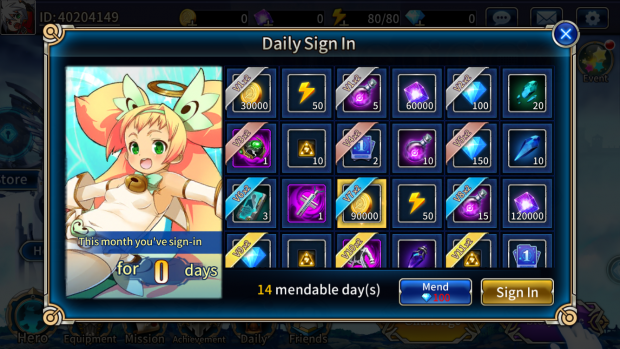 But when I stumbled across the IAP, I felt like I needed an accounting degree to figure it all out. Okay, here goes. Players will have to deal with energy, diamonds, coins, and yet another currency to earn everything they want. Diamonds will run you $1 per 50, roughly, and it costs 50 Diamonds to replenish your energy meter. That’s the first red flag. Then there’s the grinding element where players will need to replay levels to earn more currency to buy better upgrades and items, which is more than enough to put a lot of you off right there.

The real insidiousness lies with the VIP system however. To get in, players will need to spend a certain amount of money to rank up, which unlocks new privileges like more levels, unlimited uses of certain activities, more energy, and a greater earn rate. And here’s the kicker — to unlock specific characters, players will need to be at a certain VIP rank, since you can’t just buy them outright if there’s something you really want. 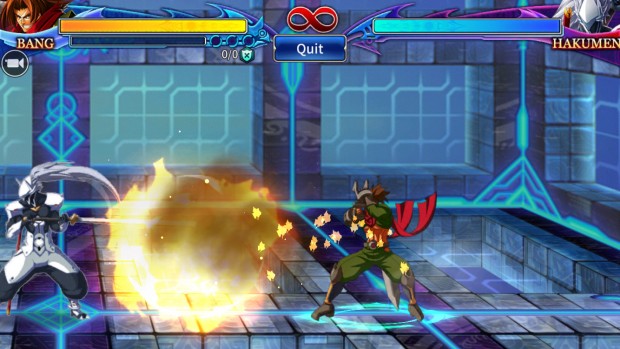 To make matters worse, there’s a daily sign-in bonus that heavily skews towards you registering and linking Facebook (or possibly risk losing data), and the top leaderboards are weighted to the point where most of them spend a lot of cash to constantly keep up. If you play all on your own and can resist the urge to pump real cash into the energy system, and you’re okay with just having half of the cast, you can go a long way with BlazBlue RR. Just be aware of all of the trappings and temptations within.

Despite all of the fluff involved, this might actually serve as a gateway for players to experience the core series. In that sense it does a great job of showing off the beautiful artwork, rocking soundtrack, and diverse cast of characters. If it even brings just one person into the world of BlazBlue, whether it’s by way of consoles or Steam, that’s a win.