The first rally racing game I played was SEGA’s SEGA Rally Championship on the SEGA Saturn. To tell the truth, before that game, I wasn’t a huge racing game fan. I’d play the odd game at the arcades, and I’d certainly join in on a race or two with my friends on their games, but it wasn’t a genre I was terribly interested in. In fact, SEGA Rally wasn’t even my first choice for a game the day I bought it. I had wanted Virtua Fighter 2, but the shop was sold out, so instead I brought home a racing game. I fell in love with that game, and it served as a gateway to the whole sub-genre of rally racing for me. Games like V-Rally, Colin McRae, Rallisport Challenge, and WRC became regular purchases for me, even as I continued to almost entirely ignore every other kind of racer. There’s just something about this type of racing that speaks to me. 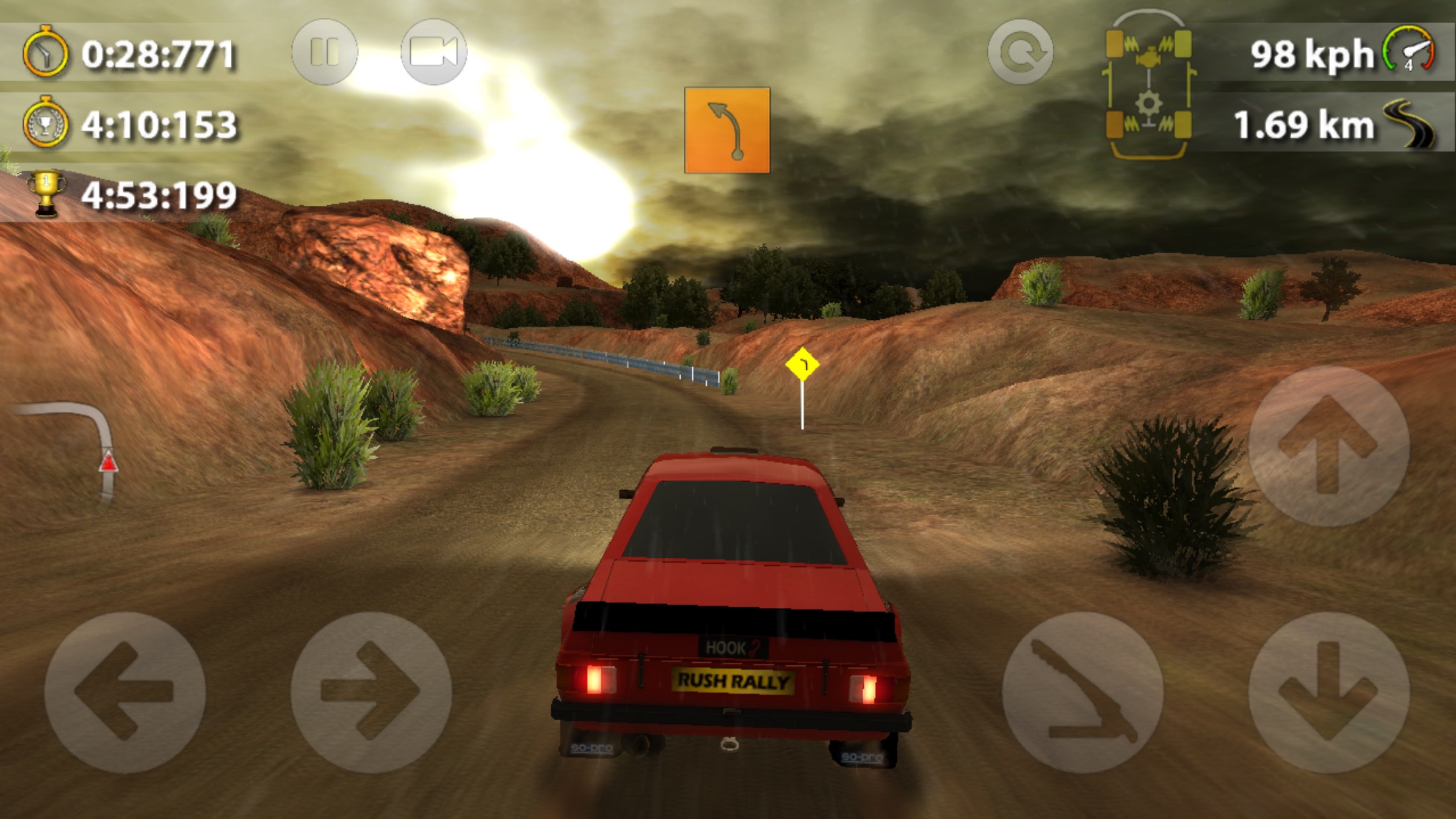 When I started playing heavily on iOS, however, I couldn’t quite find a rally racing game that did everything I wanted one to do. Eventually Colin McRae Rally ($2.99) arrived, and my hopes were high, but while it nailed the physics, the content was severely lacking. It did the job, but I continued to hope something better would arrive someday. That day is finally here. Rush Rally 2 ($1.99) offers great physics, lots of tracks, a variety of play modes, and even some silly extras, all for one up-front price with no IAP. Incredibly, this game was made by a small team of only a few people. Sometimes I can’t believe what we get on iOS for such meager prices, but I’m not going to question it.

I’m going to do something I don’t usually do and start with the negative points. There are no officially-licensed cars in Rush Rally 2. There are reasonable facsimiles, and you’ll certainly be able to spot them if you’re familiar with the famous faces of the sport, but if you’re looking to drive exact replicas of real cars, you’re out of luck. I also am not a big fan of the default button layout for the touch controls. You can change them to your liking, but the defaults were a little awkward for me. The textures on the bottoms of the cars and some of the background objects aren’t the greatest. The app icon isn’t as majestic as it should be. I wish it would say “Game Over, Yeah!" when I lose. I guess I’m reaching now. 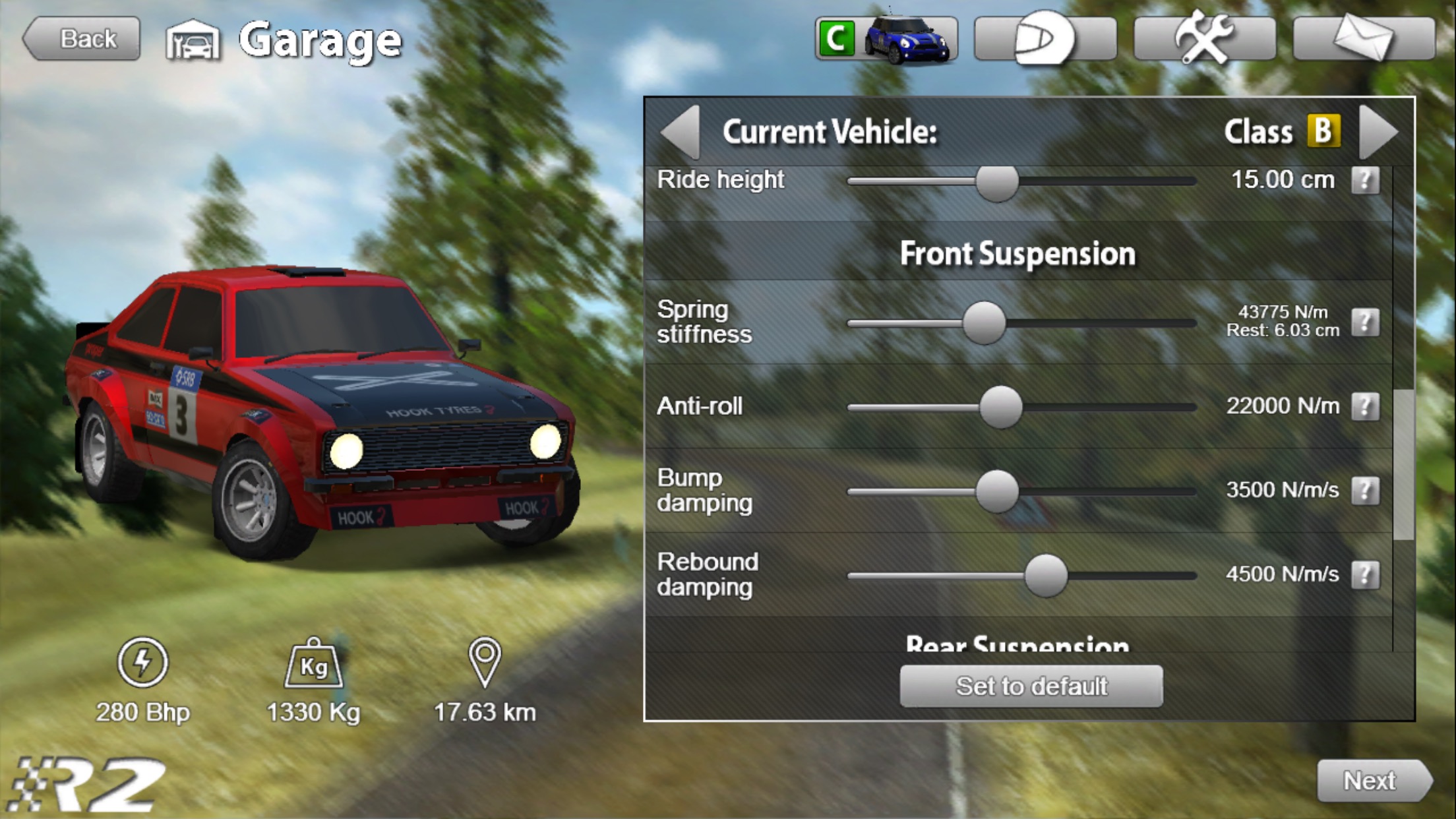 Okay, let’s get to the good stuff. First of all, Rush Rally 2 has it where it counts. The physics on this game are spot-on. The different types of terrain all require different approaches, and the weight and speed of your car are both important factors to take into account while driving. It’s a little arcade-like, to be sure, and things can get a little silly if your car tips over, but the game seems to understand that arcade touches are best used as a flourish and not a foundation. You can tune various aspects of your car before each race, too, an important element that far too many iOS rally games leave by the wayside. Your car will take damage as you race, and if you bang it up too badly, all kinds of things can go wrong. Luckily, you’re allowed to carry out some repairs every two races, but you rarely have enough time to fix it completely. You can choose where you want to focus your repairs, or simply take what the game recommends.

That’s the great line that Rush Rally 2 dances on. If you want to engage with the game on a deeper level, it has a lot to offer you. If you just want to take your car out and go race for a while, it will make the hard choices for you. That’s not to say the game is easy. It’s actually quite difficult if you don’t approach it sensibly. Right from the first championship, if you try to approach this like a usual racing game, you’re going to get hurt badly. Since it’s a rally, there are no other cars on the track, so you don’t have to worry about interference. Take your time around sharp corners and, yes, use the brake. This isn’t Daytona USA. Moving on in the championship mode only requires that you rank in the top three, which is not that hard once you learn how the game works. Getting first place, however, is quite demanding. 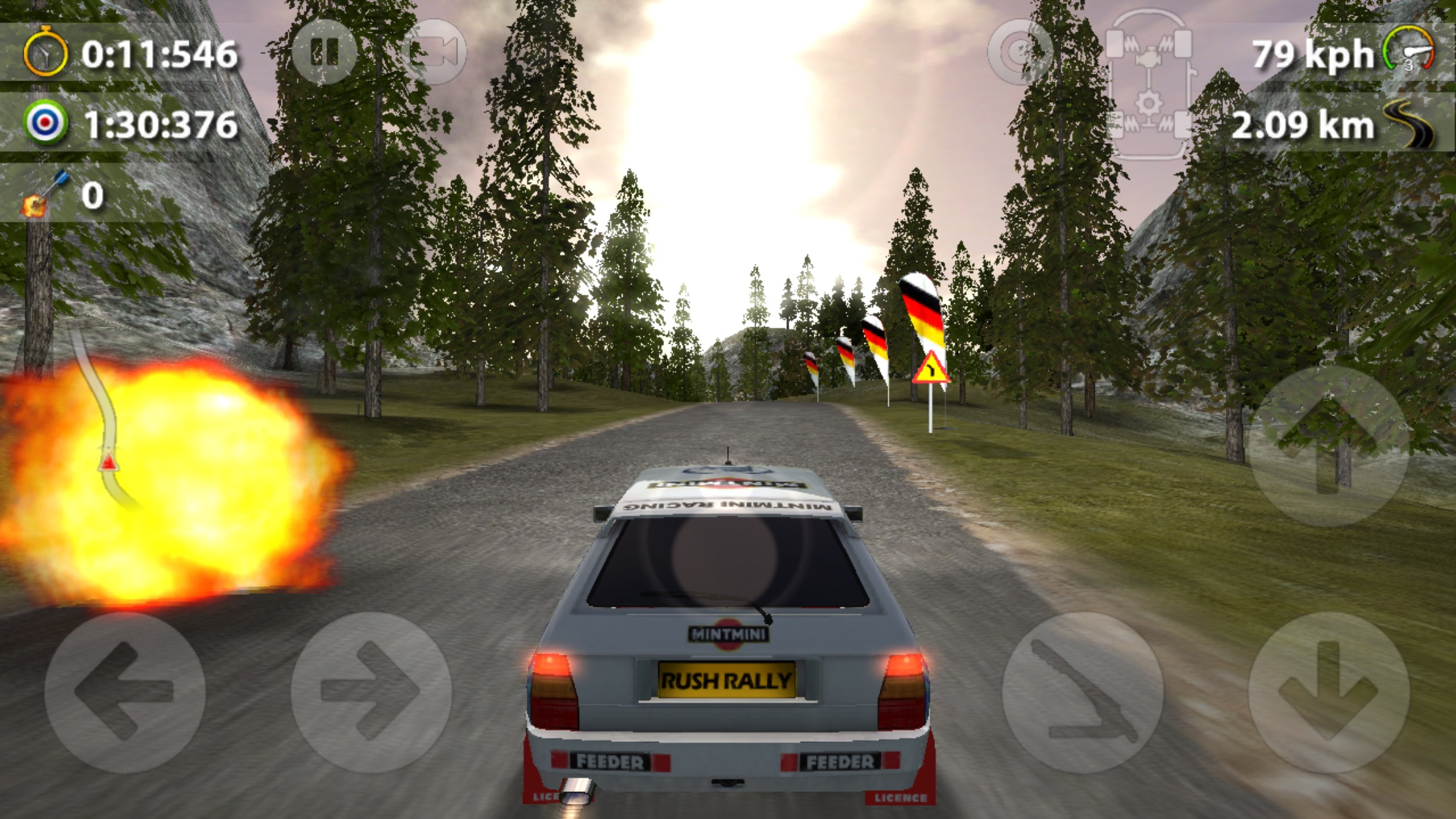 As you rank, you’ll unlock new areas and cars. While you initially start with two cars from the lowest classes, you’ll soon have access to a variety of vehicles. The higher the class you choose, the more difficult your opponents will be, so if you really feel like racing as the Not-Delta even after you’ve unlocked the Not-Evolution, don’t worry, your opponents will match you instead of blowing you away. This all follows standard rally rules, so you’ll be racing on portions of the full track under various conditions, trying to get the best time on each leg. You’ll eventually unlock seven international locations, 72 short tracks, and eight cars, all of which can be played with in the game’s time trial mode. If you’re looking for something else to do, you can also partake of one of the game’s two other modes.

The rally cross mode will likely be of the greatest interest to many players. In this mode, you race on full courses against other cars at the same time. While you’re limited to the cars you’ve unlocked in championship mode, the tracks open independently in this mode as you progress through three different cups. Each cup is made up of several races, so this is actually quite a substantial mode in and of itself. These races are longer than the ones in the other modes, and with other cars on the track, the risk of banging up your ride is a lot more real, so you’ll want to be careful if you want your car to be in working condition by the last lap. 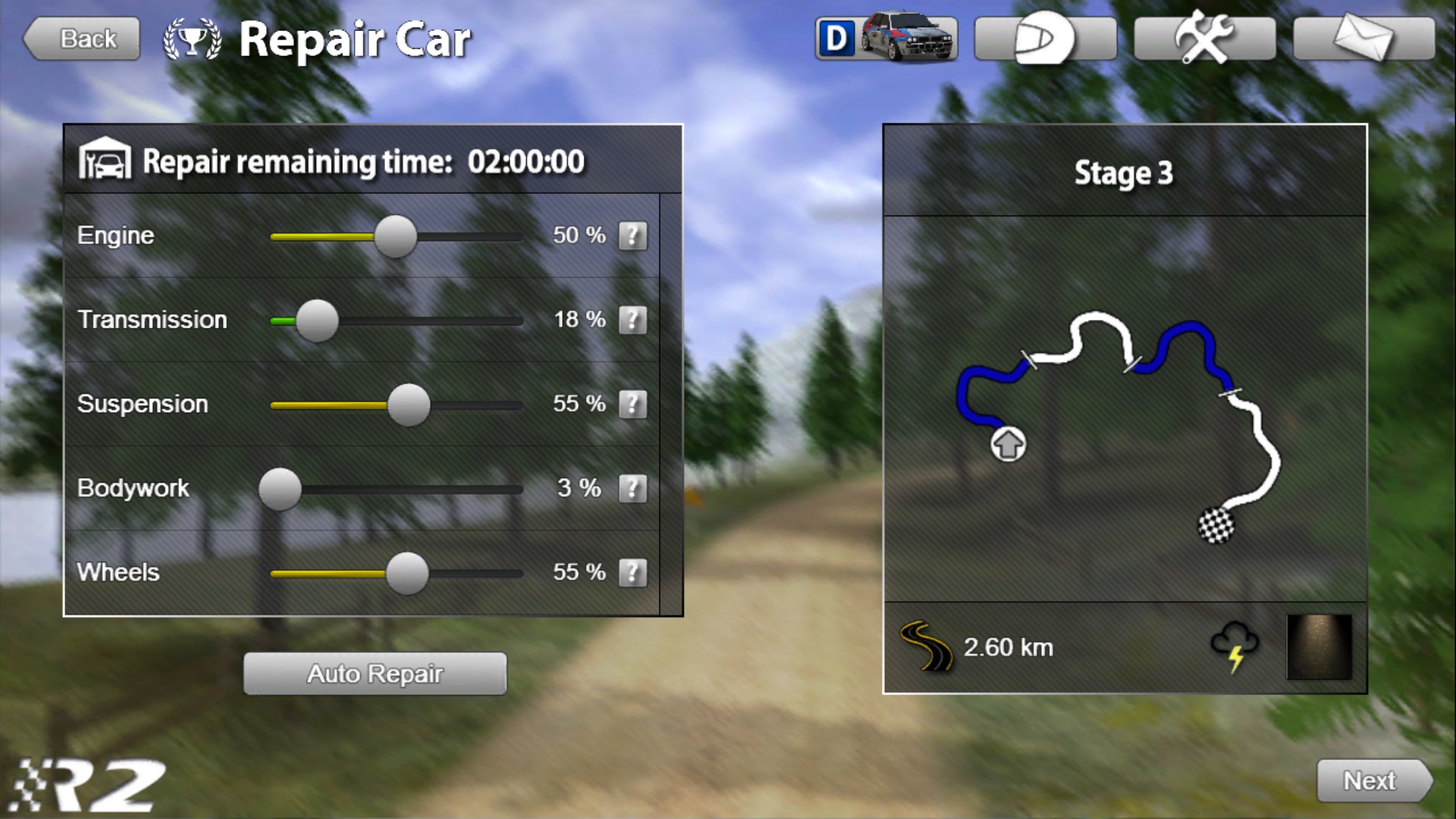 Rounding out the options is the skill games mode. In this mode, you’ll progress through a variety of crazy challenges, like trying to dodge missiles or collect coins. Once again, there are three cups to play here, each made up of several different challenges. It’s a very SEGA-like touch to have thrown into the game, and it’s a great way to cleanse the palate after some intense races in the other modes. Rush Rally 2 could have easily gotten by with just the championship and time trial modes, so getting such properly fleshed-out extras is a real treat.

The developer also did a great job of filling out the options. You can use touch controls with virtual buttons arranged as you like them, tilt controls for steering if that’s your thing, or an MFi controller if you want that classic feel. You can tweak the various graphic effects, use a selection of assists, set the volume of music, sound effects, and the co-driver, turn ghosts on and off, switch between metric and imperial measures, and more. The game keeps track of tons of statistics, some of which are really just there for fun, such as how many donuts you’ve done in your career. There are in-game achievements to unlock, too. Thanks to the graphical settings, it’s easy to get the game running at 60 FPS even if your hardware is a little old, too. The game will try to auto-detect which settings will produce the best frame rate, but you can always override it if you want things to be prettier at the cost of smoothness.

Simply put, Rush Rally 2 is now the rally racing game to beat on iOS, and I believe it stands firmly among the very best the wider racing genre has to offer on the platform. That it came from a small team, that it has no IAP, and that it succeeds in both providing a quality racing experience and offering up a lot of content help it stand out even further. With so many racing games taking the free-to-play route these days, it’s nice to have one where I don’t have to question if my progress comes down to my own skill or lack thereof. If you’ve been waiting for a genuinely great rally racer for your mobile device, well, here you go.