Hello, gentle readers, and welcome to the RPG Reload, the weekly feature where we regularly engage in medieval dumpster diving. Each week, we take a look at an RPG from the murky mists of the App Store’s past to see how it stands in the judgmental light of the modern day. It’s equal parts reflection, reminiscing, and diving deeper than our reviews usually allow for. As the wielder of the sacred nail clippers, I try to choose a balanced plate of games from week to week, but if you feel like I’m missing something essential, please let me know. You can comment below, post in the Official RPG Reload Club thread, or tweet me at @RPGReload. You might not see it soon, but I’ll add your suggestion to the master list, a prestigious prize if there ever was one. 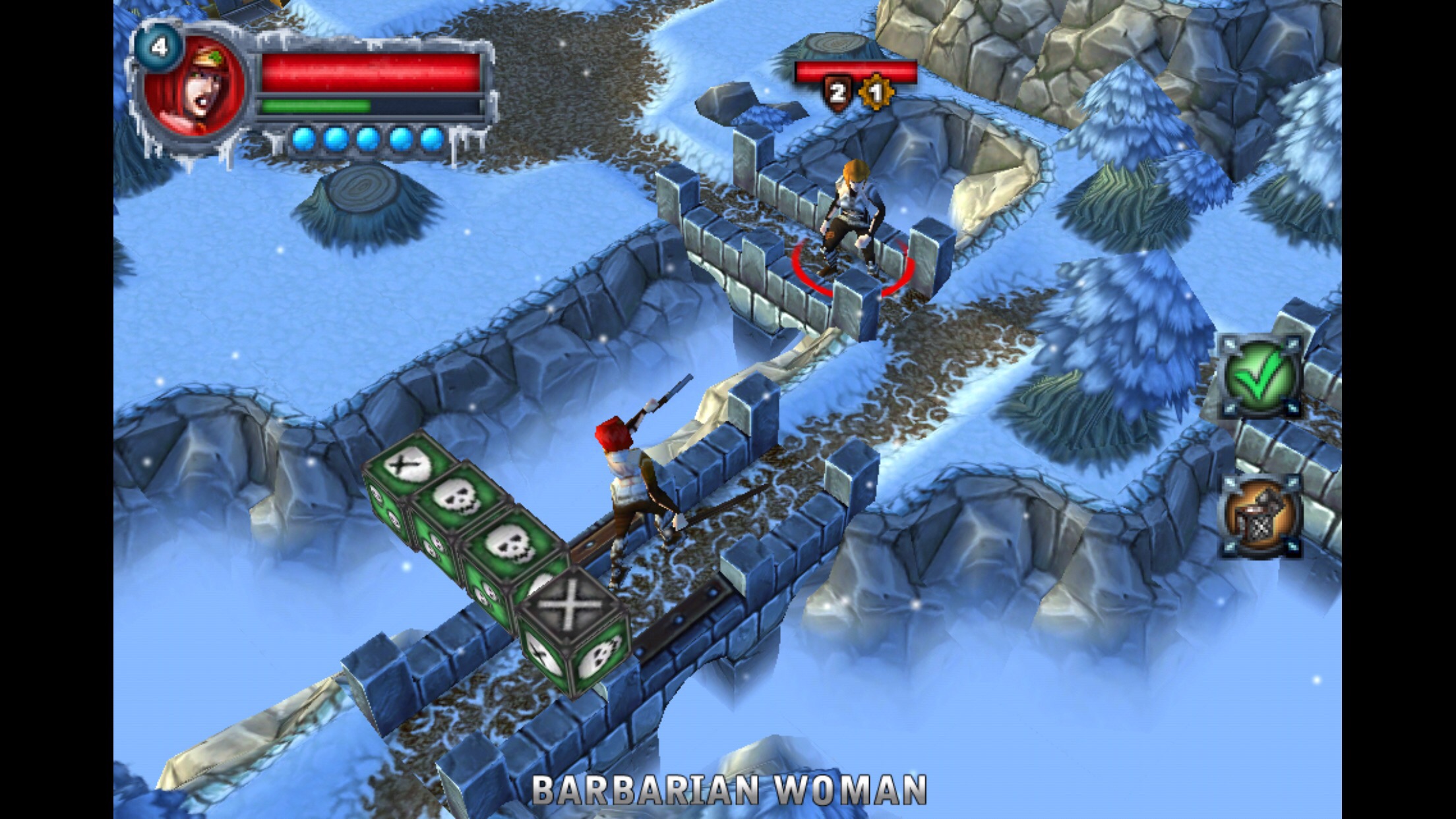 We’ve been covering a lot of Crescent Moon-published RPGs in the Reload over the last year or so, but there’s a good reason for that. Particularly in the early years of the iPhone, the publisher was among the most prolific purveyors of iOS-original RPGs. Aralon: Sword and Shadow (Free) and Ravensword: Shadowlands ($6.99) are still considered among the best in the library of App Store original RPGs. Competition got stiffer over the years, but in those early days, if you loved RPGs, you probably had a few Crescent Moon games on your device. While the publisher developed or co-developed some of those games, there were many other titles where they mostly served in the role of a publisher. One such title from their early line-up is Rimelands: Hammer of Thor ($4.99), developed by Dicework Games.

Released in September 2010, Rimelands ended up coming out between the first Ravensword game and Aralon: Sword and Shadow. Compared to those two games, Rimelands looked like something quite different. Instead of exploring a 3D open world from a behind-the-back view, you were exploring dungeons step-by-step from an isometric angle. You can choose where you wanted your skills to develop, but apart from that, Rimelands is a fairly linear affair. There’s no mistaking Ravensword and Aralon as streamlined children of contemporary PC RPGs like Elder Scrolls, but Rimelands seems to be more in tune with the pen, paper, and dice origins of the genre. I mean, it’s right there in the developer’s name. 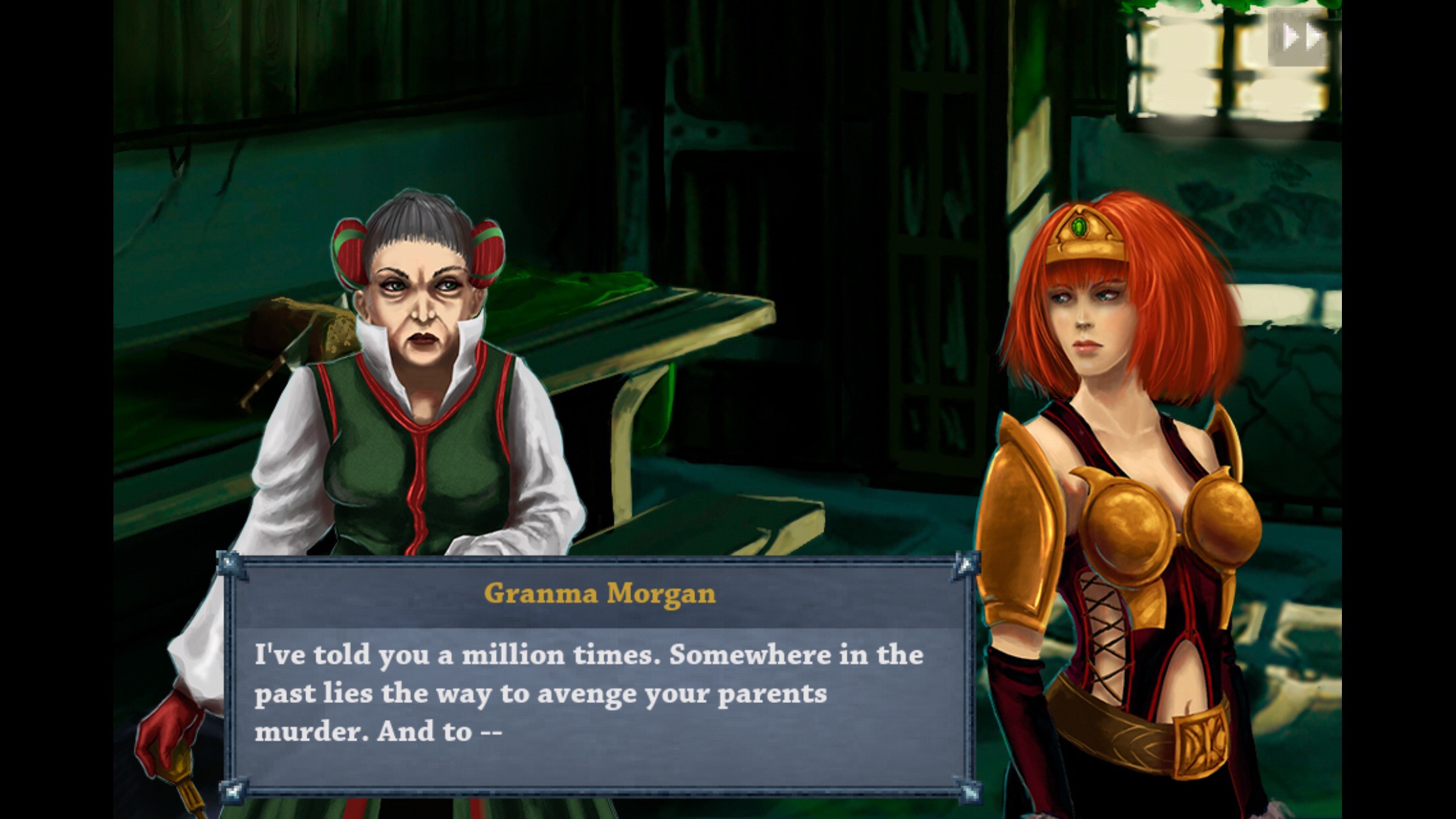 Dicework Games was a Finland-based developer who seems to have been absorbed into Kyy Games at some point. I’m not sure which games these days come from the Rimelands team, but at the very least, we know that Trouserheart ($2.99) and Trulon: The Shadow Engine ($4.99) are their work. Trouserheart is a disappointingly straight-forward action game, but Trulon definitely has some Rimelands DNA in it. That’s important, because Rimelands DNA is about the best we can hope for. The game did okay, but sold lower than expectations, putting the kibosh on planned expansions and sequels. Admittedly, Rimelands is a pretty niche game, but it’s sad that it couldn’t find a bigger audience, because it really is quite excellent.

You play as Rose Cristo, a treasure hunter who scavenges abandoned vaults looking for artifacts at the request of her grandmother. The world of Rimelands is a post-apocalyptic one, but it’s not one of those depressing brown ones. Enough time has passed for nature to reclaim things, giving this game more of a lush fantasy vibe. The story set-up is good for explaining why you might come across anachronistic things in the vaults, if nothing else. Initially, it seems like the game will lean heavily into its storyline, but it actually goes limp pretty fast. A bit of a squandered opportunity, but it’s hardly the first RPG that has to get by on its gameplay. 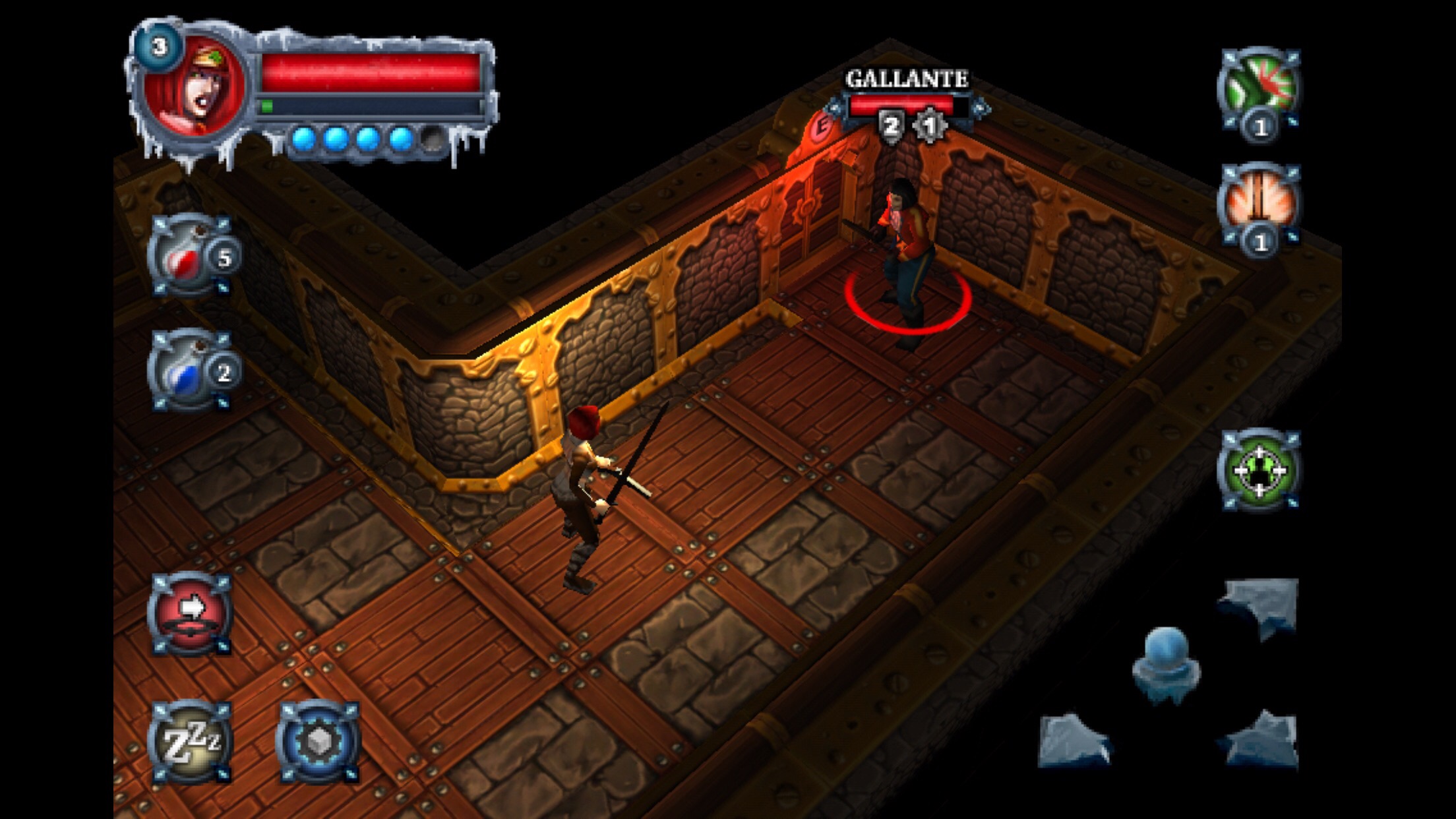 Fortunately, things fare a lot better in that regard. You travel through discrete areas, exploring vaults in a turn-based RPG. You can move in any of four directions, holding down a direction to move quickly if you like. Should you stumble across an enemy, things will slow down a bit. For every turn you take, the enemy will get to make a move. You can use melee, ranged, or magic attacks to take down the enemies, depending on what kind of equipment you’re using. The mechanics work a lot like the classic board game HeroQuest, where each side rolls dice to determine attack and defense. Better equipment and stats will afford you more dice, increasing your chances to hit or block. You can quaff potions without spending a turn, and that’s going to be a vital part of the strategy for any non-mage build.

Although the game is most decidedly not a roguelike, it does borrow a few elements from that genre. Mostly the ones that Diablo borrowed and popularized, mind you. Loot, both dropped from enemies and in chests, is semi-randomized. Some of the vaults are randomized, as well. Rimelands is quite tricky in that way, because many of the sections are hand-crafted, but the randomization works well enough that it’s hard to tell which are which. What that means is that each playthrough will have a few different things, making it pretty fun to replay, at least on paper. It’s also a relatively short game, running for about seven or eight hours. Replaying longer RPGs is enjoyable and certainly part of my gaming habits, but it’s a lot easier to fit in an extra play of something that’s 10 hours long versus something that’s 40 hours long. 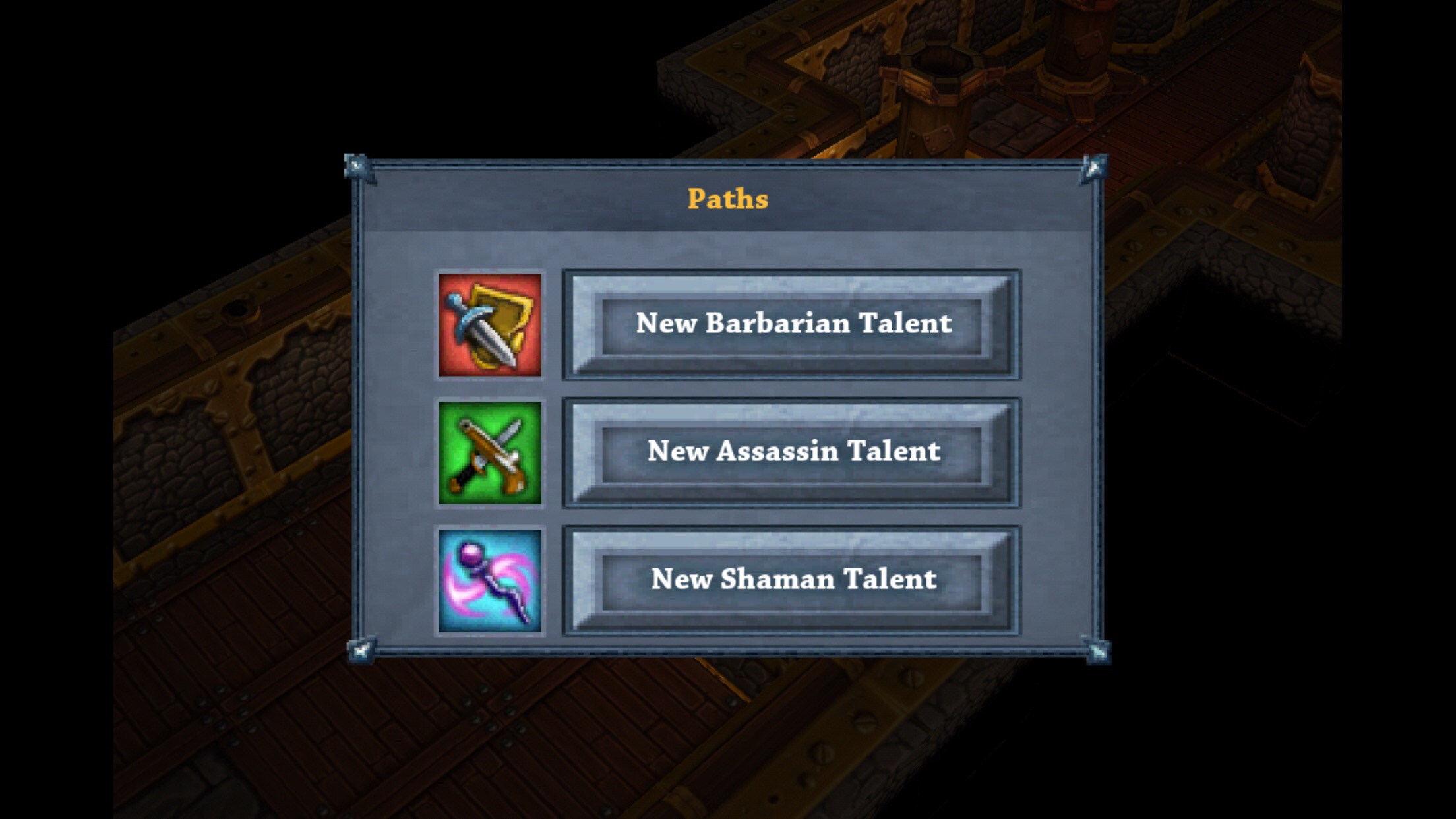 In addition to the solid loot system, there’s also a slightly creakier crafting system. You can break down extra items you find to get parts. You can then use those parts with any blueprints you find to make new equipment. You’ll have to do this in the very first vault you explore, and it’s generally worth building things from any new blueprints you stumble on. There are sub-quests to solve as well, though the way the game handles quests in general could be better. Basically, once you’ve cleared a vault of enemies, it’s cleared, and you can’t go back there again. Generally, this is fine. If you’ve killed all the enemies, you probably also knocked down any extra quests associated with the location. But on rare occasions, you can clear a location without doing everything there is to do in it, leaving you with a hanging quest forever after. My eye is twitching just thinking of it.

The main challenge in Rimelands is in managing crowds of enemies. Unless you really mess up your skill point allocation, you should be strong enough to handle most monsters one-on-one. Even if you have a bad run of luck, a couple of potions should set you straight. But after you get a little ways into the game, you’ll almost never be going one-on-one with enemies. Groups of enemies are extremely dangerous, and if you don’t adapt your tactics for crowd control, you’re going to see the Game Over screen frequently. It’s this aspect that keeps the game from going stale over the course of its run, I feel. You have to be aware of your environment and how you can use it to your advantage. Your skills are also extremely important in Rimelands. Simply hacking or shooting away at what’s in front of you won’t take you very far. 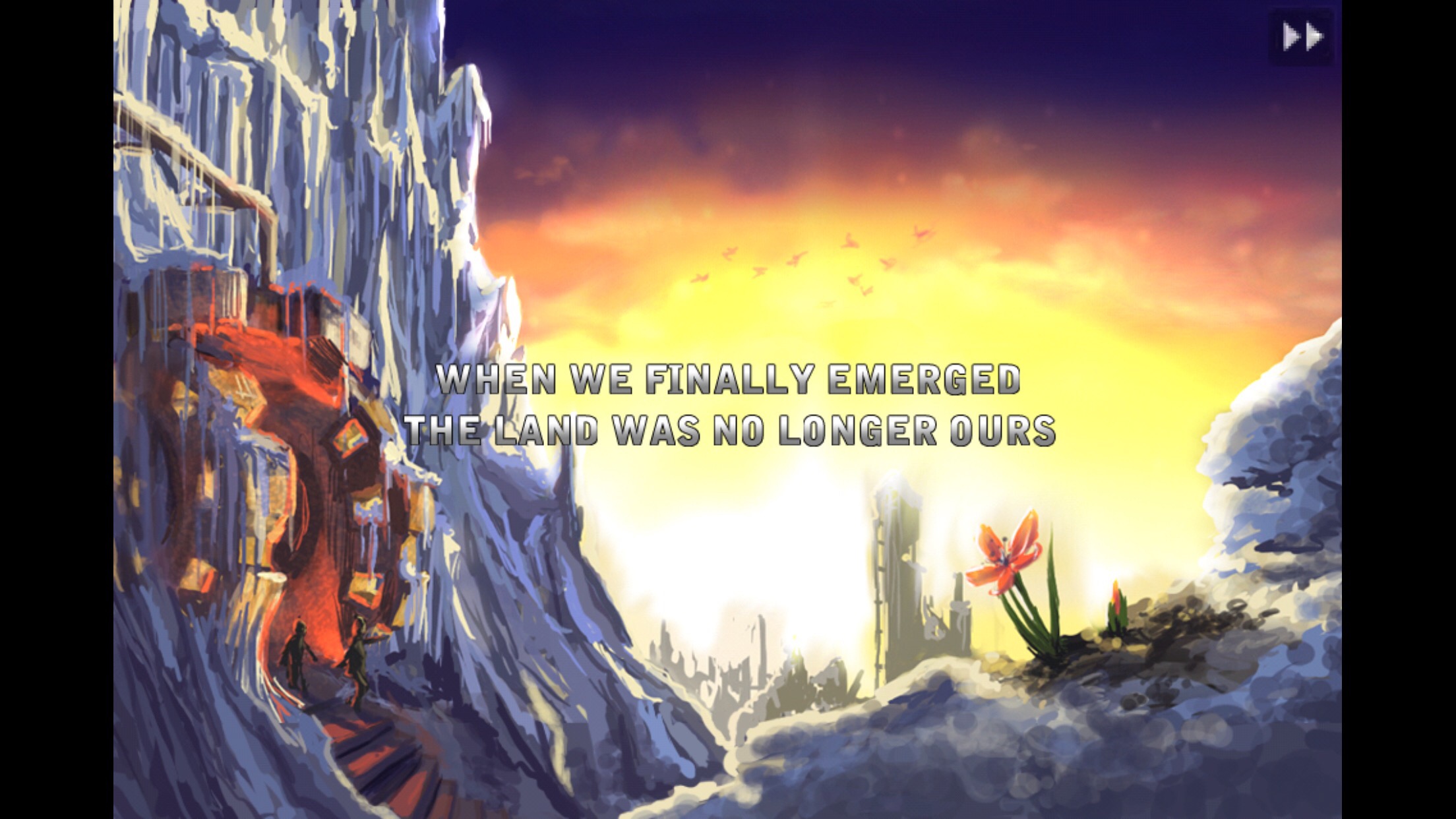 One strategy the game’s set up doesn’t allow for is grinding. Since enemies don’t respawn, there’s only so much experience and cash you can gather up during the game. Particularly early on, your experience level should be the same as any other person’s who is at the same place in the story as you. Regular readers know that I’m of two minds when it comes to games that try to curb grinding. On the one hand, I think grinding is a go-to crutch that many players often rely on before they even try to engage with an RPG’s mechanics, leading to a worse experience and a dimmer view of the game. On the other hand, grinding is one of the things that makes the RPG genre accessible to a wide range of players. Not everyone’s talents lie in strategy, but they might enjoy playing through the story anyway. Grinding gives those players a means of progressing. Depending on where you distribute your points, Rimelands can be surprisingly tricky in places, and I could definitely see some players giving up on it.

For a game that hasn’t been updated in more than five years, Rimelands holds up surprisingly well all-around. There’s still nothing with quite the same mechanics on the App Store, so even though it’s very old by iOS standards, the gameplay maintains a fresh feeling. There are certainly signs of its age, of course. The visuals suffer somewhat due to being designed for 2010 hardware. While one of the updates squeaked retina and iPad support into the game, it’s designed around the smaller screen sizes of the time. Obviously, there isn’t any support for iCloud or MFi controllers, which is a shame as the latter in particular would be most welcome. While Rimelands was a well-polished game in its time and place, it feels a little low-rent in spots today, particularly with regards to the story. I’m also not a fan of the save system, which dumps you back at the beginning of the vault floor when you die or reload. It’s very inconvenient if you’re playing on the go and need to stop at a moment’s notice. 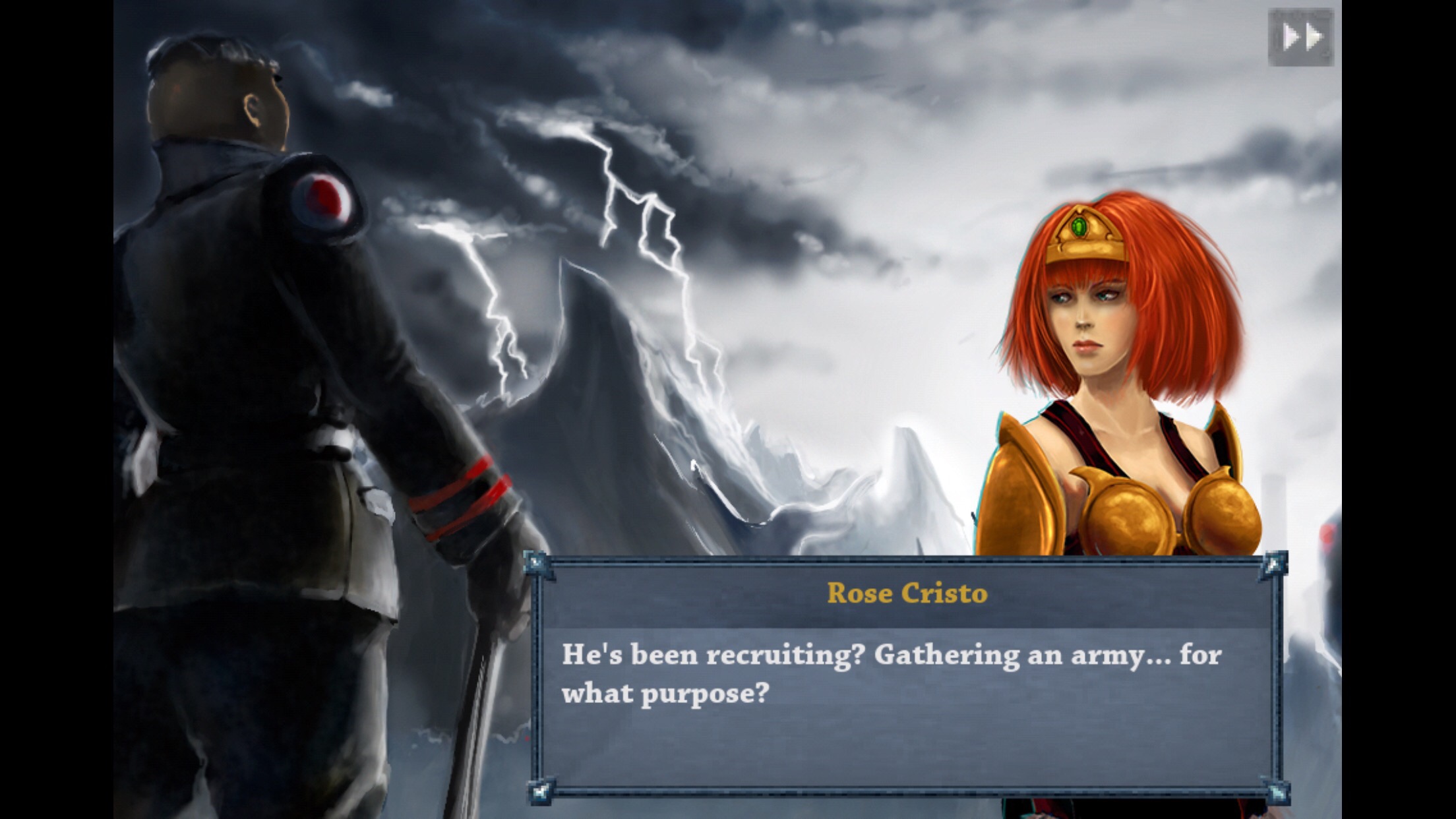 That all being said, Rimelands: Hammer of Thor is very much worth playing in 2016. It’s fun, challenging, and has a feel all of its own. It’s simple enough for short sessions, but its battle system is satisfyingly complex. A lot of games of this vintage feel old by modern mobile standards, and not just for technical reasons. I suspect that with a few tweaks and some spruced-up visuals, Rimelands could come out today and receive a level of acclaim similar to the one it received in 2010. If you’ve never played it before, give it a go. I think you’ll be pleasantly surprised. I’m not sure I would want to replay it back-to-back or anything, but now that some time has passed, I really enjoyed coming back to it. It’s a shame there are no plans for a sequel, but I guess that’s how it goes sometimes.

That’s just my take on Rimelands: Hammer of Thor, though. What do you all think? I want to know, so please leave your comments below, post in the Official RPG Reload Club thread in the forums, or tweet me at @RPGReload. I’d also like to remind everyone that we’ll be recording this month’s episode of the RPG Reload Podcast soon, and we would love to get some reader mail. Send questions, comments, or fresh comedy to [email protected] and we will do our best to reply on the show. As for me, I’ll be back next week with another RPG. Thanks for reading!