It’s a fantastic year to be a Pokemon fan. As well as it being the 20th anniversary of the series, the seventh generation of the mainline titles Pokemon Sun and Moon are set to hit 3DS at the end of the year and even more groundbreaking is that the very first Pokemon and even Nintendo mobile game Pokemon GO is also going to launch on iPhone. Today, during Nintendo’s E3 Day 2 Live Stream featuring gaming visionary Shigeru Miyamoto, Game Freak director Junichi Masuda and also an array of YouTube celebrities, we learnt that the end to the long wait for the game was in sight, as the physical accessory ‘Pokemon GO Plus’ is to launch by ‘late July’ for a retail price of $34.99, and therefore the app will hit on App Store some time before then. While no specific due date was stated and no further details on international release details, it certainly seems that we’ll be catching collectible critters on the go sooner rather than later.

Further details for Pokemon GO and the accessory were also revealed during the Q&A session between field testers and the developers of the game. For hardcore fans of the original, Nintendo and Niantic have assured us that numerous key mechanics remain the same and will be instantly familiar to long term Pokemon trainers. For example, grass type Pokemon will be caught in grassy areas, and water type Pokemon in ports and bays near the sea. Rarer Pokemon will also be equally difficult to catch, with the specific example of Abra cited and, in similar infuriating fashion to the core series, will teleport away if you fail to catch it immediately. There are some newer ideas too – evolution is altered, with Niantic focusing on catching of Pokemon rather than battling and so candies are obtained through catching multiples of a Pokemon and, for example, Squirtle will evolve into Wartortle when 25 Squirtle candies have been obtained. This alteration, and the reasoning behind there being no trading immediately accessible within the app, is that Niantic want the player to focus on going out and catching as many Pokemon as possible, rather than standing still and battling and trading. However, they have assured us that such features will be added at a later date after the game has launched. 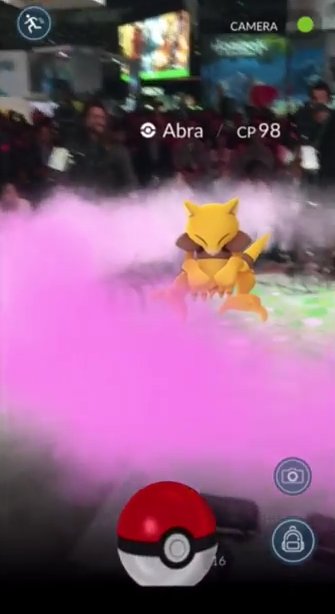 The ‘Pokemon GO Plus’ accessory was also analysed in more detail, with it being explained as a way to be able to catch Pokemon on the go without looking at the phone screen all the time and by solely utilising the device. The ‘Pokemon Go Plus’ will vibrate when a Pokemon is nearby or a Pokemon has been caught, and the light on the gadget will flash green when a wild monster is in your vicinity, rainbow if the capture attempt was successful and red if you were unable to do so. This will connect to your phone via Bluetooth, and will launch in ‘late July’ for $34.99, with the ability within the app to locate local stores that stock the accessory. While the impressions from the stream made Pokemon GO seem rather rough around the edges and even crashed during the demonstration, the way Nintendo and Niantic are constantly updating the app with bug fixes, content such as potential Pokemon Sun and Moon connectivity and even more Pokemon to expand on the initial Generation 1 limit ensure that anyone wanting to catch ’em all will not be disappointed next month.

(credit to Juxlos for screenshots from the live stream)