It’s been an odd year for ChoiceScript interactive fiction games. In the first half of this year, I’ve reviewed two games related to mermaids, and one game related to pirates. Well, we must be at the end of this particular phase, because Choice Of The Pirate ($3.99) has both mermaids and pirates. Truly, we’ve nowhere left to go. Similar to previous pirate gamebook Scarlet Sails (Free), you play as a plucky member of a pirate crew who finally gets their chance to achieve glory. The tone is a little different here, however, with more of a fantasy Pirates of the Caribbean feel to the adventure. It’s also a good bit longer than Scarlet Sails, making for a better pace and overall more enjoyable game. To be sure, it’s popcorn, but there’s nothing wrong with that now and then.

The game throws you right into the action right away, having you participate in a ship versus ship battle between two famous pirate captains. You’re serving as a crew member for one of them, though you have bigger dreams that you’re soon put in a position to realize. This opening battle allows you to define your character’s basic template, including your name, gender, and skills. Soon after, you’ll be able to select your sexual orientation, though the romance aspect of this game is less emphasized than in many other titles from publisher Choice of Games. Once that’s settled, a quick side adventure puts you in the position of being able to acquire your own ship and crew. 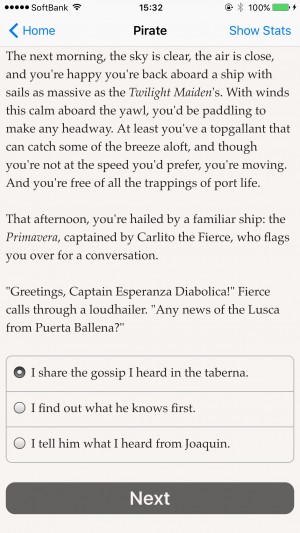 Times are turbulent in the Lucayan Sea. The Crown has started to crack down on pirates, the mysterious Pirate King is apparently fighting back, pirates are hunting their fellow pirates to try to curry favor with the Crown, and there are even tales of ghost ships and sea monsters. In the middle of all of this, you’ll have to decide where you want to stand in the history books. Are you going to stand with the Pirate King, turn against your peers and spy for the Crown, or tell both of them to take a hike and create your own legend? Once you settle that decision, you’ll also have to decide what kind of pirate you want to be. You can be a ruthless, evil terror who inspires fear, a swashbuckling rogue that commands everyone’s adoration, a sneaky backstabber who can never be trusted, and so on. There’s a fair bit of room to play as the kind of pirate you want to be.

Your choices affect your reputation, but as usual, you’ll also need to mind your statistics. Certain choices will improve your skills, and there are certain plans you’ll only be able to pull off if you’ve got a high enough level in the associated talents. If you lean hard into your negotiation skills, don’t expect to be able to navigate your way through a tropical storm. Your relationships with other characters work similarly. You won’t be able to just jump into a romantic relationship with certain people, and getting information or cooperation will require you to handle things delicately sometimes. It’s all fairly standard stuff for games using the ChoiceScript engine, but Choice of the Pirate seems quite happy to ride in that groove. 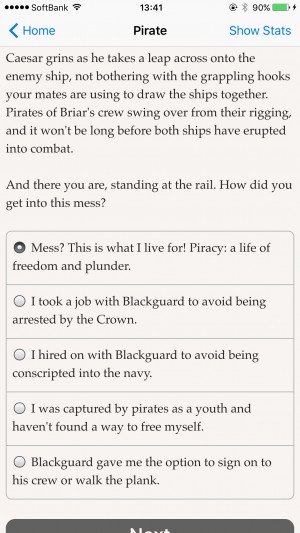 That extends to the story, as well. Written by Alana Joli Abbott, the plot is fun and pulpy in mostly good ways. There aren’t any shocking twists or meditations on the nature of humanity. It doesn’t get more sophisticated than a moderately easy-to-predict mystery about the Pirate King’s identity. While the setting certainly echoes real history with some pretty obvious stand-ins, there’s a thick streak of magical fantasy painted across the canvass. Don’t worry too much about it, the game seems to urge. There are giant monster octopi to kill and curses to lift, after all. Don’t you want to find the legendary treasure? The characters aren’t particularly deep, but they do distinguish themselves well enough for what the plot requires.

Choice of the Pirate feels totally comfortable in its swashbuckling skin, and a lot of that is owed to Abbott’s smooth writing. Things get a little creaky during some of the battle scenes, with two of the bigger set pieces wrapping up way more quickly than I had hoped. For the most part, however, the story moves along at a good pace, throwing a variety of situations at the player that keep things fresh and help add to the setting. It’s quite possible to come to a bad ending early if you aren’t careful, so there is some challenge involved in reaching one of the game’s proper endings. Even the bad endings have a fun little extra you can take advantage of, though. There are lots of ways you can make your mark in the history books, and sniffing them all out is a good time.

Choice of the Pirate isn’t a must-have gamebook, but it wears its concept well and has an enjoyable time along the way. As such, fans of fantasy pirate stories and those who enjoy lighthearted adventures will likely get their kicks out of this story. Its zippy pace, variety of scenarios, and multiple endings make it worth playing multiple times, and the light tone and overall solid writing quality ensure that it’s a pleasure to do so. While it’s certainly the case that innovation is important, there’s a lot of value in familiar things done well, too. That’s exactly what Choice of the Pirate offers, no more, no less.