Beat ’em ups started out with a simple enough premise. Punch stuff, get points. It’s that easy! In an era where quarters equated to extra lives, and arcade owners could jack up the difficulty with the flip of a switch before the doors opened, it was a lucrative business. But once they hit home consoles things changed. Players could just opt for infinite lives, which, while great for your wallet, takes away some of the inherent nervousness of using up your very last quarter in X-Men while Magneto is flashing with a critical amount of life. It was a rush to be sure, and although Rockabilly Beatdown ($0.99) captures some of that magic, it lacks staying power.

What’s the gist? Well it’s not quite a level-based arcade system — it’s an “endless brawler," with infinite scrolling stages that can be explored in both directions on a 2D plane. Yep, no progression here — you pick a character, and it plops you into a random stage. One of the best parts is the beautiful pixel art, which really helps every single character model pop, and works well in tandem with the similarly popping soundtrack and old school sound effects. While it only has one method of attack (punch) and one core button, the strategic depth kind of makes itself apparent over time. For starters, enemies either take one or multiple punches to defeat, so you really have to acclimate yourself to what different types of foes throw at you. 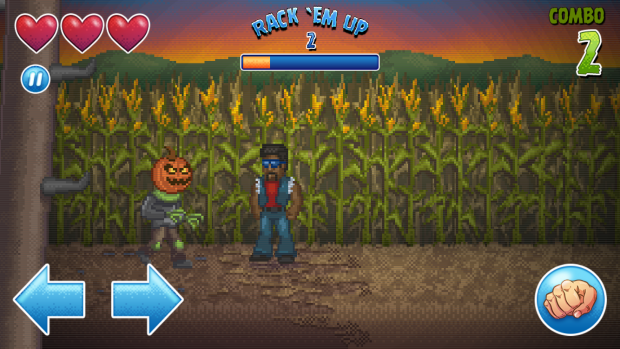 One level features a giant tractor and crows that attack with a specific flight arc for example, forcing you to pick your battles and decide which side to tackle first. It’s actually pretty fun figuring out where to go next, especially when the avalanche of baddies flows onto the screen. At some points it feels hopeless, but after an hour or so I picked up on different ways to approach those situations and ended up coming out on top. Plus, after building up a certain amount of punches and filling a meter you can opt for a super attack (which appears as a second button to press) that flies across the screen for some breathing room, but then it’s quickly back to business.

This cycle repeats itself after switching to a new level (like an arctic setting that has evil snowmen), which is a really cool feeling that eschews a static design of so many other endless type games. With six levels to keep track of, things can get a little hectic, though it’s not all crazy all the time since all three characters all basically operate the same.  On the flipside, aimlessly roaming around a giant sidescrolling screen is basically it. There’s no real goals to achieve, no levels to raise up, and no endgame.

Yes, IAP is your only salvation after spending $0.99 on the game. Sure you’re basically feature-complete after spending your cash, but not content complete. There’s a set of costumes for an additional $0.99 that amount to cosmetic upgrades, and a new hero, level (that’s “Lumber" themed), and enemy type for another $0.99. It’s not the end of the world nor does it feel predatory, but it would have been nice if there were more costumes to buy with an in-game currency of sorts, and the actual content was unlockable. 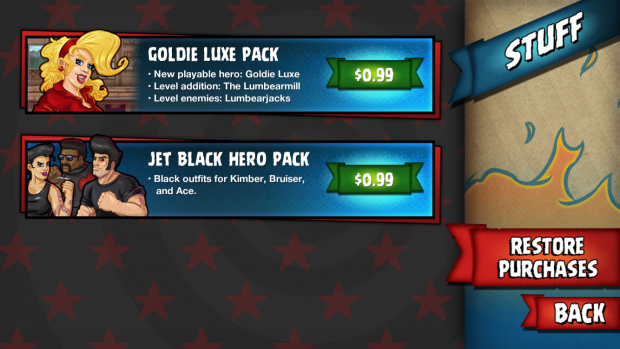 I get what the team is going for, and it’s nice to see that a convoluted gold currency system that is tied to IAP isn’t present (I can easily see where power-ups for cash could have been inserted to goad players into using them at opportune moments, or strategically place a “would you like to continue for [x] amount of crystals" mechanic to that very same end), but after several hours of playing, I wish I had something to show for my efforts outside of a high score. Updates are promised, but getting some progression system in first is paramount. Even if it was something menial like weapons it would go a long way.

Having said all that, Rockabilly Beatdown is a good mindless beat ’em up that actually has a decent amount of strategy involved. The pixel art is top-notch, the character designs are memorable (even the canon-fodder enemies), and I’m really looking forward to Rumblecade’s next project.