Paradox Interactive is mostly known for its complex strategy games covering wars and situations both real and imagined. Its most famous series in that vein is probably Europa Universalis, but Paradox shepherds several successful strategy brands, including both internally developed titles and games where they act only as a publisher. Their latest iOS release brings one of their more popular strategy brands to the platform, but in a very different form. Hearts of Iron: War Stories (Free) is a spin-off of the World War 2 strategy series Hearts of Iron, which originated on Windows PCs in 2002 and just saw its most recent release a few days ago. Instead of the familiar tactical gameplay fans know and love, War Stories is a gamebook. You’re no grand commander, but rather a young recruit to the British RAF. If nothing else, it’s a change of pace for Paradox, and it shows.

You see, there are a lot of little pieces that go into a game of any genre, and gamebooks are no different. Without going into too much detail, I’d say the most important elements of a gamebook are the overall quality of the writing, the variety of choices, player agency, and the difficulty in finding a successful path. Ideally, a gamebook is well-written, makes the player feel like they have significant control over the ultimate outcome, presents choices that make the player think, and gives the player all the hints and tools they need to make a successful run if they’re observant enough. It’s a tricky thing to nail down, because the limitations of the format mean you’re really trying to successfully peddle an illusion. There’s a real art to it, and even the best of the bunch stumble with remarkable frequency. 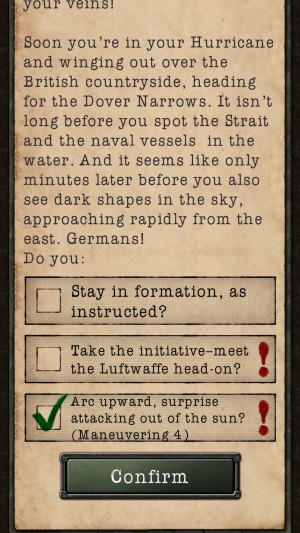 Hearts of Iron: War Stories is certainly written well enough. There are typos here and there, but apart from that, the text is compelling. As you might expect from a game published by Paradox, the game is full of factual information about the war, the equipment used, and the conditions of the RAF during that period. There’s an infectious adoration that shines through in the way War Stories describes all of these things. Of course, such love for details presents a high risk of turning into a dull encyclopedia of war memorabilia, but the author, Aaron Rosenberg, crafts an enjoyable tale to tie everything together. It’s more than a little on the generic side in terms of the details of the plot, but there’s only so much you can do when you’re trying to keep to the reality of historical events, I think. The pace is brisk, perhaps too brisk, and while a few characters stand out, many of them start to bleed together over the course of the story. Few of them have voices of their own, but since the story is told from your character’s point of view, it’s not as big of a problem as it might seem.

I’ve also got to hand it to War Stories as far as fairness goes. The path to the ending is usually quite clear. There are more than a dozen different ends to the game, largely depending on how well you’ve built up your stats and relationships, but it’s fairly obvious which outcomes will result from which choices. Unless you’re intentionally being extremely reckless, you’re sure to find your way to one happy ending or another before too long. That’s likely a point in the game’s favor for anyone who tends to find games in this genre to be too strict, unfair, or downright frustrating. Unfortunately, it’s also tied in with some of the game’s major issues.

There’s no intrigue to the choices in War Stories at all. The right answers are always obvious, and the simple fact that there are right answers so often is an issue in and of itself. There were two or three points in the story where I actually had to take a second and think about what to choose, and that’s not nearly enough to make for an enjoyable game. If you don’t know your World War 2 history well, you could probably add another couple of choices to that total, but in a game that entirely pivots around making choices, having everything be too obvious is a significant drawback. You can be the good boy who always follows orders, or the daring risk-taking maverick, and there isn’t any good reason that you shouldn’t just lean hard in one direction or the other. The subject matter lends itself well to difficult choices, but War Stories is content to present things in a very black and white way. 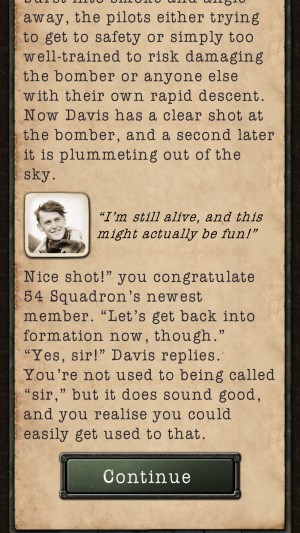 The ending is the worst part, though. After working your way through 22 short chapters, the game gives you a big list of all the endings, with the ones you fail to qualify for grayed out. Simply choose the ending you like best and enjoy the closing page of text. It deals a heavy blow to any immersion the game had built up to that point, and there’s little satisfaction in such a close. Part of the fun of these kinds of games is seeing which rail your choices end up putting you on, but War Stories isn’t willing to carry that ball for you. What’s the point in even playing again and making different choices, outside of chasing down the one or two endings on the list that you didn’t qualify for the first time? Perhaps if the endings themselves were more interesting, there might be some motivation, but like the overall game itself, they’re all very short and don’t make much of an impression.

It’s a shame I didn’t care much for the game itself, because the production values are quite nice for this genre. The text appears like words on a clipboard, there are plenty of photographs to illustrate things, and the music and sound effects add greatly to the atmosphere. Just hearing the sound of the guns firing during the aerial battles made them much more exciting than they would have been without that little detail. It makes me feel like War Stories is more aimed at fans of the period than fans of gamebooks in general, which could certainly account for its lower difficulty. At least the first taste is free. The initial free download gives you four chapters that take the story up to your character becoming a member of the 54th squadron. The remaining chapters can be unlocked with a single $4.99 IAP.

The writing in Hearts of Iron: War Stories was interesting enough to hold my attention for its brief running time, but the dull choices and disappointing ending system make it pretty hard to recommend. It’s a mediocre-at-best gamebook on a platform rich with high-quality gamebooks of all varieties. The attention to detail, lively presentation, and low demands on the player might make it worth playing for those who have an interest in the subject matter but little experience with gamebooks, but everyone else would do best to keep calm and carry on.