Hatoful Boyfriend ($4.99) is one of those games that grabs attention just with a description of its premise. It’s a Japanese dating simulator where you play a human girl who attends a school for birds. Naturally, every last one of your potential suitors is some type of bird or another. Doves, pigeons, finches, and more can be wooed over the course of your character’s sophomore year at the school. Unlike many games with a goofy premise, however, Hatoful Boyfriend manages to deliver a really enjoyable game. It knows when to play things straight, when to wink at the audience, when to bow to the absurd, and when to let things go off in surprising directions. In general, it’s a parody of the visual novel genre, but its plot is so meticulously crafted, it stands perfectly well on its own even if you have no experience with the genre.

You play as a girl who has been chosen as the sole human representative at St. PigeoNation, a high school that is otherwise entirely populated by various species of pigeons. It’s your second year at the school, so your character already knows most of the other students, and is quite comfortable at the prestigious academy. You’ll go through a full school year, playing various events depending on the choices you make. Those events give you the opportunity to build a relationship with one of several birds. If you fail to make a strong connection with anyone by the end of the school year, you’ll get a bad ending, so as usual for this type of game, it’s best to choose the suitor you’re most interested in and really focus on them. 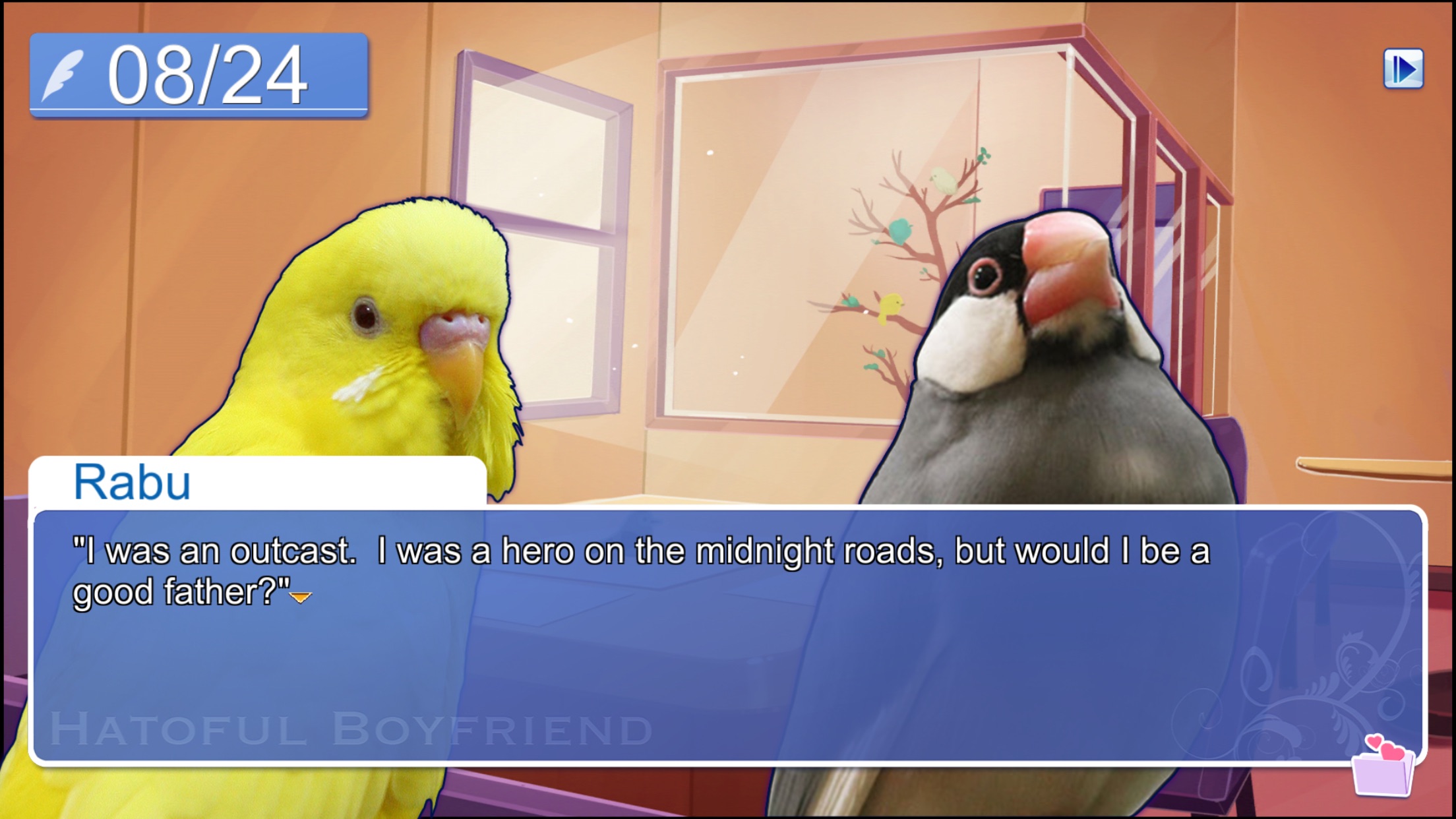 Each day presents you with a small handful of choices to make. Do you want to go to math class to increase your wisdom? Or would you rather hang out in the music room and working on building up your charm? Which after-school club will you join? Who will you eat with? The strength of your relationships will determine exactly which events you’ll come across, but your stats are also important for certain events. As you play, you’ll get to know each bird and their schedules, giving you valuable hints for your next playthrough. Each path takes around a half hour or so to complete, with the exception of the last one, which takes at least a few hours to get through. The routes share a lot of text, but the presence of a fast-forward button makes it easy to skip through parts you’ve already read.

Given its status as a parody, Hatoful Boyfriend does its best to touch on as many of the tropes of the genre as it can. As a result, the various routes offer quite a bit of variety between them. You really should play through all of them if you genuinely want to see what Hatoful Boyfriend is all about. As you run through stories, you’ll probably notice a lot of little details that point to the game’s extensive lore. 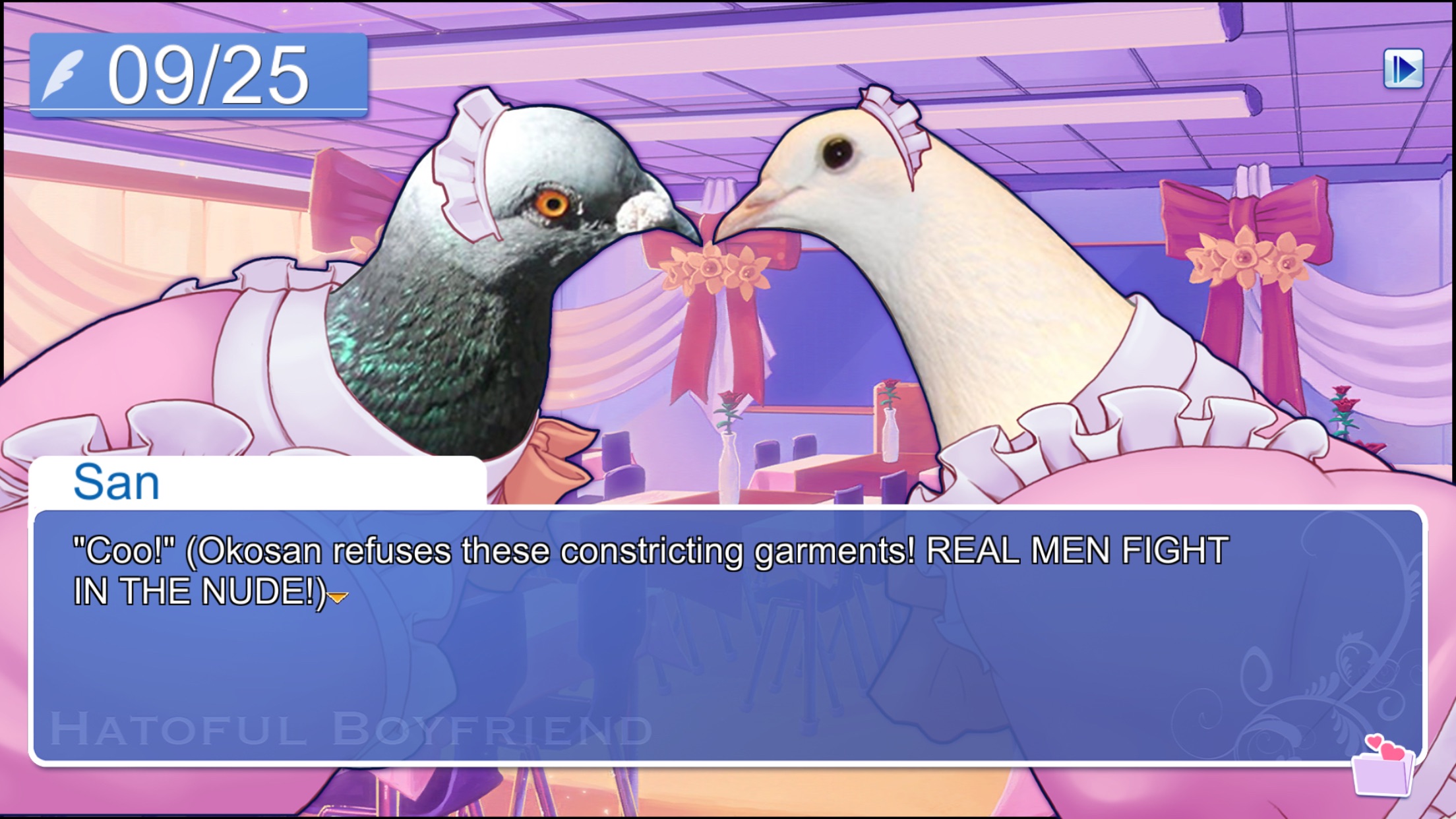 Yes, the pigeon dating simulation has lore. The more surprising thing is that the lore is worth learning about. You’ll have to see the game through to its true ending to really find out much about it, however. Until then, there are just a few things that you might not even pay attention to due to the game’s generally ridiculous tone. The dialogue has been translated well, so you’ll find plenty of genuinely funny situations scattered about as you try to find love. That quality is carried through to more than just the comedy, as the entire game is more well-written than it has any right to be.

As with any decent visual novel, it’s hard for me to extol the virtues of Hatoful Boyfriend without spoiling the fun, but suffice it to say, there are quite a few scenarios to play through, most of them are pretty interesting on their own, and the payoff for beating them all is assuredly worth it. As a port, it’s excellent. Visual novels are well-suited to iOS devices, and Devolver Digital hasn’t dropped any balls along the way here. The only things I’d love to have seen would be a button to rewind at least a few dialogue boxes worth of text and maybe a few more save slots. The game allows you to save up to twelve different files, but there are a lot of places I would love to keep digital bookmarks at just to come back and enjoy the situations again later. 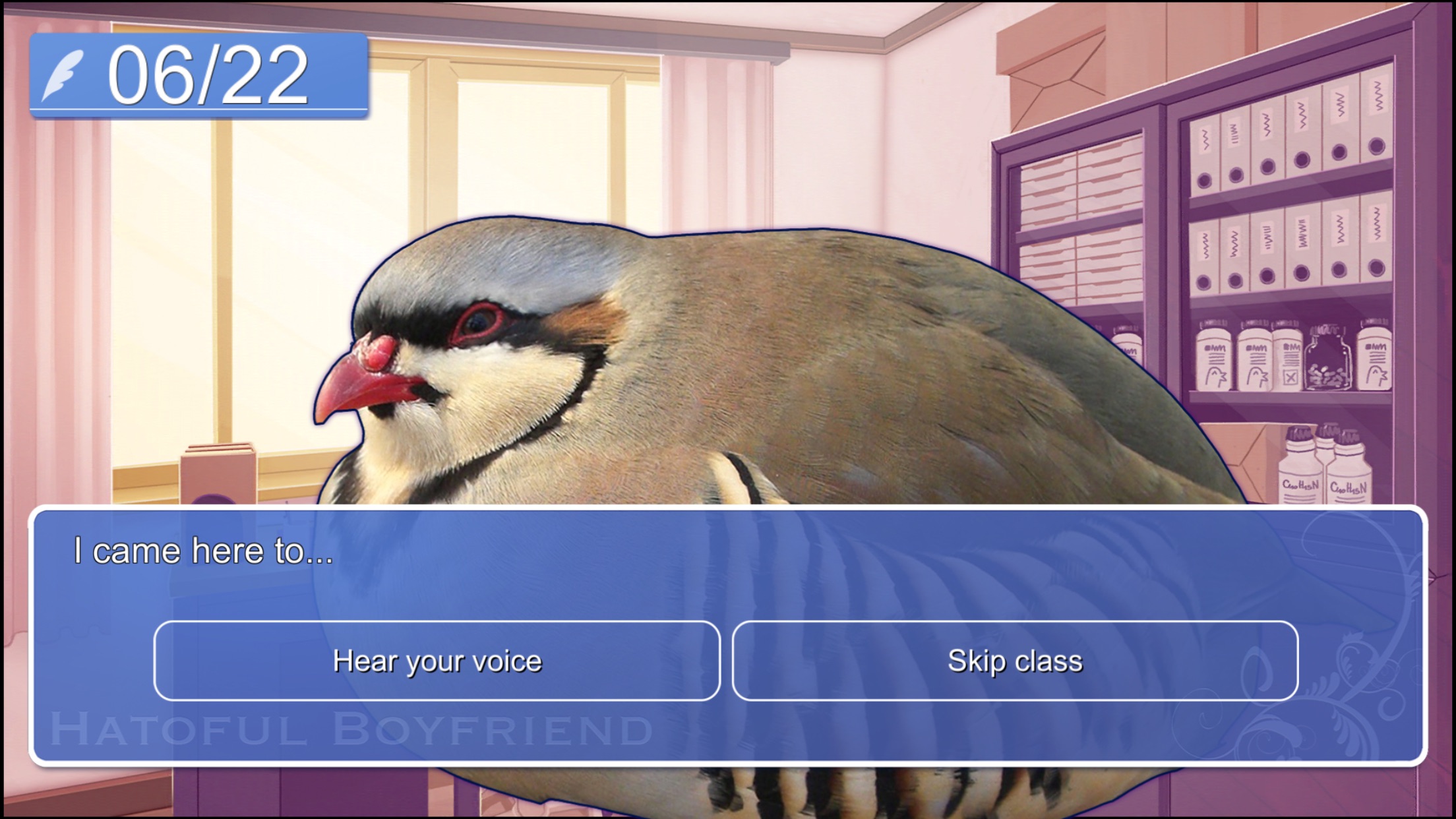 I’m quite impressed with Hatoful Boyfriend because it manages to both stick the landing on its silly premise and offer something much more substantial behind the curtain. It’s a great send-up of the Japanese visual novel genre, but at the same time, it also feels like a loving tribute. I think that its bizarre nature also strangely makes it more accessible to people who otherwise wouldn’t touch this genre. Many people have an inherent discomfort with the idea of virtual courting, but by making everything as silly as it does, Hatoful Boyfriend seems to be easier to rationalize.

In that respect, it might be the perfect gateway to an otherwise niche genre, one that is well-worth dipping into. This is one of my favorite iOS games of 2016 so far, and I strongly recommend giving it your attention, regardless of whether you’re an old hand at the genre or a newcomer. Just make sure you play it through to the true ending, because if you don’t, you’ll never truly get ahead in your studies at this strange school.