Ever since Gameloft’s Dungeon Hunter series shifted gears towards a free-to-play model, one of the most frequent requests I’ve seen come up in the TouchArcade forums has been for a game that could fill the role of a paid substitute for Diablo. Unfortunately, most of the big publishers have little interest in making games like that, and the scope of something like Diablo is just a little beyond the means of most independent developers. We’ve seen a few attempts, but they usually end up being buggy, feeling incomplete in some regard, or dropping the ball in one of many other ways. Hopes were raised last year when a couple of familiar names from the PC scene were announced for iOS. In the case of one of those names, Torchlight, it was revealed that the game would be modified to fit a free-to-play model, so everything has come to rest on the other: DotEmu’s iOS version of Titan Quest ($7.99).

There are a couple of ways to judge the results. As a port, Titan Quest has some issues, and while I’d like to wave them all away, there’s no doubt that some players are going to find them to be dealbreakers. The biggest issue comes from the inconsistent framerate. Depending on what’s going on, the framerate will bounce up and down, and when it goes down, it goes down hard. I tested the game on both an iPad Air 2 and an iPhone 6S Plus and saw the same issues, so I doubt it’s hardware-specific. I’m not generally that concerned about framerates in games like these, but if you are, consider yourself warned. This version of Titan Quest is clearly testing the hardware, and it’s finding it to be wanting. There are other things people might not like about this version of the game, such as the lack of multiplayer, the missing expansion, or some of the choices made for adapting the UI and controls.

If we look at Titan Quest relative to other iOS games in the genre, however, it’s clearly the best of the lot. It’s not even close, really. This particular genre has gone so far down the F2P rabbit hole on mobile that a solid example from the PC market can easily dispense with its competition for those looking for a quality single-player experience. On its home platform, Titan Quest is a good action-RPG that checks most of the important boxes for a Diablo clone, even as it fails to distinguish itself in any capacity beyond its unusual setting. On a platform with no Diablo, no Torchlight, and really very little at all beyond flawed efforts like Iesabel ($5.99), those qualifications are enough to put it at the top of the heap. If you want a single-player game that offers a Diablo-like experience on your mobile device and don’t want to be hit with any monetization shenanigans, Titan Quest is unquestionably the best choice for you. It’s a big 30-hour adventure with plenty of faces to smash and lots of loot to grab.

Originally released for Windows PCs in 2006, Titan Quest is a hack-and-slash action-RPG that takes you through a few interesting locales. You’ll start your adventure in ancient Greece, where it seems the gods have forsaken humanity. Monsters have overrun the countryside and are laying waste to just about everything. You play a hero who arrives in the small town of Helos only to see it under siege from a band of satyrs. Soon enough, you’ll find yourself in the presence of the Spartan general Leonidas, who you probably remember as a beardy guy who kicked some other guy into a pit while yelling the name of his city-state. The mission he sends you on will eventually see you traveling not only through Greece, but also through Egypt and the Silk Road in Asia. Titan Quest was designed by Brian Sullivan, who is perhaps best known for being the designer of Age Of Empires.

In terms of mechanics, Titan Quest plays things very safely. If you’ve played any of the Diablo games, you’ll find it pretty easy to slide in and start playing. This familiarity was seen as a detriment back in 2006 on PC, but on iOS in 2016, it’s a great selling point. Interestingly, the iOS version of Titan Quest apes Diablo in one new way. When Diablo made its way to the PlayStation back in 1998, its point and click interface was swapped out for direct movement with the dpad and buttons for various functions. Titan Quest does the same, so instead of pointing where you want your character to go and tapping on points of interest, you’ll guide them using a virtual stick and interact with objects using a context-sensitive action button.

Special attacks, items, and certain other things are assigned to their own buttons for easy access. Generally, it works fine, but the context-sensitive button can be a problem now and then. You’ll want to attack the enemy in front of your face, but the button thinks you want to grab the loot of the corpse of his friend. It corrects itself quickly enough, though. The iOS version makes liberal use of pinching to zoom things in and out, to great effect. While there are still some issues when things get clustered together, with inventory management being a particular hassle at times, the game is surprisingly quite playable on a tiny touchscreen given its origins as a point-and-click PC game.

As I mentioned earlier, Titan Quest suffers from some fairly significant, and somewhat frequent, framerate drops. It’s playable, but if that kind of thing bothers you, it’s likely going to be an issue. The game also chews through the device’s battery quite quickly, so you’ll want to be careful about playing it on the road if you can’t back to a charger within a reasonable span of time. I also encountered a few collision bugs during the course of playing, but nothing too dramatic. Depending on how your tastes go, the biggest drawback with this port might be the lack of multiplayer. The PC version allowed up to six players to join forces, which not only allowed for some fun interactions with friends, but also made it more feasible to specialize with your character builds. You could plan around another member of your group covering potential weaknesses in your character, but that’s not an option here.

Still, I think that just about any character should be able to power through the game on normal difficulty. The higher difficulty levels might rule out certain combinations of Mastery (the game’s take on job classes) and skills for a single player, though. I haven’t had much time to tinker around with those settings too deeply yet. I wish there were some way to make the multiplayer happen. Titan Quest, like Diablo, is exponentially more enjoyable in groups. While I certainly appreciate having a nice, deep, single-player RPG to sink my teeth into, it would have been nice to have an option to team up with others. Given the price, I’m not too upset about the missing expansion, but it would be nice to see that as possible extra content in the future. New players won’t miss it, but anyone coming to the game with previous experience will likely feel a bit of phantom pain. 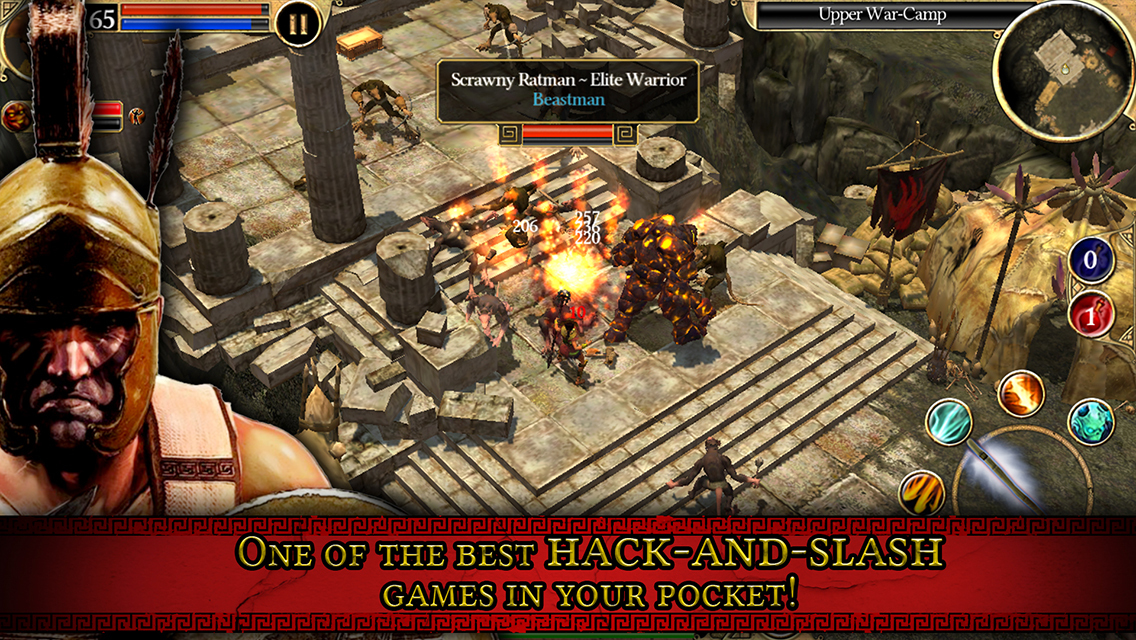 In spite of the technical issues and the lack of a multiplayer component, Titan Quest nevertheless manages to be the best game in this genre we’ve seen on iOS yet. Taken for what it is, this is an impressive single-player action RPG that should be in the library of any iOS RPG fan. The technical issues drag it down somewhat, and if you’re sensitive to framerate drops, those problems may very well kill the game for you, but otherwise, there’s no reason not to bite on Titan Quest. Action-RPG gems of this size and quality don’t hit mobile very often.