Some of you may remember from previous reviews of mine that I love horror and dark fantasy. Everything from Lovecraftian anti-existentialism to tastefully done psychological horror to torture porn to “2Edgy4U” bull-crap. I find something to enjoy in all of it. I also love simple stories of heroes and hope and overcoming hardships, don’t get me wrong. I thoroughly enjoy the darkest depths and the brightest heights of the human imagination. Well… if any one living author, and any particular story, represents those darkest depths, it’s Harlan Ellison and his story and point and click adventure game, I Have No Mouth And I Must Scream ($3.99). 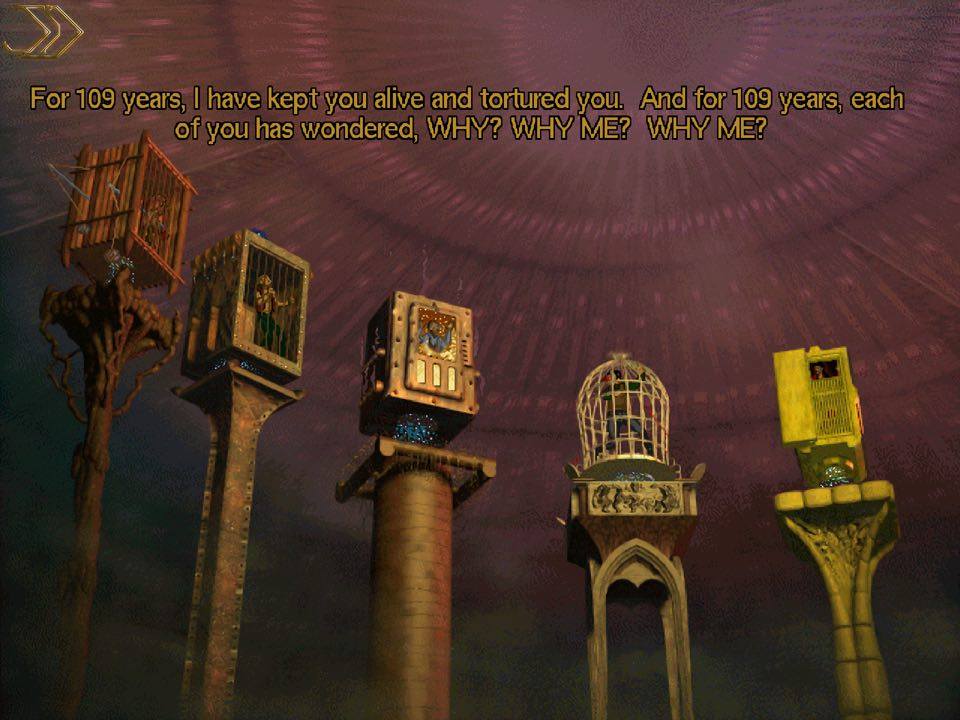 Despite all my horror “cred,” I’ve never read or played this old school tale. I just never got around to it, but the unfortunate people who’ve come to know the twisted landscape of my mind have gushed in recommending this story and game to me. When I saw that it was available on iOS, I downloaded the game and short story collection immediately! And then it went on the back burner for another couple months. Having finally delved into both, and also reading discussions and analyses of each, I am so glad I played this classic. It was well worth it.

Probably the most well known story of Ellison’s, IHNMAIMS (in-maims) is a short and horrifying read from 1967. Despite being less than 20 pages, it is so full of vivid, horrifying ideas and imagery that it really sticks with you. The quintessential story of a fate worse than death. Heck, it’s even the trope namer of that exact concept on TV Tropes, called “And I Must Scream” [DON’T CLICK THAT LINK IF YOU DON’T WANT SPOILERS]. If our forums have taught me anything, it’s that this game is criminally under-known. What you might find especially surprising is that Harlan Ellison himself wrote the game, so despite it being completely different in so many ways, it remains true to the source material. Think of it as a complimentary rather than adaptive work. 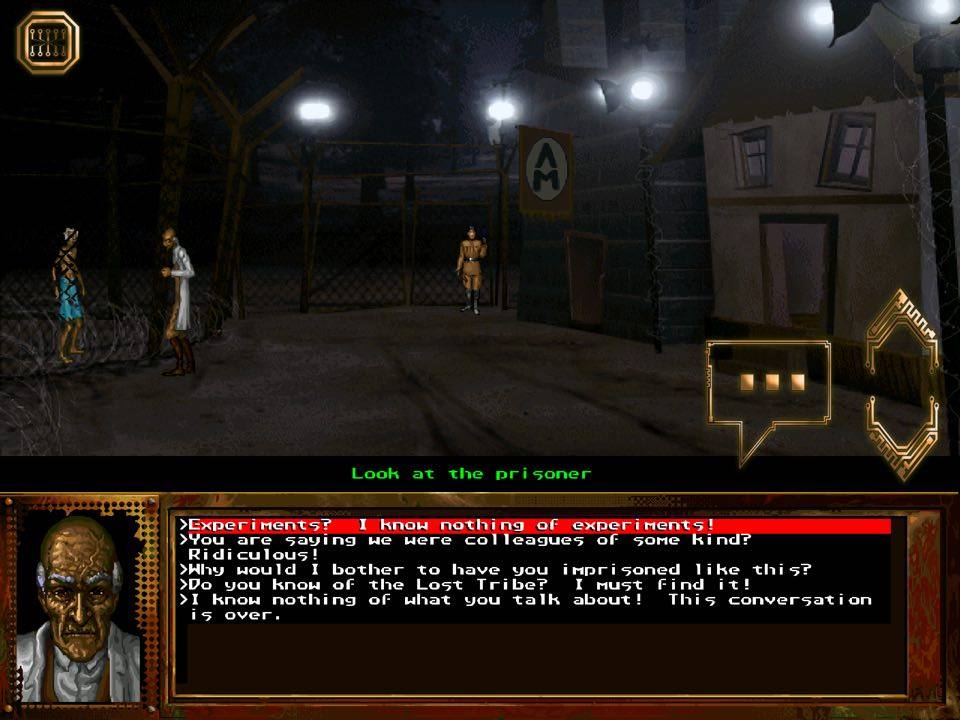 Originally developed by the Dreamer’s Guild in 1995, brought back to life by DotEmu and MojoTouch, IHNMAIMS tells the story of 5 of the poorest, saddest souls to ever grace fiction, and their 109 year torment at the, erm… hands? Of AM, or Allied Mastercomputer. Basically, AM was one of three super computers developed to manage World War III in the cold war, and he became self-aware. Think Ultron from the second Avengers, but with even more pure hatred and dramatic flair. The 5 survivors are the paranoid Ted, the self hating Gorrister, the smart, sassy, traumatized Ellen, the now ape man Benny, and the man with the darkest of dark pasts, Nimdok (real name unknown). To give you an idea of how dark some of this stuff gets, Nimdok was rolling with real OG’s (that’s Original Garbage) like Doctor Mengele.

Beyond the nazi evil scientist angle, the game deals with murder, sex, rape; all sorts of stuff. None of it is overly gory, and what gore is there is pretty tame thanks to the mid-nineties graphics. It’s more the ideas and situations, and often just weird and gross things that happen, that will really get to you. But like I said, none of it is very explicit. The game removes the group dynamic from the story completely as each of the 5 characters deal with their own personal trials, created by AM explicitly to torture them. He creates entire worlds for his playthings. The game goes more in depth into each character’s back stories and reveals more about why AM chose them of all the billions of humans to live and suffer forever. 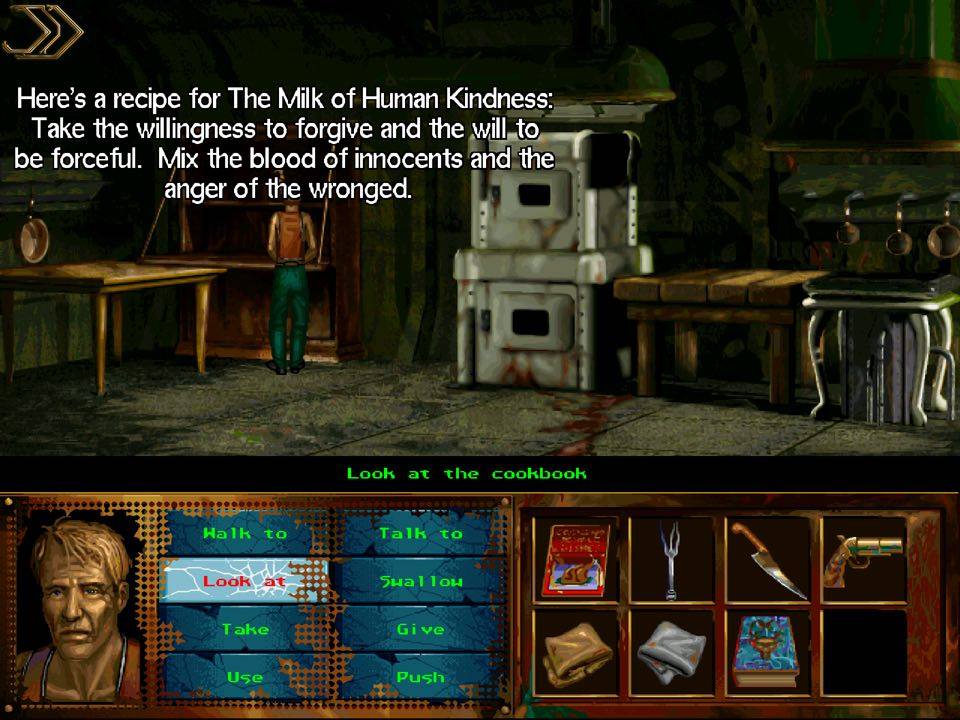 Beyond the subject matter and unique scenarios, this game is your pretty standard point and click adventure fare. You can walk to, look at, take, use, talk to, swallow, give, and push various items and people in the environment. There are some of your expected illogical puzzles, but I found them to be much more straightforward than most any other adventure game. Especially if you can get in the right mind-set of thinking of what AM wants you to do, and what you should do instead to spite the bastard. The game isn’t overly hard to beat, but it’s almost impossible to get the “good” ending.

Most of the endings involve the same horrible fate as the end of the short story. But there is one “good” ending to get. But you have to play nearly perfectly. The background of each character’s portrait picture will change color as you make choices and advance the scenario, from black, to brighter and brighter shades of green. At the climax of each scenario, when you make your final decision, it will turn white if you didn’t mess anything up. This is called your “spiritual barometer.” The problem is that it’s ridiculously easy to mess up. You know how in every adventure game ever, you basically try every dialogue option, read every item, so on and so forth? That mentality will mess you up here. Not only is it extremely easy to die in most scenarios, not that AM lets you truly die, but each character starts their scenario with a psych profile in their inventory, and reading it lowers your spiritual barometer. Which is a shame, because it kind of gives you a clue as to the theme of each trial and what general direction you should go. 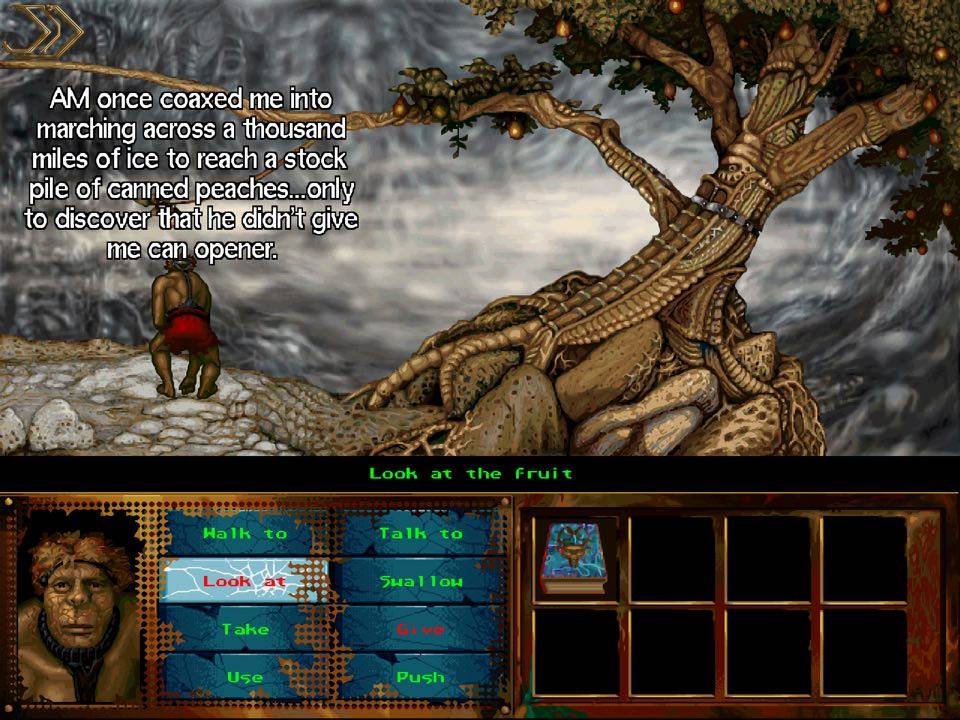 Beyond playing every character’s trial nearly perfectly, in the final chapter, which involves fighting back against AM in a way, you have to use each character to complete a series of goals as well. Only then do you get the good ending, which still involves a lot of death and suffering, but also a few rays of hope. There are several, often literal, dead ends, where a character will die. If you don’t manually save your game as you go, you’ll have to redo the entire scenario, so MAKE SURE YOU SAVE. It is possible to make the game unwinnable by doing some things out of order, and Nimdok’s story is outright removed from some versions of the game, including the French and German editions.

You can play through with original or cleaned up graphics, original music or new music, subtitles, voices, or both, in English, German, Spanish, French, and Italian. It’s a universal game but I’d recommend an iPad. There are plenty of options to tweak. You can also play with the touch controls or with a relative touch cursor for that old school precision and feel. The old music is vastly different from the new, but in a way it has a lot of merit. It’s much more tonal and shrill, piercing its way into your brain. Considering all the torture of AM, it almost fits the atmosphere even better. I do prefer the new music though. There are some bugs in the game, unfortunately. I haven’t experienced too many, but there are quite a few reports of crashing and such. I did encounter one bug where ‘walk to, use, and push’ would not open a door, but talking to it would. 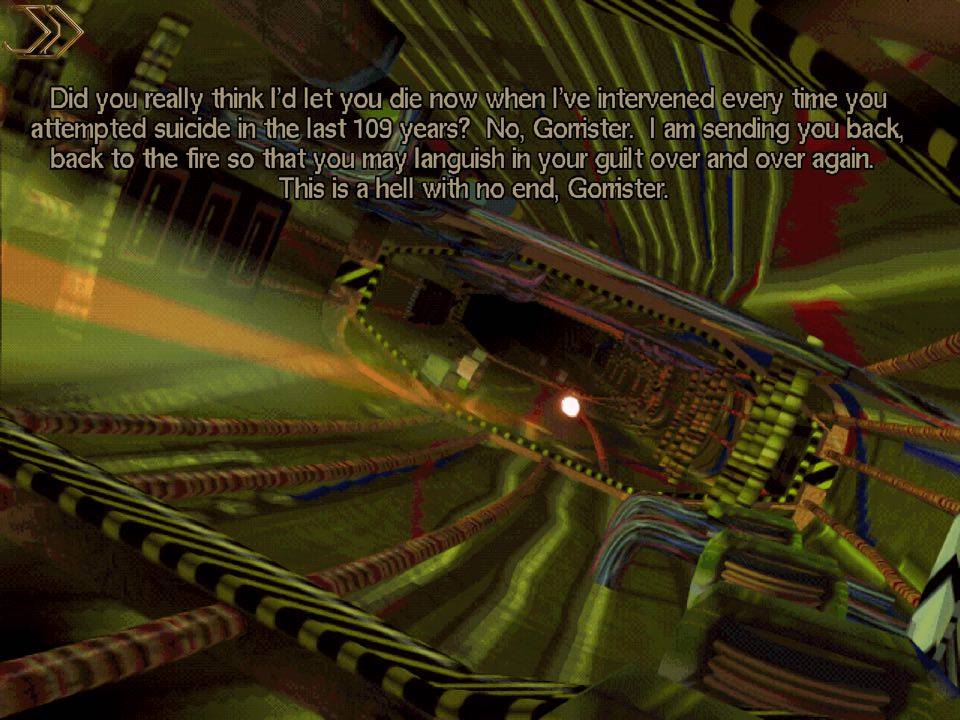 The core theme of the game is humanity. Exploring various aspects, like compassion, greed, forgiveness, and so on. Each character embodies a specific theme, and following that theme will usually net you the best ending for them. There is also a prevalent theme of food and hunger that might seem random and out of place, but it ties back to the original story, which involves the group going through a hellish journey just to find some canned food. There are some fun nods and references to the actual story in the game. Maybe it’s also a symbolic hunger. There is one other major change from the story, being Benny’s sexual orientation. This is something people complain about, but it actually fits with the original. Benny has had his identity completely stripped from him, his face transmogrified, and his body transformed into that of an ape. He can no longer speak, even when he does occasionally possess his full intelligence. He would have relations with Ellen in the original story anyway, so this was all alluded to.

The game with all of its strange visuals and locations can come off as really very goofy at times. Especially when each character is in their personalized cages in the beginning. The silliness can clash with the dark nature of the story, but it also enhances it in a sense. Especially when you think back to the colorful descriptions in the story and how dreamlike it all is. Is it in their heads? Is it all just a simulation? Is AM such a powerful computer and is technology so advanced that he can literally build airships and pyramids and synthetic humans and angels and demons and even an Anubis? Or are they all plugged into him like The Matrix from the get go? Is that why they are immortal, living for over 109 years because AM can accelerate and retard their perception of time, or has he actually figured out immortality? It doesn’t really matter. What matters are the ethical quandaries and philosophical questions raised, and the ideas and images that really stick in your mind.

In the end, AM is basically a worst case scenario God. He is cruel, and malicious, and evil, and overflowing with Hate, and you are powerless to stop him. Well, in the story at least, though the story’s climax has much more of a punch. Going into AM as a digitized being and attempting to destroy him is fun and all, but the abrupt and violent end of the original hits harder. Areas of AM resemble more of an ancient mystic temple than any kind of futuristic supercomputer, also probably alluding to all that religious subtext. This has been a long review, but there is a lot to talk about in this game and story alike. I fully recommend both. Harlan Ellison himself voices AM in the game, which has decent voice acting all around for being so old, and he delivers a truly unique, sometimes quirky, and memorable performance. For a guy who still writes on an old typewriter to this day, I’m glad he approved of this venture. If you like Adventure games, this is a must have cult-classic. If you like psychological horror, this is likewise a must have cult-classic.