When it comes to people like me, there’s no such thing as “too much" Lovecraftian horror. I love to rep H.P. and the Big C whenever I can. There is just something so wonderfully visceral and imaginative about eldritch horror. Clearly, I’m not the only one who has been sucked into this particular abyss. We’ve already had a few solid mobile outings for Cthulhu and his gang of incomprehensible amorphous ungodly powerful monstrosities, such as Call of Cthulhu: The Wasted Land ($4.99), and a port of the phenomenally insane board game Elder Sign: Omens ($0.99). Technically we’ve had this game since December of 2013, but it’s recently been re-launched in its final form with a happening new icon and complete feature list. I give you The Moaning Words (Free). 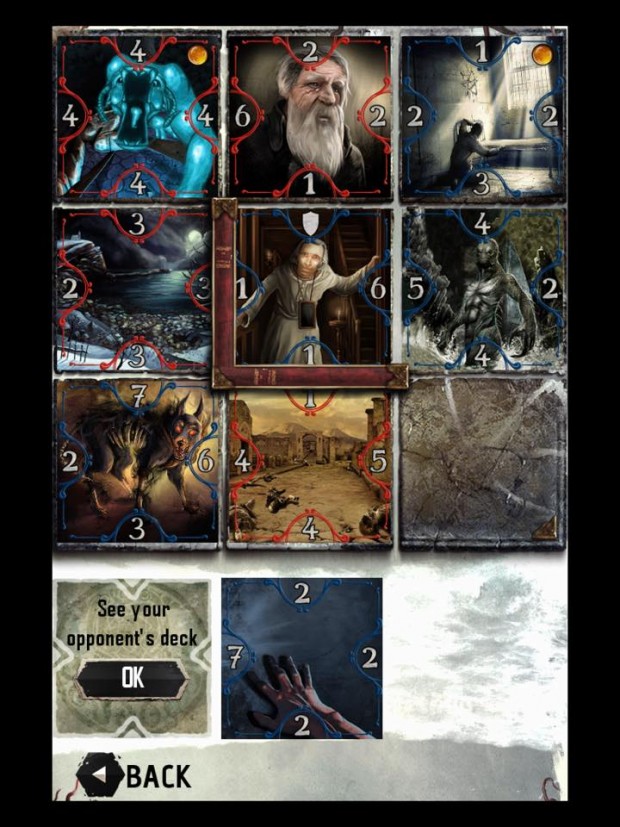 Have you ever played the Triple Triad card game from Final Fantasy VIII and thought to yourself, “you know what would really improve this game? Horrible monsters, some gore, a dash of madness, and the great old ones!"? Well somebody sure did, because that’s basically what this game is. A collectible card game that’s simply dripping and oozing the horrible black mire of the Cthulhu mythos, with quick and simple battles and 100 cards to collect. Developed by Thumbstar Games, perhaps most well known for Talisman: Prologue ($1.99), as well as Byook, a French developer of interactive visual novels ( See their app library here ), we definitely have an interesting title on our hands.

So if you’ve never played Final Fantasy VIII and its specific version of Triple Triad, which I should add can also be found on mobile through the Final Fantasy Portal (Free) in an overly monetized hell, here’s the skinny. You and your opponent place cards on a simple three by three board. Each card has a number or symbol on each side. Higher numbers turn enemy cards into your own when you make your move, and vice versa. There are also walls on the board that block moves, and cards with a shield symbol instead of a number acting like a wall. The sword symbol can beat or be beaten by any number. Finally, you are allowed one powered card in your deck of 5. Powers vary from netting you more currency, raising or lowering the numbers of adjacent cards, and a lot more. Each time a card is flipped, it can flip the card adjacent to it if the numbers are higher, so it’s possible to create huge chains and combos. 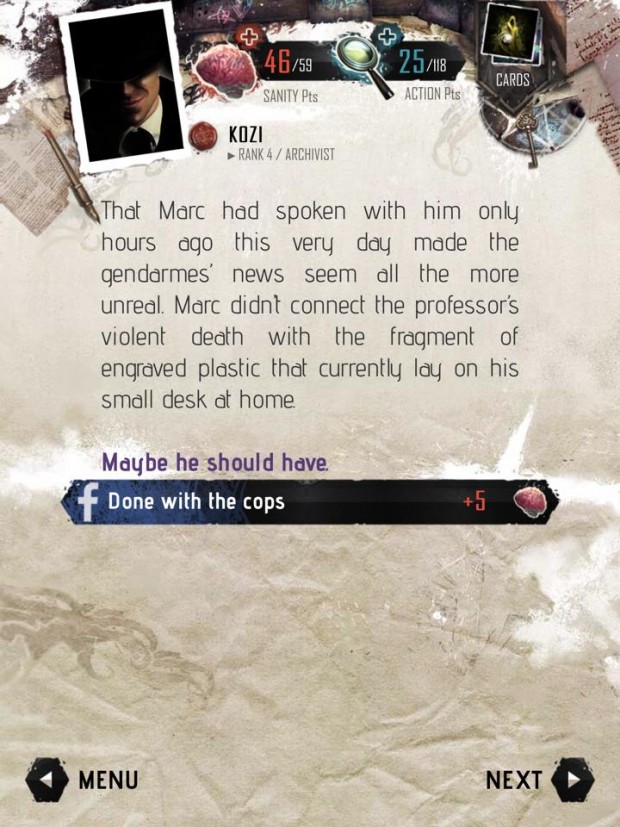 Here’s an overview of the things you’ll need to keep track of across the various modes. Sanity Points (SP), Investigation /Action Points (AP), Gold, and Elder Signs. SP is used in single player challenges, AP is used in multiplayer battles, and both are used in the story mode. You better believe there’s a story mode in this game. And it’s a pretty great one too, written by author Alan Dean Foster, best known for his Star Wars and Aliens franchise movie novelizations in addition to his own original fiction. He brings all the wonderfully descriptive horror imagery a little girl like me could want.

In the story mode, you’ll follow three protagonists through episodic chapters with branching paths. Every action you take requires action points, and some take or risk loss of sanity points, which recharge slowly each day. The most fun and gruesome paths will sap tons of sanity and can lead to death. But they are so tempting. So compelling. Like the artifacts of the elder gods themselves. Some story options require you to enlist the aid of friends from Facebook and Game Center, and others require a special relic that you can save up for or buy outright with the premium currency, the Elder Signs. This story is great. Atmospheric audio accompanies every page, punctuated perfectly by creepy sound effects. A few spelling errors here and there, but I forgive them. Sometimes you’ll have to solve a puzzle to proceed, and win or lose a battle against the AI to decide your path. A single card is hidden in three parts throughout each chapter as well. 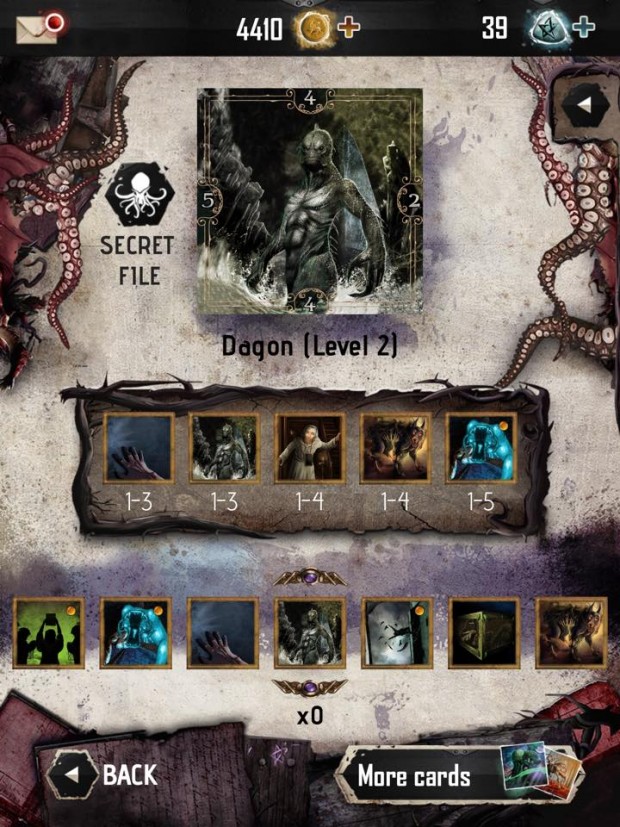 This story mode is the high point of the game. The low point is in the timers. And currencies. And energy meters. And oh my goodness, are there a lot of these. Enough to send you into a hysterical frenzy. Every conventional freemium design staple is present here. Your energy meters of SP and AP can be refilled with consumable items from the store. These items can be bought with gold, and it’s actually really easy to farm gold in the Classic battle mode. Even refilling my meters constantly, I had a net gain of gold. If you save up Elder Signs, you can purchase advanced booster packs as well as relics that bestow permanent bonuses, like double gold forever, reduced loss of AP and SP, the ability to see the enemy’s deck for free, and the aforementioned story relic.

Yes, it will take you a very long time to save up for all of this naturally. But if you wanted to drop 2, 5, or 8 dollars on the game to support the developers, you can easy buy a couple of them and ease your journey. This is definitely a slow burn title. Each story mode chapter is segregated by a 24 hour timer. You can also sacrifice extra cards for a chance at great rewards, though naturally, these also take several hours. As a note, you always keep at least one of each type of card, forever. Some cards have secret files, divulging the history and mythos of Lovecraft. Extra incentive to find them all. You also have a leveling system tied to your standard mobile rotating objective mission system. Stuff like ‘win so many matches in blank mode, play so and so part of the story, buy however many of some item from the store,’ etc. Thank the Gods, if you meet the criteria to complete a mission, when it rotates in, it will already be completed. You’re rewarded with small amounts of elder signs for completion. You can also level up, which increases your SP and AP totals, refills them instantly and completely, and gives you access to higher level cards in battle. 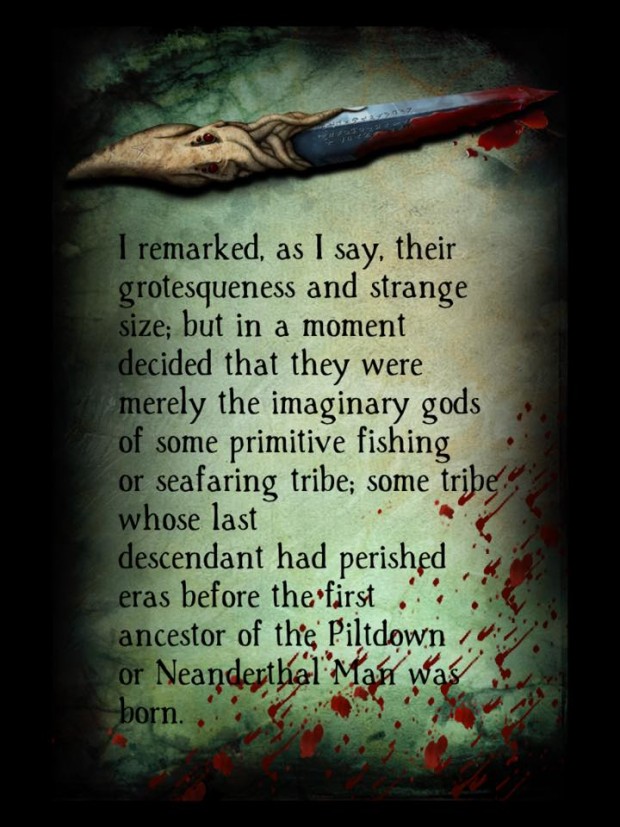 It is admittedly pretty hard to save up those elder signs. Like any freemium game, you are nagged incessantly to spend small amounts all over the place, and those small amounts add up. 5 or 10 to change your opponent, randomly pick a different reward, fast forward various timers, skip a mission objective, etc. But as a free game, this is well worth playing at least a little bit. Even if you only play the story mode once a day, you can have a lot of fun with this game. I’ve played a couple hundred battles by now and I’m still chugging. But then, maybe I’ve just been long lost to lunacy.

One neat addition to this game? User’s Tales. You can actually write your own branching story for the community to play. Naturally, there is some absolute trash to sift through. One story was trying to direct readers to a YouTube channel about Call of Duty, and another was simply a ‘test’ story, but it’s a super cool feature nonetheless. I saved one of the best parts for last. There are 2 short stories from H.P. Lovecraft, recreated as jaw dropping visual novels, full of great art. The first is Dagon, and it’s practically free. You can get it once you complete the tutorial. The other is The Nameless City, and it’s much more expensive. If you are even mildly curious, pick the game up and enjoy the story mode and free visual novel. If you’re a Lovecraft maniac, you’d have to be absolutely eye-bulgingly skin-scratchingly insane not to give this a download.