Hello, gentle readers, and welcome to the RPG Reload, the weekly feature where I randomly generate an article about an RPG. Each week, we take a look at an RPG from the App Store’s archives to see how it holds up in the here and now. It’s a chance to look back on old favorites, see how they stack up in the overall library, or simply to go further in-depth than our reviews typically allow for. As the ersatz Higgins of this estate, I try to pick a balanced selection of RPGs from week to week. If you feel like I’m missing something important, however, please let me know. You can do that by commenting below, stopping by the Official RPG Reload Club thread, or by tweeting me at @RPGReload. I can’t promise your suggestion will appear soon, but I’ll put it on the master list. 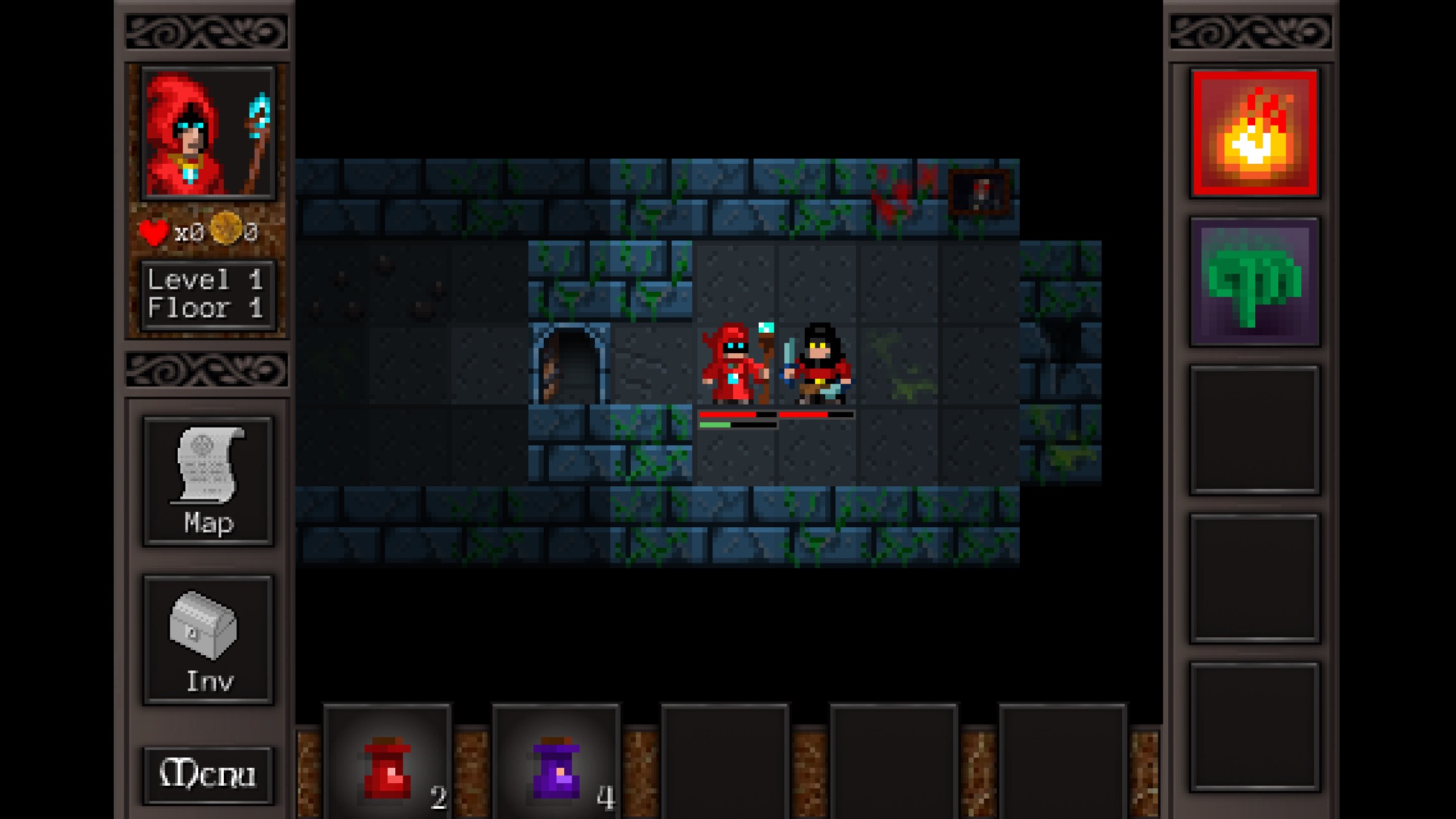 As regular readers know, I like to feature roguelikes in the RPG Reload now and then. While I can certainly understand how some don’t see them as RPGs, I feel like they’re very relevant to the genre. It definitely doesn’t hurt that iOS is flush with great examples of the sub-genre, either. While the platform isn’t terribly well-suited to more complex, traditional roguelikes, its proven to be a great home for what a lot of people call roguelites. These games trade away most of the complicated systems found in core roguelikes in exchange for accessibility and more simplified controls. In doing so, they tend to be quite reminiscent of early roguelikes, which to me represent one of the pillars that video game RPGs were built on. They might lack in terms of possibilities, but the best of the bunch hit most of the important notes of a good roguelike. Specifically, the tension of knowing anything could happen, the joys of building up a character into something with a fighting chance of winning, and that evil temptation to keep exploring even though it will likely get you killed.

Cardinal Quest ($3.99) is one of the better games of this type on iOS. Originally developed and released on PC in 2011, the game made its way to mobile devices a year later in June of 2012. It’s the work of Tame Tick, an independent developer set up by Ido Yehieli. He’s been making games in the independent scene since the 2008 release of CryptRover. That game started life as a 7-Day Roguelike, a type of challenge where an entire roguelike must be made within a week. He’s since worked on a number of projects, most of which are roguelikes of some sort. Yehieli’s most recent released iOS work was as a collaborator on the excellent Auro ($1.99)  from Dinofarm Games. He’s also working on the upcoming puzzle game Slayaway Camp. Cardinal Quest was developed in cooperation with a few other key people, including Joshua Day and Ruari O’Sullivan. Cardinal Quest appears to be the only well Yehieli has returned to in his decade-long run of game development, with the sequel to the game releasing a couple of years ago. 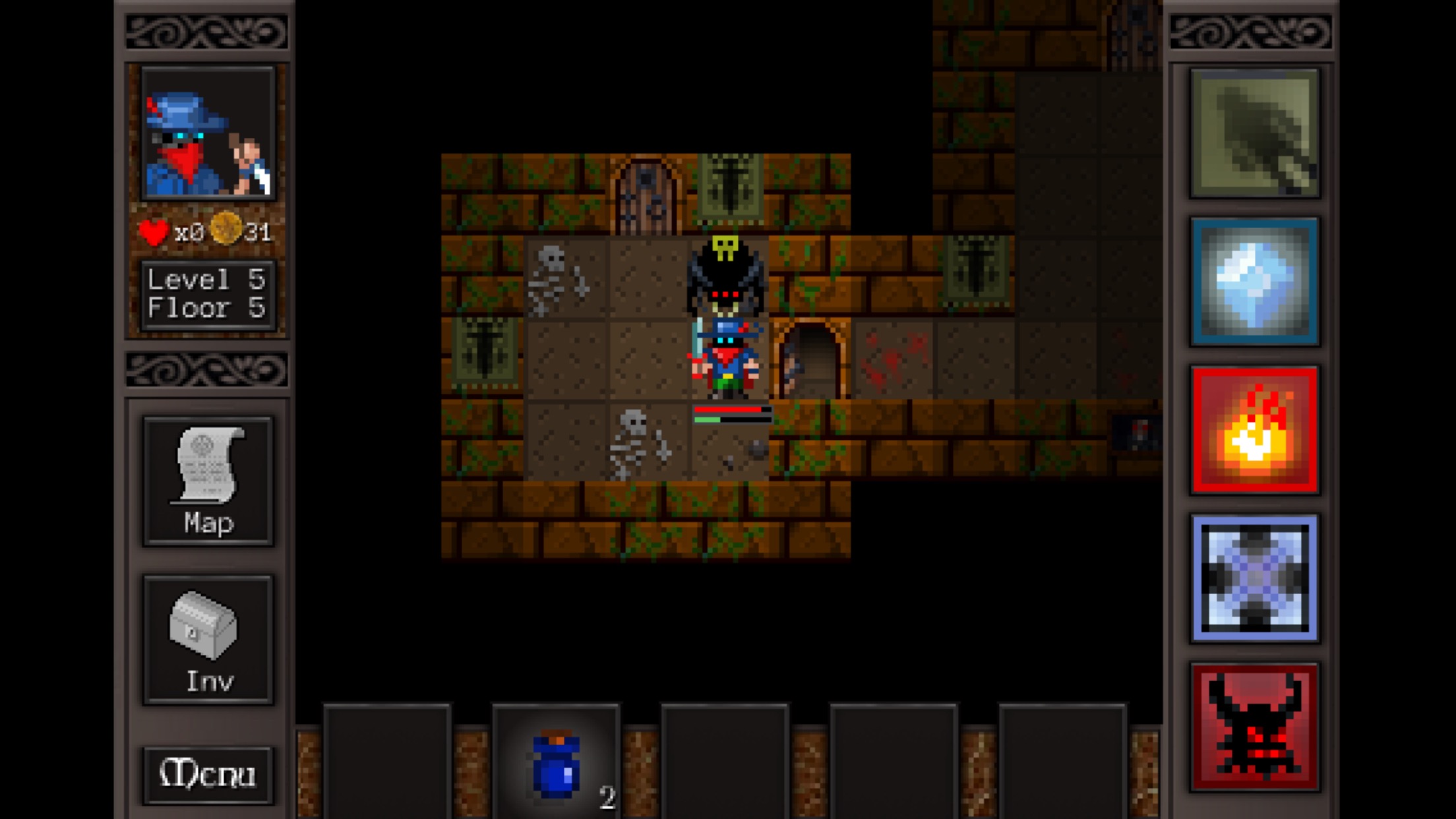 Probably the thing that Cardinal Quest is best-remembered for is just how significantly it streamlines the formula of the genre. You can choose from three different characters, each with their own stats and starting abilities. When you gain enough experience points, you’ll level up, but you won’t have the opportunity to customize your character. As you comb through the randomly-generated floors of the dungeon, you’ll find a ton of loot in the form of new equipment and spells. The latter will be automatically assigned to one of your quick-use slots if one is open. Otherwise, they’ll be sent to your bag. As for the equipment, if it’s better than what you’re using, your character will automatically equip it and sell the old piece. If it’s worse, he’ll simply sell it off, and if there’s any doubt, to the bag it goes. While there are some advantages to paying careful attention to what you’ve picked up, you can more or less operate on auto-pilot and get away with it.

Looking at the inspirations Yehieli cites for the game, it’s not hard to see how it ended up being the way it is. Rather than pointing to any specific roguelikes, Yehieli mentions games like Gauntlet, Golden Axe, and the old red box edition of Dungeons & Dragons. Those are three pretty different games, but if you look at the ties that bind them, you can start to see a picture of Cardinal Quest forming. The main difference, of course, is that Cardinal Quest adheres to the basic gameplay structure of a roguelike rather than the more action-oriented focus of games like Gauntlet or Golden Axe. You’re searching each floor turn-by-turn, looking for the stairs down to the next area. At the end of it all, a minotaur awaits, and if you best it, you’ll win. Unlike many roguelikes, Cardinal Quest generously gives you two lives to clear the game with. Why two? You’ll have to finish the game to see the reasoning. Until then, just be thankful that you have that little assist. 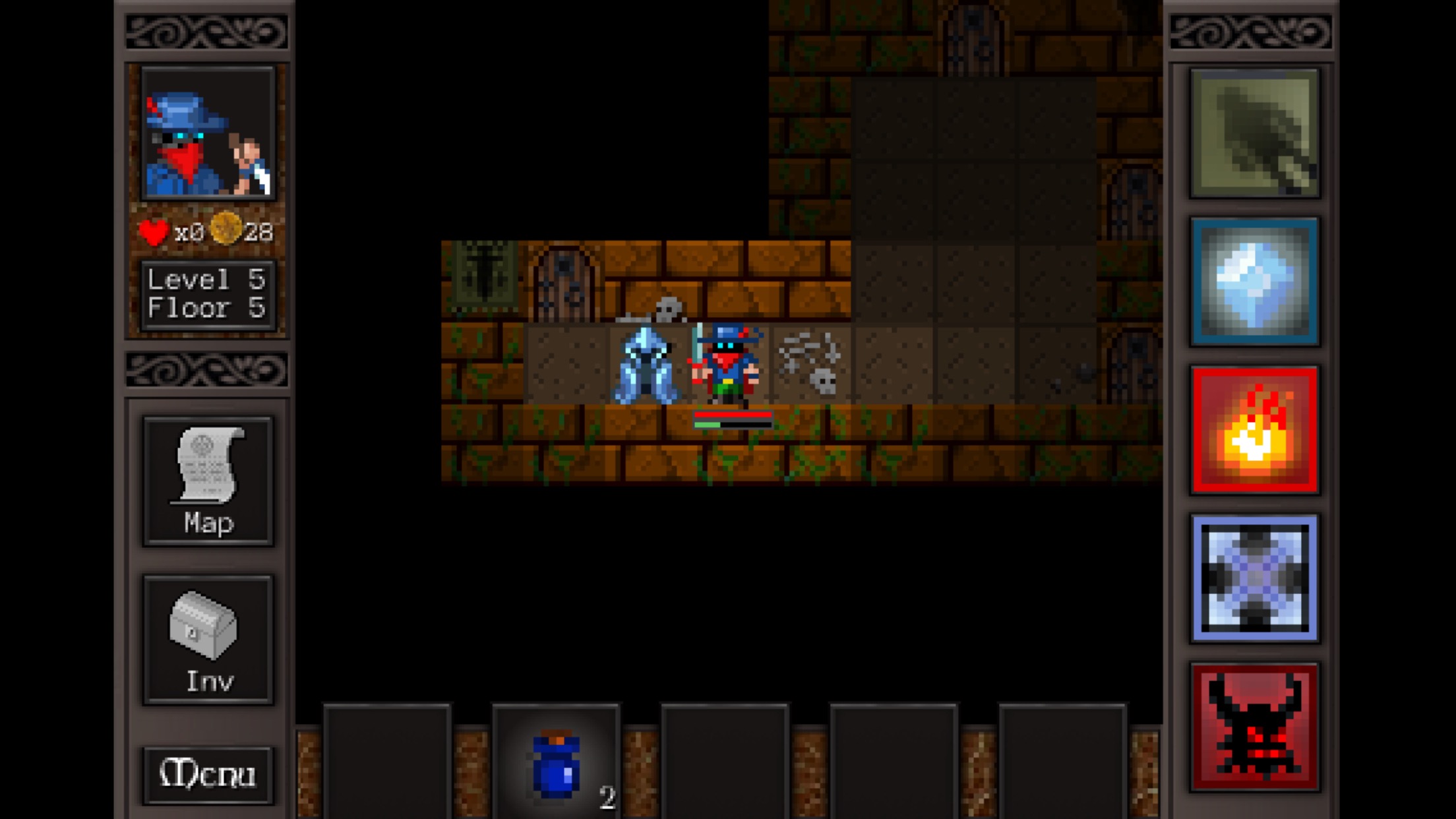 Cardinal Quest ends up feeling like the zippier cousin of Sword Of Fargoal (Free) as a result of all of this streamlining. There’s plenty of strategy to game, particularly with regards to spell management, but the way the game handles inventory means fewer trips into the menus and an overall faster pace than many roguelikes. The game starts off rather gently at first, but the difficulty spikes up fairly quickly, so you’ll want to make the most of those early floors to get yourself good and powered up. The best thing you can do for yourself is to get a good selection of skills and spells built up. If you’re playing the wizard, your life will depend on that, but the thief also needs a good assortment in order to survive. The most difficult character to win with ends up being the warrior, so if you want an extra challenge, he’s probably the way to go.

While Cardinal Quest has, in my opinion, been greatly surpassed by its sequel, the core mechanics and design still hold up well against the considerably stronger competition in the genre on iOS today. There are just a couple of problems, really, but they are kind of significant. First, this is one of those games that pays no mind to the mute switch. It’s not a game-breaking point, but it does make it more difficult to fire up the game in discrete situations. The bigger problem is that the game doesn’t control properly on larger screen sizes. While everything appears to be okay, hitting any buttons, tabs, or objects requires you to tap to the left of the item you want to interact with. It’s generally just a mild annoyance, but it makes it easy to activate a skill you didn’t mean to, a situation that can mess up your whole strategy. 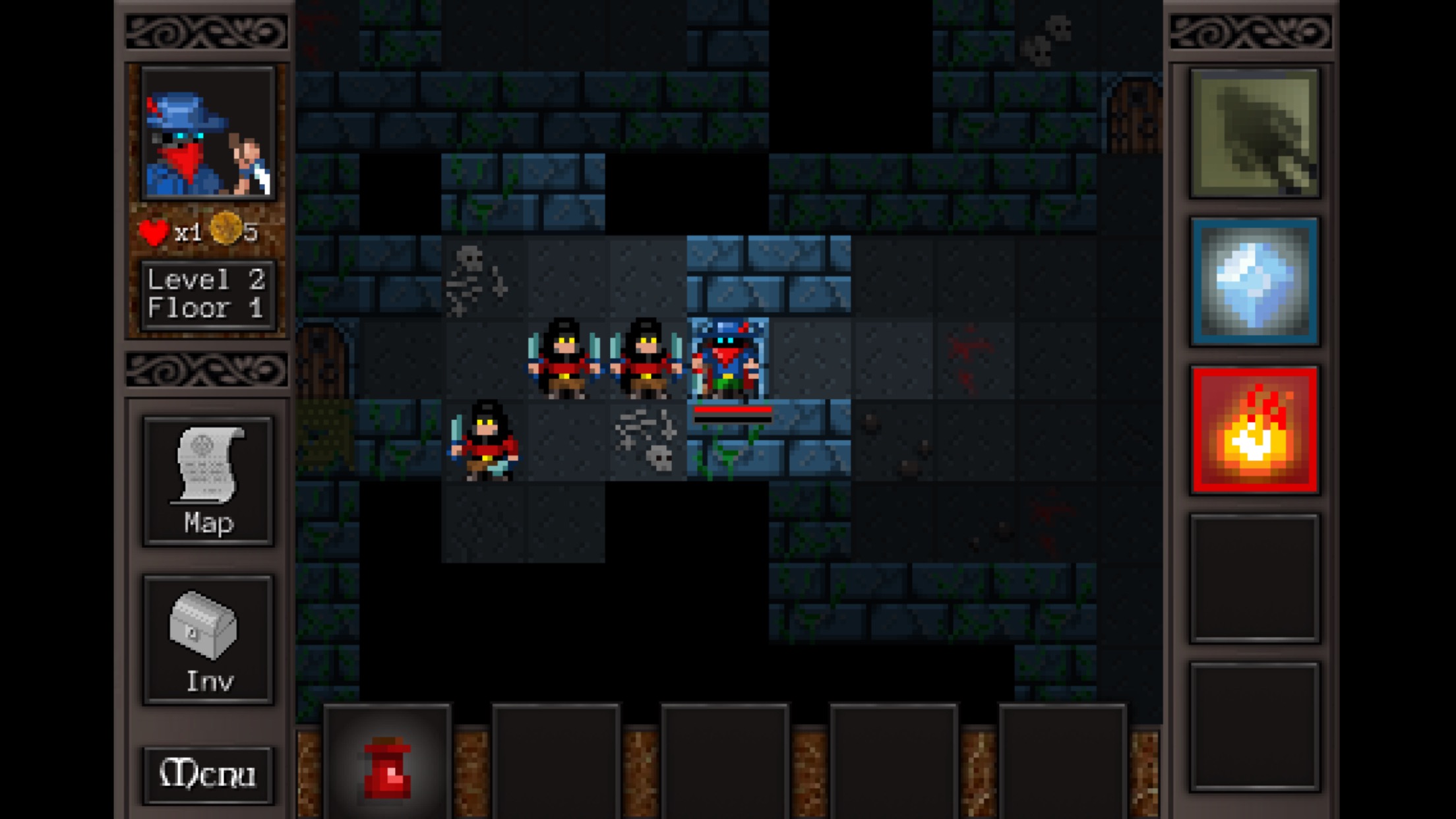 The last update to the game came in November of 2013, and with the sequel being released, it seems unlikely that the original Cardinal Quest will see its issues resolved. To be fair, it’s not as though the game is unplayable as much as it awkward to adjust to. It’s probably not worth it for the developer to go diving back into the code, especially with Cardinal Quest 2 (Free) replacing the first game as effectively as it has. The first game is a historical curiosity more than anything at this point, something you might want to play if you’re interested in the evolution of the genre or the series in particular. As I said, it’s still quite fun, but even I have to admit that the follow-up is a greater game in virtually every respect.

That’s just my take on Cardinal Quest, though. What do you all think? Would you like to see this one updated, or are you fine with the sequel taking its place? Do you like the way it simplifies certain aspects, or would you rather have that stuff be hands-on? I want to know, so please leave your comments below, post in the Official RPG Reload Club thread, or tweet me at @RPGReload. I’m also going to give an extra call for mail for this month’s RPG Reload Podcast. We’re covering the first Dragon Quest ($2.99), and so far, we don’t have any letters! You can solve that problem by sending your questions or comments to [email protected]. As for me, I’ll be back next week with another great RPG. Thanks for reading!