Hello, gentle readers, and welcome to the RPG Reload, the weekly feature where we rummage through garbage to find loot. Each week, we take a look at an RPG from the App Store’s past to see how it’s holding up in the far-flung future that is now. It’s a chance to revisit old favorites, reflect on the iOS RPG library, or simply to take a deeper dive than our reviews typically allow for. As the wielder of the legendary blade Excalipoor, I try to set a balanced schedule of RPGs from week to week that reflects the diversity of the genre. If you feel like I’m missing something important, however, be sure to let me know. You can do that by posting in the comments below, dropping by the Official RPG Reload Club thread in the forums, or by tweeting me at @RPGReload. Your suggestion will be added to the master list, which means you might see it several months down the road. Hey, no one ever said it would be easy! 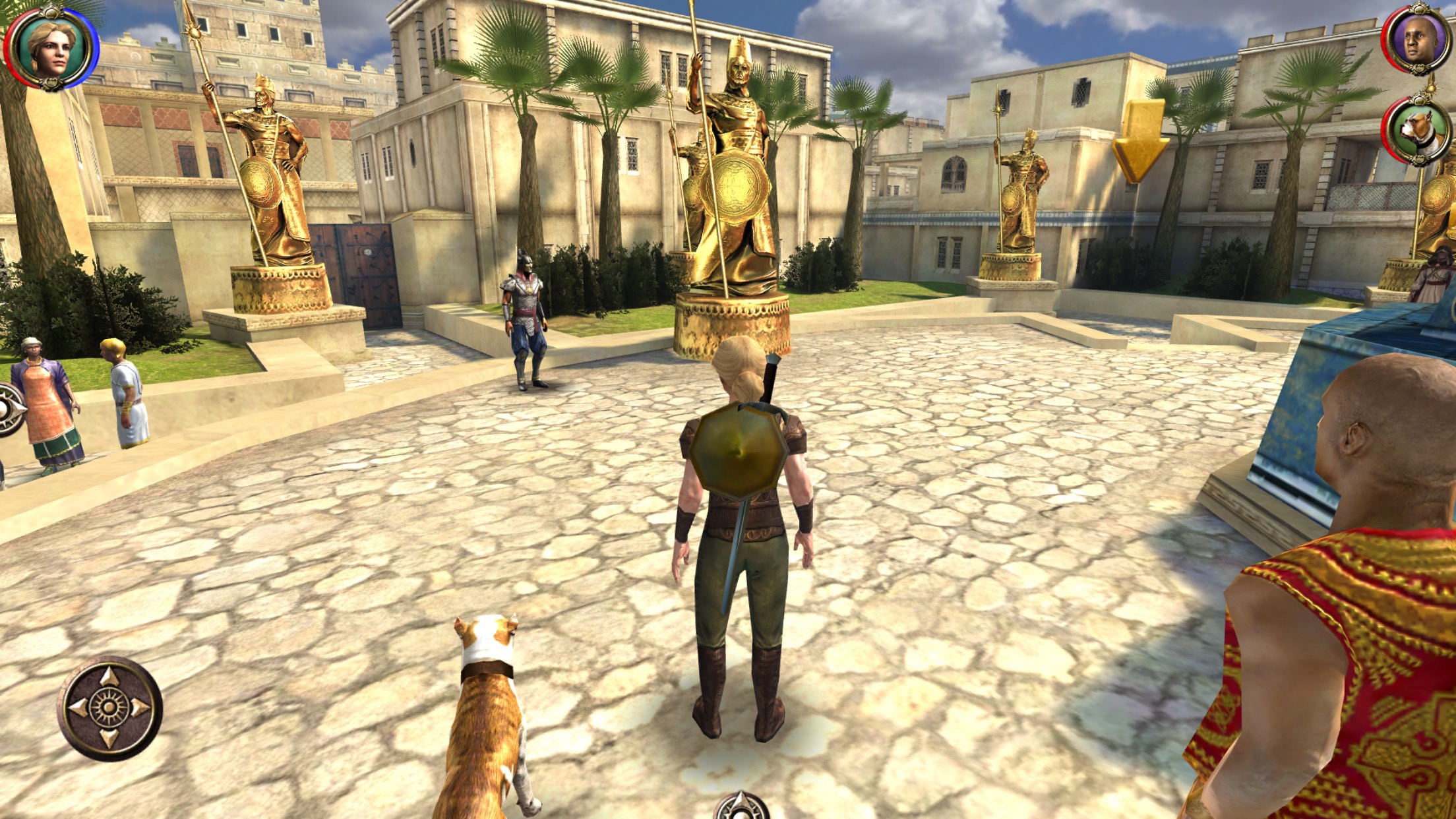 One of the interesting things about following the game industry over a long period of time is watching developers form, grow, then splinter out into various other developers, which in turn might find themselves growing and splintering out. Sometimes those developers do completely different things from the company they came out of, while in other cases, they follow more or less in the footsteps of their previous work. Ossian Studios, the developer of this week’s featured game The Shadow Sun ($0.99), has thus far fallen into the latter camp. Founded by a former Bioware employee, all of their releases so far have been RPGs with a very familiar flavor to them. The Shadow Sun was their first wholly original property, and also their first iOS game.

Ossian’s story starts with Alan Miranda. A former employee of Canadian RPG giant Bioware, Miranda served as an assistant producer on Baldur’s Gate 2: Throne Of Bhaal and Neverwinter Nights. Soon after the 2002 release of the latter, he decided to leave the company and start his own development team. Together with his wife, Elizabeth Starr, he founded Ossian Studios in Burnaby, British Columbia in 2003. The team included many members of the Neverwinter Nights mod community, so it’s perhaps little surprise that their first project was to be an official Premium Module for that game. Titled Darkness Over Daggerford, Ossian’s first effort offered up an enjoyable 25 hour romp in the classic Dungeons & Dragons style. Unfortunately for Ossian, Neverwinter‘s publisher Atari dismantled the Premium Module program a few months before Daggerford was to release. The module ended up being released for free in 2006 at the Neverwinter Vault, where it quickly broke records and earned high praise from the community. 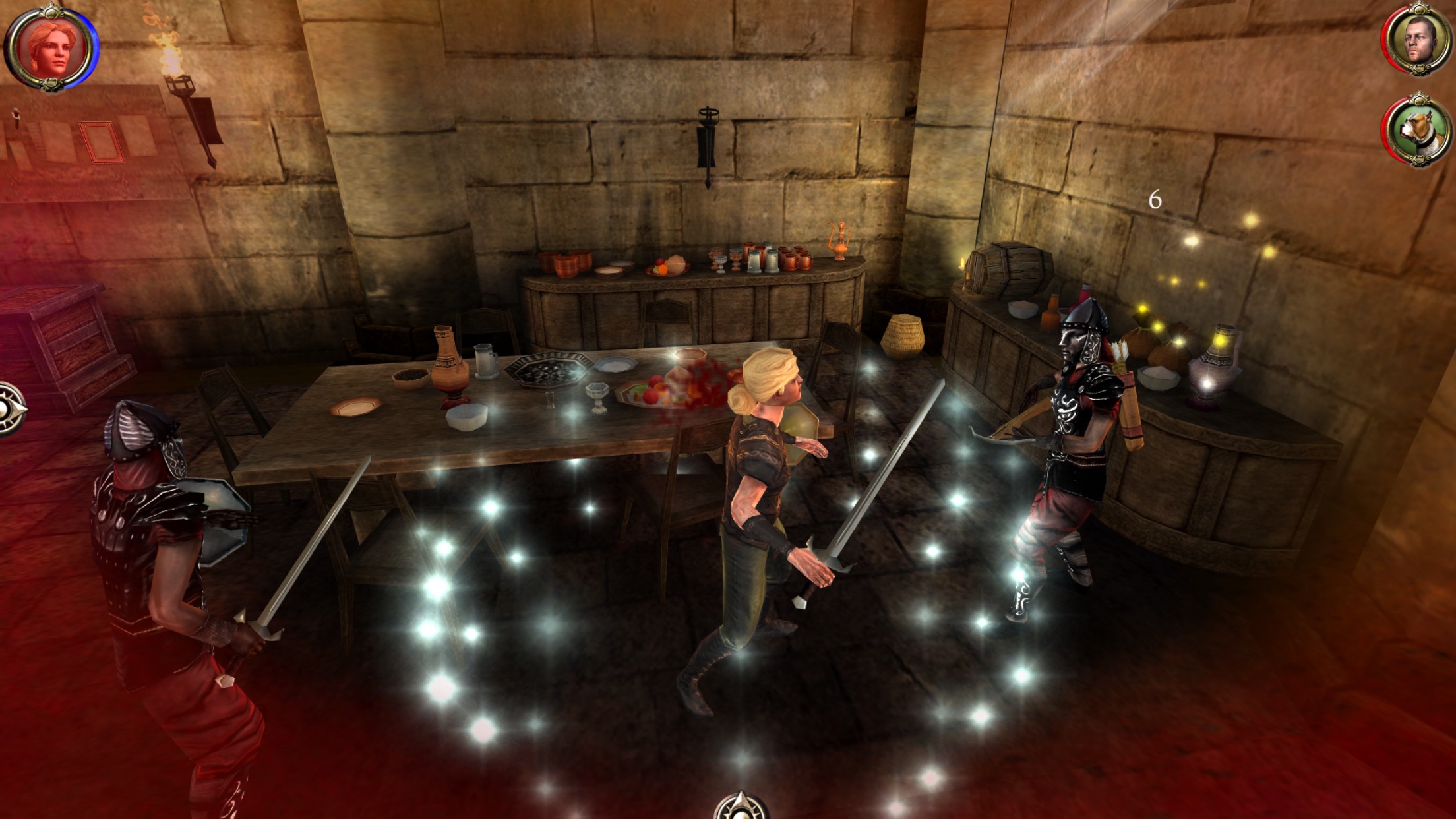 Now, you might think that Ossian would be once bitten, twice shy, but their very next project was a Premium Module for Neverwinter Nights 2, which had released only a couple of months after the launch of Darkness Over Daggerford. Titled Mysteries Of Westgate, it would also run into some unexpected challenges. The module itself was essentially complete in late 2007, but a combination of technical issues with the module’s planned DRM and communication difficulties between Ossian, Atari, and Neverwinter 2 developer Obsidian led to the game stewing for years. It was finally released in April of 2009, and while its reception wasn’t quite as warm as Daggerford‘s, it found a fairly eager audience. The exploration aspects earned a fair bit of praise, and certain elements of the plot went over quite well, too.

There isn’t a lot of information out there about this, but somewhere between the wrap-up of major development on Mysteries Of Westgate and its release, Ossian was tapped by CD Projekt to develop an expansion for the first installment in their series of games based on The Witcher. Unfortunately, the publisher hit some financial straits in 2009 and had to cancel that expansion, along with a couple of other planned projects. The expansion wasn’t even formally announced before it met its end, but development on the project was more than halfway complete. 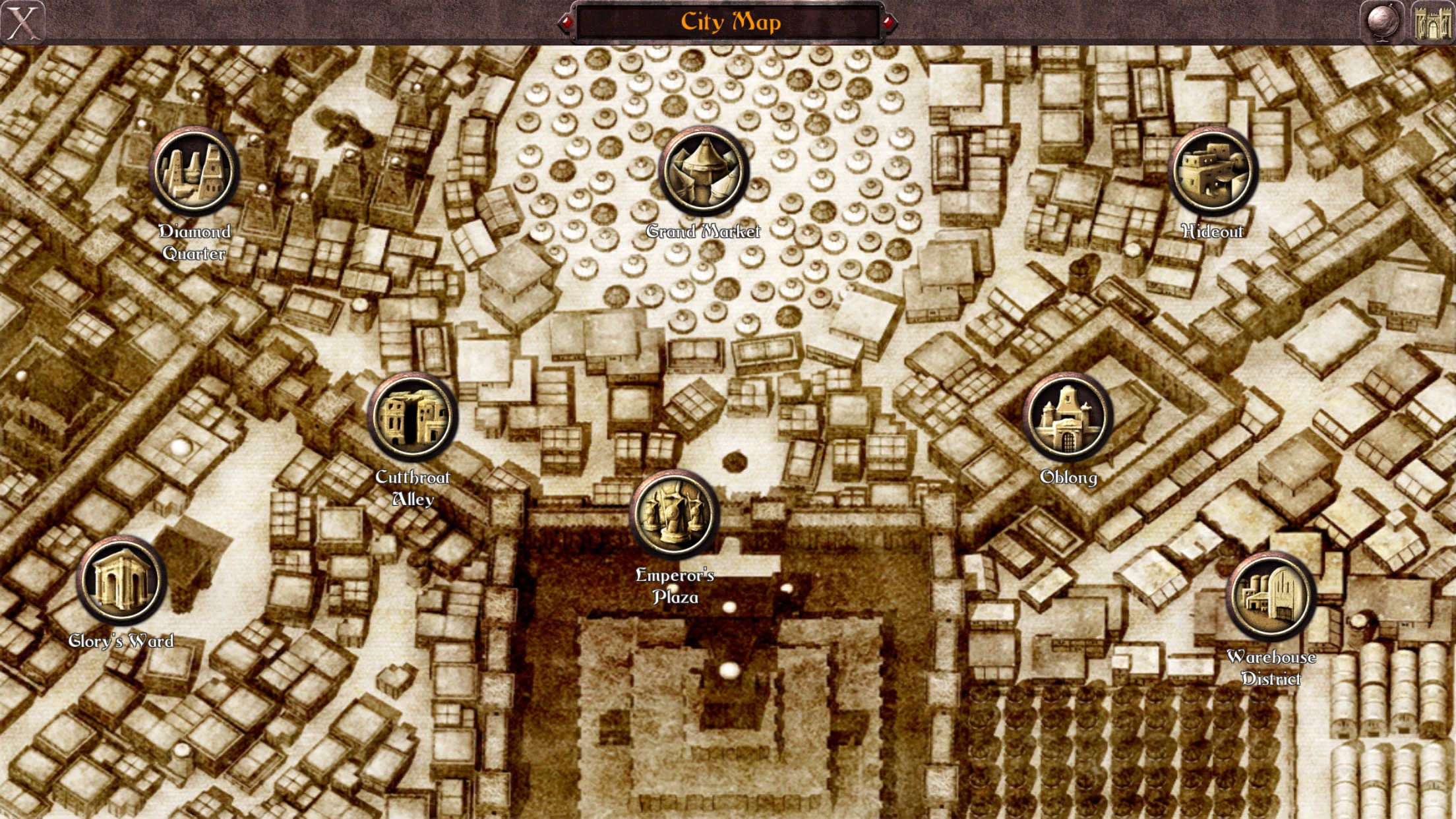 It’s likely that all of these issues contributed to Ossian’s decision to create their own property for their next project. The Shadow Sun was announced for iOS in August of 2010, with a release planned for later that year. The first screens of the game were made available in October of that year, and it certainly looked the part in terms of bringing a genuine computer RPG experience to mobile devices. Mobile RPG fans began to anticipate the game feverishly, and for a while, each week had players hoping The Shadow Sun would appear in that week’s release list. Eventually, it became apparent that the game wasn’t going to meet its projected 2010 release, but I’m not sure anyone could have guessed just how far it would slip.

The Shadow Sun next surfaced in May of 2013 with some new screenshots and a firm release date for that summer. Some readers were skeptical and, well, they were right to be. Though the game entered beta, summer went by with not much more than a few more screenshots and some assurances that the game would release soon. Finally, in November of 2013, a trailer for the game hit, and one month later, on December 19th, The Shadow Sun was at last available for players who had been waiting for more than three years. Although it didn’t make a big splash, the game earned some solid reviews across the board and generally pleased the iOS RPG audience. Unfortunately, the delays meant that the game looked a bit dated compared to games like Ravensword: Shadowlands ($6.99). It even ended up having to compete with the December 2013 iOS release of Baldur’s Gate 2 ($9.99), which includes the expansion Alan Miranda had himself helped produce while at Bioware. 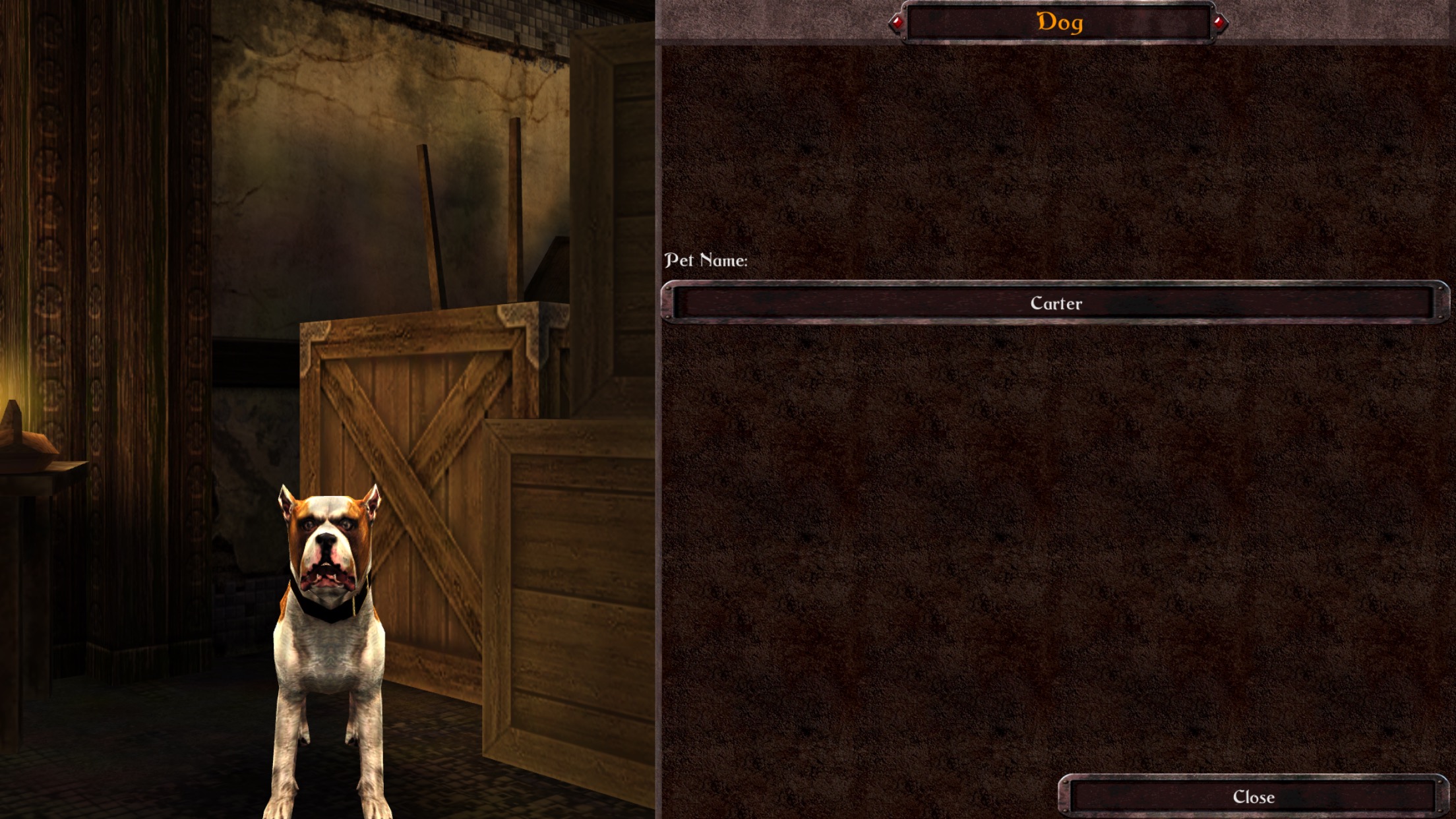 In spite of all of that, The Shadow Sun appears to have done well enough for itself. Ossian Studios is currently working on a new RPG, though they’re perhaps wisely avoiding any talk of a firm release date. They’ve separately indicated that there will be a follow-up to The Shadow Sun at some point, though it’s not clear if that will be their next game or not. In my opinion, it’s just great to see that the developer has survived what has clearly been a rather tumultuous history and is still quite dedicated to making new RPGs for those of us who can’t get enough.

The Shadow Sun certainly shows off the roots of the development team. It feels an awful lot like a Bioware game in a lot of ways, albeit less like Neverwinter Nights-era Bioware and more like the Dragon Age-era form of the company. You have interesting companions whose favor or ire can be earned by your actions, a fairly straightforward but versatile skill leveling system, a reasonably enjoyable action-based combat system, and a well-designed world that seems to have a life all of its own. Also similar to many Bioware games, this isn’t a truly open-world game. You use a map to fast travel from one area to the next. The areas can get reasonably large, however, and the dungeons are satisfying in terms of their layouts. 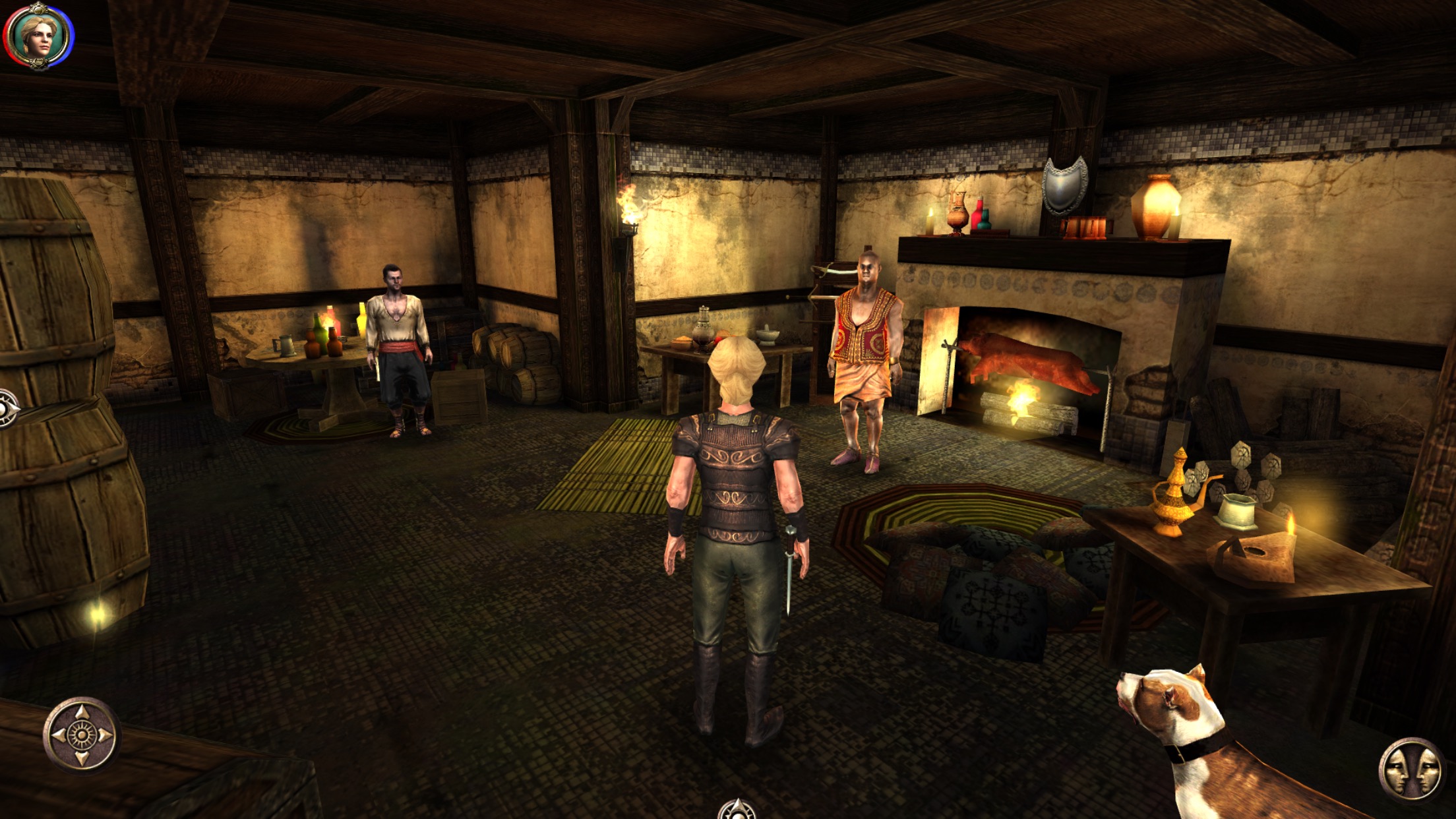 Of course, The Shadow Sun isn’t nearly as big or complex as the CRPGs it evokes. It takes around 10 hours to play through, making this Ossian’s shortest adventure yet. It’s a great 10 hours, at least, but it feels like it ends just as things are really getting cooking. The game’s brevity makes it ripe for replays, however, and with the variety of character builds, tactics, and conversation options on hand, The Shadow Sun is definitely an RPG worth taking for a second or third spin. It’s also relatively free of padding, which is a rarity even among mobile RPGs. There are plenty of side-quests to pursue, but it never feels like you’re just spinning your wheels waiting for something important to happen.

The biggest way The Shadow Sun distinguishes itself is in its wonderful setting. Ossian was trying to avoid the standard fantasy tropes of orcs and elves, and instead created a world that feels more inspired by Conan The Barbarian than it does Lord Of The Rings. I guess it says something about video games that a game that sticks to mostly humans feels so unique in the genre, but the setting of The Shadow Sun truly has a fresh feel to it. Just to give it an extra bit of spice, however, as the plot unfurls, it starts to feel like Lovecraft swung by for a little visit. While in most respects, The Shadow Sun is a competent yet somewhat ordinary RPG, its plot and world design keeps you coming back until the game is done, at which point you might well throw your mug to the ground and demand another. 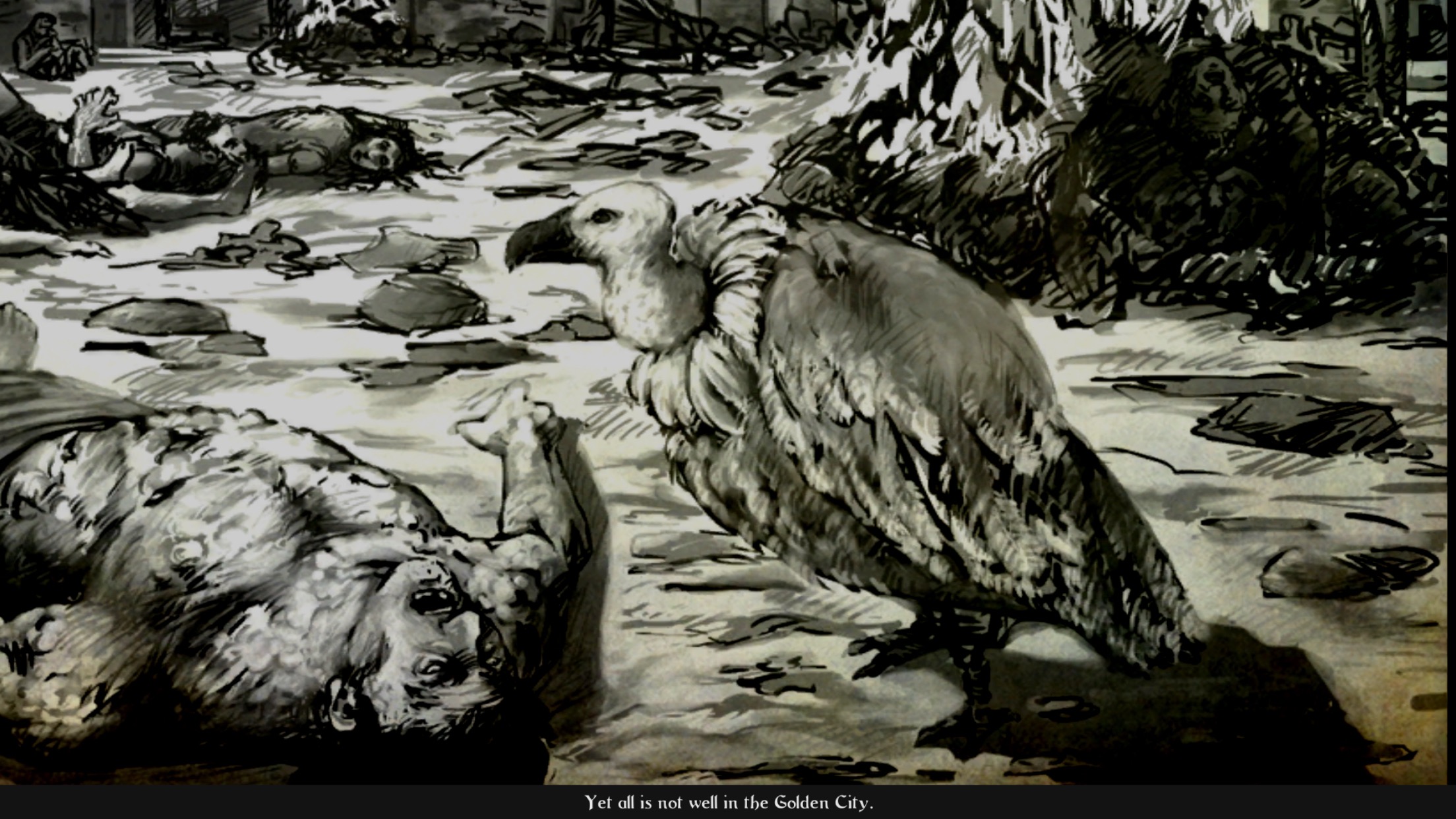 As the game is only a couple of years old at this point, it’s still holding up well. It received some criticism at the time of its release for its graphics looking a little dated, but that’s not the sort of thing we get too hung up on around in these retrospectives. I think it still looks fairly good relative to most other 3D RPGs on the platform, at least, and Ossian has done a great job of keeping it updated for new devices and screen sizes. The most recent update actually hit as I was playing the game for this article, so it’s safe to say the developer is still taking care of this game. Most of the updates have been bug fixes or compatibility updates, but there was one fairly significant post-launch content addition in the form of a dog companion. Well, if you’re only going to add one piece of new content, you might as well make it a cute pup. About the only thing I wish they would add at this point is iCloud save support. The app is quite hefty in size and it would be nice to be able to keep my saved game if I need to delete the game for whatever reason.

While The Shadow Sun certainly kept people waiting for a while, I think it ended up being a pretty important part of the iOS RPG library. It’s mobile-exclusive, lavishly-produced, and clearly created by experienced hands. Its setting would feel unique on any platform, but it feels even more so on iOS, where RPG settings clearly suffer from a lack of variety. In some ways, I wish it were a longer game, because I’d love to see what this team can do with a full-sized RPG after all these years, but I also appreciate that it’s an adventure I can romp through without a serious time commitment. Also, there’s a loyal pup. I sure hope there’s a dog in the sequel right from the start. 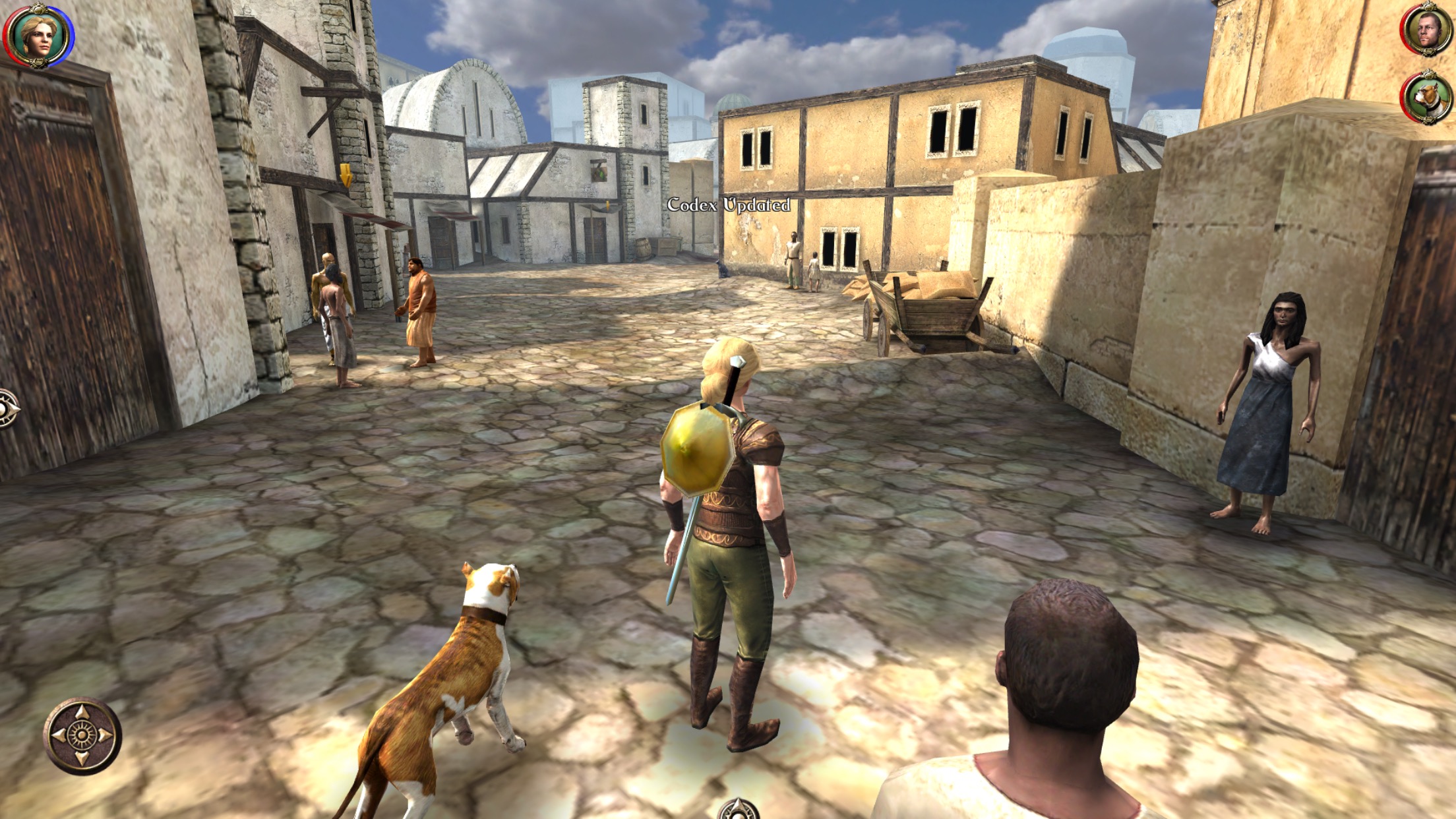 That’s just what I think of The Shadow Sun, though. What do you all think? Did you enjoy this game, or did it fail to live up to the hype? Would you prefer a longer game, or do you like shorter quests that can be replayed more easily? You can let me know by commenting below, posting in the Official RPG Reload Club thread, or by tweeting me at @RPGReload. As for me, I’ll be back next week with another RPG. Thanks for reading!