The Heroes Rise trilogy of gamebooks are, as near as I can tell, among the most popular releases from Choice Of Games. There are probably a lot of reasons for that, including the popularity of both superheroes and reality show send-ups, the interesting, convoluted plot, and the overall quality of the writing. Most of those things are still just as popular now as they were before, so even though the author of Heroes Rise has already started a new series set in another universe, it’s perhaps not that surprising that the Hero Project is coming back for a second season. That trilogy wrapped things up so well, however, that it’s hard to say what the best way forward would be for a follow-up. The Hero Project: Redemption Season ($3.99) finds a new direction, and while it’s a pretty good one, it’s tackling some complex issues that it can’t quite seem to get a proper handle on.

First of all, if you’re here for a fun tale of superhero action, you’ll probably want to pass. Redemption Season is about superheroes, yes, but it’s using the theme as a thin veil for discussing actual modern social issues. That kind of idea is not without precedent in the cape genre, of course. It’s more or less the foundation that X-Men is built on. Redemption Season throws a few superhero skirmishes into the mix, but the majority of your time and choices are focused on your character’s personal motivations and goals. As is often the case in a ChoiceScript game, you can determine your character’s gender, sexual orientation, and other details, but no matter what you choose, you’re always going to be playing a character who has the tough end of the social stick. 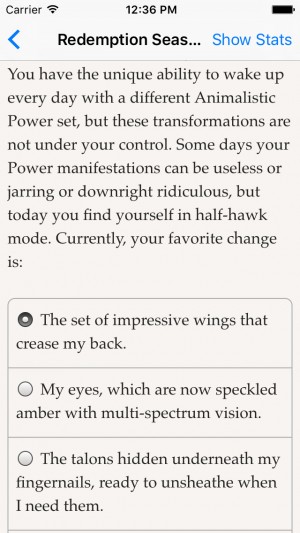 In this game’s world, there are lots of people with powers, but some kinds of powers are better than others. Your character is part of three different groups that are treated badly by society at large, all at once. You’re somehow given the chance to take part in the second season of The Hero Project, a reality show where the prize is a spot on one of the premier superhero teams. Your character is there for personal reasons, however. Your sister is unhealthy and the only way she can get treatment is through your success at the contest. In spite of the calamitous outcome of the previous season of the show, it remains extremely popular, so there’s a chance you can become a huge star if you play your cards right. One of the goals the game will try to push you towards is to use your unique status to raise awareness for the minority groups you belong to, but you can take that in a few different directions.

Redemption Season wants to talk about issues like inequality, intersectionality, and the disconnect between mind and body. If you try to make decisions independent of those topics, the game will start to browbeat you about it, either through conversations with other characters or, more awkwardly, by inserting it into your own character’s internal thoughts. Most of the characters come in two flavors. You’ve got characters who will clumsily monologue about their particular issue, and characters who will first pretend to be something else before finally giving a clumsy monologue about their particular issue. There are lots of characters, but you won’t really get to know much about most of them on a single playthrough. Not that there’s much to learn. This is very much a first chapter, so even the characters who get the most time and effort put into them end up a little thin. 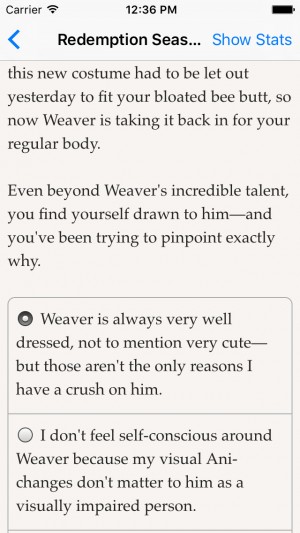 The weak characterization does a lot of damage to Redemption Season. While the main plot is fairly interesting and sets up a lot of threads for the planned sequel, it’s nearly choked out by the heavy-handed nature of its message. The main plot itself is wrapped up in themes of racism, so it’s certainly not out of the ordinary for it, and similar social problems, to be a frequent topic of discussion between the cast of characters. The problem is that none of these characters feels like a real person having a discussion about difficult issues. Instead, they feel like they’re preaching to an invisible choir that only they can see. Now, it should be noted that almost the entire story takes place in the reality show, where the characters are constantly being filmed. So it might be deliberate that everyone comes off as shallow, one-note creations spouting sound-bites, but intentional or not, it doesn’t make for very good reading.

That’s too bad, because Zachary Sergi has a good writing style. He’s really improved over the last few gamebooks he’s written, making Redemption Season a pleasant read in spite of its ham-fisted nature. He’s covered similar ground politically in earlier titles in more natural ways, and there are moments where he achieves the same here. The overall plot strikes a nice balance between establishing things for the follow-ups and giving the player a good, satisfying arc within this particular chapter. The high stakes of the life of the main character’s sister being on the line helps to add even more tension to points in the story where failure is a very real option, and I found myself weighing decisions a lot more carefully as a result. It’s not a very difficult game to clear, so long as you remember to be consistent, but it certainly felt like a lot was at risk.

As a superhero game light on superheroics and heavy on cultural discussions, The Hero Project: Redemption Season is already aiming at a particular niche. Unfortunately, the way it addresses the issues it brings up feels less like an exploration and more like a lecture. It’s blunt, awkward, and altogether lacking in immersion every time it tries to untangle these hard topics, and since they’re the focal point of the whole game, it ends up dragging down the whole experience. Perhaps even worse for a gamebook is that you feel railroaded by the kind of story and character the author seems to have intended, so that delicate illusion of choice is shattered. It’s fine that Redemption Season is less a game about superheroes and more a game about contemporary social issues, but it doesn’t handle either of those subjects with the sophistication or care they merit.