There are a few ways you can look at INKS. ($1.99), the latest release from Lumino City ($4.99) developer State Of Play. On the one hand, it’s a beautiful piece of interactive art, allowing each player to uniquely paint a design based on how they play. On the other hand, it’s probably State Of Play’s most conventional game yet, since it’s really just pinball at its core. That’s a genre which has no shortage of excellent entries on the iOS platform, and when compared on a strictly mechanical basis against them, INKS. is far from the front of the pack. You have to take it as a fusion of both of those things to see it on its best merits, I think. If nothing else, it will teach you more than a few things about how to play pinball, and it does it in quite the artistic fashion.

Rather than having you score-chase or try to complete a series of missions on a board, as in most other pinball games, INKS. gives you 72 stages, each with a slightly different design. Your goal on each table is to hit every colored target, at which point a hole will open up and the stage will be cleared. If you can do that in a set number of shots for that stage, you’ll earn a gold star. Take more than a couple of shots, and you’ll lose the star, but still get a nice gold medal. If you drain the ball, your grade will decrease for every ball lost. You never run out of balls, but after missing a few shots, the ball will become an inky black color that leaves dark trails behind it. As you progress through the levels, new obstacles will be introduced along with trickier table layouts, forcing you to shoot precisely if you want to earn top marks. The later levels take on a near-puzzle quality, forcing you to pay careful attention to every contour to find the paths you’ll need to send the ball along. 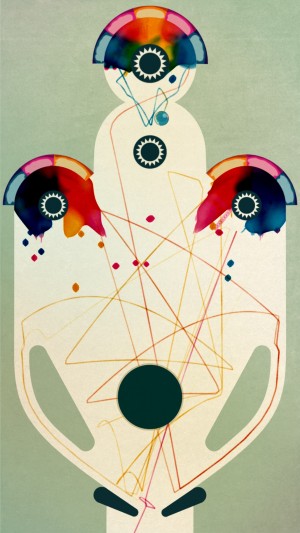 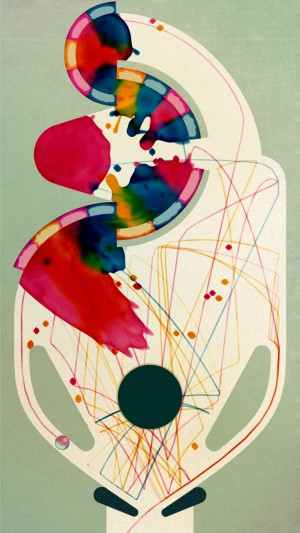 The main gimmick of the game is that when you hit the colored targets, paint will explode out of them. How big the splatter is depends on how hard you hit the target. If your ball passes through the splatter, it will pick up some of the paint and leave colored trails behind it for a while. By the time you’ve finished some of the more complex boards, you’ll have something quite reminiscent of a Jackson Pollock drip painting. This is not only nice to look at, but also serves a practical purpose. Those little trails your ball leaves behind are a nice reminder of exactly where the ball will go if you hit it with your flippers in the same spot. It’s nice way of making order out of the chaos that pinball sometimes takes the appearance of.

If INKS. is a pinball trainer, it’s a pretty good one. Some of the tables are quite devious, but once you understand the tricks to them, you’ll wonder how you ever missed. Many of these tricks are the basic tools of the trade for hardcore pinball fans, and as such, those players might find INKS. to feel like one long tutorial for mechanics they already know very well. Now, if you’re the sort of person who plays pinball by hammering away at the flippers anytime the ball gets near them, you’re going to pick up a lot in this game, and you’ll likely have a really good time doing it. Later levels should stump beginners and hardcore alike with their intricate designs and narrow paths to success. The physics can’t hold a candle to apps like Pinball Arcade ($0.99), and I had the ball glitch right through the flipper a few times, but in general, it’s reliable enough that most people won’t notice any major issues. 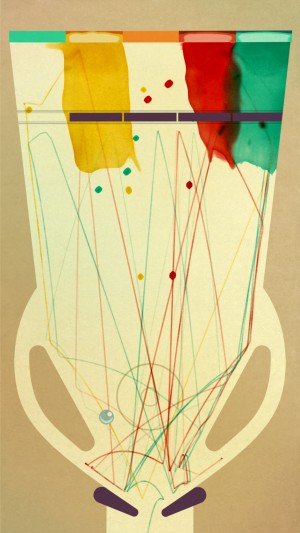 INKS. leans heavily on its presentation to differentiate itself. Fortunately, State Of Play has done their usual fantastic job of combining clean, attractive visuals with well-placed audio effects. There isn’t any music to speak of, but as you hit the various targets and bumpers around each board, various notes will sound, creating a pleasant melody. The UI is also up to the developer’s usual standards, with a minimalist look that still manages to be quite clear. The cost of those pretty visual effects comes in how quickly the game will chew through your battery. This is another one of those games that makes your phone double as a hand-warmer while you’re playing it.

The base game includes three packs of 24 levels each, for a total of 72. There are also two additional IAP level packs of 24 stages each available for $0.99. On top of those level packs, there are also credits you can buy in various denominations. Those credits are used to buy power-ups, and apart from 100 credits the game gives you initially, there’s no way to earn them in-game. Those power-ups include a stopper that should keep your ball from draining between the flippers, and a slow-motion ball that can help you make tricky shots. Neither of these power-ups is necessary for clearing any of the stages, though they will help you earn some of the game’s achievements if you’re having issues. Both of the level packs are excellent and certainly worth a purchase if you’ve enjoyed the included content.

INKS. is a clever spin on one of the oldest concepts in electronic gaming. Much of the cleverness is admittedly tied up in the visuals, but it is interesting to play a pinball game where you aren’t trying to rack up a high score, I suppose. The level designs are superb, particularly if you’re playing for the par score. You know clearing the board is possible in that many shots, so you really have to scratch your head and think about how you can do it. Hardcore pinball fans might balk at the physics and how much of the game is tied up in teaching you rudimentary techniques, but I think outside of that group, most will find INKS. to be an eye-catching, challenging take on a familiar genre.