I’ve played so many runners in the past 10 years or so I’ve lost count. Much like my teenage years after I realized that I had played hundreds of platformers in my lifetime, over time, I started to notice that you can’t really browse the App Store without seeing a runner front and center. While many groan at the prospect, I relish a new opportunity to check out a new entry, and a brand new way to spend entire days wasting away behind the comfort of a touchscreen.

The space is filled with a ton of classics, and is steadily forging a new playstyle that’s conducive to touch controls. Whereas many thought that some of these games weren’t previously possible, clever developers have fine-tuned devices so that they’re not only easy to pickup, but tough to master. That basically describes Chameleon Run ($1.99) to a tee. 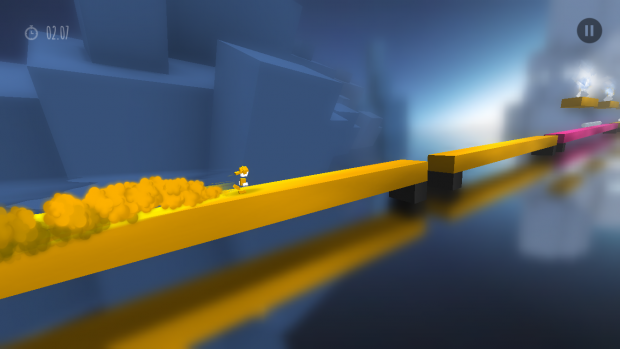 Based on one simple concept — swapping colors — Chameleon Run succeeds at sucking you in at minute one. The gist is that at the start, players are presented with two colors, yellow and purple, with the option to swap between them at will. Touching an opposite color will end your turn, so it’s your job to swap constantly to accommodate. To do this, you’ll tap one side of the screen to swap, and the other to jump — told you it was simple!

It’s crazy just how fast you can swap if you’re quick enough, as each touch will instantly switch colors — a useful mechanic for when you forget to swap at the very last moment. After some practice it’ll be a second nature, and swapping back and forth will allow you to conquer every obstacle thrown at you. Well, just about everything, as you still need to dodge blocks devoid of color, which will end your run regardless of your current color choice. A double-jump mechanic also complicates things, which comes in handy during some of the tougher stages where you really have to thread your character through a fine needle. 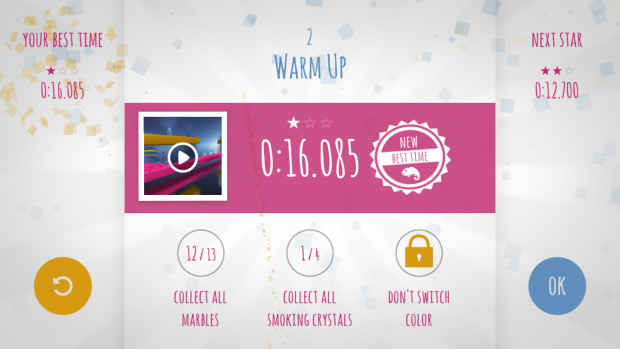 It’s never dull, mostly because of how much the theme of color permeates through the entire presentation. Your runner gushes a trail of it (which has a nice cartoon-like effect), the environments are full of life, and the colors themselves are easy to identify, even from far away. I was also impressed with the nature of some of the hazards, which have a nice 2.5D feel to them, and it looks even better in motion once you start working your way into some of the later challenges. UI-wise Chameleon Run is top notch, and the nice effect of having the game slightly pause after returning from the menu is appreciated. The soundtrack could definitely be better as it’s mostly generic electronic fare, but it fits the game and gets the job done.

Note that I never used the term “endless" anywhere here, because it’s definitely not. It’s a level-based adventure where each stage has a clear beginning and an end, which is a rad departure from the ever-increasing endless IAP cycle. Oh, about IAP — it’s not in at all, and $1.99 gets you the whole enchilada. That also includes challenges (some of which involve grabbing all of the collectibles, or avoiding color swaps altogether) and leaderboards. Completing said challenges will grant you Chameleon tokens, which can in turn be used to unlock new levels. The game could definitely stand to be a little longer though, as I was done with the core stages in just a few hours, and 100%-ing everything will likely only last most players a few more.

Chameleon Run pretty much grabbed me from the very first screenshot, much less my first play session, and I never looked back (which is apt, as your character can’t look back either). It’s fast, fun, and the touch controls are a dream. I wish it had a bit more variety in terms of its level themes, but the whimsical visuals will push you through even if you start to see things blend together during marathon sessions.