Foursaken Media are known for blending different genres together in interesting ways, it’s pretty much their thing. But when they first announced they were mashing a turret shooter together with a clicker, I was skeptical. It just sounded too strange. Then they clarified that it was the game’s progression system that was modeled after those in clickers and other “idle" games, and that instead of clicking you’d be blasting the crap out of wave upon wave of increasingly difficult enemies. Thus War Tortoise (Free) was born, and as strange as it sounded it’s a wonderful combination and one of the more interesting types of games to hit mobile in a while. 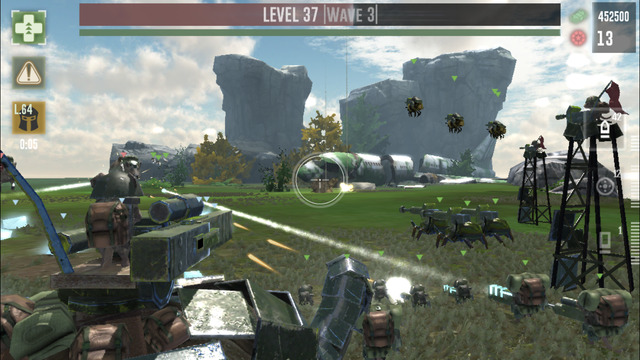 It really couldn’t be simpler to play War Tortoise. You drag around the screen to move an aiming reticule, and when you target an enemy your chosen weapon fires automatically. This game really isn’t about being a skilled shooter, and instead the strategy comes in the form of how and when you upgrade your various weapons and abilities, as well as how you go about taking out each wave of enemies, which can get impressively huge. This is a really fun game to watch in motion.

Your goal is to take out as many waves of enemies as possible before inevitably being overwhelmed by them as they increase in difficulty. That’s when you prestige, zeroing out all your upgrade progress back to zero while retaining some key features that allow you to advance your abilities even faster the next time around. You’re then equipped to make it a little bit farther and do a little bit better than you did before, until you eventually get overwhelmed and start the process over again. It’s just like a clicker!

This is an enjoyable loop just based off the warm fuzzies you get from watching levels go up, but blasting tons of enemies in War Tortoise is also enjoyable in and of itself. It straddles the line between an idle game you don’t really have to pay attention to and something with more substance. It retains the pick-up-and-play factor that makes for the best mobile games, but gives you something more meaningful to do than click or just stare at the screen. War Tortoise is a totally odd mashup that ends up working really well. Time will tell if its free to play balance is on point and if it has long-term lasting appeal, but for free you should definitely check it out as it’s an interesting animal for sure.