Hello, gentle readers, and welcome to the RPG Reload, the weekly feature where you can’t have a boat until you get yourself a map. Each week, we take a look at an RPG from an older time to see how it’s doing in the modern day. It’s a chance to revisit old favorites, dig up forgotten titles, or just take a deeper dive than our reviews typically allow for. As the fated hero’s second cousin (twice removed), I try to choose a balanced plate of RPGs from week to week that properly represent the diversity of the genre. If you feel like I’m missing out on something good, though, make sure to speak up. You can give me suggestions by commenting below, posting in the Official RPG Reload Club thread, or by tweeting me at @RPGReload. The schedule is done up months in advance, so I can’t promise you’ll see your suggestion soon, but I will add it to the list.

In our nearly two years of running this feature, we’ve looked at a few games that appeared to be more directly inspired by Enix’s Dragon Quest ($2.99) than usual. It makes sense, as that game served to establish the JRPG genre as we know it. Even though the series is significantly more popular in Japan than the rest of the world, any North American game developer who grew up in the 8-bit Nintendo era most likely owned a copy of the first Dragon Quest, or if they didn’t, certainly knew someone who did. After all, Nintendo all but gave away hundreds of thousands of copies after it failed to sell to their expectations.

So with that in mind, it’s not all that rare to see games like Dragon Fantasy ($7.99) or Guardian Saga ($0.99) pop up. That said, both of those games are made by developers from outside of Japan, and in both cases, it shows. As much as Dragon Fantasy borrows from Dragon Quest, it also draws from other JRPGs that are more well-known internationally. Guardian Saga, meanwhile, is extremely similar to Dragon Quest, but tellingly, it’s the first game in the series that it chooses to ape. 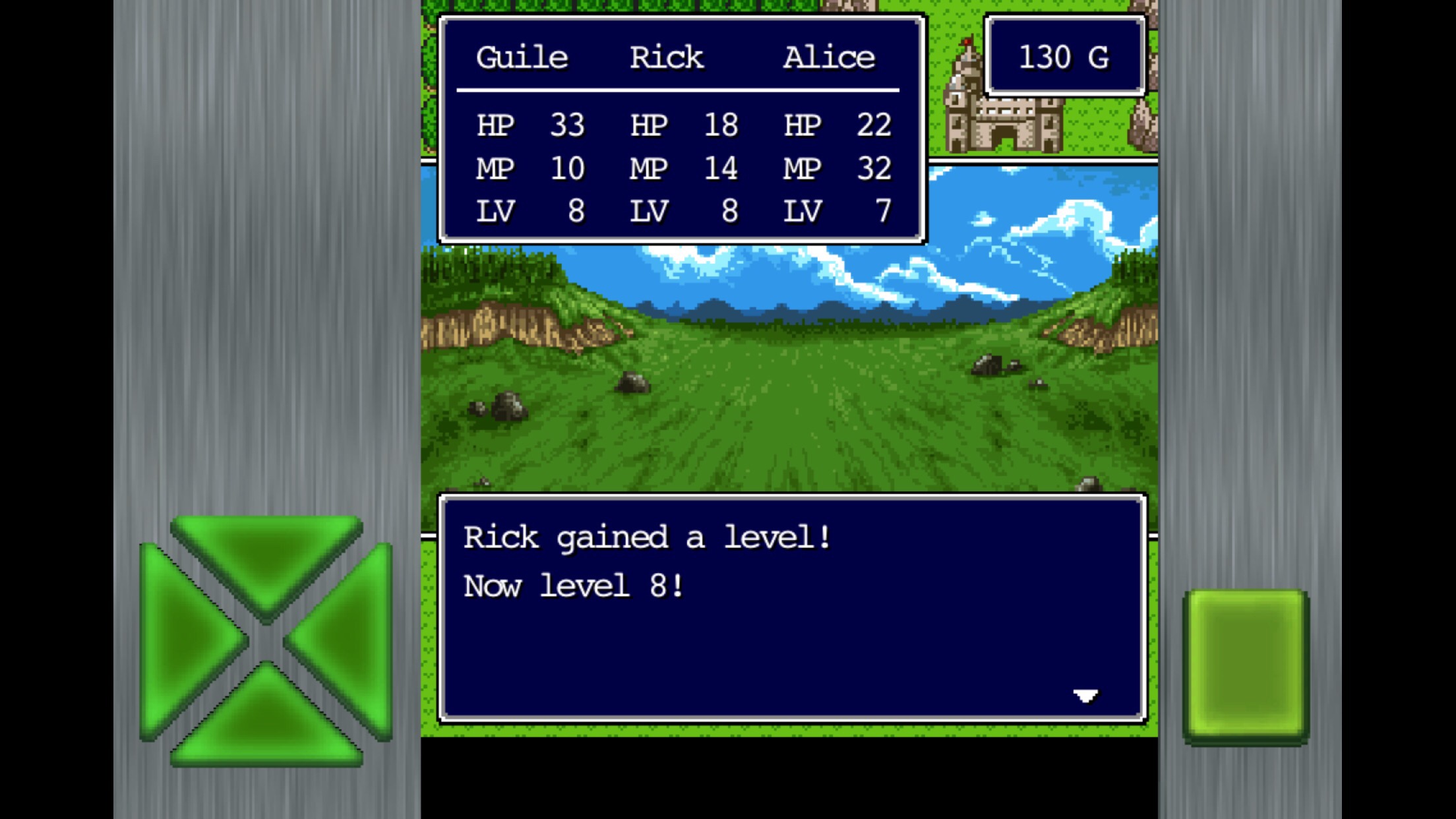 Looking at the output of the now grown-up 8-bit generation in Japan, we see a different picture. For one thing, there are a lot more Dragon Quest clones. But I think it’s also interesting which Dragon Quest they choose to homage. The first Dragon Quest might have some nostalgic appeal for that generation, but it sits in a different position from what it occupies in other countries. For Americans, the series was never bigger or more famous than with that first game. For Japan, on the other hand, the series hit its peak relevance over the course of the next few games. So when it comes time for Japanese developers to pay their respects to Dragon Quest, they usually draw from Dragon Quest 2 ($4.99) or Dragon Quest 3 ($9.99). And at least among independent developers, many aren’t shy about copying the look and mechanics of those games almost wholesale.

That brings us to this week’s featured game, Gailardia (Free). While it seems to be relatively unknown in English mobile gaming circles, Gailardia has served as the staple franchise of Japanese mobile developer MocoGame for many years now. In fact, I’m quite sure that at this point, there are more Gailardia games than there are Dragon Quests. That Dragon Quest has come to mobile in a big way over the last few years hasn’t slowed down the releases any, either. The latest game in the Gailardia series came out in Japan late last year, and I imagine there will be more to come. 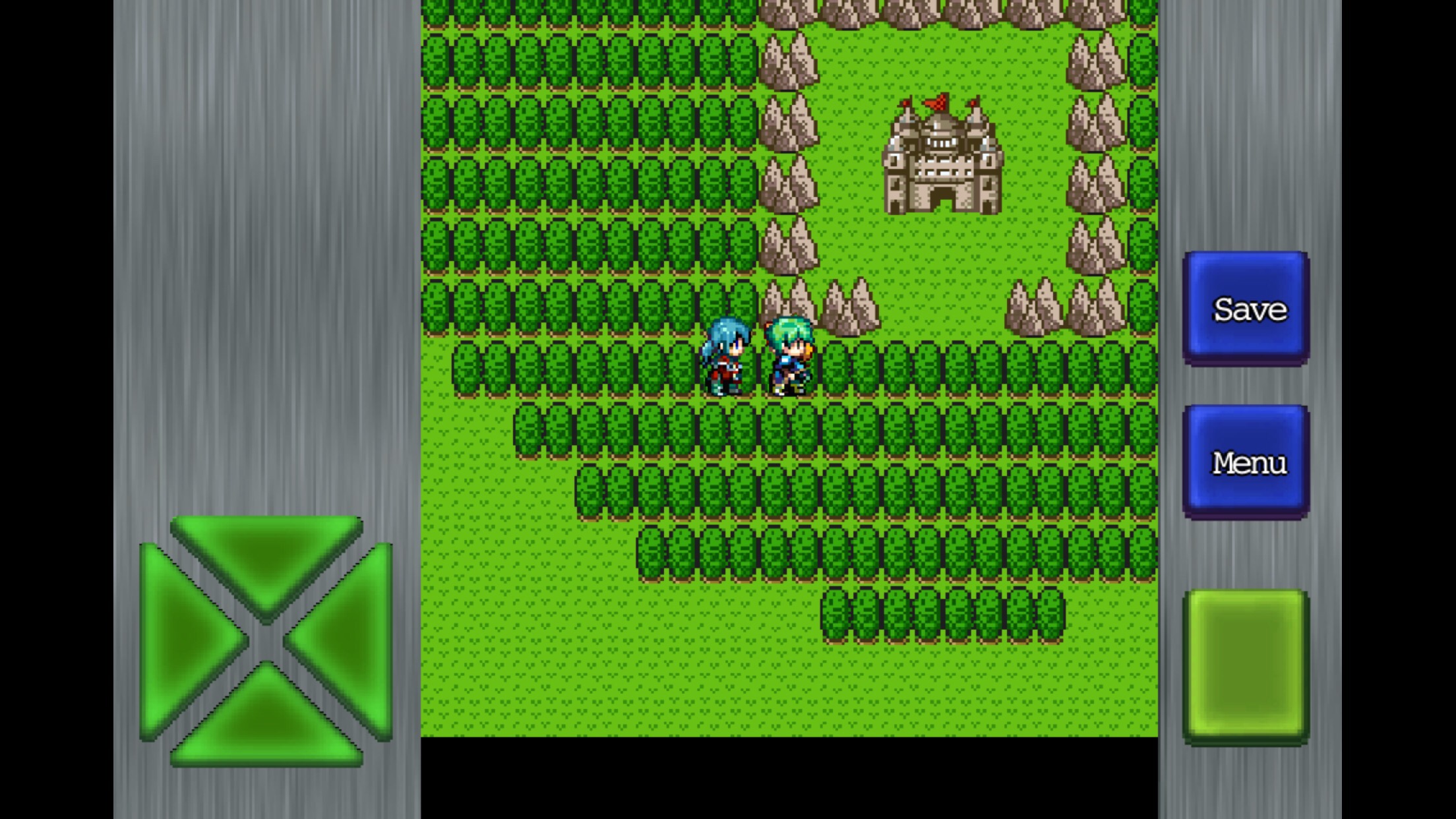 Only the first three ever saw English releases, however, and it seems unlikely that will change. The world outside of Japan has a somewhat fickle relationship with Dragon Quest itself at the best of times, let alone any of its clones. Gailardia in particular appears to have gone almost completely unnoticed by a crowd that is usually fairly good at picking up on games like this. A search on TouchArcade shows only a single lonely thread in the forums, and literally the first time the word Gailardia appeared on a front-page article was when I listed it as the next Reload last week.

In some ways, I can see how that happened. If I was pressed to describe Gailardia in a word it would probably be ‘unremarkable’. Unlike most other Dragon Quest-inspired games, Gailardia has no interest in changing any of the mechanics, telling a richer story, or anything along those lines. The combat mechanics are almost identical to those found in Dragon Quest 2, the spells are all Dragon Quest proxies, the general gameplay progression is the same, and even its line-up of monsters are suspiciously similar to those found in Enix’s game. The similarities go all the way down to the menus, which directly bite off of Dragon Quest‘s distinct style. That unfortunately also extends to the pacing of the first couple of Dragon Quest games. There’s a lot of grinding necessary in Gailardia, both for experience points and gold. 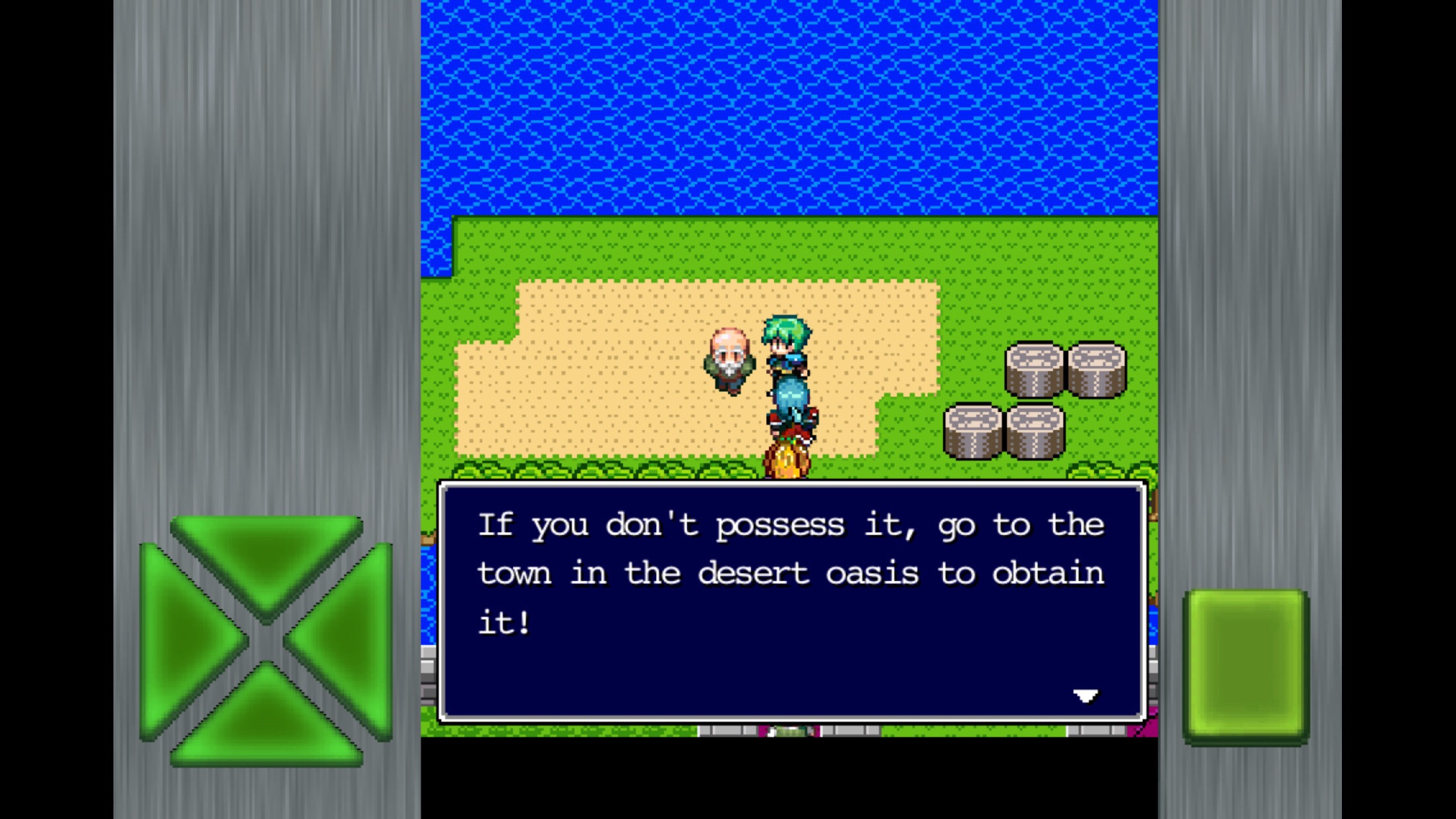 Of course, Gailardia isn’t nearly as lengthy or well-designed as the later NES Dragon Quest games, but for what it is, it’s more than solid enough. You’ll start the game with your whole party already in tow, a roster that includes the main character Guile and his companions Rick and Alice. They’re the heroes fated to save the world from the Demon King, and following in the footsteps of Dragon Quest 2, you’ve got one pure physical fighter, one mage, and one hybrid of the two to work with. The world map is shaped somewhat like a horseshoe, and you’ve got to work your way from one end to the other, fight through dungeons, battle demons, find a ship, explore the remaining islands, and get the keys you need to open your way to the last dungeon. There’s an optional boss and some special stones to collect along the way, but that’s about the sum of it.

Each new area you venture into will throw progressively more difficult monsters at you. It’s not always clear where the dividing line is between sets of monsters, but you can save any time and the penalty for death is as light as it is in Dragon Quest. You don’t lose any experience points or items you may have gathered, but half of your gold is taken away. That can be really painful in Gailardia because you’ll need quite a bit of scratch to get the gear you will need to survive, but it beats getting kicked to the proverbial title screen. So, like in the classics, you get to a new area, fight battles until you’ve gained enough levels and equipped yourself with the proper gear to easily survive, then move to the next location. You’ll eventually earn some spells that allow you to fast travel, but I don’t recommend using them unless you have to, because you’re going to need to grind anyway. 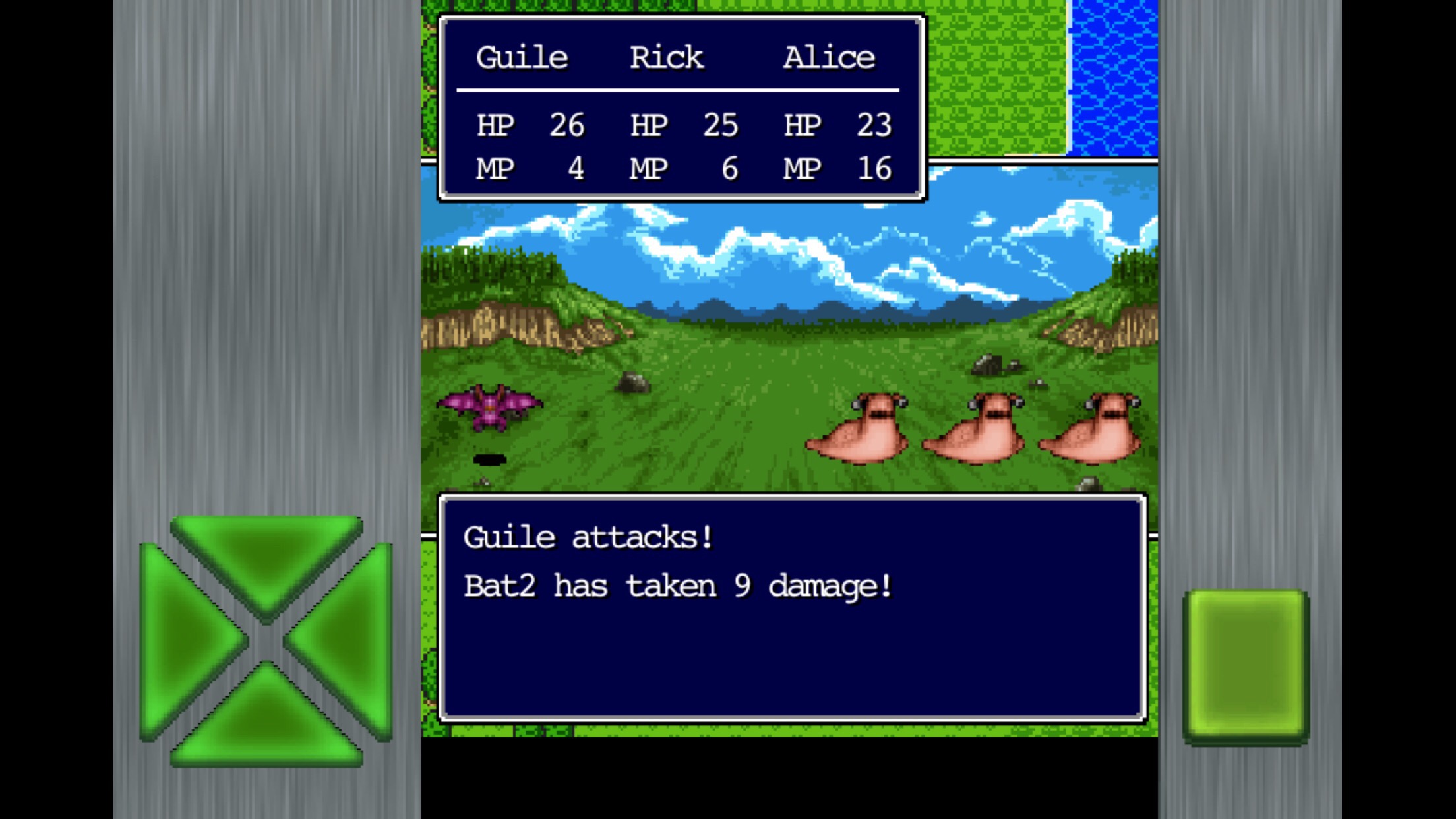 However unremarkable it may be, Gailardia does a fairly good job of approximating the Dragon Quest experience of the 8-bit era. For all the games that released on the App Store that were clearly inspired by Dragon Quest, none of them really had quite the same feeling. Gailardia manages to pull it off, even if the result is basically the most ordinary Dragon Quest game you could imagine. The fact that it came out on smartphones around three years ahead of any of the Dragon Quest games was all the cracked door it needed to wedge its foot in nicely. It’s worth pointing out that Gailardia isn’t the only time MocoGame has taken advantage of an absentee favorite. They also have a couple of dead ringers for Advance Wars, a Flappy Bird clone or three, a Picross game, and a few Doodle Jump knock-offs, among many others. Even humble old Minesweeper hasn’t escaped their notice. The Gailardia games seem by far to have the most effort put into them, though, which makes me think MocoGame’s wallet and heart are in two different places.

So why shine a light on such a blatant clone? Well, for a few reasons. First and foremost is that it’s a fairly well-made clone, and a free one at that. There’s no IAP in here, no monetization of any kind, so MocoGame certainly isn’t profiting from this particular game anymore. But I think it also serves as a rare English example of something you can’t normally see without diving into a retro game store in Japan. Gailardia might seem egregious in its copying, and some would say it’s typical of the App Store. I wouldn’t completely disagree. But riffing off of Dragon Quest is a pursuit that predates smartphones by a good decade or two, and the evidence of it can be found in the piles of cheap toss-away Famicom and Super Famicom RPGs you can find filling the bins of second-hand stores in Japan. 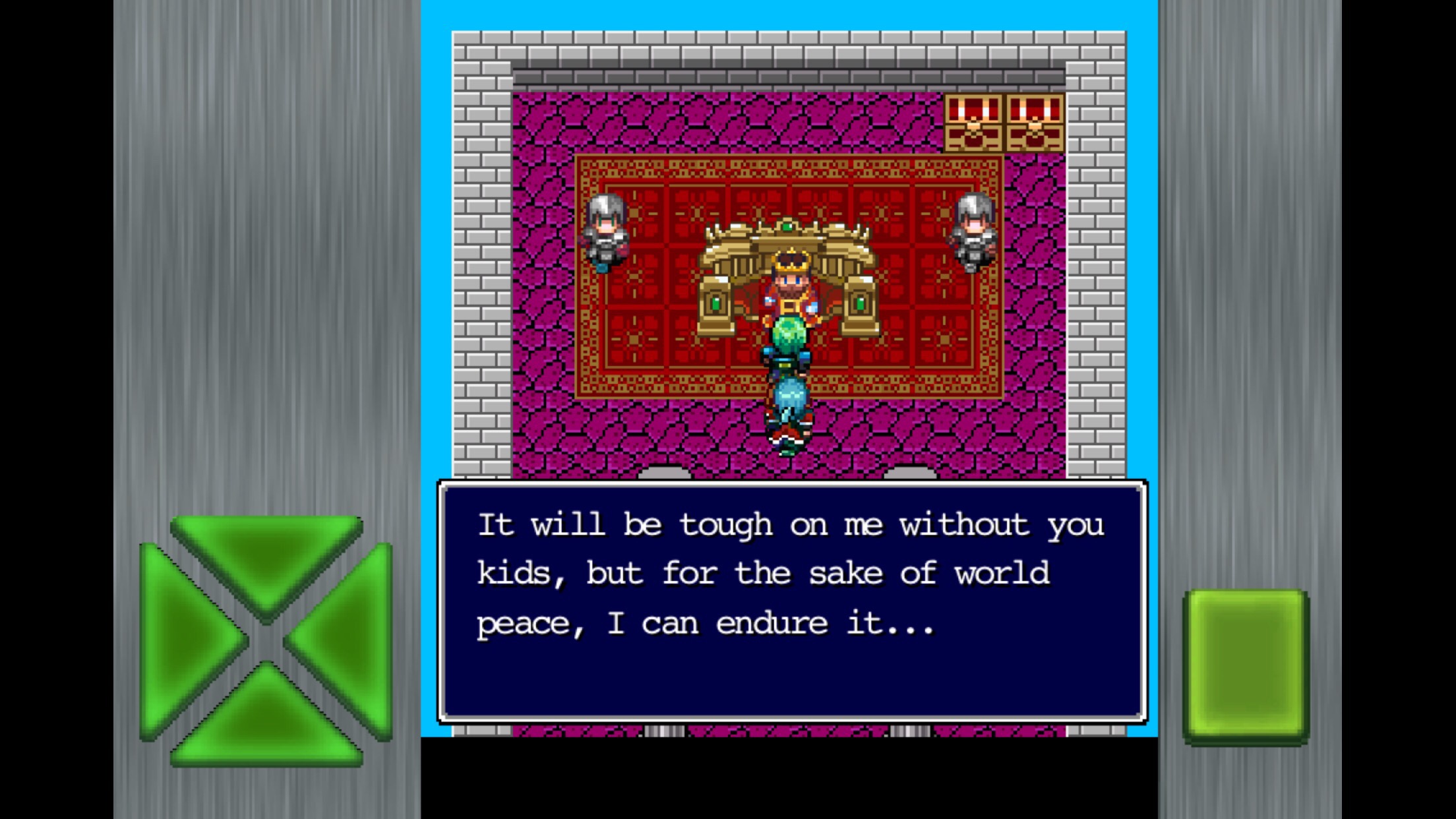 Most of these full-priced games, many published by major third parties, were no more creative in their imitations than Gailardia. At best, you might see the medieval theme swapped out for robots or samurai, but even that was a relatively rare occurrence. Since console RPGs didn’t take off outside of Japan until a couple of hardware generations later, we didn’t see many of these kinds of games in North America. Gailardia gives you a window into what it might have been like to shop at a Japanese game store in the height of the 8-bit era. Dragon Quest, Dragon Quest as far as the eye can see. But hey, at least we got Final Fantasy ($7.99) out of it, right?

So while I’m not the biggest fan of straight cloning, I think I’d still recommend giving Gailardia a try. It’s pretty fun in a grindy sort of way, though make sure you save compulsively because it doesn’t support multitasking. The app hasn’t been updated since a few months after its April 2011 release, so it’s missing a lot of the things we take for granted in iOS games today. That said, it still works just fine on modern hardware and iOS 9. If you feel too guilty about playing it, just make sure to buy a Dragon Quest game after. It’s win-win! Your guilt will be assuaged and you’ll have a new Dragon Quest to play. 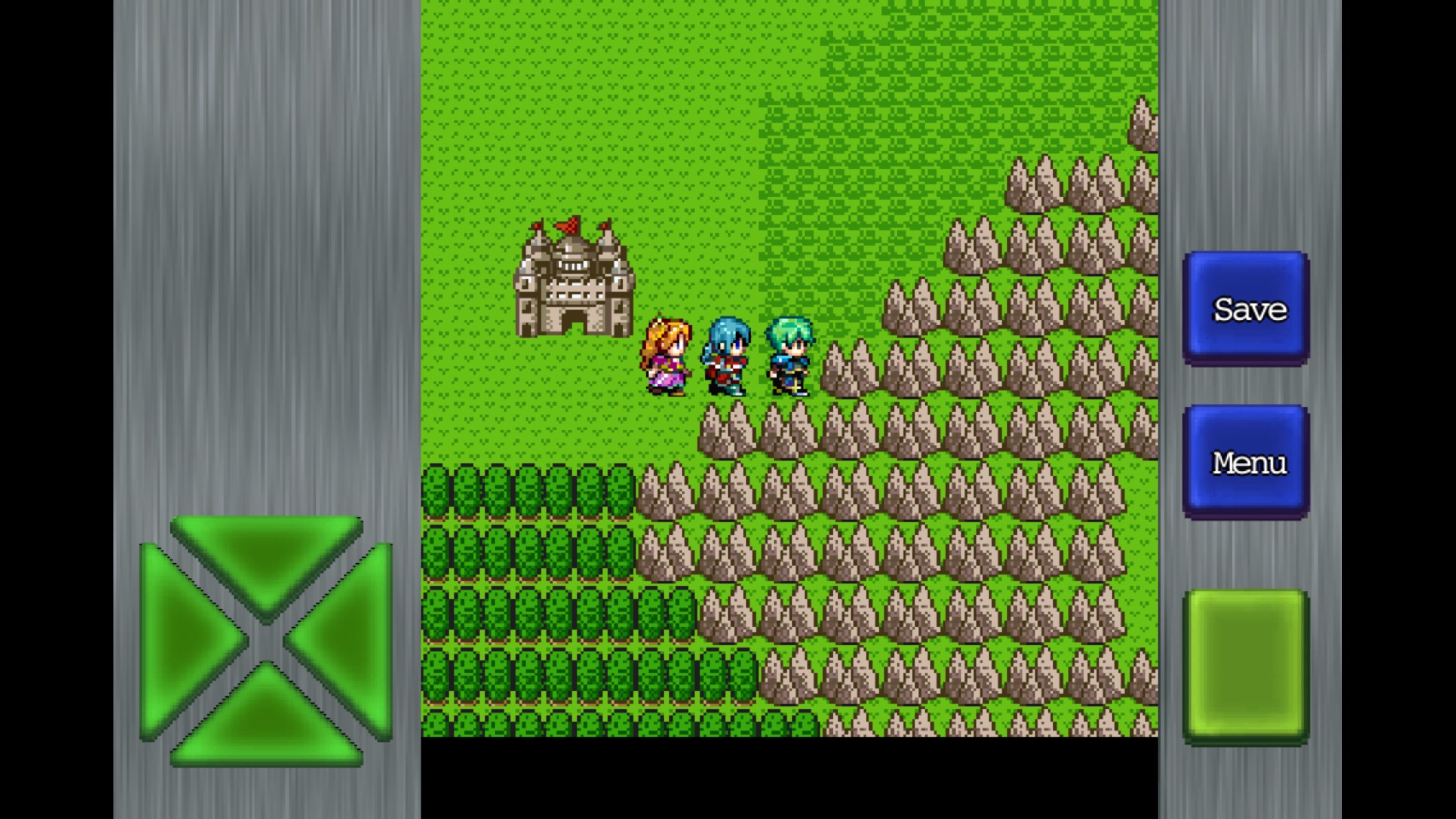 That’s just my take on Gailardia, though. What do you all think? I want to know, so share your feelings down below in the comments, drop by the Official RPG Reload Club thread, or tweet me at @RPGReload. As for me, I’ll be back next week with our second Crescent Moon-published RPG of the month. See you then, and thanks for reading!