I’ve got to be honest: I’ve had just about enough with “Crossy-likes". Yes, Crossy Road was groundbreaking in the way it took a familiar gameplay concept and rejiggered it for mobile play, but the deluge of similar games to come in its wake has me pretty burnt out. Which is unfortunate for a game like Looty Dungeon (Free), as before its release this week I was certainly interested in checking it out but I wasn’t really expecting much. Basically Crossy Road with a dungeon crawler theme. Boy was I ever glad to be so wrong. 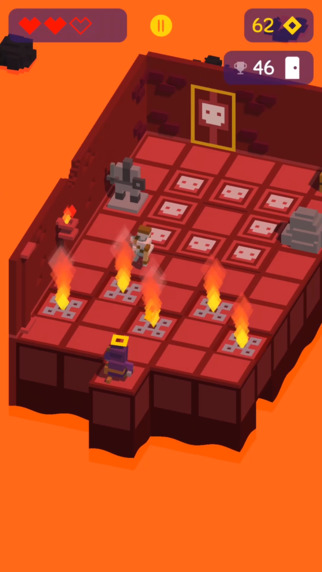 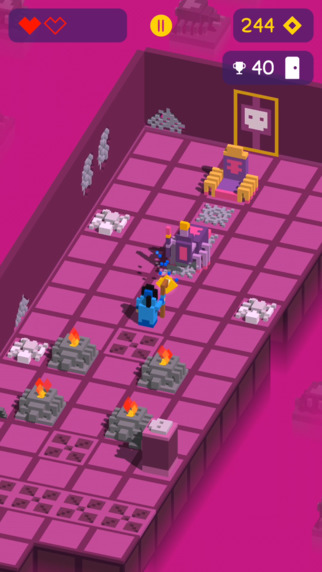 Looty Dungeon looks like Crossy Road on the surface, but it’s honestly more of a dungeon crawler first with a Crossy Road visual style and control system. You still tap to move forward block by block, or swipe left, right, or down to move in those directions. And while it’s still a “see how far you can get" kind of game, it feels much more meaningful than a simple endless arcade game as there’s a variety of things going on as you progress through Looty Dungeon.

First and foremost are the game’s extensive cast of characters. These aren’t simply cosmetically different characters, but each of them has some sort of unique ability which affects how you play the game. For instance, the knight character can attack enemies with his sword, but you can also hold down on the screen to bring up his shield and block things like arrows flying at you. The archer on the other hand has a ranged attack which he can shoot up to two squares in any direction. Or there’s a centaur who can attack both forward and backwards at the same time. The list goes on, and one of the best parts of Looty Dungeon is unlocking and discovering how each of these characters plays.

The next thing that sticks out to me about the game is its mission system. Beyond fighting through as many rooms as you can, there are also various additional missions to accomplish while you play that rotate out several times a day. It’s fun to have these extra goals to shoot for, some of which are quite challenging. They also reward you with coins galore, making it easier to unlock more and more characters.

I could go on, as there’s lots of little details about Looty Dungeon that I love. However, my main takeaway after playing the game all week is that this is most certainly not just another Crossy Road, even though it sure does look like one. It feels more like a fun dungeon crawler first, with the Crossy elements being secondary. It’s an incredibly polished game from top to bottom, and it’s free, so there’s no reason not to give it a shot. If you’re similarly burnt out on Verby Noun games I think you’ll be pleasantly surprised with how interesting Looty Dungeon is.