Generally speaking, I’m not the sort of gamebook fan that replays books terribly often after finishing them. I’m usually okay with getting whatever story and ending comes from my choices, so long as it’s an ending and not a “game over". With The Daring Mermaid Expedition (Free), however, I found myself going back a few times. It’s a relatively short adventure, and it’s almost impossible to satisfy your curiosity about the game’s mysteries in a single play. The author takes a light approach to whole affair, and there’s a playful feeling running through the whole story. I can’t say it’s one of my favorites from Choice Of Games, but if it catches you in the right mood, you’ll probably enjoy it.

The Daring Mermaid Expedition comes to us from author Andrea Phillips, and is set in the same world as her own series of books, The Daring Adventures Of Captain Lucy Smokeheart. In this game, you play as a young scholar whose chance encounter with a mermaid in his or her childhood ends up changing the course of their life. Seeking to become a member of the prestigious Royal German Marinological Society, your character presents their case to a number of important members. In a fortuitous coincidence, an unexpected event at the hearing leads you on a journey to prove whether or not mermaids really exist. I mean, you already know they do nearly from the start, but proving will be quite a bit more difficult. 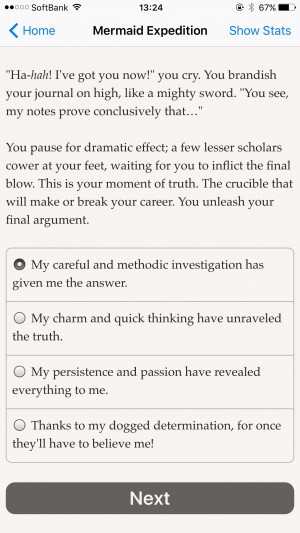 Along the way, you have the chance to find romance, battle pirates, settle domestic disputes, and all sorts of other non-mermaid-related things. Eventually, however, it all comes back to those mermaids. Can you find them? Can you get your hands on evidence? And if you can, do you really want to expose them? And what’s with the seashell bikini things? Aren’t those way uncomfortable? You’ll have to sort out the answers to some of these questions, if not all of them. The story doesn’t take itself very seriously, so you probably won’t find any of the moral decisions to weigh heavily on your mind. There are many cases where your choice results in revealing only a part of the overall picture, though, and it’s hard not to wonder what the whole thing looks like.

That’s ultimately why I didn’t mind too much that The Daring Mermaid Expedition feels so short. Chapters fly by, and the overall tale feels quite front-loaded, but that brevity makes the prospect of playing it repeatedly a lot easier to swallow. Most of the endings are satisfying enough, but it’s certainly harder to reach some than others. If your aim is to conclusively prove the existence of mermaids to the Society, for example, you’ll likely have to take a few kicks at the can to get a feel for how to get what you need. The writing is enjoyable enough that it never feels like a bother to dive back in for another round, at least. My bigger problem comes in the pacing of the second half of the story. It moves too quickly, feeling like a summary of events rather than an actual experience. 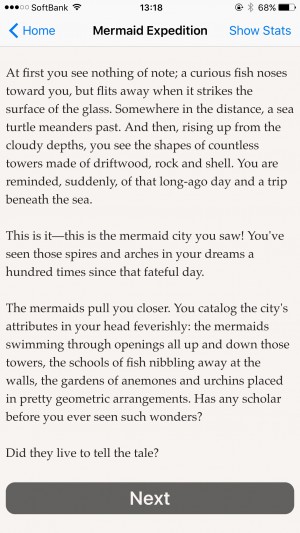 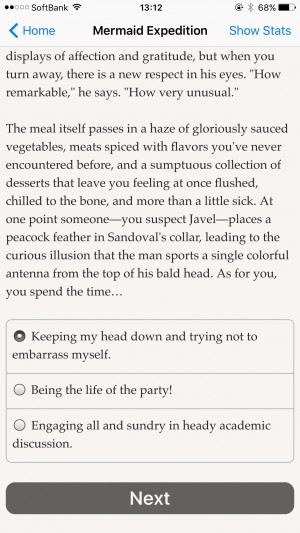 The usual Choice Of Games bells and whistles are present here. You can play as any gender and sexual orientation you prefer, and there are multiple partners to romance no matter which kind of character you’re playing. The romantic relationships honestly don’t feel like they fit smoothly into the narrative in this adventure, but it’s nice to have them even if they come off more as side content than anything else. The game includes a number of fun Game Center achievements to go after, which provides further incentives for replays. While there isn’t any music or much in the way of art, you do get a nice statistics screen you can open up at your leisure to see how your various attributes and relationships are getting along. You can also review any evidence you might have found along the way from that screen. You can play the first part of The Daring Mermaid Expedition for free, and when you complete that, you can buy the rest of the game by purchasing a $1.99 IAP.

While The Daring Mermaid Expedition is certainly a breezy story, it’s not without its merits. It’s assuredly an enjoyable read, and the mystery of the mermaids is a fun one to tease out. At the same time, it sometimes feels like it’s rushing itself a little too much. The beginning of the story has a satisfying level of detail to it, but the further you go in, the more it feels like the author was trying to speed through incidentals to get to the conclusion. It’s almost like Phillips was worried someone out there would complain about when the story would get to the fireworks factory already. I guess I can understand that, but as long as I’m being entertained by pirate attacks and weird kids with Canadian seashells, I’m okay putting off the whole mermaid thing for a while. If you’re in the mood for something light, you’ll probably appreciate the charms of The Daring Mermaid Expedition, but it feels like it could have been a lot more.