Making video game sequels has always been a tricky business, but in the modern age of updates and add-ons, I can’t even imagine how difficult it is to make the best choice for a follow-up. On the App Store in particular, the audience has become accustomed to getting reasonably significant additional content delivered as free updates, with games like Angry Birds (Free) and Candy Crush Saga (Free) getting enough free add-ons to construct a dozen sequels under the old rules. Unless you’re one of the biggest dogs in the yard, however, it doesn’t take long for such efforts to yield weak dividends, since relatively few players ever actually play through all of the content in the base game to begin with. Now, if you’re making the kind of game where you can make your sequel look obviously different in some regard, it’s less of a problem, but for puzzle games, it can be difficult to sway people over to a new installment.

Generally speaking, a great puzzle game almost always comes out of the gate as perfect as its going to be, from a feature-set point of view. Adding bombs, three dimensions, or spheres does nothing but dilute Tetris‘s brilliance, for example. This is the challenge facing King Rabbit (Free), the follow-up to Furdemption (Free). The original game laid out its rules plainly and executed on them with both a high degree of quality and substantial quantity. It was, for all intents and purposes, the very best Furdemption it could be. Now, obviously, if you just want more levels, then that’s something King Rabbit can deliver to you easily. There are 96 in total here, with more promised to come. It’s quite a lot, certainly worth the minimal sum developer Raresloth are asking for. But what does King Rabbit do to recommend it to people who may not have finished or even played Furdemption? 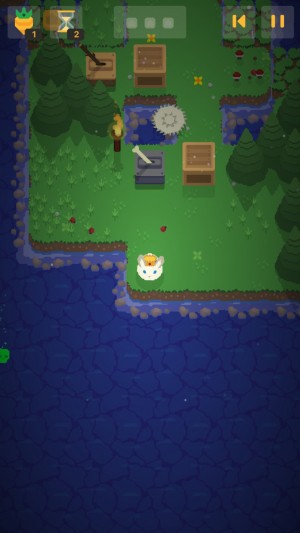 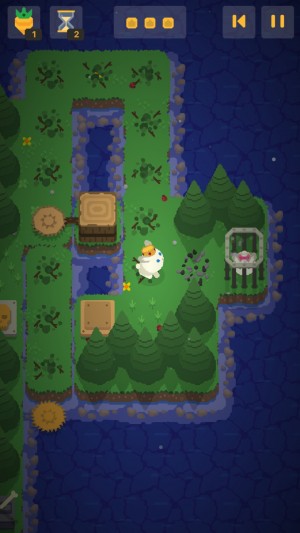 King Rabbit makes a good go of it, at least. Fortunately, the developers haven’t tinkered with the mechanics or the basic gameplay. Furdemption absolutely nailed those things, and trying to tamper with them would have been pointless at best. You’re still guiding a crowned rabbit through small stages filled with deadly traps. There are optional Carats to collect, but you need only reach the goal to move on to the next stage. This time, instead of grabbing a feather, you’re trying to reach a trapped rabbit, but in gameplay terms, it works in the same fashion. Your rabbit can move in any of the four cardinal directions by swiping whichever way you want to move. He can interact with certain objects by pushing them or bumping into them, and some stages hold power-up crowns that will temporarily give the rabbit access to additional powers. As you progress through the stages, the obstacles get trickier, demanding more careful planning and timing.

The most obvious changes in King Rabbit are in how it appears to be softening its image. The title is easier to understand and less weighty, the game starts in a peaceful forest surround by water instead of a pit surrounded by lava, and even the icon itself, while extremely similar to the original’s, has a friendlier look to it. The almost shocking gore of the first game is turned off by default here, so your little rabbit disappears in a fluffy poof if he runs into any deadly traps. And the game itself has a gentler difficulty curve on the whole, though it’s still rather tough in the long run. The game even makes the concession of offering IAP you can use to skip ahead or outright cheat your way through levels. You can buy hints to help you solve the puzzles, or buy temporary or permanent hourglasses that slow down the action, making the timing considerably more manageable.

If you enjoyed the first game a lot, that previous paragraph might have you worried, but set your fears aside, as there’s plenty here with veteran players in mind. While the initial curve is smoother, I feel like King Rabbit‘s later stages are more difficult than those found in Furdemption, and if nothing else, even the easier levels show a greater sense of design mastery. Raresloth not only have an entire game’s worth of experience under their belt, they also have an entire game’s worth of feedback in tow. It’s easy to see the results of that familiarity. There are levels where you need to have your strategy and timing down to the millisecond if you want to survive, but they’re always beatable, and when you do, it gives you an incredible feeling of accomplishment. 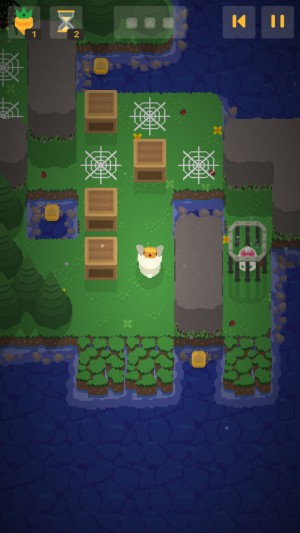 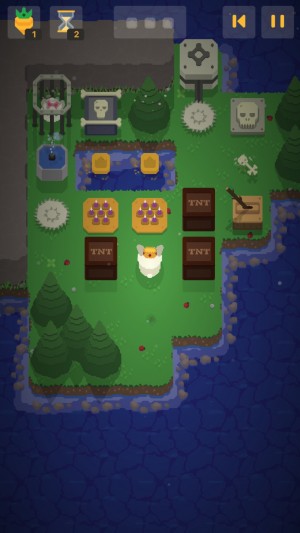 Beyond the simple satisfaction of beating the levels, King Rabbit also does a better job of rewarding the player in other ways as they go through the game. Carats, the game’s bonus collectibles, are now strictly limited to three per stage, and they’re more tangibly useful to the player. In the first game, you had to gather a pretty big pile of Carats to unlock something neat. It was a great goal to shoot for, but with a big, far-off goal, it’s easy to justify leaving a few along the way. In King Rabbit, Carats are the key to opening up new worlds, and as you collect them, you’ll receive regular rewards of other types. More often than not, you’ll receive Diamonds, the game’s other form of currency. You can use Diamonds to unlock new death animations or buy a power-up that slows things down for a short period of time. The game is set to periodically give you Diamonds after enough time has elapsed, so if you’re really stuck on a stage, a little help is never far away.

You can also find Diamonds in the levels themselves, and that’s one of the more enjoyable additions to King Rabbit. Now, each stage has a fairly direct solution that you’ll hopefully stumble on or puzzle out yourself. But if you start pushing at the edges of the box and asking questions you’re not ordinarily meant to, you might find yourself rewarded with a Diamond for your troubles. More often than not, these Diamonds are hidden in spectacularly clever ways, and it’s almost as much fun sniffing them out as it is playing stages the regular way. Even setting aside the practical utility of Diamonds for purchasing various things, the mere act of finding them is rewarding in and of itself. This is a brilliant addition for expert players in particular, who may have found themselves doing wild stunts in the first game and wishing there were some recognition for that kind of behavior.

King Rabbit retains the mechanics of its brilliant predecessor while improving the overall structure of the game. The level design is a step up from the already fantastic work done in the first game, and the addition of the hidden Diamonds in each stage feels like the final ingredient that was missing from Furdemption‘s recipe. King Rabbit is at once friendlier to the new player and more interesting and exciting for fans of the original, a rather difficult task for a sequel to pull off. Is it enough? Well, it certainly did the job for me.