We’ve all been Clashin’ up a storm in the last two weeks. Our forums are still buzzing about climbing through the ranks and I wanted to take a few minutes to talk about how you can get pretty far in this game without even dropping a penny. I’d like to ask you guys to take a moment and also consider contributing to the Touch Arcade Patreon, it is support like this that lets us stream, podcast and write about the games that we like and that we spend time playing. While you won’t be able to quickly reach legendary Arena 9 status on the cheap, there are some realistic goals you can set for yourself before deciding to take the plunge on Clash Royale(Free).

Before I open up the throttle on how you can get to Arena 5 for free, it’s important to remember some of the key points of our previous strategy articles

And a Few Quick Tip Additions:

-Watch Clash TV matches
-Use your free gems to save up 2000 gold for an epic card
-Almost always donate, even rare cards 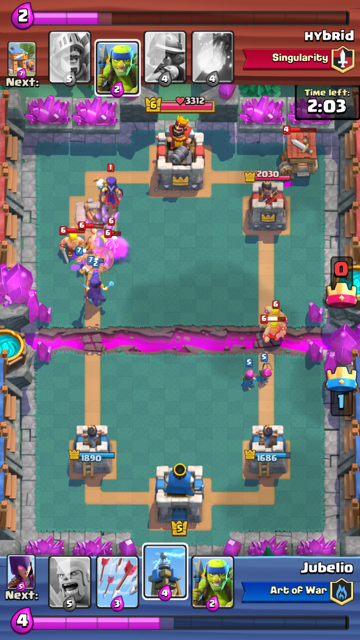 Clash TV is where you go to see the high ranking players do their thing. I would know much less about the capability of my cards if I had not seen them in action at high levels of play. Save up your gold from donating and cashing in gems to get one of the starter epic cards you don’t already have. Each day the store cycles and after you open your free magic chest you should have two of the starter epics. Prince, Witch and Baby Dragon are probably the most important to start with in that order. I like the Skeleton Army, but you dont REALLY need it as much as the others.

These are very solid starting points to embark on your Clash Royale journey. I will be taking a closer look at the nitty gritty tactics you can employ to start amassing trophies and an overview of tough to counter cards you will come across. We have already talked briefly about the different card and troop types that exist in game, but I will be highlighting the cards and tactics I have utilized to climb without spending any money on the game so far.

No matter what deck you ultimately decide to roll with, a huge part of the game is in understanding how much Elixir your opponent is spending and positioning your units to catch an attack before they go on the offensive. Getting to know the cost of each unit will allow you to keep a general mental tally of your opponents Elixir. For example if you were planning on dropping a Giant or Prince on an open lane, your opponent could either easily counter with a 4 cost Skeleton Army, or be completely out of Elixir and lose their tower or more. So how do you set up an open lane charge like that? Usually you want to set up a play by being on the defensive. Ideally you want the opponent to start an attack on one of your towers. Timing is very important in this situation but you want to drop a ground unit like the Knight, Mini Pekka, Archers, Bomber, or Witch so that your opponent forces are within firing range of your tower right before your units engage. What should happen is your units take a minimal amount of damage, destroy opposing units and start a push of their own. If you have planned properly, you can then put that Giant or Prince(or both if you planned just right) in the other lane and initiate a double push that the opponent will be hard pressed to counter. Whenever possible, begin your offensive moves with a strong defensive unit deployment.

Getting at least one building into your deck will allow you to continue building up Elixir especially at the start of the game while providing a solid platform to create defensive troop deployments. If you don’t feel your current cards are set up properly for a full on attack, you can always tap and drag a cheap unit to behind your castle for a very delayed approach to your opponents side. Churning through cards at a slow pace and slowly countering your opponents moves is a great way to make the most out of every moment your units spend on the top side of the map. 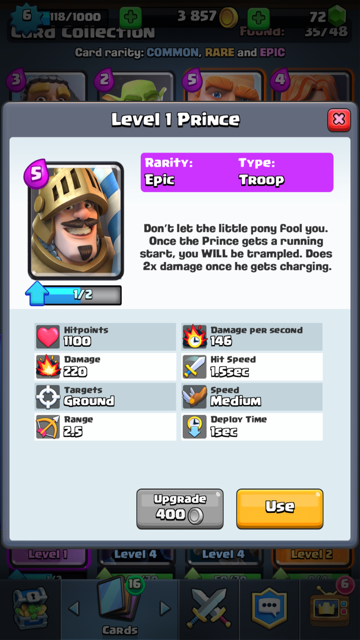 Lets talk about some of the cards you will face on your road up the ladder.

This guy is a jerk plain and simple. While he can be countered by dropping most ground units towards the mid-field area of the map, left alone he is a 5 point tower killer who is much faster than a Giant. My favorite starting play before I got the tesla tower was to wait for the opponent to drop something and go opposite side with Giant and Prince. I put the Giant down first near my tower and added the Prince behind him as the Giant got to the river. It was a very successful starting play that could only really get countered if I didn’t have an Arrows or Fireball spell to clear out whatever got put in front of their tower. Be ready for this guy or you might end up losing a tower.

This card is the perfect big guy killer. Giants and Princes are the primary targets an opponent will save their Army for. A smart play would be to save an Arrows or Fireball spell to carve up an army, but it takes split second timing to get rid of them before they chew up a chunk of whatever guy they are attacking. While it’s possible to deploy offensively, they get tons of value by first taking out something that costs more than they do and THEN going out to swarm an enemy tower.

This one was annoying to me for a while because most things that can target it can also be killed off very quickly. The downside is that you won’t be mowing down towers with this card. Baby Dragon mainly functions as an aoe attacker that can shut down or blunt almost any attack. Dont try to use a Bomber, Goblin Spearmen or Archers card to counter, go straight for the Musketeer or Witch but only once it flies onto your side of the map.

Most of the time big cards get put in front of the Witch to spike her push power. If she is by herself, her tower damage is pitiful. She will, however, mow through ranged units and swarm units really fast. If you are going to kill her, you have to let her get to your side of the map and kill whatever Giant or Barbarian or whatever card she hides behind. Once a Witch is played, in most cases that lane is going to get swarmed and a counter play could easily develop with enough Elixir left over to keep your towers safe. Fireballs and defensively played cards that have a decent amount of HP are your friends. Barbarians, Knight, Musketeer can all take care of the Witch. If she is already attacking something, Archers or Goblin units deployed off to the side aren’t a bad idea. 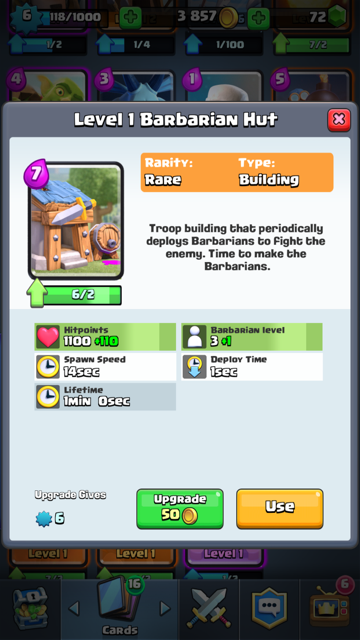 There are a number of spawn huts with Goblin Hut available at Arena 1. The Goblin and Skeleton spawners can be ignored unless additional things get thrown into their lane, the Barbarian hut needs to be addressed and is annoying, but it’s a 7 cost card so sometimes you can just push the other lane due to the heavy point investment it requires.

Bomb Tower and Cannon can be pretty easily dealt with by flyers like Minions or the Baby Dragon. Xbow even with the impending nerfs will probably require a lot of attention. As another 7 cost card, it represents a large Elixir investment, but by no means should you allow it to unload on your towers. The Tesla is now on pretty even footing with it’s Arena 4 buddy the Inferno Tower. They can both target flyers and in general you just want to do some damage to them so they despawn faster. I wouldn’t suggest investing a lot of Elixir on them, but rather wait them out and be close to full Elixir for when they despawn. If you are big on building killers like the Balloon, Giant, or Hog Rider, they can be pretty effective too.

These big guys usually require multiple drops. Whatever troop cards you can put down are probably a solid choice. Realize that your opponent could have an aoe spell or Bomber or Baby Dragon ready to drop behind so keep your weaker troops as spread out as possible. Barbarians are probably my favorite to drop because aoe really doesn’t hurt them too much and they provide a great buffer for ranged units to hide behind. 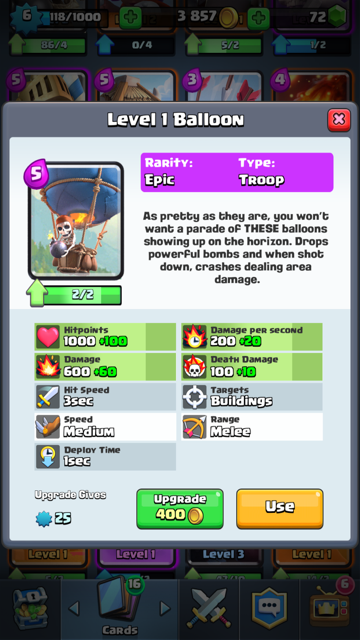 The Balloon deserves special mention because it is something that needs to die before it gets to a tower and it flies so most of your ground troops will ignore it. It also does not target units so it will make a bee line for the closest building. Minions, Musketeer, Archers, Goblin Spearmen, Baby Dragon and the Witch all pretty much need to be thrown at one as fast as you can. Fireballs can also work here but the bottom line is don’t allow it to get near your stuff. Literally half of my deck is usually capable of contributing to a balloon kill and I would hesitate for swapping any of them.

Like the Balloon this guy rushes towers. I usually save Barbarians to body block if I see an opponent drop him. He does plenty of building damage so don’t let him go somewhere unchallenged. Since he does not target units, feel free to drop even weak stuff right in his way.

There are a number of cards that can dish out damage no matter where something is on the map. The bottom line is that a low health tower isn’t safe and killing yourself trying to save one that has less than a quarter health can be futile if a rocket gets dropped on it. Goblin Barrels should definitely be countered with a cheap troop card, either ranged or melee will work. Even a level 1 Goblin Barrel can do up to 500 damage to a tower if ignored. Be aware that the cost can become very restrictive. If an opponent launches an early Rocket, that would probably be a good time to get more aggressive. 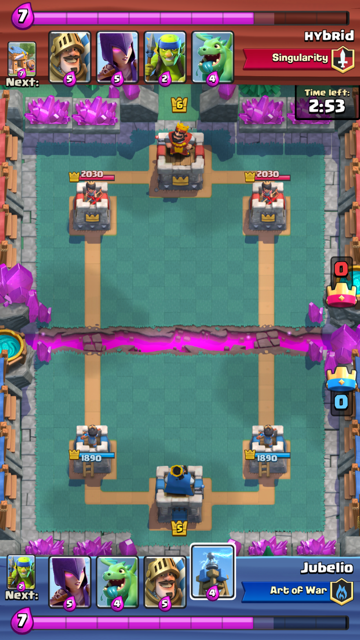 Building your deck should always consist of answering three questions. The first question is ‘what cards do I most need to counter?’ The second question is ‘what can I bring to knock over a tower?’ The third is ‘where can I trim my Elixir costs?’ Your answers may vary widely on how many trophies you have and they will absolutely change as you start ascending the Arenas. I still try to have 3-4 answer cards for the Balloon cause that thing is so annoying, but your particular annoying card could be something completely different. Once you’ve figured out how to counter the most annoying cards, and how to siege with strong cards, be sure to leave room for 2-3 cost cards. The worst feeling in this game is when your opponent drops something expensive and you are sitting on 1-2 elixir and there is nothing in your hand that costs less than 5. I try to only have 3 cards in my deck that cost 5 or more at any time. I’ll be writing more about my own deck reccommendations soon. In the mean time, remember you don’t have to spend to get up into the middle ranks of Clash Royale.