If you listen to the Touch Arcade Show podcast every week (and you should), then you might recall what a frustrating experience Jared had trying to play Rocky Hong’s Beat Stomper ($1.99) on a recent episode. The game seemed sorta like Doodle Jump ($0.99), but the timing was all weird and it took quite a few attempts for him to get the hang of it. Eli, on the other hand, had no problems whatsoever and demonstrated this by apparently playing with his eyes shut. Two completely different experiences with one simple high score chaser. So what about me? Or you, for that matter? 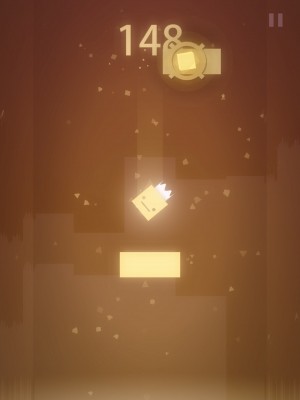 Well, unfortunately I started out in the Jared camp. My first few runs were abysmal, and it was mildly infuriating that such a simple concept–the likes of which I’ve played before–could be so weirdly challenging. It looked easy (heck, I could tell it was easy), but I just couldn’t get into Beat’s groove.

I persisted, though, as I really loved the game’s visual aesthetic. To say it’s “flashy” would be a gross understatement–in fact, it’s literally flashy. From the moment you begin a run the game starts throwing all kinds of colors and particle effects at you, to the point where it’s almost overwhelming. As I said, though, I really dig it. Really, there are only so many ways you can make a vertical jumper compelling in 2016, and I suppose rapidly strobing a bunch of shapes and colors at your face is one of them.

The music is another high point. I haven’t listened to techno in over a decade (as you can tell from me using the term “techno”– EDM? Dance? I’m old.) but the songs that play while you stomp ever higher are fun, catchy, and fit the seizure-inducing visuals perfectly. Initially just one song is unlocked, with more opening up as you complete various goals (like “End a run at 100” or “Reach 50 without a boost”.) Each piece of music also has its own visual theme as you play, too, which is a really cool touch. 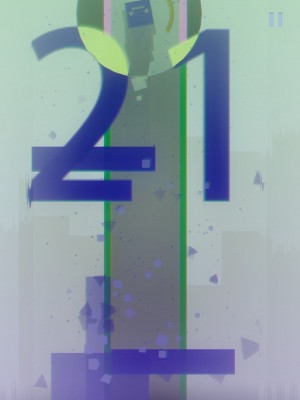 So the visuals and music are fantastic, and for that reason alone I kept playing. If you haven’t yet gathered what the gameplay is like from the screenshots and references to Doodle Jump and stomping, allow me to explain: You are a happy little square, and when you tap the screen you jump high up into the air. Another tap will force you to butt-stomp (edge-stomp? You’re a square.) straight down, hopefully landing on the next platform above the last. These platforms are always moving back and forth, so you have to be careful with your timing if you want to get really high up there and achieve a good score–especially since the movement of the platforms affects the direction you jump in.

The timing really is crucial, too, as the reason I couldn’t get the hang of it right away is because when you tap to stomp, the square dude freezes for a split second before coming down. And during that brief moment, the platform you’re aiming for is still moving (albeit in slow motion). Past experiences with gaming has trained me to expect immediate stomping, and that quarter-second freeze was infuriating. I mean, it’s not like it’s just a visual flair and everything stops, because the stupid platform you’re trying to hit is still moving. All this may seem very minor, but it was enough to completely disrupt my sense of timing in a game that’s already fairly fast paced.

Eventually I did readjust, and once that happened the game really opened up. Jumping and stomping from platform to platform is just as satisfying as it’s been in any number of other vertical jumpers like this, and on some level I think I even grew to appreciate that little time-skip for forcing me to shift my brain and play slightly differently. Even though I have the hang of it now, though, doesn’t mean it’s an easy game. The higher up you go, the smaller the platforms get, and the more likely you are to misjudge something and ruin a good run. There’s also a power-up (just one) that will shoot you up 20 floors, so that’s pretty handy.

Beat Stomper is a far more interesting game than I was expecting. Sure, at a very basic level it’s a pretty standard vertical high score chaser. What makes it stand out, though, is that the developers seemingly rounded up all the drugs and stuffed them into the coding somehow. Plus, there’s that devious split-second hesitation before every stomp that can potentially throw off even the most hardened of mobile gamers. At the same time, others can apparently play with their eyes shut. The music is wonderful, the visuals are insane, and the gameplay is (sort of) classic. Plus, it’s only two bucks. Let’s get stompin’.