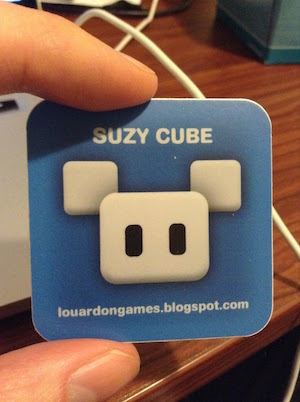 Everyone I bump into during GDC week always asks what is my favorite thing I’ve seen from the conference. For me I didn’t have a solid answer for that question until I saw Suzy Cube, an upcoming 3D platformer from solo developer Louis-Nicolas Dozois of Northern Bytes Games. Suzy Cube has an interesting history, as back in early 2013 Louis (pronounced “Louie" (Eli Note: Nah, pronounce it “Lewis".)) found himself enamored with Nintendo’s 2012 3DS masterpiece Super Mario 3D Land and it got him thinking a lot about the game’s design, particularly how well the camera worked in the game as many times that’s a sticking point in 3D platformers. At that time he was also playing a lot of mobile games, and so wanted to explore the idea of making a 3D platformer with a great camera as well as one that would work really well with touchscreen controls.

What started out as a curiosity led to building a prototype, which led to building out a small demo, which led to creating an actual main character, which led to building out levels and worlds, which led to… well, at this point Louis found himself knee deep in making an entire game. If you give a mouse a cookie, you know? So for the past few years Louis has been plugging away at what has become Suzy Cube during free time outside of his normal day job. About 8 months ago he was faced with an opportunity to leave the day job and be able to work on Suzy Cube full time, and in that time the game has really started to come together wonderfully.

Louis is quite open about Suzy Cube being heavily inspired by Super Mario 3D Land, but at the same time this is far from a clone or an attempt to cash in on a popular Nintendo game. There are many obvious similarities to Mario 3D Land in terms of how Suzy moves in the world and some of the mechanics in the game, but the real magic of Suzy Cube is how much thought Louis has put into the development process and the fundamental elements of the game in order to make a 3D platformer that truly feels made for touchscreens, as opposed to simply making a 3D world you can run and jump around in and just slapping it on a mobile device with no thoughtfulness or care. We touch on all of this in our lengthy look at Suzy Cube here at GDC.

In case it wasn’t totally obvious, I really, REALLY like what I’ve seen of Suzy Cube so far. It’s hard to overstate just how great the game feels on the touchscreen, and simply how it feels in general as a 3D platformer. It will probably sound like hyperbole, but in terms of the overall “feel" of the game this is definitely a Nintendo-level effort. Unfortunately there’s still a lot of work to be done before Suzy Cube is finished, but in the meantime you can follow along with the game’s development on Louis’ development blog, the lengthy thread in our developer forum, or the thread in our upcoming games section.