Dungeon Raid ($0.99) was one of those games where, if it got its hooks into you, you probably weren’t going to play anything else for a good long while. There wasn’t a lot of mystery behind that, to be honest. The mechanics were familiar and simple to learn, but offered a lot of depth to the player looking for more. The RPG elements gave you a feeling of progression that isn’t typically found in many other puzzle games. You could pick the game up whenever you had a few minutes and have a good time, or settle in for a longer session. I Keep Having This Dream ($1.99), the latest from Dungeon Raid developers Fireflame Games, is not the same kind of game. It’s a little more opaque, a little more complex, and it comes off like it’s aimed at a narrower target in general.

That’s fine, of course. It’s a game that asks for a greater investment on the part of the player to work out its complexities and mysteries. There’s a lot of appeal in that type of game, but if you’re going that route, you have to be very careful that the player feels properly rewarded for their efforts. I’m not sure that I Keep Having This Dream fully pulls that off. You’ll tug at, untangle, and try to process the various connecting pieces of its design, and in the end, there’s a good chance you’ll walk away from it feeling bored and unimpressed. It’s definitely got some interesting ideas, and while you’re coming to grips with the game, there’s some excitement in the discovery of them and imagining how they’ll all fit together. Play long enough and you might feel, as I did, like some of those pieces don’t come together very often at all. It’s a complicated game to learn initially, and the pay-off is disappointingly meager. 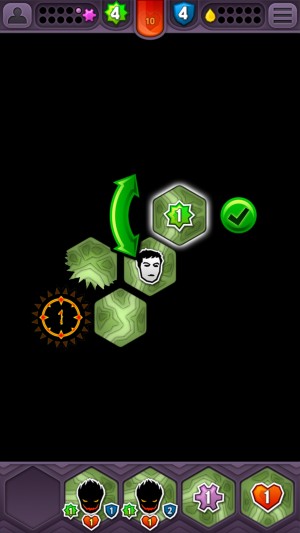 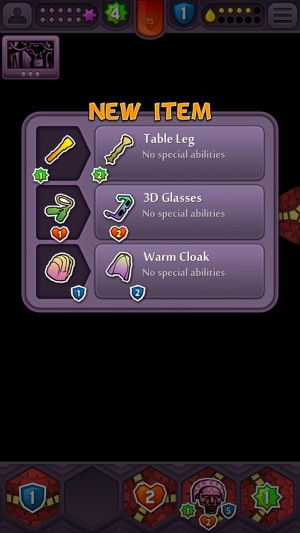 I Keep Having This Dream is a strategic puzzle game where you lay down tiles from your hand to make a path to the exit of each stage. As you drop tiles, they’ll be replaced with others you’ll pull randomly. The tiles have various path designs on them, so the first thing you want to make sure of is that you’re moving yourself in the right direction and not building your way into a dead end. Tiles also come with symbols that add to your attack and defense attributes or give you points towards a new piece of gear when placed in the correct spots on the board. There are also Snags, which are simply monsters you’ll have to either place and fight, or hold and tolerate. You’ll have to make that decision based on the type of monster you’re holding, as the game includes a menagerie of special creatures who are designed to put the whammy on you in either case. 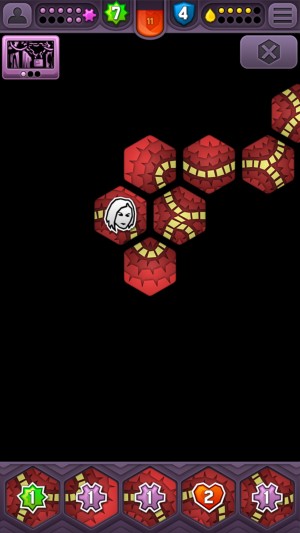 Snags are the most frequent form of conflict in the game, but they’re not the most dangerous. That quality belongs to the Nemesis, a nebulous creature that will chase you along the path you’ve made. The Nemesis will only move under certain conditions, and it becomes stronger and deadlier as you level up from beating Snags. If it touches you, that’s the end of the game. If you plan carefully enough, you can avoid the first thing that brings Nemesis to your doorstep. All you have to do is avoid working yourself into a dead end. Discarding tiles also pulls the Nemesis forward, which is another factor you can usually control. The other thing that calls it forward is a little trickier to keep on top of as you play. If you run out of life points, you won’t die, but Nemesis will advance forward according to its level. As it advances, it will collect any experience you’ve left behind from killing enemies, powering both you and it up. Depending on your situation, it might be advantageous to call your Nemesis forward since it can give you a boost. The nearer it is to you, the more risk you take that an unexpected turn will result in your death, however. Ideally, you’ll be dancing on the edge of the knife, taking all of the gains from having Nemesis in your breathing space while deftly avoiding anything that will bring it over the edge.

It’s an exciting idea, but in truth, you’ll rarely want to keep the Nemesis close to you. It’s a nice Hail Mary if your life is running low and you need the boost a level-up provides, but the risk of pulling a bad tile becomes high pretty quickly. You’re better off carefully putting one foot in front of the other, keeping as much distance as possible between for as long as you can possibly manage. It’s those long moments between the start and the end of each level that wear on the game. You keep the Nemesis back and play things safely because there’s no compelling reason not to. By the end of the level, your hand is probably stuffed full of things that can threaten you, and it’s here where the real excitement of I Keep Having This Dream comes in. I wouldn’t say the long build-up of each stage is quite worth the climax, but it’s pretty close.

Hopefully counter-balancing that loaded hand is an assortment of Events. The game doesn’t do a very good job of explaining this part of its mechanics, but after gaining a level, you can choose to improve one parameter and select one new ability. The first level-up always offers you the chance to experience Events, which are special moves you have to charge up by placing certain types of tiles. Once you’ve filled their requirements, you can play them at any time, and their effects can completely turn a situation on its head. Once you use an Event, it’s gone, with another Event being dealt to you on the following turn. While many of these Events have straight-forward results, others require you to have a good grasp on how the Nemesis moves and what actions like discarding tiles mean for you. You’ll need to learn how to use these kinds of Events properly if you want to survive past the first couple of levels. 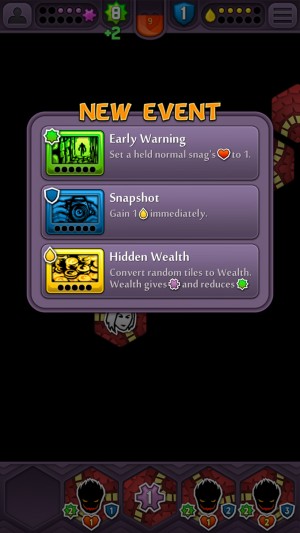 Dying sets you back to square one, but if you manage to clear any levels on your run, you’ll be rewarded with some keys. You can use these keys to unlock new faces to play as, new Snags, and new Events. The faces are cosmetic only, while new Snags and Events open up gameplay opportunities. They’re fun rewards, but it’s worth mentioning that very little you pick up here will guarantee you better results in the game, and in fact, the Snags will make things harder on you. I kind of like this approach to the meta-game, though. A lot of games use this kind of gated content to make sure the player is constantly moving forward, which takes away some of the motivation to improve at the mechanics. I Keep Having This Dream just expands out a bit more, leaving the task of improvement up to you and you alone.

Aside from the keys and unlockables, the other carrots the game uses to keep you moving forward are the vague snippets of story it hands out between stages. You’ll get maybe one or two sentences hinting at a mystery that is never actually resolved. More clues can be found in the names of special Snags, which frame these monsters as aspects of your own psychological make-up. Even the oddly symbiotic nature you have with your Nemesis hints at something very interesting. As far as I could tell, you never get anything more than these bare hints, but they’re fairly effective in terms of giving the game a unique identity. If you’re the kind of person that needs resolution or even some kind of building structure in your stories, you might be annoyed with this aspect, though.

I love a lot of the ideas in I Keep Having This Dream, and I genuinely appreciate its originality. There are times during the game where it feels truly great. I think my problem with the game on the whole is that those great moments are outweighed by less interesting stretches of play and a tendency for even the best-laid plans to be completely destroyed by the roguelike nature of its difficulty curve. It feels like it’s aiming to be a skill game, but chucks that all out the window at a certain point in every play session. Add all of that together and you’ve got a game that’s certainly worth playing for a little while to experience its high points, but one that is unlikely to hold your attention for all that long.