Over the course of a few months I’ve gone from not knowing who Nitrome was to being schooled in a master class by their games. I’ve played through their entire catalog at this point, and whenever a new offering is available, I’m ready and willing to snatch it and give it a shot. Ultimate Briefcase (Free) is merely published by Nitrome (the developer credit goes to Quite Fresh), and as an arcadey action game, it delivers on some level.

The premise is one of the best parts. Equal parts cartoony and absurd, the gist is that a giant missile system, Terminator style, is laying waste to a city. Your character is merely on their way to work, at which point your commute becomes a warzone, and the game begins. To be clear, said “zone" is literally only a few screens in total. You’ll be dodging bombs left and right, which range from gigantic mini-nukes to splash bombs, some of which pepper out power-ups and coins to pick up.

Once you’ve acquired enough energy you can use your briefcase (seemingly made of titanium alloy) for a shield, which protects your head but not horizontal blasts. Beyond that, moving from side to side with digital buttons is just about all you can do. It sounds shallow, and that’s because to an extent, it is, but the bomb patterns are nicely done where each run doesn’t feel the exact same. Having to dodge between splashes and set bomb blasts is great, since there’s somewhat of a telegraph system that you can pick up by learning the different bomb types and watching their shadows as they fall. Because of this, deaths don’t feel cheap. 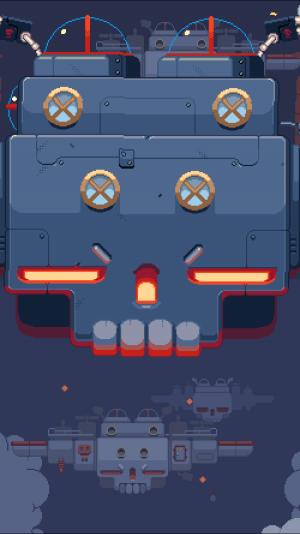 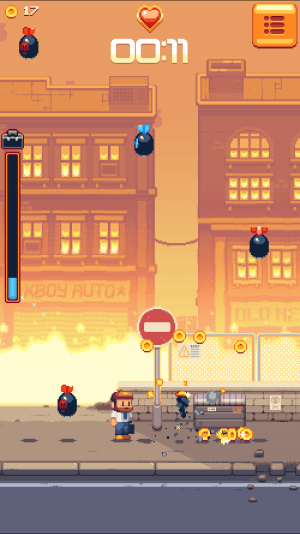 Your job is to basically dodge as much as possible, grab coins, and unlock more characters. It’s a rat race but the sleek visuals and promise of better, RPG-like upgrades is a nice delivery system for more plays. In that classic Nitrome way, it feels like a retro game that’s built for a modern device. I especially like that there’s no real “doomsday clock" mechanic, where the game becomes impossible in a short amount of time. The portrait or landscape choice is a nice touch.

The extra content extends to not only characters, but levels as well. It’s not often you see the latter in games, as there are a few new things to account for, which mixes up playthroughs quite a bit. Oh, and that’s not even including the backstories that are unlocked, told by way of security cam footage. They help fill in some of the game’s lore, which trancsends the typical goofy gimmick you usually see in these types of games. It never really gets to the point of awe-inspiring on that front, but it’s a neat thing that elevates the project.

Nitrome is hitting it a little hard in terms of IAP lately though, which is also the case with Briefcase. In addition to a pricey $3.99 option to remove ads, there are also coin purchases for in-game content, which feed into buying more heart containers and power-ups. On top of all of this is support for video ads, which can be viewed once per death to return to life. It’s a little bit too much, and even though I wasn’t compelled to really spend anything, it can get a bit overwhelming at times. This is especially annoying if nearly every game you load up does it.

Ultimate Briefcase is going to be one of those things you pop out every so often to try to chase a high score, and with its semi-interesting progression system, occasionally earn something from. It gets a little aggressive at times when it comes to microtransactions, but it’s fun, and it’s playable, which counts for something.