In between crunching RPGs, I often like to unwind with various types of interactive fiction games. They’re relatively short, and they’re easier to fit into small pockets of time during the day compared to many other games. At the same time, they give me the satisfaction of reading a story, even if it’s not always a great one. I’ve reviewed many of these types of games here at TouchArcade, but one of the more popular companies whose works I had yet to touch on was Voltage. You may not have heard of them, but they’re basically the Harlequin Romance of the App Store. Their games are incredibly successful in Japan, their home market, but they’ve also found quite a bit of success worldwide. The closest we’ve come to covering their games was when I reviewed Queen’s Gambit (Free), a product of their American branch, but I figured with Voltage launching their latest game and me needing something light to play, the time was ripe to finally cover one of their romance games.

Samurai Love Ballad: Party (Free) doesn’t appear to be a particularly unusual game in their line-up, which mostly consists of various unusual premises for a woman to be in proximity of a bunch of hunky dudes. This time, the setting is in Sengoku-era Japan, and the hunky dudes in question are famous historical figures like Oda Nobunaga and Tokugawa Ieyasu. You play as a young woman who is forced to work in Oda’s court to protect her family. There are lots of eligible guys, but for each story path, you’ll be focusing on two in particular. I elected to try out the star-crossed couple that is Oda Nobunaga and Akechi Mitsuhide, because I’m not the type of person to settle for anything less than the most ruthless of daimyo. 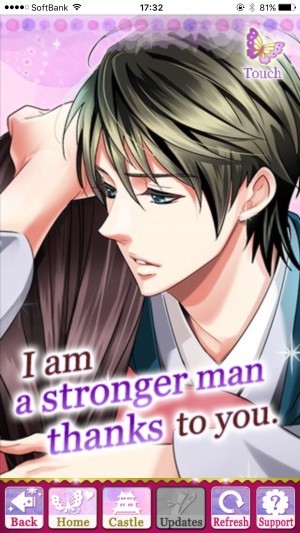 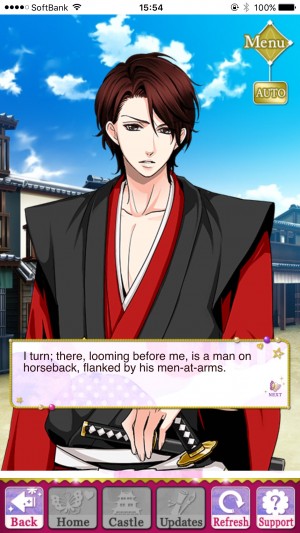 It only took me a few minutes to realize that what I was playing was basically the romance visual novel version of a social RPG. The story is broken down into small snippets that each require a Love Pass to view. Love Passes refresh each day, but you can buy them in the game’s shop using real money if you just can’t wait to see what happens next. Occasionally, you’ll hit a point in the story where you need to fulfill some other sort of qualification to move on. You might need to increase your cooking skill in the cooking mini-game, which consumes stamina that slowly comes back over time. You might straight-up have to spend some Pearls, which are another form of premium currency that allow you to move past these sections, refill your stamina bar (but not your Love Passes), or expand your inventory capacity. You can also use coins to move the story forward, and they’re easier to come by, but in doing so, you’ll get a lesser ending that doesn’t reward you with a portrait.

Doing well at the cooking mini-game is largely dependent on your Item Power score, which in turn is determined by the clothes and accessories you have equipped to your heroine. You’ll get those items as rewards for completing various tasks, but you can also earn them by playing a random lottery. That costs coins, which you’ll also earn during the cooking mini-game and through various other means. You can also improve your odds by bringing along a friend, just as in social RPGs. If you use a friend, they’ll earn coins and help you out, but you can drag in a stranger if you need to. You also have a castle room that you can decorate with various items. Your friends can visit your castle, and if they do, you might get some gifts or coins. You’ll also earn cooking skill points, and some rice balls you can feed to your hunky samurai of choice to level him up. 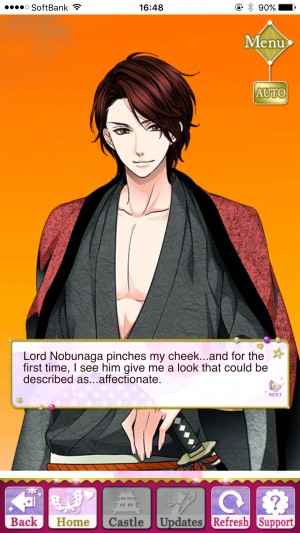 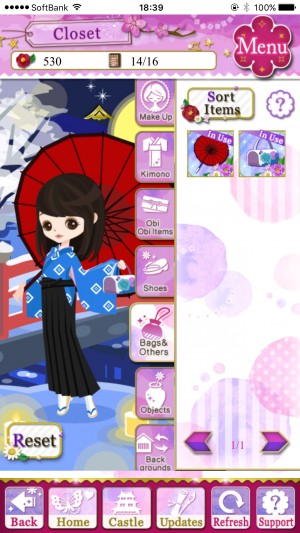 If this all sounds awfully complicated for a game about trying to get a handsome young warlord to fall in love with you, well, you’re right. I’ve played less complicated 4X strategy games than this. Given how many systems are intertwining here, it’s a wonder it works as well as it does, but it’s still an awful mess to untangle, particularly in the beginning. The biggest pinch comes from those Love Passes, however. You only restore five each day, and each one buys you a single story section. Alternatively, you can buy them for roughly $0.99 a pop. Episodes are broken down into five sections, and each one lasts around two minutes, depending on your reading speed. The game currently contains four potential partners, with several more planned to be added, and each of those partners has their own series of several episodes. Assuming you don’t buy any Love Passes, it would take weeks to work your way through one path. With only a couple minutes of play per dollar spent, it’s hard to recommend purchasing them.

I suppose the intention here is that you play through one episode each day, giving you about 10 minutes of story to enjoy during your coffee break or something. For a lot of people, that’s probably enough for their needs, but if you’re the sort that likes to tear through a story in one sitting, this is essentially lose-lose monetization. It’s in no way worth it to spend the money given what you get in return, but the game’s pace is positively glacial if you try to play it for free. It’s too bad, because while my Love Passes were flowing, I was kind of enjoying Samurai Love Ballad. Its additional systems and mini-games give it appeal beyond simply making a few choices here and there, and I found the concept of casting the famous figures of the Sengoku era with guys who look like they wandered out of a boy band bizarrely intriguing. Although they look soft, their personalities aren’t much different from how they’re typically portrayed. So, for example, Nobunaga is quite merciless and every conversation with him feels like you’re seconds away from losing your head. It’s hard to get much narrative steam going when the episodes are as short as they are, but my problem with the game certainly wasn’t that I didn’t want to continue reading. 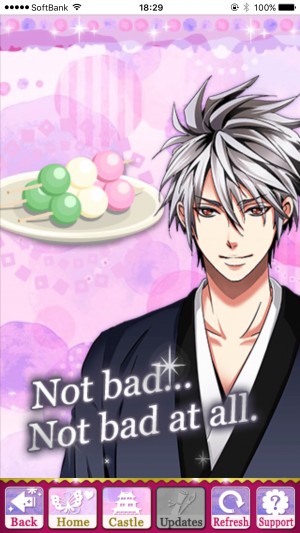 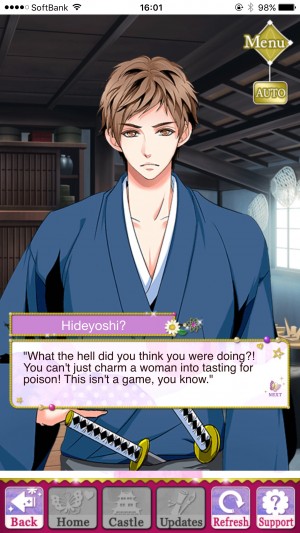 No, it all comes back around to how tight-fisted it is with doling out its story. Don’t get me wrong, this is obviously a model that works well for Voltage. Their fans seem quite happy with it, so it’s obviously working for someone. But given the way I like to enjoy my interactive fiction games, all the dress-up and cooking mini-games in the world can’t make up for the fact that simply reading these short stories in a day or two would cost me a small fortune. For all the merits of Samurai Love Ballad: Party, it’s that essential aspect, more than anything else, that makes it hard to recommend.