Virtually everything can be made better by doing it in space. Except breathing oxygen, I suppose. And eating potato chips. And using the toilet. Okay, let’s revise that. Some things can be made better by doing them in space, and engaging in capitalistic ventures just happens to be one of them. The core principles of buying low and selling high simply go well with traversing a lonely universe and battling space pirates. Perhaps unsurprisingly, iOS gamers already have a few games to choose from in this style, including games that focus mostly on trading mechanics at the expense of action or visual flourish, ones that put most of their eggs in the combat basket, and some that try to dazzle you with their slick presentation and sense of immersion in order to build a believable universe. Simply put, there’s a fair bit of established competition for Stellar Wanderer ($4.99), albeit little of it recent. 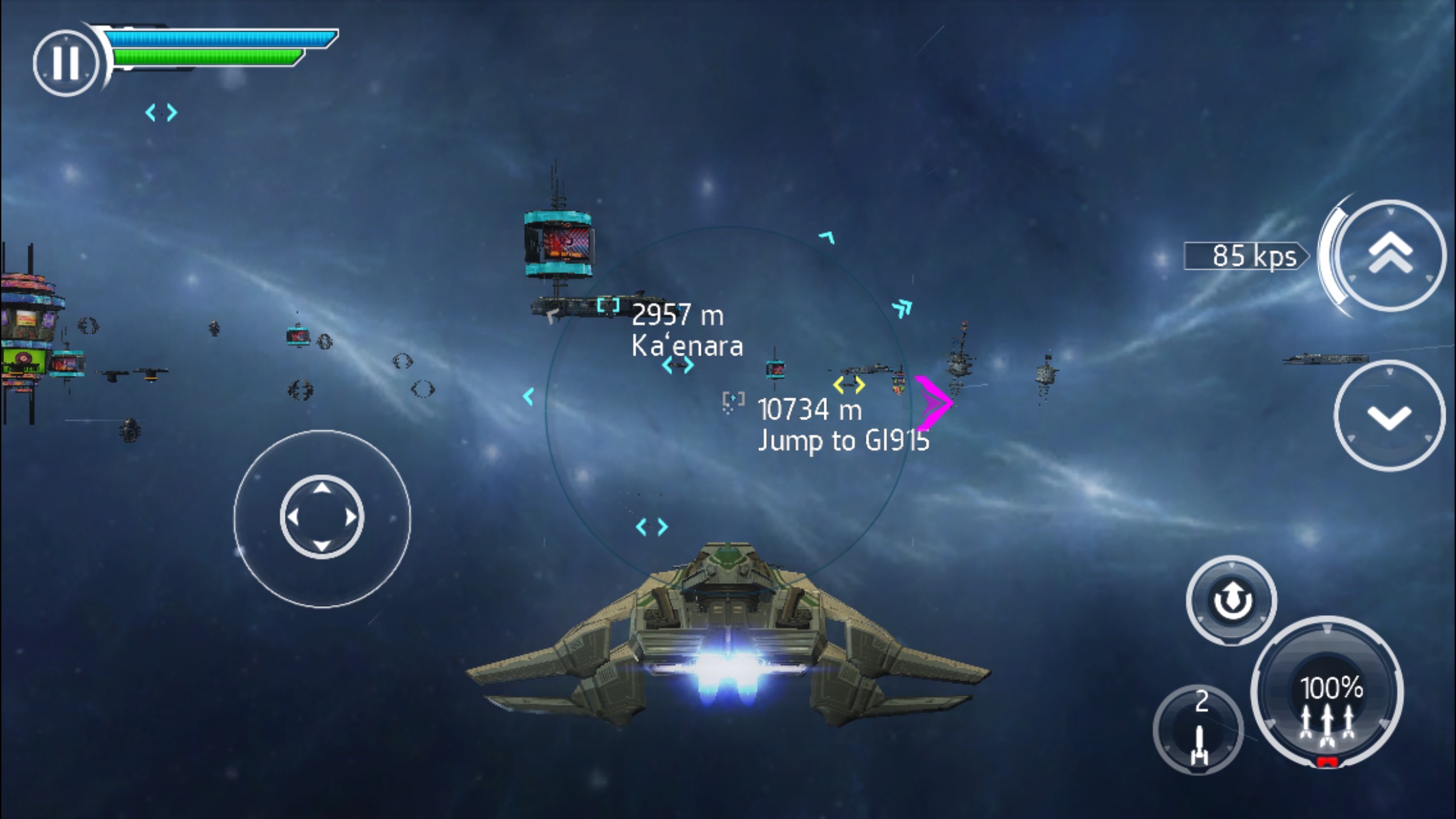 There’s a reason for that, of course. These kinds of games are fairly complicated, both to create and play. Fans of the sub-genre, who tend to be gaming veterans, generally want them as paid games with as little IAP as possible. That’s not an overly-healthy market in 2016 on the iOS platform, so most space-faring games from recent years have opted either to go with more economic production values or use their gorgeous assets to make a shorter, more straight-forward action game. In trying to provide both a relatively deep, long-lasting experience and make everything look and sound good, Stellar Wanderer tries to scratch an itch that has barely been scratched since Galaxy On Fire 2 (Free) released more than five years ago. It does a fairly good job of it, although I don’t think it’s quite as good as that benchmark title. With the amount of time that has passed, however, I’m not sure that even matters as long as it succeeds on its own merits.

Stellar Wanderer‘s story set-up is a familiar one. Through a series of circumstances, you end up owing a shady guy in exchange for a ship. He sends you off to do some tasks for him, most of which are highly dangerous. Through these missions you’ll meet others who will have work for you, and there’s always plenty of side-jobs you can take on to make some extra cash. If all else fails, nothing’s stopping you from going out and mining to your heart’s content. 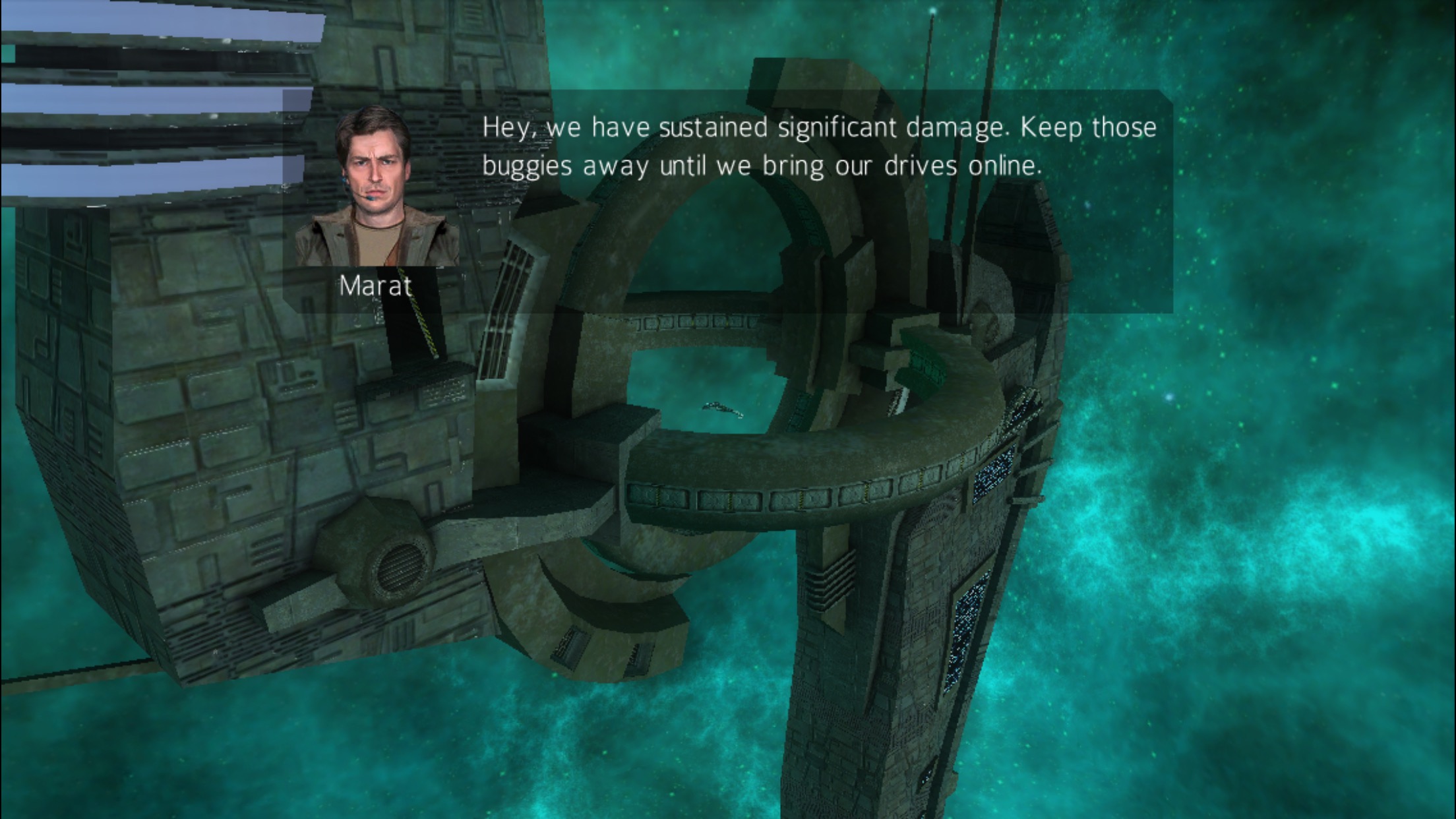 The overall goal is to progress through the story, naturally, but the difficulty curves upwards in a hurry if you try to tackle missions one after another. You need to upgrade your ship frequently, and that takes money. Fortunately, there are a few ways to go about making it. As already mentioned, you can take on side-jobs to earn cash, or go out mining resources from asteroids. You can also take advantage of the principles of supply and demand by buying resources from one location and selling them off somewhere else to make a profit. It’s not the most efficient way of making money early on, but it does let you enjoy cruising around the galaxy a bit. Just keep an eye out for roving pirates, because they can ruin your day in a hurry.

The first part of the game comes on a little strong before you get into the rhythm of things, but that’s not that unusual for this type of game. Pirates are hiding around every corner, which is quite impressive given the general lack of corners in space. They can slice up your starting ship in a hurry if you get into the path of their lasers, so it can be kind of frustrating if you want to wander around right at the beginning. Once you get yourself established by completing a few missions and installing a few upgrades, you’ll be free to do a little more exploring. Add a few extra compartments to your ship, and you’ll be able to do intergalactic ambulance work, shipping, and even a bit of smuggling. The side-jobs even include the occasional race. As you upgrade your ship, you’ll be able to take on more difficult jobs, earning more cash to sink into your ride. It’s a pleasing, familiar cycle. 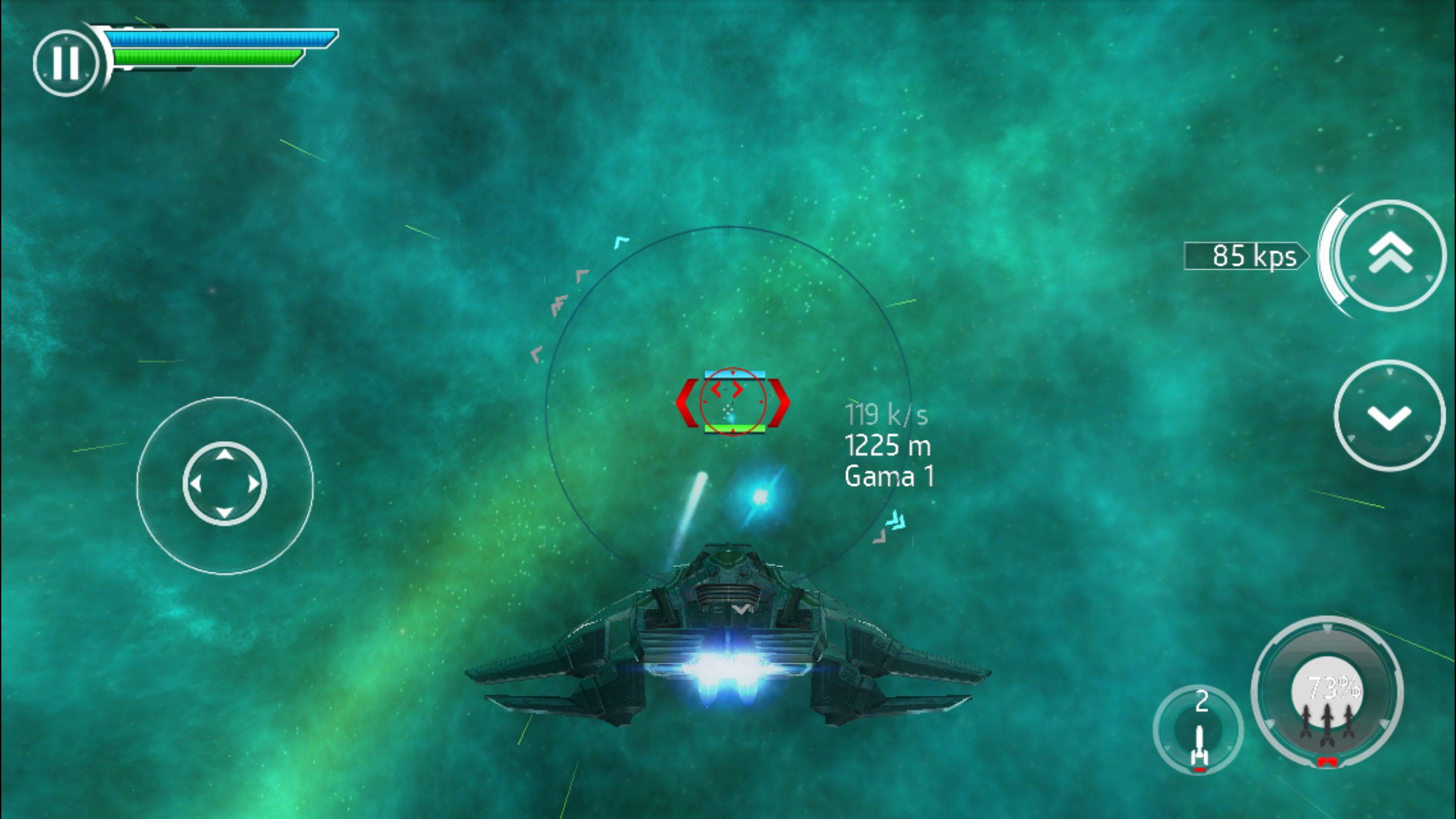 You’ll need those upgrades to survive because the combat itself doesn’t take or allow much nuance. Get the enemy in your sights and fire your lasers, tossing out the odd missile if you want to spare the expense. You can move left, right, up, and down, but you won’t be pulling off any fancy rolls or corkscrews. The biggest application of technique required is in using your afterburners to help position yourself. It works well enough and it can certainly be exciting when you’re taking on multiple opponents, but the combat feels a bit repetitive at times. That’s only an issue because you’ll be doing an awful lot of it no matter what else you’re trying to get done. A few extra maneuvering options might have helped spice things up a little. It’s pretty much your basic arcade-style shooting as it stands, doing the job adequately if a bit mundanely. That’s hardly a surprise, given this is more or less a spiritual successor to Strike Wing: Raptor Rising ($2.99), but it would have been nice to see the combat expanded the way the rest of the game was.

The trading is equally perfunctory, though I’m not sure how you could spice that aspect up anyway. Different stations offer their array of goods for different prices. If you see something going cheaply, it behooves you to fill up your cargo hold with that item and haul it somewhere where it sells higher. You can also find resources out in space, usually left behind when a ship is destroyed. Some of those goods are hot, though, and if you try to pass through a border with them in your normal cargo hold, you’ll be in big trouble with the local authorities. Get a smuggling compartment as soon as you can. It more than pays for itself over time. That’s about the extent of optional interactions you’ll have with NPCs, however. Most of the dialogue comes before and after each mission, and you’re really just along for the ride. While the story might not be anything special, the dialogue is fairly well-written and the voice acting is surprisingly good, particularly for the main character. 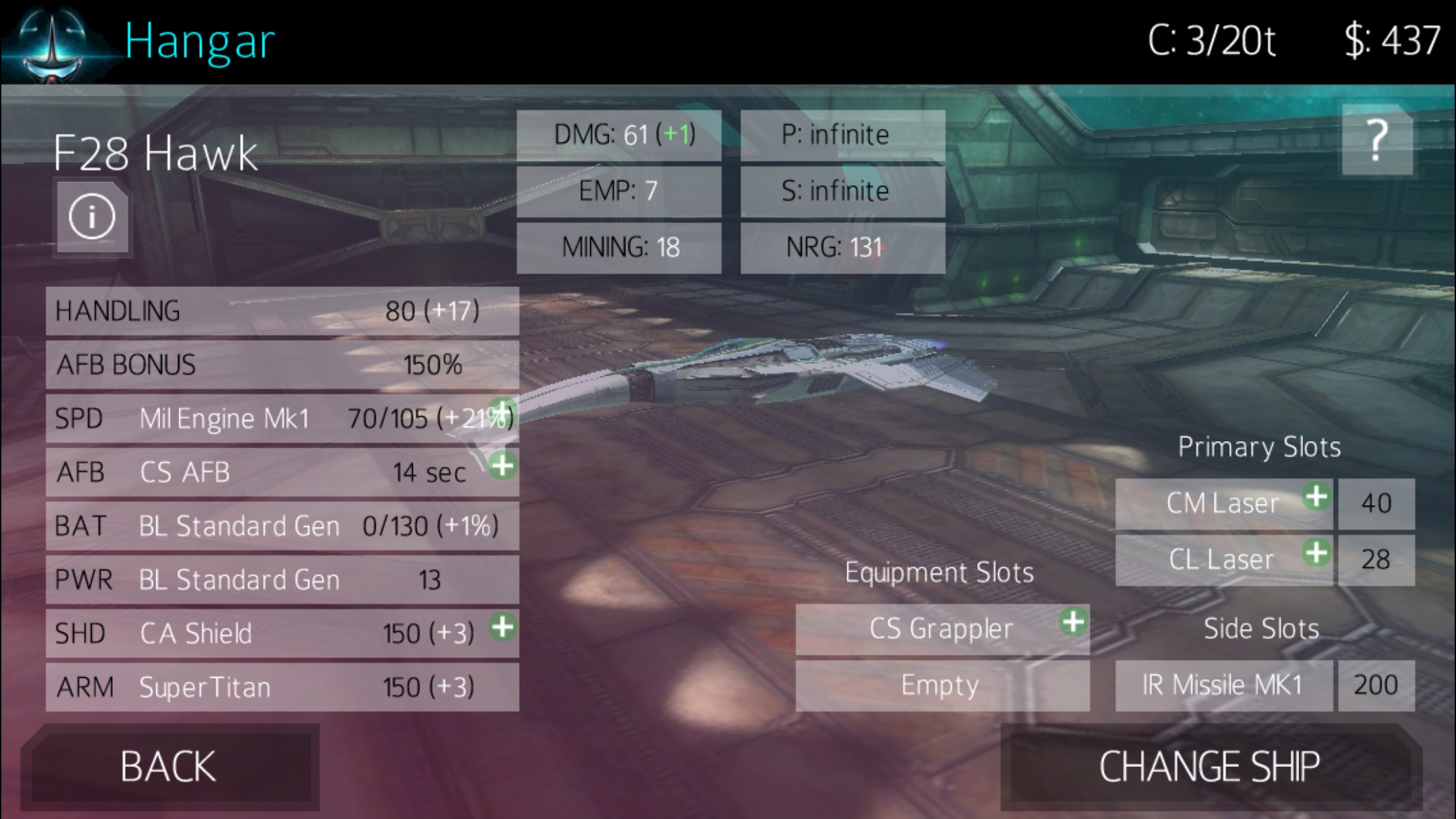 It’s pretty fun powering up your ship over the course of the game. There are lots of parts you can upgrade, and you’ll often have to swap pieces around to specialize for certain jobs. When you get enough credits together to buy a new ship, it feels like you’re really moving up. Naturally, you’ll have to hunt around various stations to find the best parts. In fact, you’ll spend a lot of time going from point A to point B in Stellar Wanderer, and since space tends to be pretty big and not so densely packed with stuff, that means you’ll be pointing yourself at some distant way-points and tapping on your afterburners pretty often. Fortunately, the game provides a speed-up button that ensures no trip takes more than a minute or so, and you’ll almost certainly run into pirates at least once during any journey.

You have your choice of control methods in Stellar Wanderer, and though it seems to want you to use tilt controls, I found it more enjoyable with the virtual stick option. Your mileage will vary, I’m sure, so it’s nice to have that option. The game can sometimes be a little bit weird with its targeting, so you might have to manually tap on enemies to lock in on them if it’s decided to target something else instead. It’s a relatively minor bother in the scheme of things, though. You can choose to anchor the virtual stick or have it float, invert either axis, and select between a behind-the-ship or first-person cockpit view. The game supports Game Center achievements, and it’s a pretty solid list if that’s the sort of thing you’re into. There are no IAPs of any sort in the game, either.

Stellar Wanderer is good more often than it’s great, but it’s still quite easy to lose hours to the game thanks to its solid, time-tested core. Taken as a sequel to Strike Wing, it’s a major success, expanding on it in almost every way and offering a much bigger experience for your money. It’s probably not going to replace Galaxy On Fire 2 as the king of the genre on iOS, but if you’ve got room in your heart for another good 3D space-trading adventure, you’ll get a lot of enjoyment out of Stellar Wanderer. I wish there were a little bit more to the combat system, and there seem to be a few bugs left to squash, but apart from that, it’s a solid, substantial effort in a genre that’s seeing fewer and fewer new entries on iOS as time goes on.