So, you’ve read our guide to starting out in Clash Royale (Free), and you’re looking to get better. Well, we’re here to help. If you want to make the leap to being a better player, here are some key tips that will help you get the advantages in battle that you need.

Join and participate in a clan

You can’t do this right as you start, but you should get in a clan as soon as possible. The big reason for you is that you can request for other members in the clan to give you cards that you already own. This can help you out a lot on the way to upgrading a card you use a lot, particularly if you use something like the spear goblins or arrows. People who don’t use them often have tons of them through opening chests where they’re a common card. They’ll be happy to give them up. Giving is also receiving as you earn gold and experience for giving up your cards. So, the more you participate in giving away your unwanted cards, the more benefit you get. 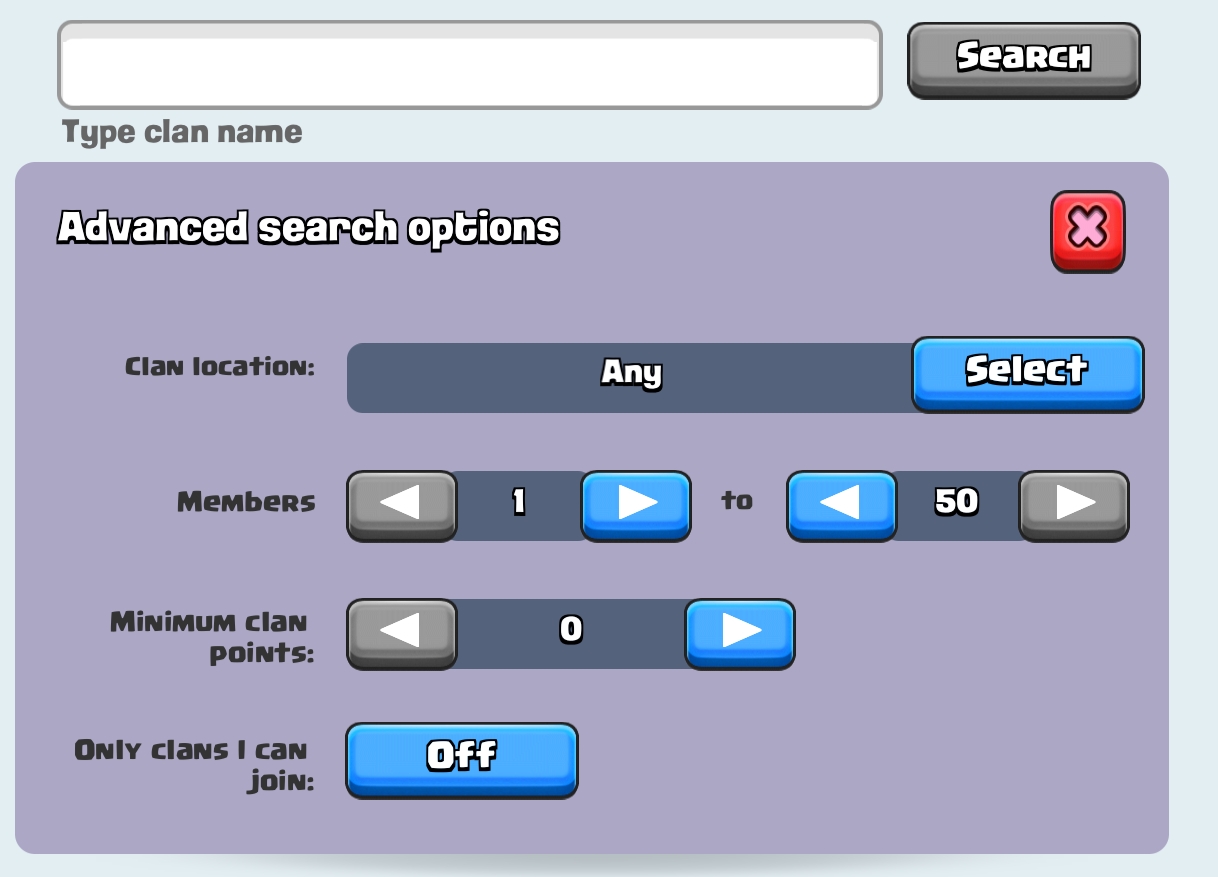 You can request cards once every 8 hours, and you can get either 10 common cards or 1 rare card. Epic cards can’t be requested. Be wary when requesting a rare card; people will be slower to give these up and you might be wasting a card request opportunity. Chat with folks, see if there’s anyone who has one to give up. And do note that I myself have checked to see if someone requesting a rare card is an active member of the clan; the member roll shows how many cards you’ve given out recently. So have some decorum with requests.

If you need a clan, well, we have a forum thread where you can find some clans with fellow TouchArcade readers to play with.

Learn the importance of card countering

Every card in the game either has a counter, or comes at a high enough cost that it can only be used in certain situations. This is true for most units; countering spells is tough, but they’re also only supplemental abilities and limit the number of units and attack vectors that a player has. That’s not to say that everything is perfectly balanced, but that nothing in Clash Royale is an instant-win trump card.

For example, the goblin barrel is particularly annoying, but it can be countered if you have arrows or fireballs on you. Same with minions; they’re annoying if you have nothing good as far as air units go on you, but arrows can be useful. Knights are annoying, but drop a skeleton army within range of your towers, and they’re harmless. Units that attack buildings can be distracted and weakened if you have a building card that you can use to lure them away from your crown tower. Even cheap buildings can be useful to save your tower from damage. Distracting an enemy so that you can save your towers or set them up for quicker kills by using cheap units is a good way to get an advantage in battle. And if you can counter and then utilize that countering unit in an offensive strike, well, even better!

Get the elixir advantage in battles

The number one key to victory in the game is maximizing your elixir usage, and the value of that elixir. For example, think about a goblin hut. It’s a higher unit cost than just the goblin cards, but it can be a more effective use of that elixir, as its spawns until it dies can bring forth more goblins than the trio you’d summon. Plus, they can be more difficult to counter, as while something like a dragon could instagib a goblin trio, they’d be less effective against a goblin hut. Even the witch becomes a useful card, as she summons nuisance skeletons while also having good health and an attack that can hit air units. Use her wisely, and she’s a great value despite the 5 elixir cost. The value you get from your elixir is important, not just how many cards you can summon. After all, if raw unit summoning numbers were important, then you’d just go with all the cheapest cards possible.

And even in counters, there are way to get advantages. The arrows card can be more effective than the fireball card despite doing less damage. That’s because it can instantly kill a 4-elixir goblin barrel on your base, or the 5-elixir minion horde, despite only having a 3-elixir cost. Now, you’re trading off the ability to do more significant tower damage, but the fact that you just nerfed a good mid-value card while spending less than your opponent did is a big way to get an advantage in battle. It adds up, and that can be important to winning, to summon more units because you kept winning the elixir battle. You can ultimately force your opponent to be on their heels if you can win these little elixir advantages.

Use the in-game economy to your advantage.

Gold is the currency used to buy upgrades for units. You get this through pretty much every chest. Gold costs increase for each card’s successive level, with the cards costing more, but you’ll want to upgrade as many cards as possible, as they give you the experience points needed to upgrade your towers to higher levels, doing more damage and offering more health. 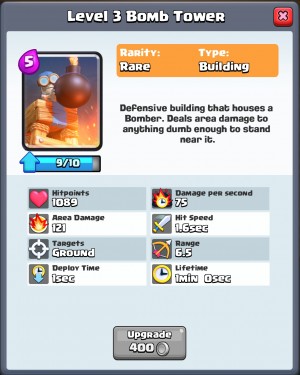 The way you have to look at it is that every chest is faster progression through the game. Now, each time you rank up, a new set of cards becomes available and added to the pool of what you can possibly earn from that chest. Some of the later cards are more powerful, so you’ll want to spend real money on chests as late as possible. Though, if you have cards that are in an earlier arena, you’re more likely to get them early on. The chests you win for victories are tied to the arena that you got them in. So, don’t be afraid to open a magical chest that you got early on, because it will be tied to the arena you won it in.

The most efficient progression without spending money on gems will happen through min-maxing of chest opening. That means opening your 6 free silver chests per day and your 1 free golden chest for crowns per 24 hours. You can store 2 free chests at a time, so you can open a chest before you go to sleep, and have 2 when you wake up. Also, if you miss a day on the crown chest, you’ll often have another one to work toward opening up.

While you can rank up higher or experiment with decks while you play with full chests, don’t expect to progress too far without dropping gems to speed up the opening of your chests. Then you’ll just have to play the game for fun (gasp) or for practice. This is actually a good time to experiment with other decks. You can swap between 3 different decks on the cards screen; if you just need crowns for the crown chest or want to pass time, experiment with alternate decks! The right card swap might be your key to victory.

As for gems, they’re the game’s hard currency, and they might occasionally be earned in a chest, but otherwise they’re a resource you have to pay for. Spending your money and gems on opening chests is the better use of your money than buying coins. Coins can be earned if you just wait, but sometimes if you have a particularly expensive card upgrade, then it might be worth it in order to focus your progression. But I’d only do so for cards that you want to upgrade for tactical purposes. If you’re aiming on how to best spend your gems on general progression, use them on unlocking chests. The magical chests are very expensive (and the base one is only rarely earned from victories) but the epic cards you can get from them are lucrative. Even just upgrading a rare card is worth a massive boost in experience.

Decks are about balance. You don’t want too high of an elixir cost because it could be crippling to your chances of victory if you’re sitting there waiting on elixir to charge up to use one of your cards, all the while your opponent is wailing away on you. And you don’t want too many cheap cards, as they could just be useless against a good card. Finding the right balance between cheap cards to deploy when necessary and to cycle through your deck mixed with the powerful heavy hitters requires time, practice, and the formulation of the strategy that you want to use. Are you sitting back and playing defensive for small wins and draws? Or are you prepping for indefensible swarms and blitzes in the last minute? 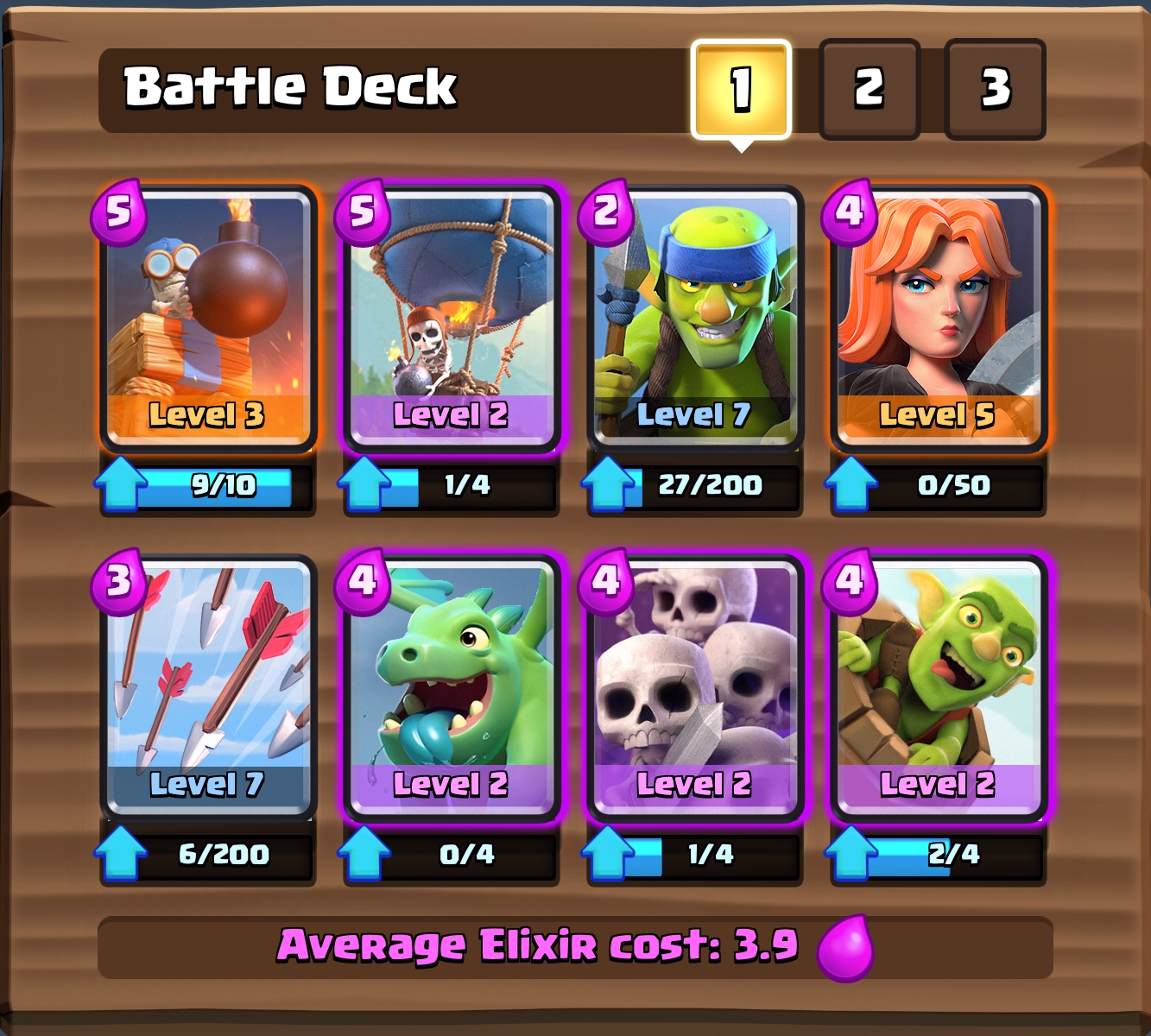 One thing to be concerned about if you prefer defensive play: you’ll need to analyze and update your deck often. Supercell has clearly stated that they prefer offensive play over defensive play, and cards that are strong on defense are liable to get nerfed while offensive cards will get buffed. So pay attention to every balancing change and don’t be afraid to make big, sweeping changes, because your deck might lose those key advantages it needs.

The right deck will depend on how you want to play, but the Clash Royale subreddit has some decks out there. And watch the featured matches for the decks that the experts use. There might be a useful way to deploy a card you’ve otherwise ignored.