Ellipsis ($2.99) feels at first like it should be a tilt game, taking place in a small arena and with all sorts of abstract shapes. Thankfully, it doesn’t – it would be awkward if it and Abzorb (Free) came out the same week – but instead is a touch-based game. And the touch part of the experience plays a major role. You move your blue circle around, trying to hit the blue targets, while dodging anything that’s red. Blue = good, red = deadly. But the game is all about dodging hazards while collecting the things you need to unlock the exit, while trying to perform as well as possible. It’s a game whose quality is pretty solid, but it reveals some clever things and does small things well. Ellipsis is a tough game to evaluate, because it might not reach the dizzying heights of the absolute best games, but its design is subtly brilliant, with few demerits. 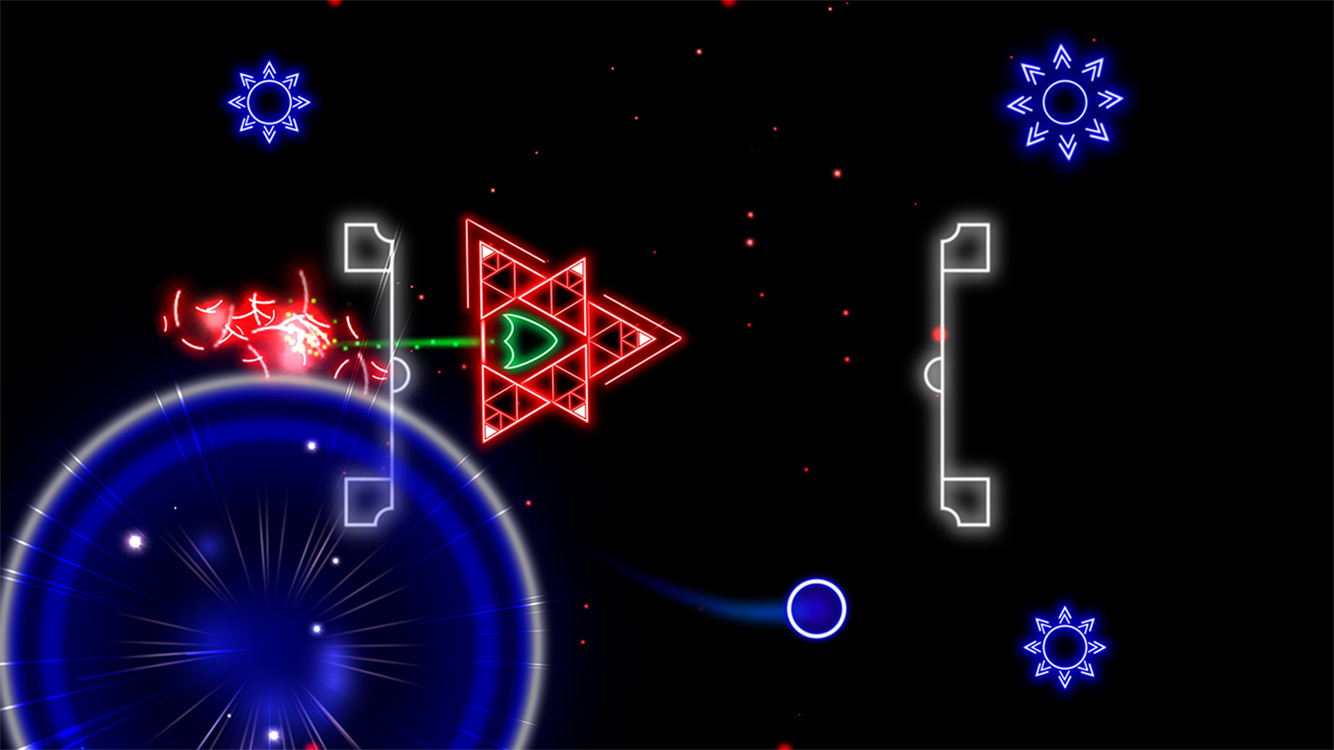 Ellipsis provides a fantastic amount of variety in its levels. The levels are all single-screen (with seamless aspect ratio changing) and small enough to be perfect for pick-up-and-play bursts. Some require more in the way of twitch reactions and fast movements, but the occasional time vortext levels prove to be rather challenging as well, as everything only moves when you move. The 120 levels should last you a decent amount of time, too. Ellipsis throws the occasional branching path in the world map at you. While they all get back to the main path in short order, they have a subtle but powerful effect on the game. They break up what could otherwise be a monotonous progression by giving the player a choice on where to go. It’s easier to explore more challenging level designs early on when players can avoid frustration by going to an alternate choice. Some branches give players the choice between one difficult level to progress through, or two less-challenging levels. 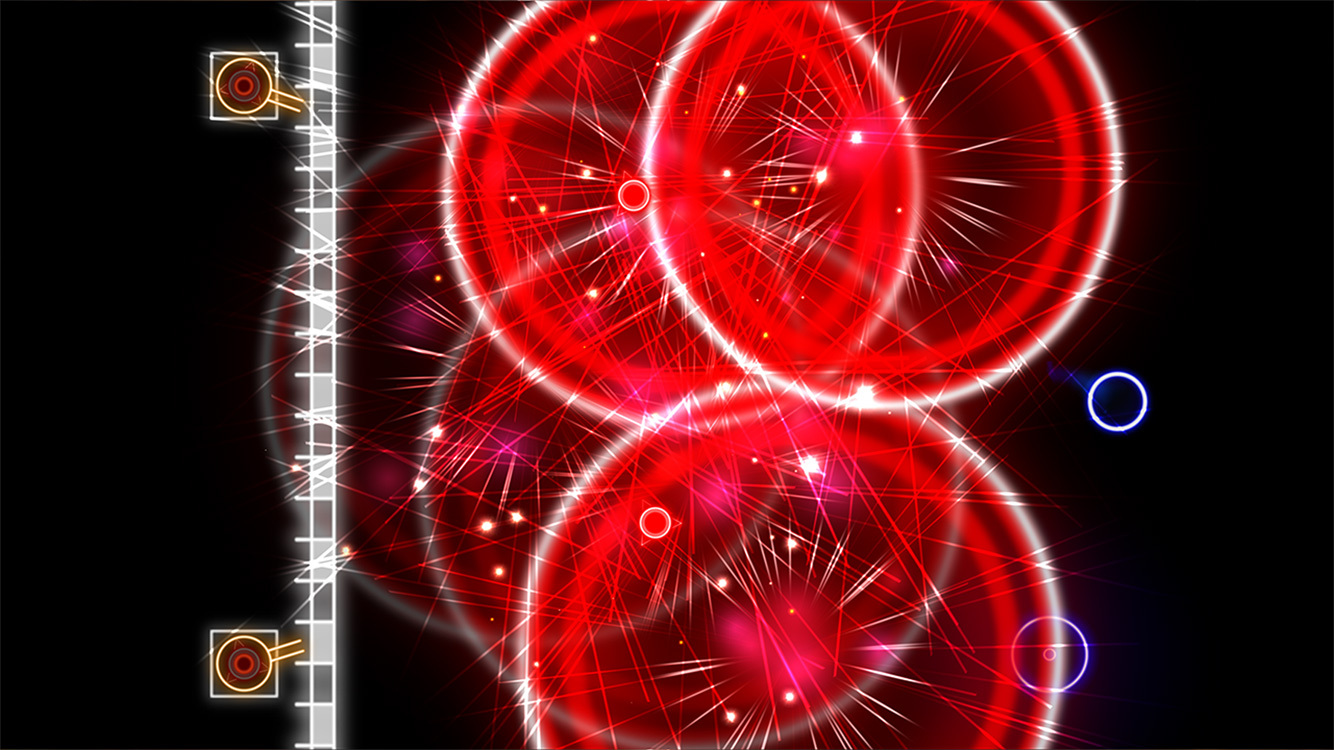 But the game does a great job at avoiding frustration by providing for instantaneous restarts when you die. You just tap and hold the origin point again, and you’re off. This also means that the game can throw surprise attacks right at the start without it feeling bad. It’s a balance: the game never asks for too much from the player. It’s self-aware of what it is and capable of.

The scoring and star system is unorthodox but works well. Each of the targets you go toward drops blue dots, and if you don’t hit the target exactly, the dots will go spread out in all directions. You will have to go back to pick them up, which is not possible in some levels with tight timing windows. So, you have to be quick, but accurate. Getting the first four targets opens up the exit, but there’s a tough fifth target to get. Plus, once you beat a level, then the fifth star opens up, earned by completing the level in a certain amount of ‘time’. Or, in this game, how far you move in the level. But it has the same practical effect as moving fast in real time. 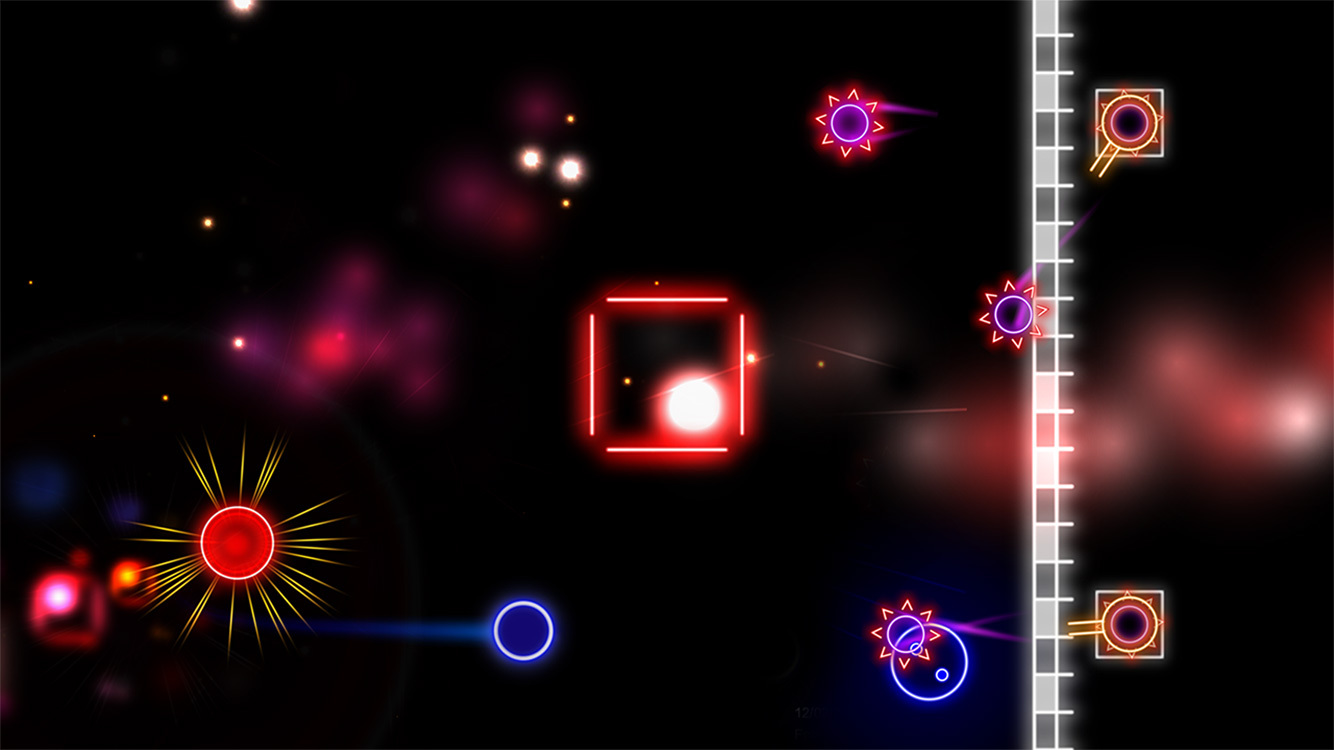 I do wonder if the time star would be better if it was just a separate star, though this system does challenge you to get all the dots in the most efficient manner. If you get perfect on the first four targets but skip the fifth one, you only get two stars, which feels a bit silly. The third star only is for doing well but messing up. Maybe the system could be simplified down to 3 total stars. But hey, this means that there’s like 600 stars to earn in total. Hard to go wrong with that.

Ellipsis features fantastic iCloud support, and I’m starting to think that maybe iCloud doesn’t suck any more. I’ve seen iCloud have all sorts of wonkiness over the years, and I rarely expect games with it o work well. But I’ve played several games now where the iCloud implementation is flawless, like this is the future and my progress shouldn’t be stuck on just one device. Ellipsis joins the crowd of games that do things right. And maybe it’s just developers figuring out what breaks iCloud syncing and what makes it work, but I’m getting to the point where I expect developers should include it. Of course, something will come along that is wacky with iCloud, but Ellipsis gives me hope.

The iCloud support means that I was able to test the game out on several different devices. Play this on your iPad if possible. It’s playable on iPhone, featuring 1:1 movement, but the levels take up a lot of the screen, so the game feels a bit easier when you’re not blocking large swaths of the iPhone screen. Still, it handles quite well no matter what, thanks in part to the game only moving when you move. There’s no twitch reactions, just smart paths.

The visuals in Ellipsis are of a minimal glowing style, but they look quite good. Visual effects that come into play the further you get into levels takes the style from being just utilitarian to being quite good, a skilled design. And that’s representative of the whole package. What seems utilitarian on the cover is deep down made with great care, and it shows as you play it. Ellipsis has few notable flaws, and you’ll have a good time if you play it.