When you first lay eyes on Craneballs’ latest game Splash Cars (Free), there’s a good chance the phrase “Pako ($1.99) meets Nintendo’s Splatoon” might come to your mind. And let’s face it: if it didn’t have the painting gimmick of the latter, the game would probably be little more than a clone of the former. In my mind, though, I can’t help but see the 1998 film Pleasantville. It depicted a black and white town from a fictional 1950’s TV show, and how the characters (and town) slowly begin turning multicolored as they are introduced to the messy, complicated joys of real life for the first time. Certainly going on a high-speed chase would have counted, right? 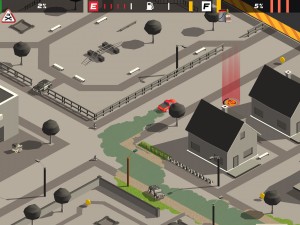 Pleasantville may not have been on the minds of the developers while they made Splash Cars since the movie has been out of the public consciousness for nearly two decades (oh God I’m getting old), but I like to think it was. It’s just fun to pretend I’m enlightening all the little black and white towns with my rebellious high-speed joyrides through blocky suburbia rather than what I’m really doing: dumping hundreds of gallons of paint on the street and causing thousands of dollars in property damage while trying to get away from the cops and (most likely) a lengthy jail sentence.

Anyway, if you’re picturing the aforementioned Pako while I’m ranting about all this, you’re pretty much right on the money. You’re given control of a tiny car in a tiny square town, and all you need to do is tap the left or right sides of the screen to steer while the vehicle auto-accelerates. There are police cars that chase you when you get too close to them, but they seem fairly weak and don’t make much difference in the first few levels. The real goal, of course, is painting. 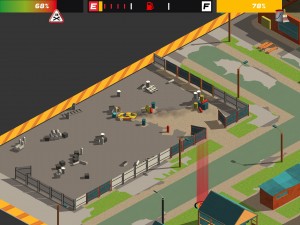 Here’s how it works: There’s a constant stream of color pouring out of the back of your car at all times, essentially leaving a vibrant trail over the grayscale environment wherever you go. It’s not just random colors, though; rather, it’s more like there’s a normal, full-color town under a black and white matte and you’re just uncovering it when you drive. When you get close to an object you can’t drive over (like a house, tree, or parked car) it will automatically bloom into color as if you dumped a giant bucket over it.

On paper it sounds like nothing more than a gimmicky little twist on a game that’s largely still Pako, but I was surprised at how different that twist makes the whole experience feel. For instance, you have a limited amount of fuel so you can’t just take your time and drive wherever you want forever. This means you have to choose your routes carefully as you try to efficiently paint as much of the level as you can–without going over the same areas twice–before sputtering to a stop after a few minutes. 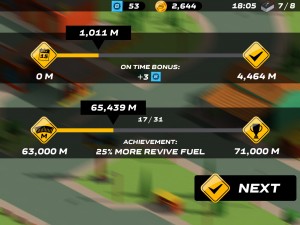 There are a few other clever additions to the gameplay that help the game feel a bit more unique as well, like the lawn mowers and street cleaners that can drive around and paint for you if you get close enough to “capture” them. It’s a good idea to chase them down, too, because they have a nasty habit of erasing some of your progress if you don’t catch them in time. There are also power-ups that randomly spawn around the levels that will do anything from freeze the police to turning you invisible. (That last one is really more of a nuisance, though.) Rounding things out are green fuel canisters that make you last a bit longer and coins that can be spent on new cars.

The game also has a pretty smart progression system, with three rewards in each level based on how much of the area you are able to paint over. For example, on Map 12 you can unlock the next map, get 350 coins, and permanently add one slot to the energy timer if you manage to cover 80%, 88%, and 92% of the level, respectively. There are also over 30 rewards based on how far you drive total, like 20 extra seconds added to the magnet powerup for driving 500,000 meters. Finally, there’s a daily goal to shoot for as well to ensure that you always have something to accomplish even when you’ve finished the game. 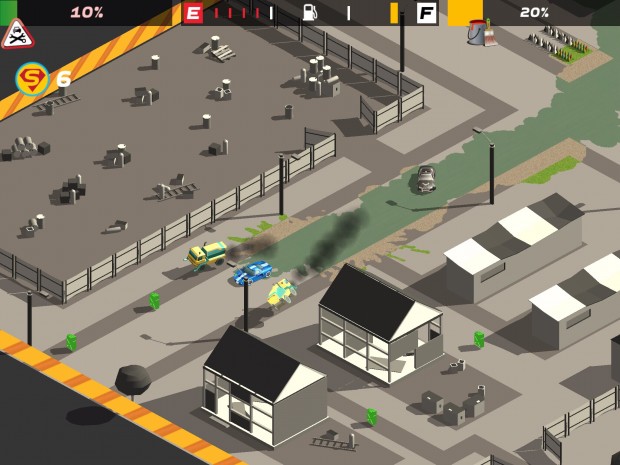 Of course, this being a free-to-play joint, finishing the game is kind of a tall order. I’ve already alluded to an energy system, but it’s not too bad. Sure, it feels quite restrictive when you can only play six rounds at first, but eventually you’ll unlock more “batteries” and be able to play much longer. In fact, I currently have around nine and I’m honestly starting to have trouble depleting all of them. For the first half of the game you pretty much always have enough coins and cars to complete every goal you come across, but it starts getting tougher after that. Some of the meter goals in particular seem almost impossible at this point, as they go all the way up into the millions and I can’t imagine how many weeks of heavy playing that could take. Still, the meter goals in particular are not required to progress through the regular campaign of maps, and I’m actually glad they get tougher as it means I’ll have plenty of things to shoot for if I’m still playing into the future. Oh, there are also ads every now and then, but you can remove them with any purchase of coins.

When I originally sat down to play Splash Cars, I certainly didn’t think I’d have quite this much to say about it. I mean, this review is probably approaching a half Musgrave or more. Hopefully that fact alone will allay any concerns you have over this being a simple clone of Pako, which admittedly is very much what it looks like on the surface. And sure, if you took away the painting mechanics, that’s pretty much all it would be. But those mechanics are so cleverly implemented that it honestly doesn’t feel that close to any of its obvious inspirations while you play it, and that’s a very good thing indeed. Its various parts may not be terribly original, but the whole package together is a surprisingly great experience–especially for being free. I’d say that’s worth painting the town red over.