Craneballs’ Splash Cars (Free) may look like a version of Pako – Car Chase Simulator ($1.99) with a little Splatoon thrown in, but it definitely stands on its own. I gave the game four stars in our review, and I’d happily do it again. (If for some reason I had to review the same game twice. That’s weird though.) Unlike Pako or Splatoon, though, Splash Cars is very much a free-to-play game. It has timers, dual currencies, ads, and plenty of grinding. So what can we do about this?

Well, you could always buy a small coin pack (which will also remove ads) to jump-start your progress, but not everyone is rich like that. So here’s a guide to get the most out of this sweet little game without parting with any of your hard-earned dough.

In Splash Cars you take control of a little car whose job it is to paint over the boring grays of 20 different maps. All you need to worry about is hitting the left and right sides of the screen to turn since the game auto-accelerates for you, and from there you just drive over as much of the environment as you can before running out of fuel.

The trick to getting a high percentage of the map covered (and thus unlocking more cars, maps, and cash) is efficiency. The main thing to remember, then, is to not go over the same areas twice, since you have a limited amount of fuel and you don’t want to waste it double-painting. With that in mind, here are some tips: 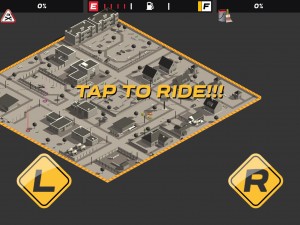 – Always study the map before driving. If you wait a second, the camera will zoom out and show you most of the environment before you start, which is invaluable for memorizing where gas cans, power-ups, and lawn-mowers are. (More on that stuff later.) You can effectively plot out your first 20 seconds or so from that information, and a strong start can easily be the difference between hitting the level goals in style and being one or two percent shy.
– Along the same lines, you might want to see where most of the gas cans are located at the beginning and try to first paint as far away from them as you can. That way you won’t pick them up too early and risk not using their full potential. Once you start getting low on gas, make your way over and grab yourself a second wind.
– My favorite method for tackling most maps is to start painting the outsides first and slowly spiralling toward the center. That way there’s a greater chance of encountering the street cleaners that hang out around the edges, and the earlier you can “capture” these vehicles the better.

There are three types of vehicles in Splash Cars: police cars, your own cars, and capturable vehicles (mowers & cleaners). Well, there are parked cars as well, but they’re basically just obstacles to be painted.

Capturable Vehicles
One of my favorite parts of the game is the inclusion of lawn mowers and street cleaners. At first they are kind of a nuisance since they act as wandering erasers, undoing large amounts of progress if you let them.The clever part is, if you drive close to them you can convert them to your cause and make them paint for you, Tom Sawyer-style. As a general rule of thumb you should chase down any you see as early as possible.

Street Cleaners: These big vehicles tend to appear and disappear around the edges of the map, and they like to paint (or erase) in straight lines along the outside of town. Fortunately, this means they are very predictable. Go get ‘em!

Lawn mowers: These little dudes are far less predictable. They seem to have a mind of their own, and can be found just about anywhere–including zipping through people’s yards. (That’s their purpose, after all.) Luckily you can use the above trick of hesitating to get a clearer view of the map before starting your run so you can memorize where the mowers’ start locations are. 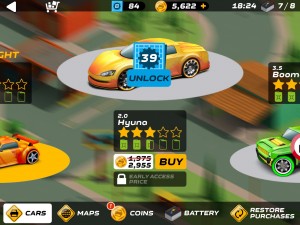 Your Cars
The further into the game you get the more you’ll be unlocking new cars. You can always unlock the next one early for a significant hike in price, but it’s usually best to save your coins and wait until it’s gone down to its normal price. Definitely focus on goals that unlock new cars, though, because pretty much each one is better than the last, either fuel-wise, speed-wise, or handling-wise.

Police Cars
These are the villains of the game, but at first they aren’t much more than an annoyance buzzing around you. They’ll bump into you and raise your damage meter, but as long as you don’t deliberately hunt them down you’ll probably be fine. The percentage goals definitely get more challenging in the later maps, though, which means you’ll want to try harder to avoid anything that’ll slow you down.

There are a number of different power-ups in Splash Cars that range from super helpful to weirdly irritating. Pretty much all of them can be upgraded, too, by completing meter goals. For example, if you drive 125,000 meters the Micromachine power-up will shrink you 25% more. Cool! Anyway, here’s a list of every power-up in the game and their upgrades:

Magnet: Pretty typical magnet power-up. Creates a ring around your car that sucks in gas, coins, and blueprints. Unlocks at 200 M. +20 seconds at 500,000.

Super Switch: This power-up will temporarily switch out your current car for one of the later, faster cars. You’ll be outrunning cops like a pro. Unlocks at 11,000 M. +10 seconds at 180,000 M. 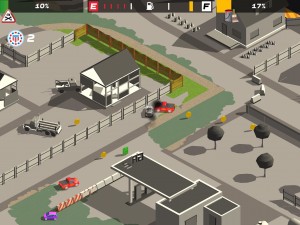 Cop Time: Definitely my number one fave. This one turns you into a cop, which sounds pretty lame since they don’t paint, but it also turns all the real cops into painter cars. Thanks, guys! Unlocks at 30,000 M. +13 seconds at 230,000 M.

Invisibility: The only one I really don’t like, the invisibility power-up turns you invisible. It hides you from the cops for a brief period, but it also makes it a lot harder to steer since you can’t see yourself. Unlocks at 45,000 M. +10 seconds at 300,000 M.

As mentioned at the beginning of this article, the game has many of the standard free-to-play monetization schemes. There are two currencies, an energy timer in the form of batteries, and opt-in video ads for continues. 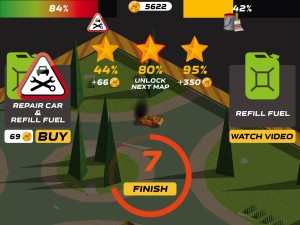 Currencies
– Coins: Coins are earned after every run and occasionally as rewards for playing every day, meeting specific meter goals, and completing various level goals. They can also be found scattered around each map, and it’s a good idea to grab them when you can. I almost always save mine for buying cars when they’re unlocked, but you can also spend a small amount at the end of your run to repair and refuel if you want to keep going. Keep in mind, though, that the amount you spend on that continue will keep going up the more you use it, so you should probably refuel with a video ad instead.
– Blueprints: This is the game’s premium currency, and like coins, blueprints can be earned as a reward for completing goals, and they’re also found around the map on occasion. You can spend them on unlocking cars sooner, but you don’t really need to. I’d save ‘em just in case Craneballs adds more compelling things to spend them on.

Batteries
When you first start the game you’ll have six batteries that deplete one at a time for each run. Each one takes 20 minutes to restore, which sounds like an eternity, but luckily you can get more batteries. And I’m not talking about refills (although there are those as well); I mean you can get more permanently. Some level and meter goals will reward you with +1 battery, and making that a priority whenever you can is definitely a good idea. I currently have 9 batteries, and I feel like I can play a pretty good amount before running out.

If you’ve been enjoying this game as much as I have, hopefully you’ll find some of these tips useful. Of course, if you’ve been really enjoying it, chucking the devs a few bucks to remove ads and get some coins isn’t a terrible idea. We all gotta eat! For everyone else, be sure to head to our forums to share your own tricks for making your way through Splash Cars without spending a dime.