Adventures Of Mana ($13.99) is a remake of a classic Square Enix game, something that could be said for more than half of the company’s iOS releases. Yet it’s quite different from the usual Square Enix remake in that it’s positively restrained in how much it chooses to change from the original game. It’s especially interesting in light of the fact that said original game, Seiken Densetsu/Final Fantasy Adventure/Mystic Quest (henceforth Final Fantasy Adventure), was a 1991 release for the original Game Boy. On top of that, there was already one high-profile remake of the game, 2003’s Sword Of Mana for the Game Boy Advance, which changed and added in a lot of things. Seeing Adventures Of Mana essentially present an early handheld action-RPG without doing much more than re-rendering everything in 3D and cleaning up the translation is certainly unexpected, but it’s also most welcome. 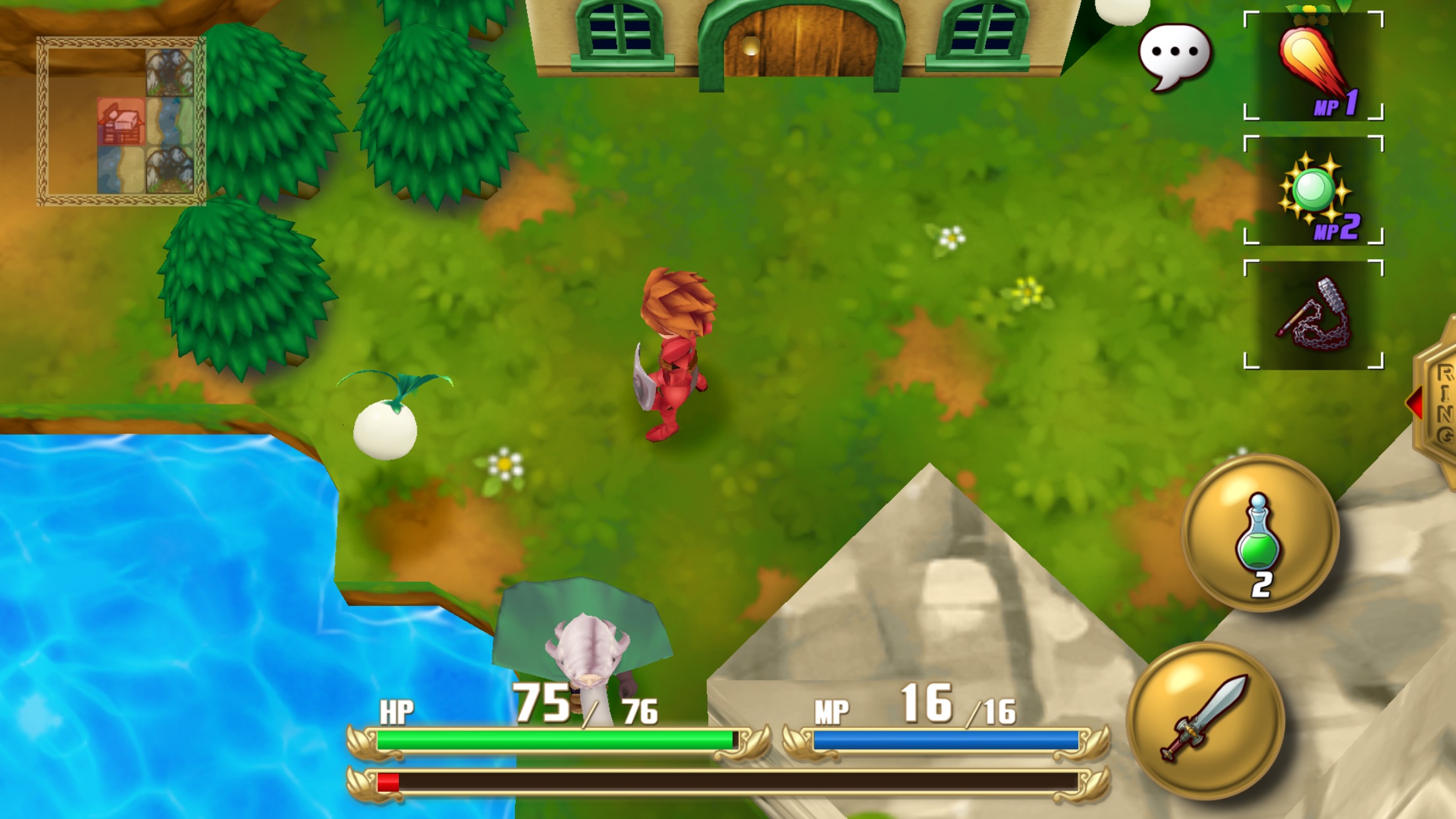 You see, for whatever failings Final Fantasy Adventure had, one of its key strengths was in how straightforward and quick-paced it was. It has a story, of course, and that means it occasionally needs to stop for characters to exchange some dialogue, but it’s all quite efficient. Such is the case with the gameplay, as well. While it technically takes place in an open world, you’ll be walking a very linear path within it, and side trips rarely yield much of worth. There’s only ever one way forward and almost never a reason to go backward, so if you got stuck anywhere, you knew there was something in the immediate environment you were likely overlooking. There were no sub-quests to speak of, and the mechanics didn’t stray far beyond hacking and slashing with your weapon of choice, solving the odd switch puzzle, searching for hidden doors, and choosing a stat distribution upon each level up. That underlying efficiency was likely a happy accident resulting from technical limitations, but it worked out well for the game. Final Fantasy Adventure remains one of the more enjoyable games from the first several years of the Game Boy’s lifespan, and I attribute that chiefly to its simple, satisfying design.

That little Final Fantasy spin-off proved popular enough to launch a series, one that would do more world-building and add more complex systems with each new installment. When it came time for the Mana series to revisit its roots in 2003, its handlers seemed to have forgotten what made Final Fantasy Adventure such a great game. Sword Of Mana still has the same skeleton as the original game, but to no one’s surprise, Square Enix opted to graft on excessive story elements, copious amounts of banal dialogue, and needlessly-complicated sub-systems. It’s not a bad game, but it certainly served as good a symbol as any of how the company had changed in that decade. It was also a firm reminder of how the Mana series creators and its fans appeared to be on completely different pages as far as what they wanted the series to be. 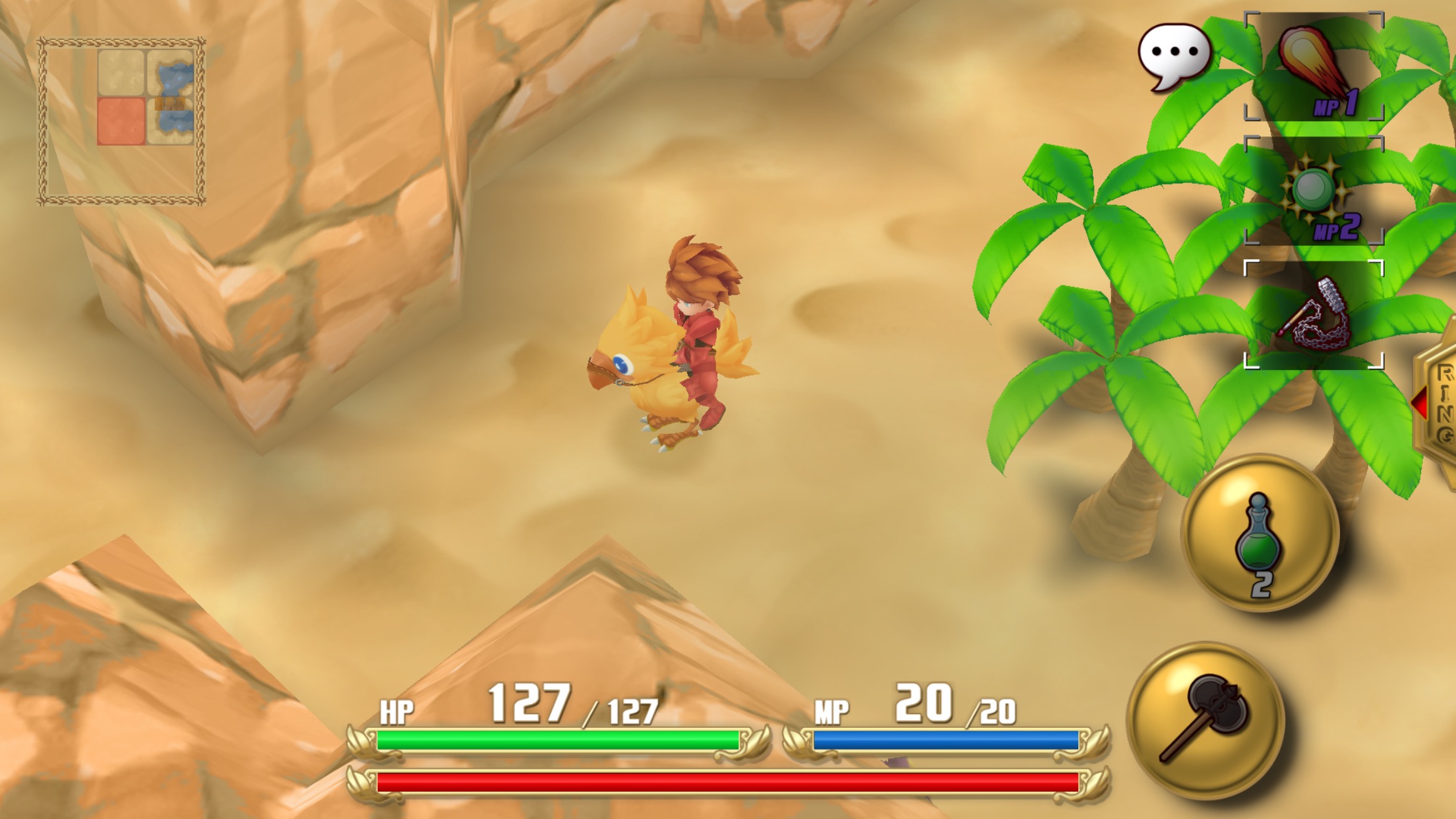 I’m not sure, then, what it says that Adventures Of Mana plays it safe to an almost absurd degree. None of the cruft that felt like it was suffocating Sword Of Mana is present here. Where that remake took about 20 minutes before it stumbled its way through its story set-up, Adventures Of Mana drops you into battle immediately after the initial plot scroll, and plops you out into the world without much supervision or training at all after about five minutes, just as Final Fantasy Adventure did. That game trusted you, perhaps because it had no choice but to do so. Adventures Of Mana could have done things differently and made sure the player knew exactly how to do everything before it took off the training wheels, but it chooses to follow the suit of the original and put its faith in you. It’s a risky move in 2016, and it sometimes doesn’t work, but on the whole, it’s strangely refreshing to play a game like this from a company of Square Enix’s size.

One of the main reasons it can get away with that is because of how well the game keeps things simple. As mentioned earlier, this is a game where you’re moving linearly through an open world, where your next goal at any given time is the only new place you can reach. Its dungeon puzzles are similar to those found in the original Legend Of Zelda game on the NES, mostly concerned with tripping switches to open doors or stairways, destroying walls to open secret passages, and using keys to unlock doors that block your path. It’s a bit more complex than that game, allowing for multi-floor dungeons and making use of switches, but in terms of puzzle design, the feel is almost the same. That goes all the way down to being able to load up on keys and wall-destroying objects (here a mattock rather than a bomb) from shops outside of the dungeon to short-circuit your way past whatever the original intended solution might have been. It’s a bit sloppy and it can feel pretty annoying when you run out of mattocks or keys mid-dungeon and have to farm up some more, but most of the time it makes for simple, methodical progression. 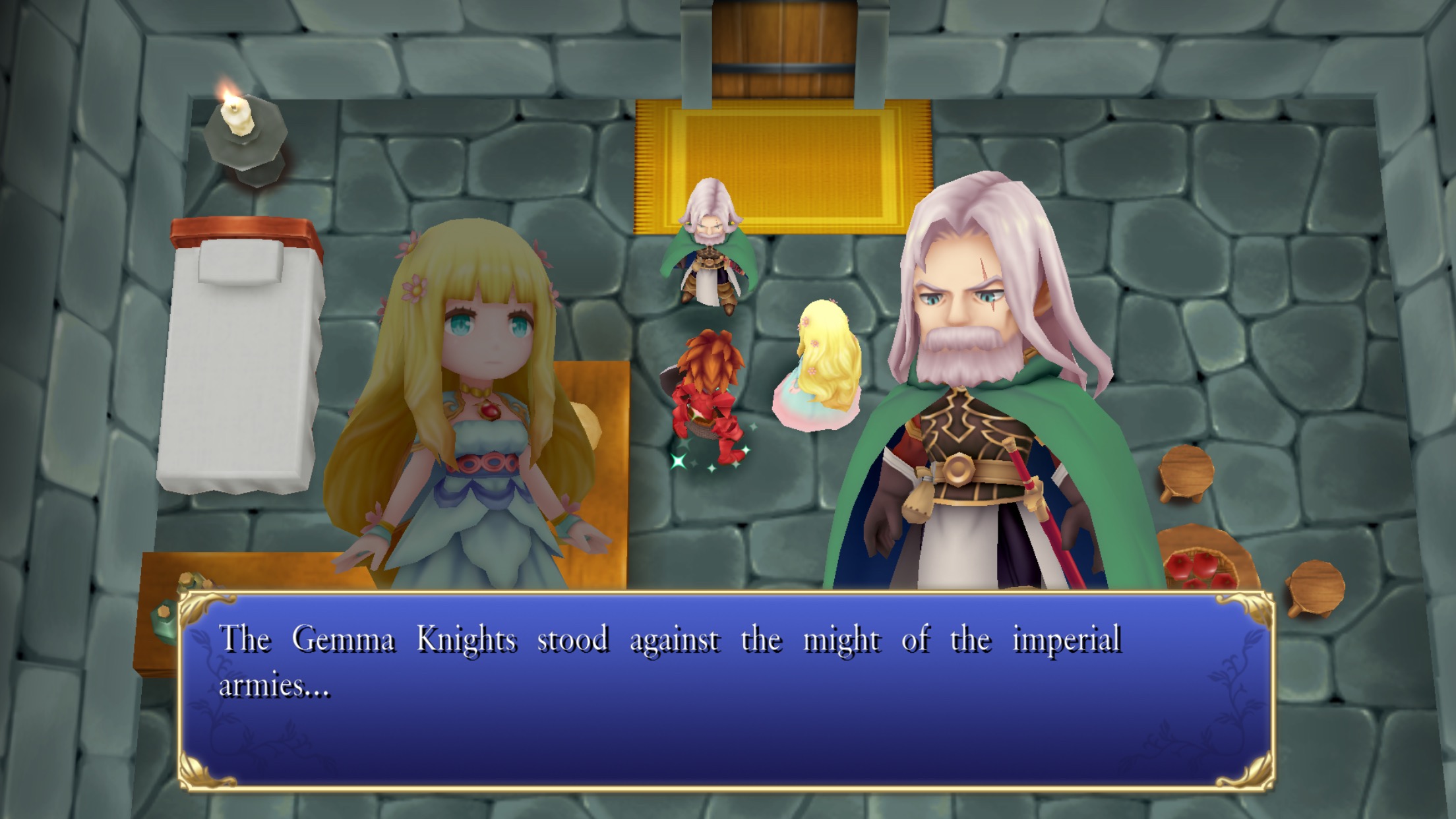 Outside of the dungeons, your march forward is fueled either by finding a new item that allows you to pass an obstacle, such as a grapple chain that allows you to cross certain chasms, or by helping out an NPC in some way. As a consequence, you’ll be getting new toys to play with fairly steadily throughout the first two-thirds of the game, which helps keep the relatively simple combat system from getting stale. As in its more famous sequel Secret Of Mana ($7.99), there are many different weapon types you can find and use in Adventures Of Mana, each with their own style of attack and special ability. You can perform simple canned combos by hitting the attack button repeatedly, or wait for a meter to fill up in order to deliver a powerful super move. You’ll also learn magic early on, giving you an alternate means of attacking. Magic points are limited enough that you can’t really go to town with your magic, however, so you’ll probably only use it for curing and solving the odd puzzle. Sadly, attacks have about as much impact here as they did in the Game Boy version, so you don’t get the same satisfying thwacks and thunks that Secret Of Mana used so well to drive home your hits.

Its adherence to its source comes off oddly in certain cases. Emulating the original game’s method of scrolling one full screen at a time is one thing, but the accuracy extends even as far as having the enemies pop into place a brief second after you move into a new screen. The problem here is that unlike in the original game, there’s no period of immobility when you move to a new screen, so you’ll often walk right into spawning enemies until you realize you have to sit tight and let them pop. The 3D graphics make it less clear where the boundaries of the screen are, too, so you might accidentally move into the next screen mid-battle if you’re not paying careful attention. Though you’re able to move and aim your attacks in all directions, the game is still built heavily around the cardinal directions, making it trickier than it should be at times to hit certain objects or enemies. These are relatively minor issues, however. For the most part the game plays as well as it always did, a fine action-RPG that falls somewhere between the blistering pace of Ys and the more considered action-adventure found in Zelda games. 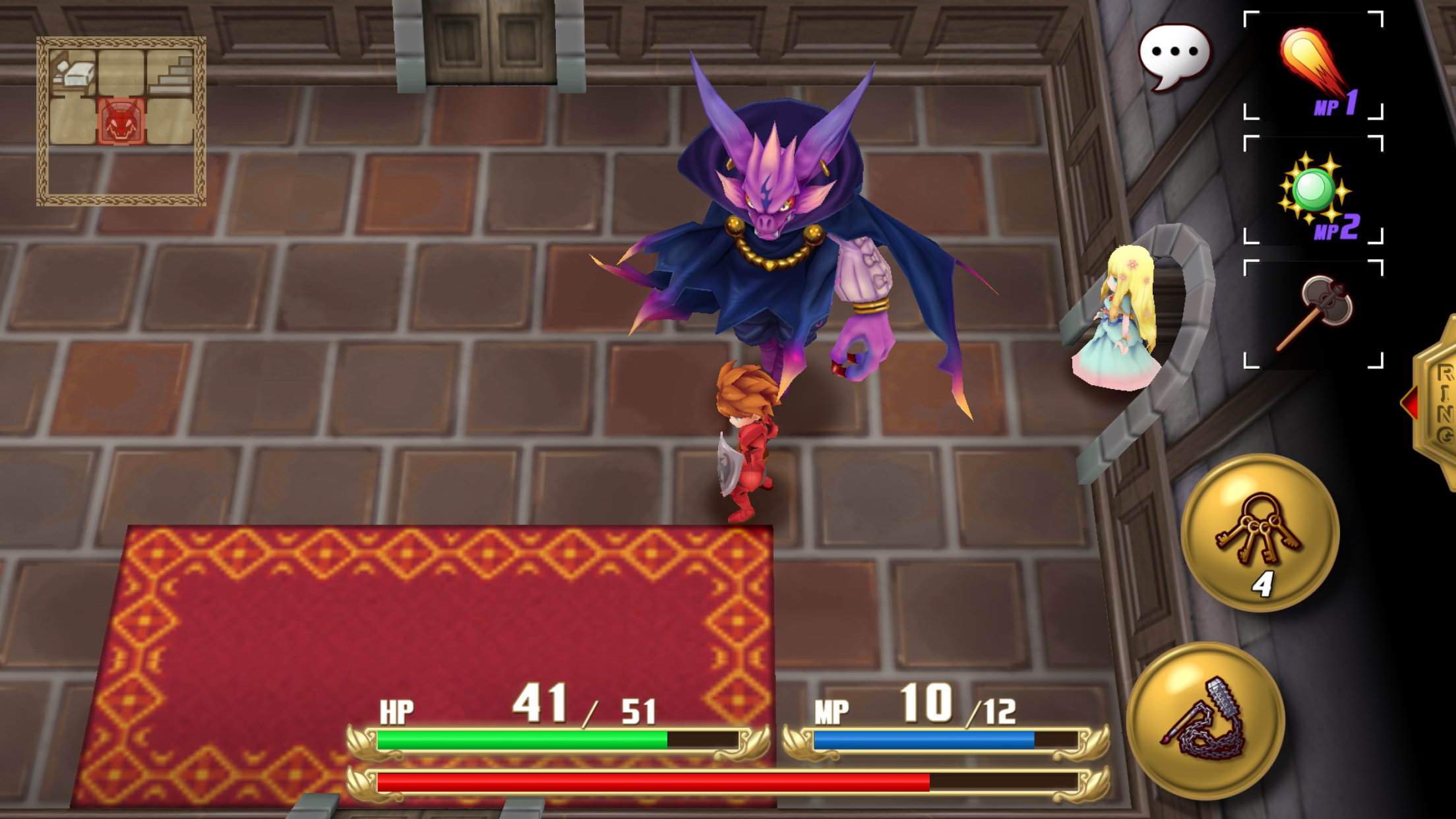 The one area where Adventures Of Mana seems comfortable making big changes is in its presentation. No longer a simple black-and-white 2D game, Adventures Of Mana uses fully-polygonal graphics to bring the world to life. The monsters particularly benefit from this, as they look fantastic in their new, well-animated forms. I’m not sure if I’m as keen on the art direction for the people, but the character designs at least look better than they did in Sword Of Mana. The arranged soundtrack is simply outstanding. Final Fantasy Adventure always had great music, keeping the Game Boy’s limitations in mind, but Kenji Ito’s score gets to run free in this version of the game with impressive results.

Other changes include a slightly-unreliable auto-save feature, Game Center achievements, and a new control system for those playing with touch controls. You can use an MFi controller if you have one, but if you don’t, you shouldn’t have too much trouble with the touch interface. A floating virtual stick moves your character, two virtual buttons handle attacking and using items or magic, while three extra virtual buttons at the upper-right portion of the screen let you have three more weapons, items, or magic spells at your disposal. It’s an incredibly useful addition that saves you from having to dig around in your inventory quite as frequently as you have to in the Game Boy version. As in the original game, you can make a manual save at any time, something you’ll want to make full use of in light of the auto-save’s occasional bits of bad judgement.

Evaluated as a remake, I’m not sure if I could be much happier with Adventures Of Mana. Taken as a game on its own, it has a few flaws and its traditional approach to guiding the player is likely to rub some people the wrong way, but it’s nevertheless an excellent action-RPG that has stood up well to the test of time. I guess the tricky point for most is the price, which is relatively high for a game that ends in 10 hours and offers little incentive for replaying it beyond the sheer enjoyment. In all honesty, it’s probably not the best bang for your buck in this genre on iOS with games like Oceanhorn ($7.99), Ys Chronicles ($4.99), and even Secret Of Mana around at far lower prices. But I absolutely believe it’s worth adding to your library if the price difference isn’t a concern for you. It’s a great game, and I’m happy a new generation has a chance to experience it as it was originally designed.