Foursaken Media is undoubtedly one of the most beloved developers on our forums. They are well known for making games that take several different genres and throw them into a blender, and the resulting smoothie is usually quite tasty. My favorites are probably Block Fortress ($1.99) and Bug Heroes 2 ($1.99), but even the games that don’t quite stick are usually pretty interesting if nothing else. It was with some surprise, then, that I learned their newest game All Is Lost (Free) was essentially just a runner. A runner with… puzzle elements? Extensive RPG-like upgrade trees? Monster collecting? Base building? Nope, literally just a runner. You go from the left side of a level to the right and basically just swipe to avoid stuff. What’s truly surprising, though, is that even though they apparently dropped their modus operandi of idea-mashing, they were still able to create a compelling and fun game rooted firmly in a single genre. 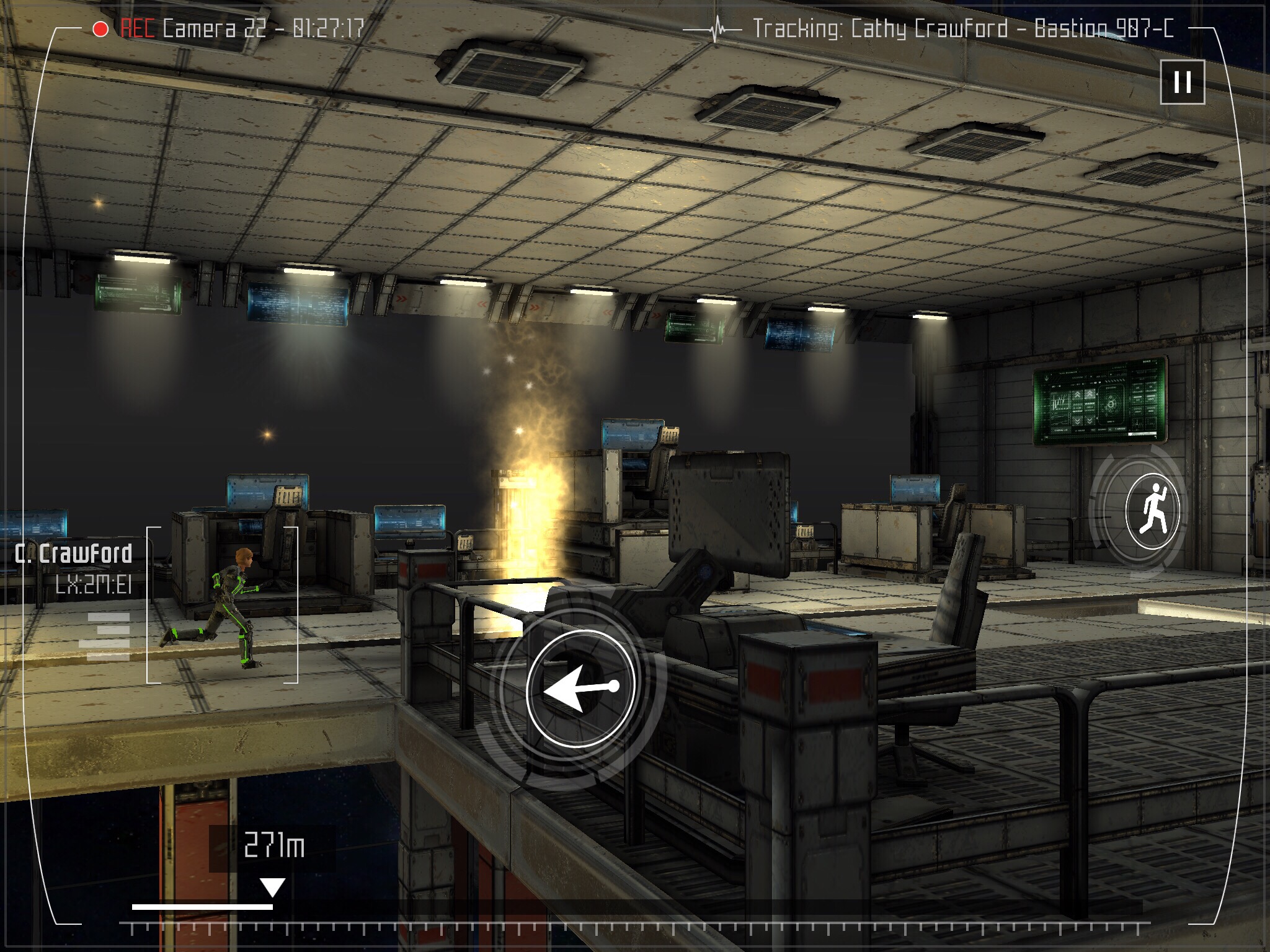 If you’ve played games like Le Vamp (Free) or Joe Danger ($1.99), you’ll feel pretty at home here. The basic premise is that there are a bunch of ships being destroyed in some kind of giant space war, and your job is to direct the crew members of these ships to the exit pods so they can escape. One at a time you’ll take control of an ensign, captain, scientist, or whoever else needs saving and they’ll auto-run from left to right while you swipe the screen to avoid various obstacles.

The game also feels a bit like Wind-Up Knight (Free), since the game is designed around holding your device with two hands in landscape orientation. A swipe up or down on the left side of the screen will make you jump or roll, and a swipe in any direction on the other side of the screen will generally trigger actions in front of you to clear your path. For example, sometimes a door will have an up arrow over it, in which case you swipe up to open the door. Other things you interact with in this way are vents, cranes, and platforms. It’s a system that feels natural and responsive, and all the ducking and leaping around reminded me of the fun times I had years ago with Mirror’s Edge (RIP) on my iPhone. 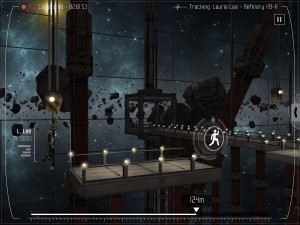 The game has a fairly typical Foursaken visual style, but this time obviously with a spaceship theme. Everything is crisp and fluidly 3D, with a mostly dark color pallet broken up occasionally with giant glowing screens and explosive vents. Overall it’s a little generic and most of the characters are largely indistinguishable from each other, but it works anyway and sets the gritty atmosphere nicely.

One way the game steps outside the box a little is the interesting way it handles level progression. Each stage is essentially one massive ship, and you’re given a list of around 7 crewmembers that need saving. You can tackle them in any order by tapping their name before beginning. Once you do, you’ve got a few chances (lives) to save each one, and if you use them all up that person is dead and you’ll have to move on to the next. The further down the list you go the fewer lives each crew member has, effectively raising the tension (if you tackle it in a linear order, of course). Once you’ve saved–or killed–the last one you’ll be graded by the percentage of how many escaped alive. If you get 75% or better, you’ll level up and be given a slightly harder ship to tackle next time. Otherwise you’ll just have to keep trying random new ships at your current level. 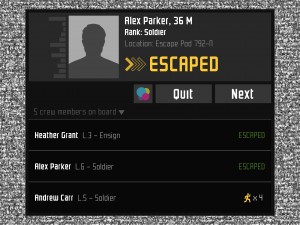 There are no upgrades or any unlockables like that, so if you get stuck you’ll just have to keep trying until you pass. Luckily there’s also an endless mode so you still have something a little different to try if you’re beating your head against the wall in the main mode. Aside from those two modes, there’s also a basic mission system that is essentially just a list of achievements (“Save 100 scientists!”, etc.) so you’ll always feel like you’re progressing in some way.

As much fun as the game is, though, I do have some minor gripes. First, I wish there was a bit more variety in the environments. The most interesting thing you’ll see is occasionally you’ll run through a greenhouse, but otherwise the game is mostly full of metal corridors and elevator shafts. Also, my iPad Air experienced some frame rate drops occasionally, although it was pretty rare. I also wish there was some indication of how far away you can swipe before reaching an obstacle, because currently there’s a bit of trial and error involved and it can take a bit of getting used to.

Overall, though, All Is Lost is a very solid take on the genre. In fact, despite my complaints I’d say it’s one of the most fun runners I’ve played in some time. Coordinating your right and left thumbs with the different swipes and moves can be very satisfying when you pull it off successfully in the heat of the action, and the unique progression system keeps things interesting. I also love the inclusion of the endless mode, though I do wonder if it’s enough to hold the average player’s interest in the game for more than a week or so. Hopefully it continues to be updated in the future with more content, because what’s currently on offer is a very fun foundation that could easily be expanded upon into something even more substantial. Also, the game’s free (with limited ads and an IAP to get rid of them) so there’s absolutely no reason to not give it a try.