It’s time for Super Bowl 50! Starting Sunday, February 8th at 6:30pm EST (11:30pm GMT), the Denver Broncos and the withered husk of Peyton Manning take on Cam Newton and the Carolina Panthers, who are bidding to be one of the few teams to go 18-1 in NFL history, as well as to make sandals with socks officially acceptable. There’s big stakes on the line. If you can’t watch the game through CBS on your TV for whatever reason, well, here’s how to do so on your iPhone, iPad, and Apple TV.

CBS Sports App Scores & News, Free If you’re in the US and have an iPad or an Apple TV, you can use the official CBS Sports app to stream the game. If you have a Chromecast, the app supports that as well, so you can watch it on a spare TV, or however you want to do it. While the game will be over the air, maybe you don’t get great reception or are against antennae for whatever reason. This should work without a cable subscription, too. 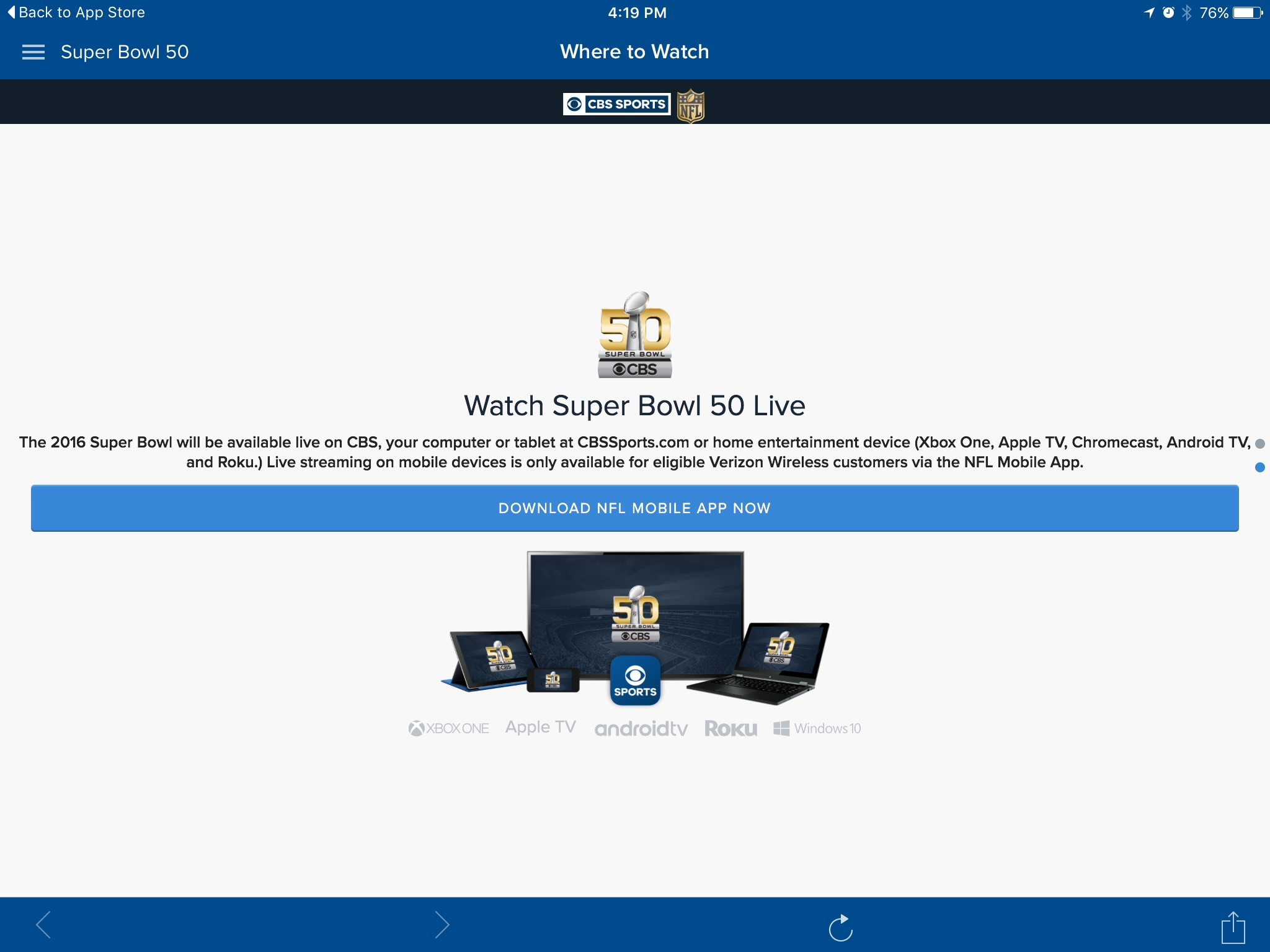 NFL, Free If you want to stream on your iPhone, you’ll once again need to have Verizon to watch because the NFL cares about one thing: money. And Verizon’s paid them a lot to get exclusive rights to NFL games on phones. So if you have Verizon, you are in luck. Otherwise, you’ll need that iPad.

Canada or UK options: If you’re in Canada, CTV will be streaming the game. The CTV GO app will stream the game if you’re a CTV subscriber. If you’re in the UK, BBC Two will be streaming the game. You can watch it through the BBC Sport app. Sky TV will also have the game, and you can get a Sky Sports day pass to watch it on NOW TV, which should be available in Ireland as well.

Everywhere else If you’re outside the US, Canada, UK, or Ireland, you can buy a weekly pass to watch the “big game" live through the NFL Game Pass app. There might be ways around it if you can use some VPNs and get the weekly pass, but good luck. 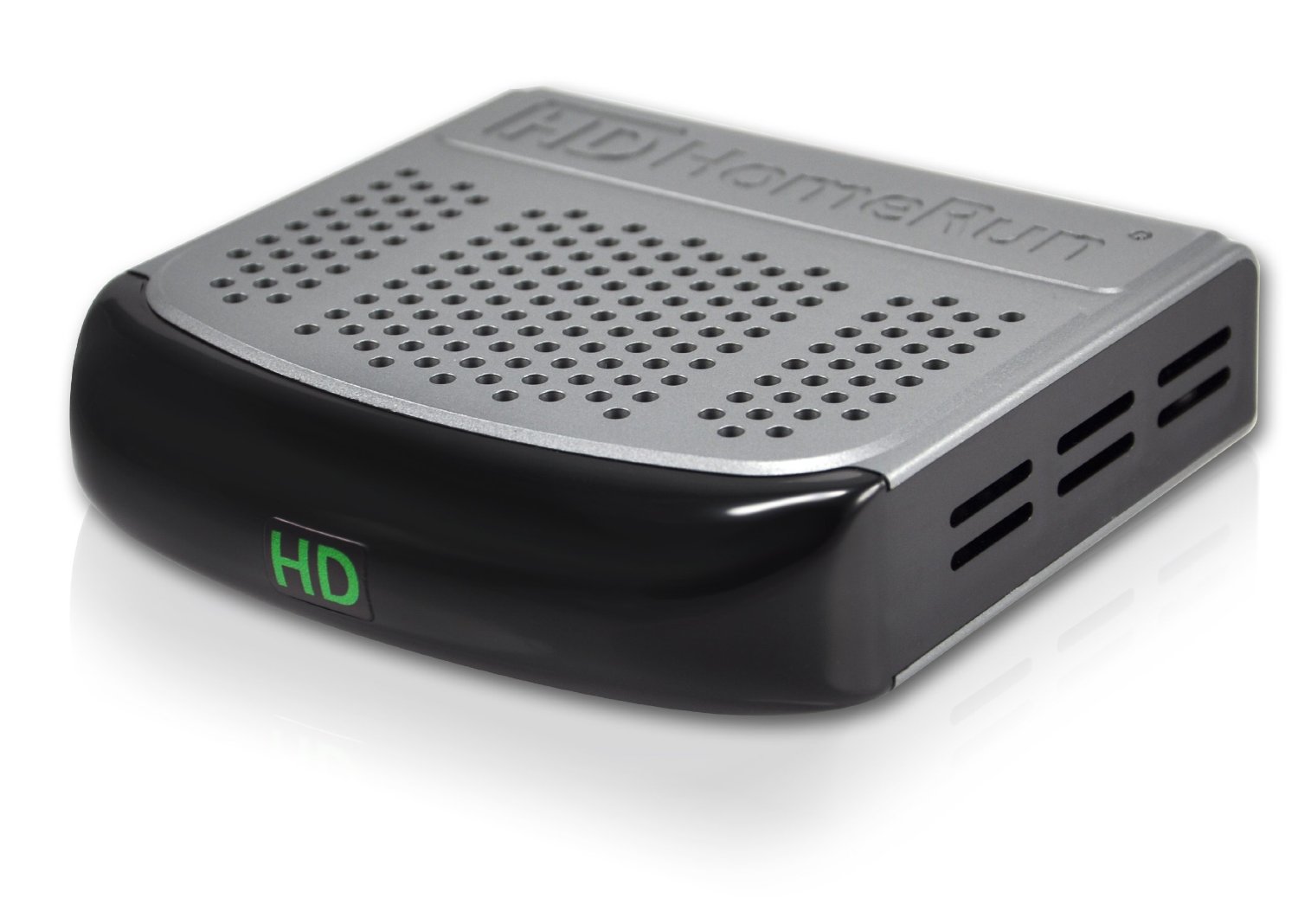 Cut the bad influences from your life that require you to try and watch the biggest football game of the year from your freaking phone. I’m going to say this once again. Iif you’re in a situation where the only way to watch the Super Bowl is on your iPhone, you need to evaluate your life. How did you get here? Why are there people who are putting you in this situation? If you’re working a job where you’re stuck watching the game clandestinely from your portable device of choice, then I absolutely understand, we all have bills to pay. And if you’re at a restaurant or bar, then hey – you’re providing a valuable service. Hopefully your workplace has a TV with the game on. But otherwise? Remove these bad influences from your life. The Super Bowl is the only truly communal event in America that we have left. If someone doesn’t care enough about you to let you watch the Super Bowl like a human being, on the biggest darn screen you got, then you don’t need them in your life. Spouse wants to do something else? Marriage is temporary, divorce is forever. Family keeping you back? Blood of the covenant is thicker than the water of the womb. Find a sports bar, a restaurant, wherever. When the clock hits 0:00 and all the confetti has fallen from the rafters, and either Cam Newton has made all the racists and haters deal with it as he dabs ’em to death, or Peyton Manning somehow realizes that the secret to catching up with Eli is to be as bad as possible (because meritocracy died a long time ago), you can worry about the choices you have made.

Just give up on football: It’s the bloodsport of our time, and it’s destroying its participants brains to a degree that could be horrifying someday when the current generation of behemoths retires. Football is fun to watch, but at what moral cost? Roger Gooddell is a scumbag, too. Do you want to make him even richer? If you can’t watch the Super Bowl…maybe don’t.

If you’re looking to get some football action on before the “big game," or if the Panthers defense has literally smashed Peyton Manning into dust, and you need something to do to pass the time before the end of the game, here’s five options to enjoy some pigskin on your touchscreen.

MADDEN NFL MOBILE FOOTBALL, Free This is the most realistic NFL experience you can get. I say that not just because it’s EA and the Madden franchise, the longest-running NFL series on the market. They know football video games. I say that because much like the real NFL, they are not shy about taking your money, because it’s the NFL and it’s an EA free-to-play game. Much like FIFA 16 Ultimate Team (Free), you can assemble a team based on real-life players, take on friends online, and compete in a number of challenges.

Pro Strategy Football 2015, $2.99 Football is a mind game. And sometimes it’s more fun to just sit back and be the strategizing coach, and see how things work out. After all, it might be frustrating when the computer messes up a play, but is it any less frustrating than when you somehow mess up in Madden? Be the expert here, and show that you know how to manage the clock better than…well, literally ever football coach in the history of the sport. They’re all somehow terrible at it.

Blocky Football, Free Full Fat’s delivered their flicking football games, but this one combines Crossy Road (Free). style voxel visuals with lane-based auto-running, all in a football context. It’s actually a pretty clever little combination, as you try to run back kickoffs and kick extra points.

American Football: Guns & Balls, Free This deserves mention, if only because a game where one person kicks field goals while the other person tries to shoot them down is the most American thing ever. It has online play, too, because shooting footballs out of the air is only more fun when it’s another person’s footballs. It’s a ridiculous, ridiculous concept for a game, and I dig it for the absurdity.