Many 20th century governments have risen and fallen on the power of the word. While sudden explosions of dissent have marked the often-televised end of regimes like Romania’s Ceouseskou in 1989, it was the power of the official or underground press that often initially held these governments in power and fomented the dissent that led to their downfall. And these words in official propaganda or unofficial, subversive propaganda (because any information with an angle is, technically, a form of propaganda) caused suffering and death and ruined millions of lives. That’s why when I started playing The Westport Independent (Free), a “censorship simulator" according to the App Store description, I was expecting my words to cost many lives, my decisions to matter both in terms of gameplay but also in terms of making me care about the lives lost, even the imaginary ones. 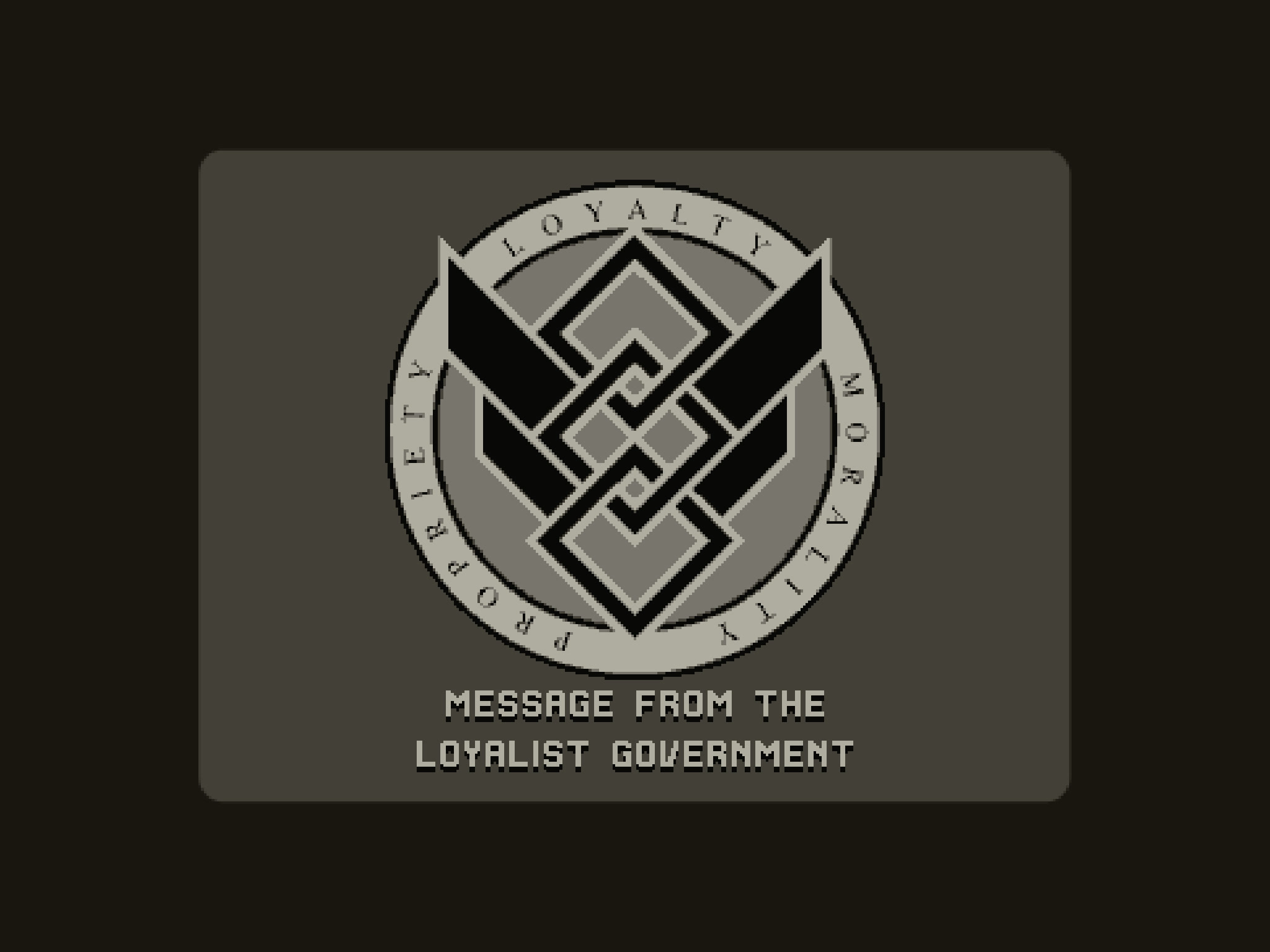 While The Westport Independent is a perfectly adequate censorship simulator with some clever touches (but also a somewhat loose focus), I never really got the emotional connection I was expecting, never really cared that much about the people of Westport, and I feel that this was mostly the game’s fault rather than mine. The Westport Independent also has the misfortune of being quite similar in terms of art and theme to the fantastic Papers, Please ($4.99), and I’m afraid that comparison only heightened the sense of a lack of emotional connection. 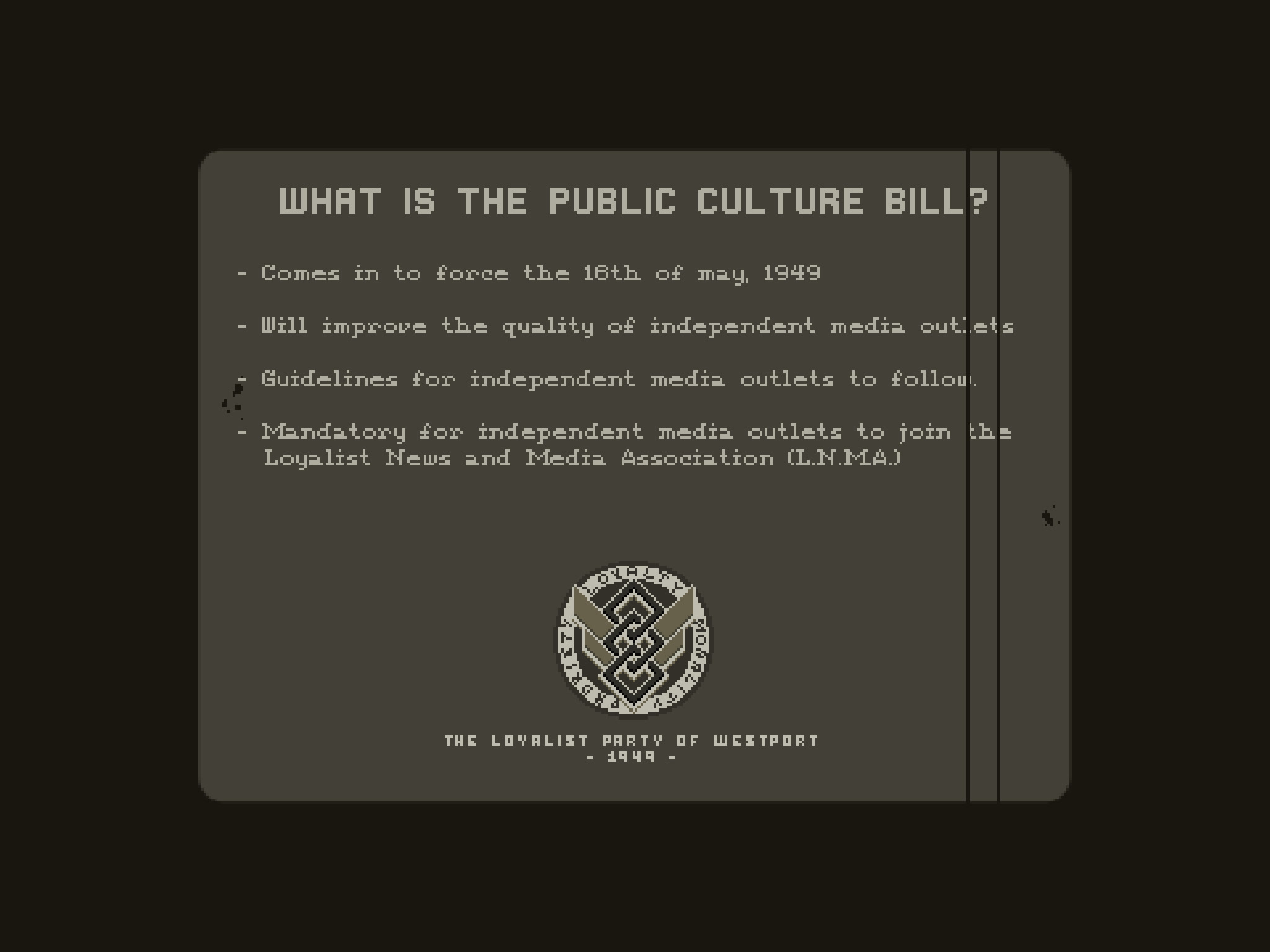 The Westport Independent puts you at the helm of a newspaper with the same name a few years after the end of WW II. The game starts 12 weeks (which act as the game’s turns) before the Public Culture Bill comes into effect. This bill acts as your “game over" moment when all is tallied and you get to see what happened to you, your staff, and your newspaper. Throughout the game, the Loyalist government will try to hold you responsible to the Bill’s guidelines that pretty much come down to selling propaganda to the people, protecting the party’s image, and inspiring morality and propriety. While keeping the Loyalist part happy isn’t really hard – all you have to do is follow the unambiguous instructions you get at the start of the game – you’ll also have to avoid enraging the rebels who support pretty much the opposite of what the Loyalist party stands for. 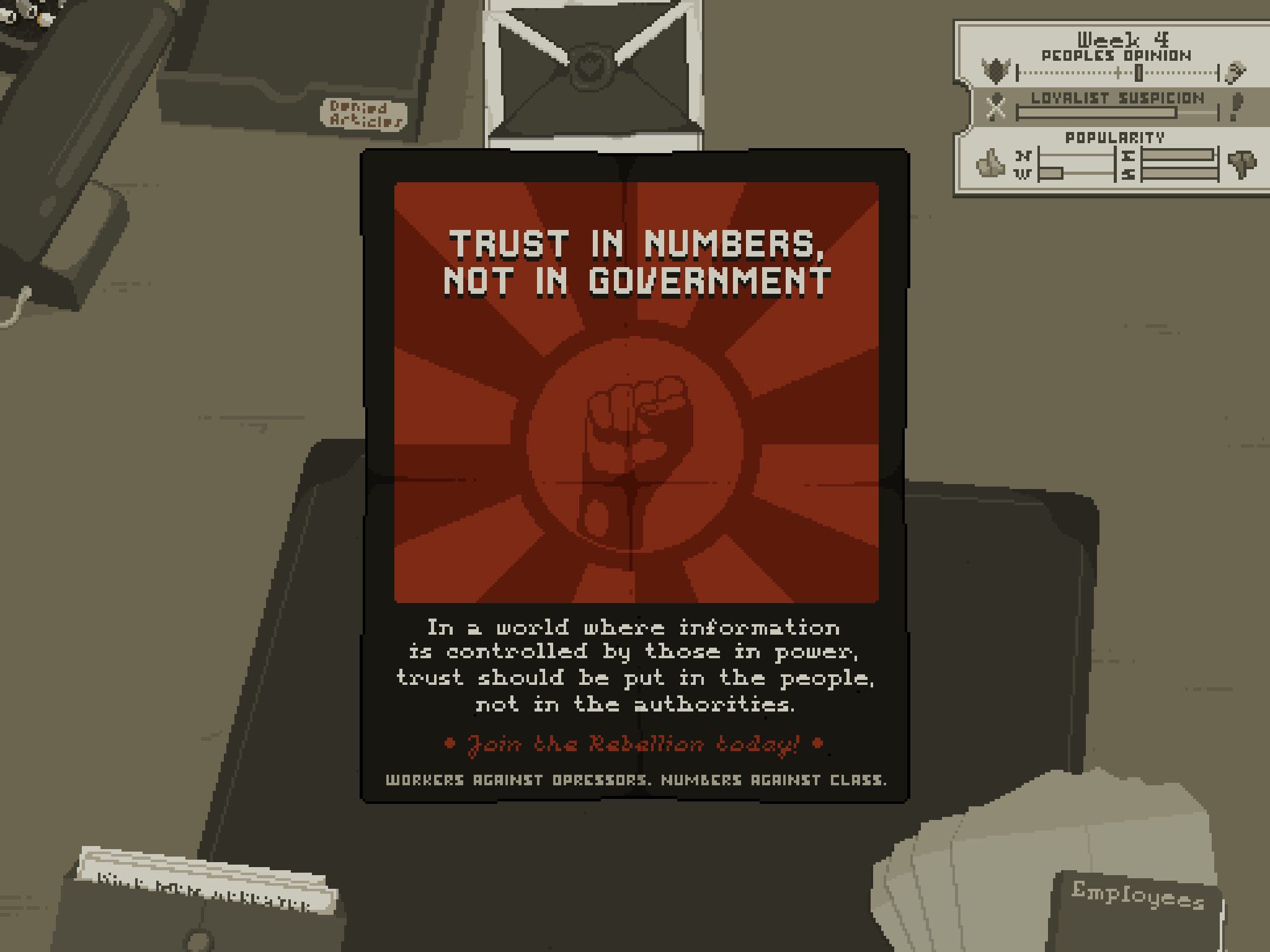 Here in a way lies part of the reason why the game failed to really grab me. I was given no real backstory on either the Loyalists or the Rebels – or Westport for that matter – so the various entities in the game fail to become anything but cardboard characters; one side is the oppressive, totalitarian regime and the other side those who’re fighting against it. How we’ve come to this historical moment, what precipitated it, how ruthless was the regime, what are the rebels fighting for exactly, I know little about all that outside how they are on opposite sides. 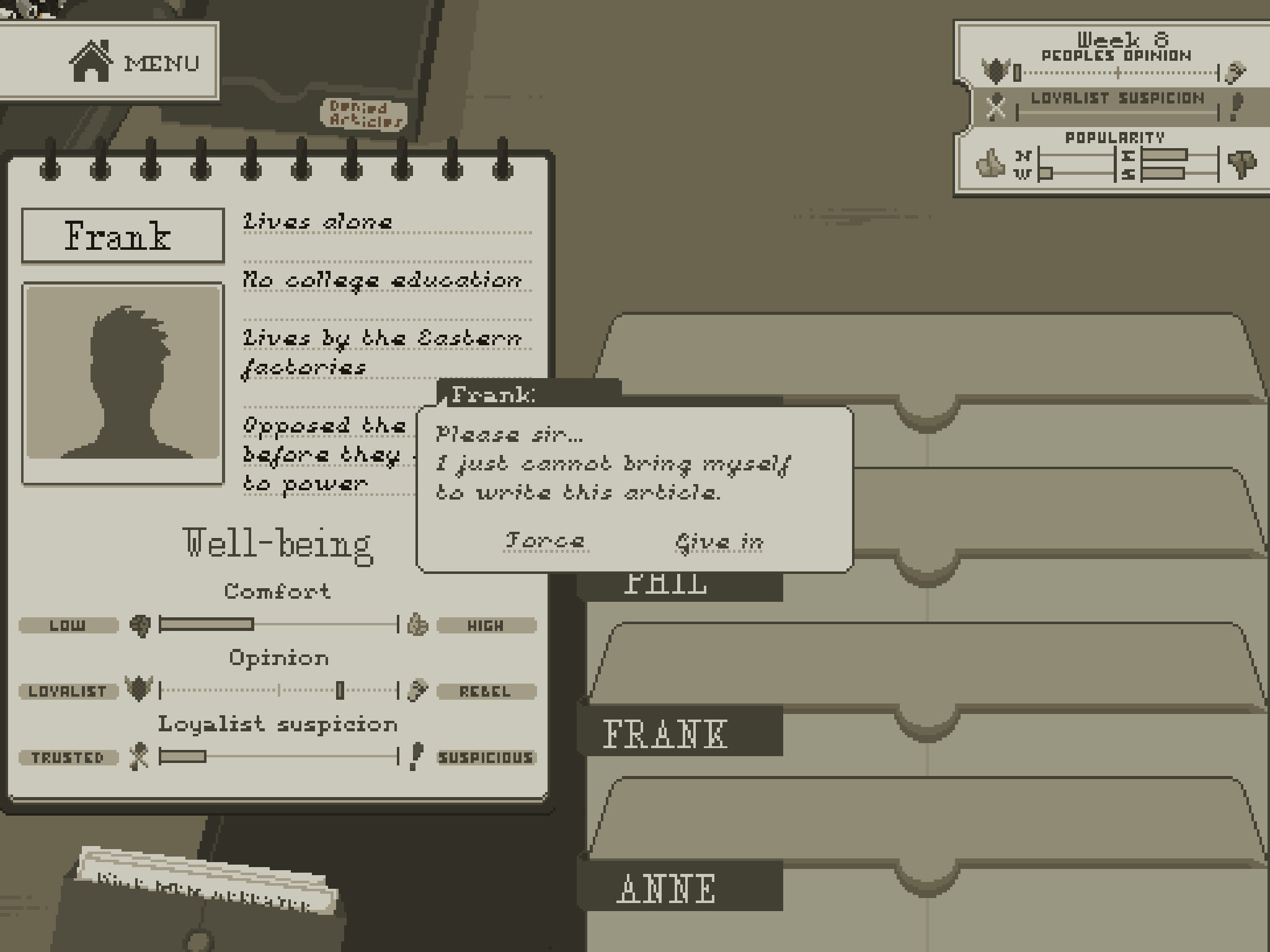 Same goes for the staff of my newspaper, Anne, Phil, Frank, and Julie, all of whom fail to turn from a few bio lines in their files into fully-fleshed characters. The developers tried to humanize these four by inserting short sequences between each week/turn where they sit around a table and chat about the state of the city and Westport’s political situation. While this was a smart idea, it doesn’t really work that well because the dialogues are pretty limited (you’ll see them repeated even in the same playthrough). To add to this, the dialogue more often than not fails to reflect your actions and the current state of your propaganda (or subversion) efforts. Occasionally, the dialogue works well but overall, this was a wasted opportunity to make them more human and, so, more interesting. I mean, they are even represented simply as outlines, which really doesn’t help shake the feeling of how flat they are as characters. 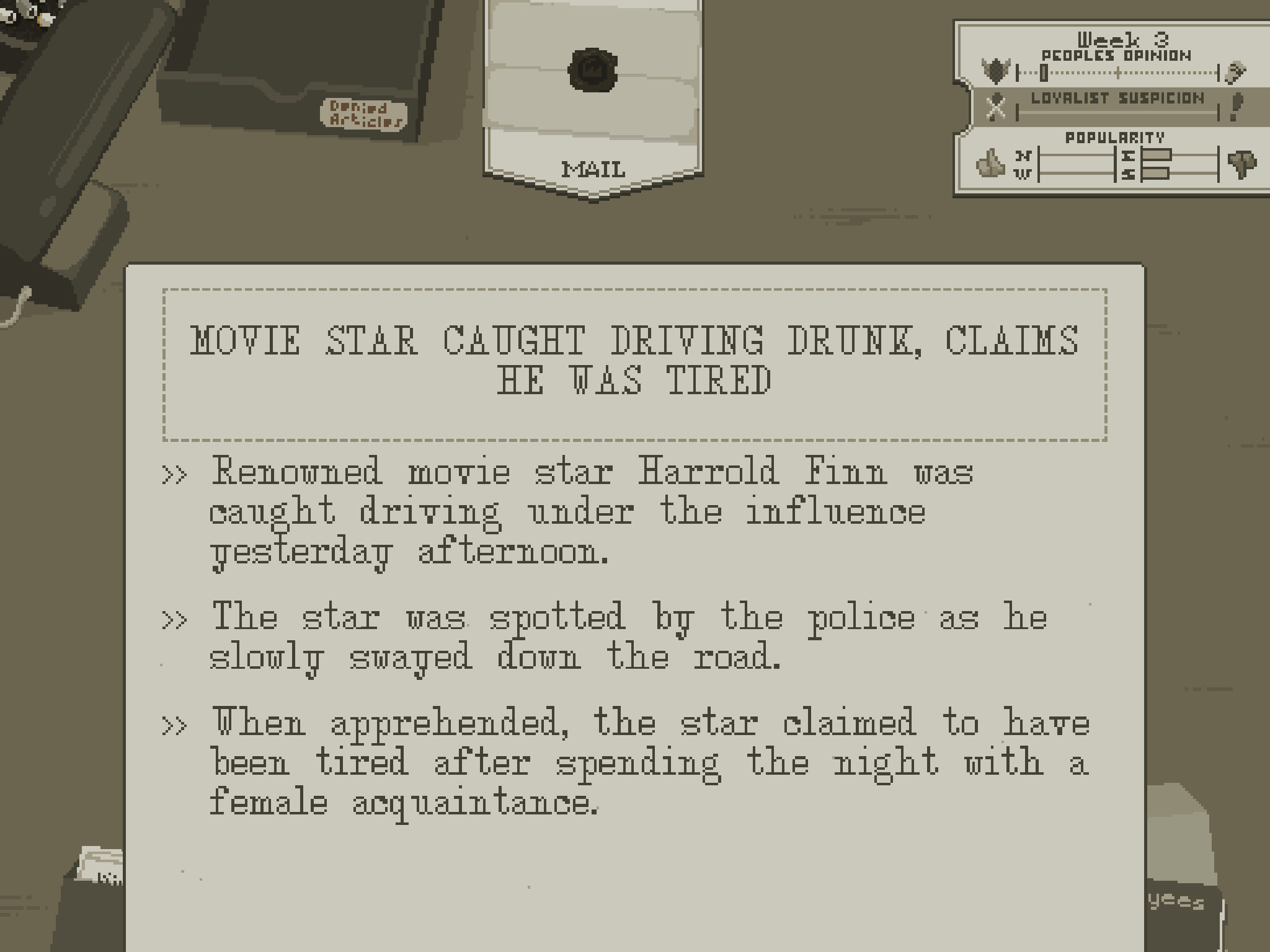 In terms of gameplay, your job at The Westport Independent mostly revolves around “gently" editing various news stories to suit your chosen direction, either pro-Loyalist, pro-Rebel, or balancing the two. You have a number of stories each week, and you can censor any number of sentences out of the four or five found in each text. You can even change the title to match the message you’re trying to give your readers. While at the start of the game I felt drunk with power and felt like I could twist people’s minds at will, I soon realized that my censorship power was on the limited side. For instance, there are only two possible headlines for each story, and each unambiguously supports either the Loyalist or the Rebel side. 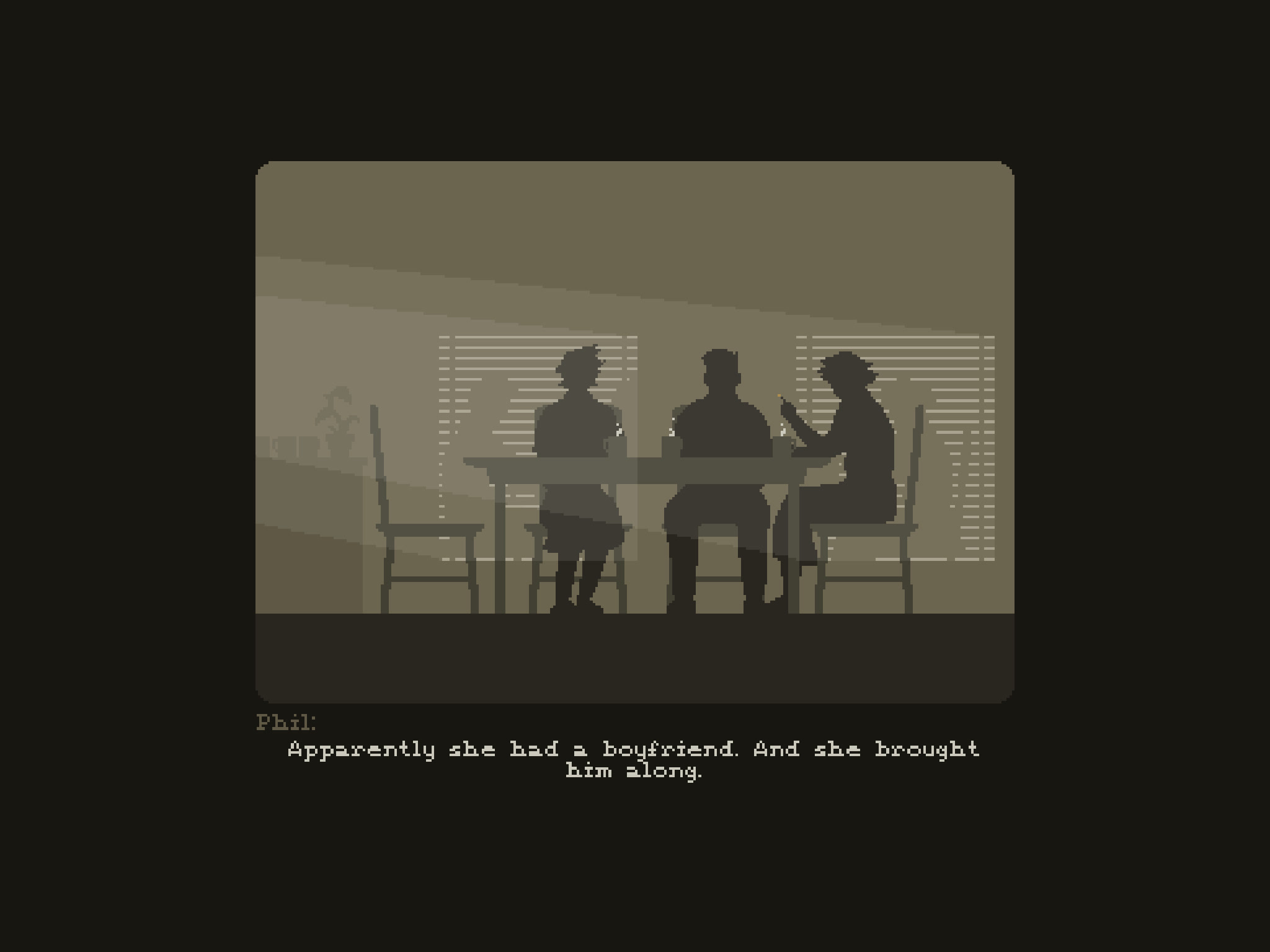 Same goes for the various sentences I could censor. I could easily see which ideas would be a problem to which side, and so there was no real pressure to try and figure out the unintended consequences of my censorship. The only moments the game caught me by surprise was for instance when a company threatened to sue for libel. While this was an entertaining moment, it really wasn’t that interesting in the contest of the game because in a censorship game, I care more about the government and the rebels rather than the industrialists. 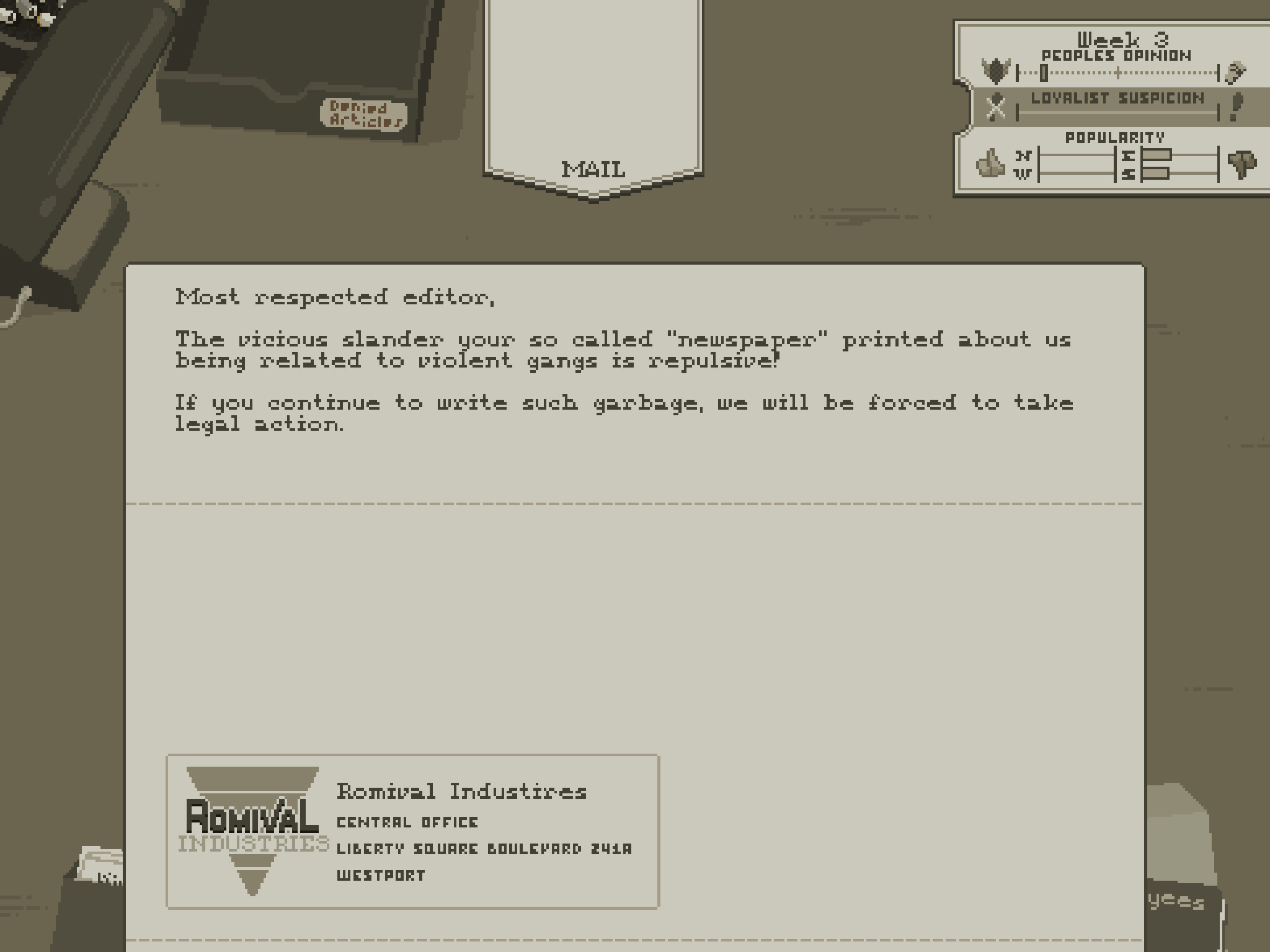 Yes, part of the scope of the game is to simulate the economics of trying to run a paper while simultaneously occupying a very tenuous political position, but that for me added nothing more than just uninteresting busy work. You can decide which of the four districts to run more ads in as you attempt to increase circulation, but it felt slightly disconnected from the rest of the game. What would you rather do, censor a news story while worrying it might get your reporter killed and your life threatened, or worry about whether you’ve put enough celebrity stories in your newspaper this week? This is an example of how I felt the game’s scope was too diffused, and I’d much prefer if it had a tighter focus on the censorship aspect of the game. 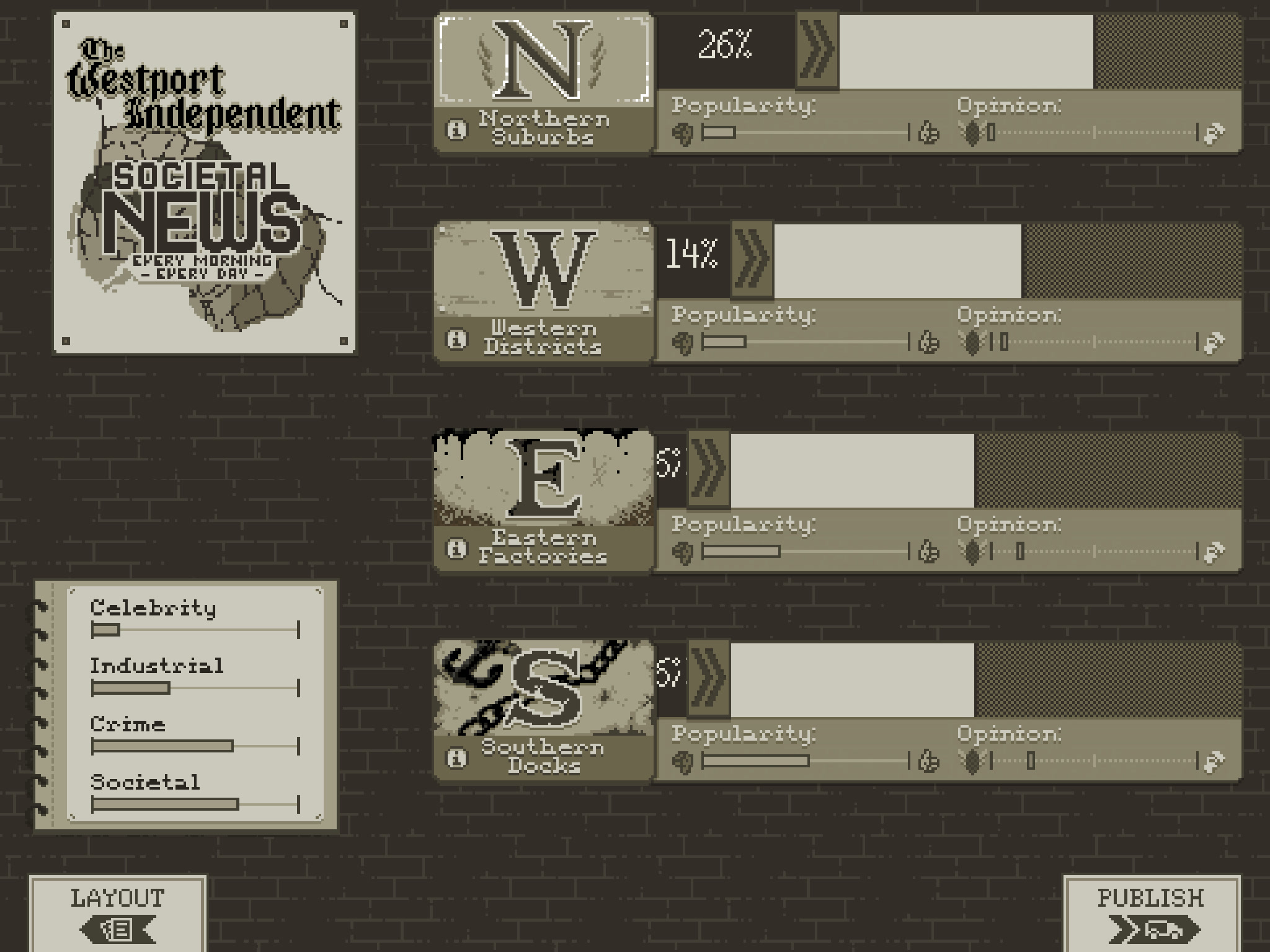 While the review so far might sound negative, I actually didn’t have a bad time playing the game. Even though you can easily play the system and make it through the 12 weeks unharmed and barely threatened, it’s still entertaining to shape stories to fit your political needs and trying to see just how long you can besmirch the government before you are done for. The game’s visual fit the moody tone of the game as does the music, which I found quite charming in a sad kind of way. The 12 weeks do go by a bit too quickly, and while there isn’t that much of a variety in terms of stories and events, you’ll still enjoy playing the game a few more times before seeing everything it has to offer. 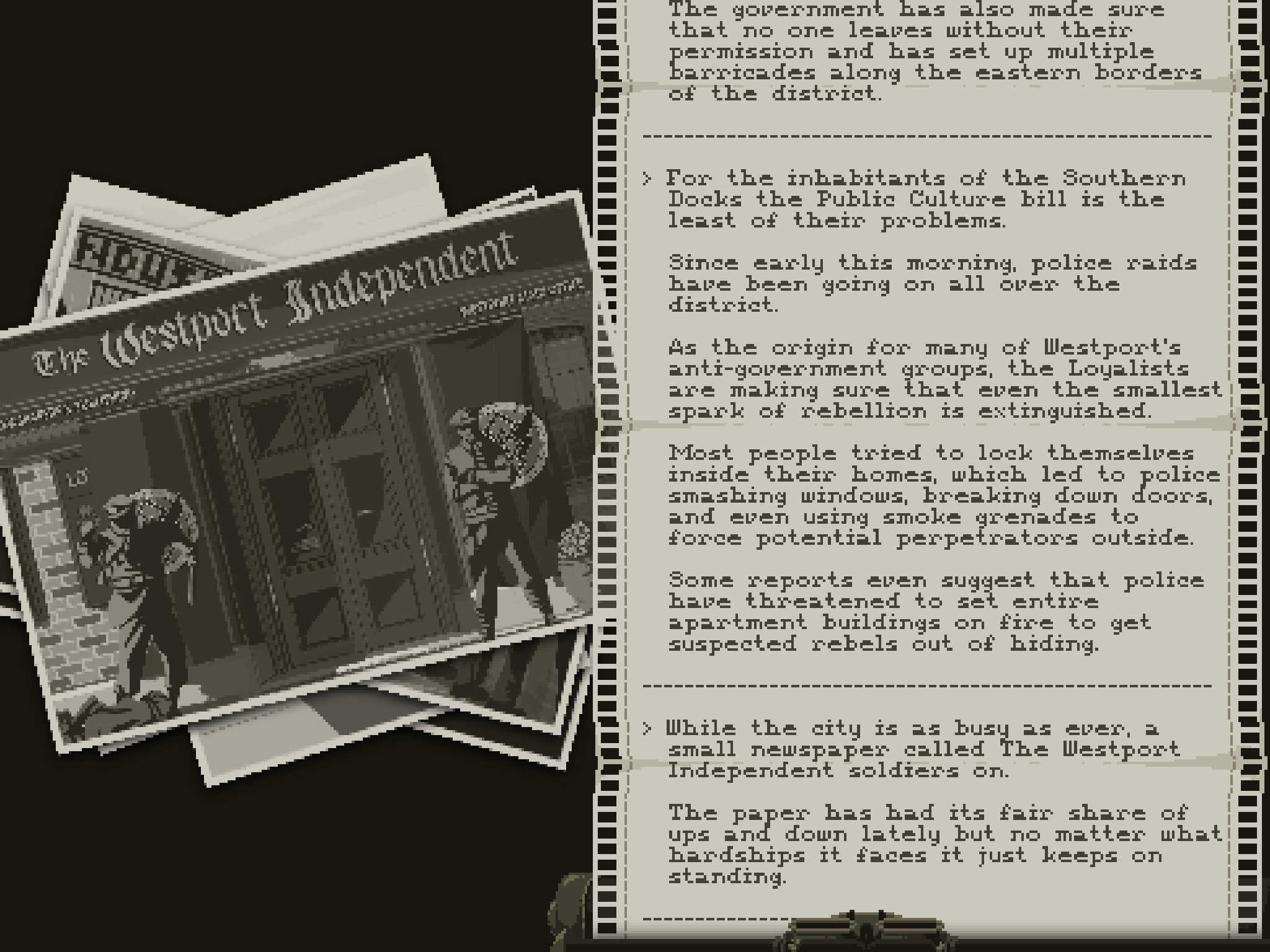 So yes, while The Westport Independent doesn’t tug at the heartstrings as it could have and doesn’t present you with as difficult ethical choices as it could have, it’s still an entertaining game and the kind of game that we don’t often get on iOS. If it had tightened its gameplay focus more on the censorship side of things and made the outcome of my decisions harder to predict, The Westport Independent would’ve been a must play for anyone who enjoys games with a political tinge. As it stands, it will still offer you an interesting gaming experience but one that will feel slightly on the short and unremarkable side.